One of our team captains made the all-state soccer team. (Congrats, Zack!)

In fact, a lot of our kids balance robotics and varsity sports.

There have been many mechanics based off of real sports

I’ve wanted a football game (always imagined it to be shooting) for a long time, but I really hope that’s not what the 2021 game is planned to be.

Introducing a unique type of game piece that has to be shot and acquired in a novel way requires teams to do more prototyping than if it was a simple ball game, which will drive up costs for teams. At minimum, if there’s going to be a unique game piece (eg. 2017 gears or 2019 hatches) I would hope that it’s a pick and place style game that would not require teams to prototype a shooter separately from an intake.

I’m wondering, did star wars sponsor us again or are we just extending the previous donation.

This is a huge question that would help determine quite a few things. Is FFC forcing them to have their name on it so their donation $ provides the ROI, did FFC make another donation or is it a mix of the two?

My personal opinion is that there will be a game that has similar scoring mechanisms. And a rule change that for one year only allows for major subsystems from this years robot to be used next year. This would allow a struggling team to reuse their existing robot with some modifications and survive instead of having to close up shop. Personally I think the well resourced teams will build a completely new robot because they will want to do that and try to improve their craft. And if the traditional build season gets shortened due to everything, which I think is a real possibility, this would allow everyone a way to get a robot out onto the field.

What happens if as a new trend for first one of the three challenges are recycled each year to make the game easier to follow by casual observers.

Could we see an Infinite Recharged game where the Power cell shooting objective is maintained but we get a new challenge for the second and third game element?

How does it change the game if we are playing IR power cell shooting with Rebound Rumble’s balance platforms in the middle of the field(and endgame scoring) and one other challenge?(maybe building up the middle bar so you had to cross centre over the platforms or had to pass the ball to a teammate) That change in the field would take some things teams have learned and let them reuse them(shooter) but force teams to rethink their concept in drive bases.

Does FIRST then maintain this year after year by keeping one challenge and changing the other two?

I’m not sure that’s a totally valid comparison. It wasn’t until senior year of high school that I figured out that the teams switch sides after every goal in football (and I was in marching band). I still have no idea what a “down” is. And then there are things out there like cricket.

I totally see your point in that people may not know sports just as much as they may not know the object of a specific year’s FRC game. What I meant in that statement was that FIRST would most likely try to emulate various aspects in sports such as shooting a ball into a goal(yes I am aware this was 2010’s game and that this has been done before by FIRST). The reasoning behind this is that even though sports are something that take some time to understand, more often than not, people will tend to understand them better than compared to games like IR where there was the whole stages aspect involving the control wheel.

I think the idea of simplicity for scoring is actually a really good one. The last games really focused on having something for everyone to do, but have created a scene on the field where spectators can’t watch what is really important.

To contrast some games over that last few years I would rank Arial Assist as a really good spectator game. You could pretty easily explain the scoring system to an onlooker and they could watch the action and know more or less how the game was flowing.

Power Up was a really good game for ease of watching scoring because there was only really one scoring mechanic before end game.(ignoring trying to explain Power Ups to anybody watching)

In the third image we see Steamworks. Not a very crows friendly scoring system. 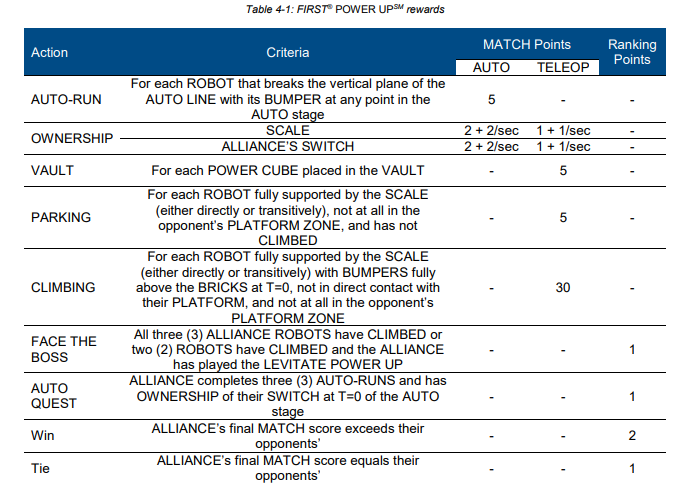 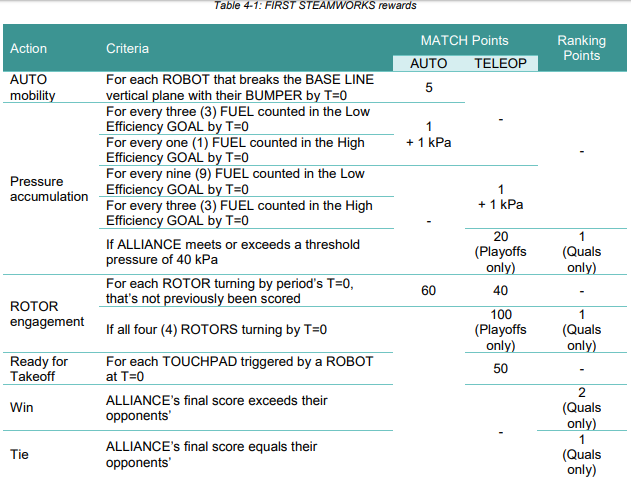 Now let’s compare Soccer. If the ball crosses the goal line you score a point. Baseball - did you touch home plate? Yes, point. About as complicated as you get in sports is Canadian football where you can score 1,2,3,or 6 points depending on the type of play (the 1 is called a Rouge).

The fact that there is limited scoring potential, which i think Power Up did very well, is what makes sports dramatic and why I could see FIRST going towards that sort of model. In sports studies terms this is the shift between sport as a spectacle(for the fans), versus sport as a festival(for the competitors).

I’m pretty happy with what Tyler had to say. I think this Game Changers thing is a lot deeper then we think.

FIRST doesn’t have to ruin the program just to cater to the audiences. I really don’t want to see a slightly/same different game year after year with a slightly/different same robot year after year. If 2021 has to replay fine (I think it won’t) but I really don’t want to see the program head that direction. Games can be simpler but I’m not a fan of the “patches” theory.

Consider something like Formula SAE or Robosub in college. Do the “challenges” change from year-to-year? No! The competition fundamentally doesn’t change, but we still design, build, and test new cars every single year and it has always been a great learning experience for all team members. My point is, the competition doesn’t have to change to obtain a meaningful learning experience. Cash-strapped teams can opt for a two year development cycle, while others can continue building a new robot every year. Just my 2c.

There’s also (sort of) a robotic football league at the collegiate level that is slowly gaining traction. It started at Notre Dame and now has 10 universities involved. https://collegeroboticfootball.org

Consider something like Formula SAE or Robosub in college. Do the “challenges” change from year-to-year? No! The competition fundamentally doesn’t change, but we still design, build, and test new cars every single year and it has always been a great learning experience for all team members. My point is, the competition doesn’t have to change to obtain a meaningful learning experience. Cash-strapped teams can opt for a two year development cycle, while others can continue building a new robot every year. Just my 2c.

Heres my take,
Formula cars all look the same because we already know what design is proven. FRC on the hand is different because we get a new challenge with different goals every year allowing us to design for those new challenges. Doing the same thing year after year would be boring. The robots would become all just about the same with minimal slight upgrades year after year. No design challenge. No need to rebuild a robot if last years is fine just swap out the CIMs for falcons or other minor upgrades. FIRST is unique with a new challenge every year and probably wouldn’t work near as well without it.

Take tombstone from battle bots the design is mostly the same since they released the original back in 2004. Sure they do minor changes overtime but really nothing too exciting. Battle bots is a competition. While FRC has a competition, it is also a design, build, and programming challenge.

In short, I feel that one of the bests parts of FIRST is that we build different robots to accomplish different tasks every year.

I feel like what I said may have been misconstrued.

I don’t think FRC should keep the entirety of the game each year, just one element.

For example, let’s say Game Changers introduces a game that has Infinite Recharge style ball shooting alongside a balance board challenge and , for the sake of argument, a Kinect Based Hybrid mode auto period. That challenge, while maintaining one piece of the prior year’s game is fundamentally different from the previous challenge, despite having one similar element.

The following year, the game would then retain one of the challenges from the prior year, while changing two others. This allows team to iterate on one part of their bot, while redesigning the rest.

Sports involve teamwork, working to move a single game piece down the field together. Not since Aerial Assist (best game ever) have we had a challenge where teams work together like that. I wonder if that is in the thought process?

Take tombstone from battle bots the design is mostly the same since they released the original back in 2004. Sure they do minor changes overtime but really nothing to exciting. Battle bots is a competition. While FRC has a competition, it is also a design, build, and programming challenge.

Paul isn’t really active on CD, but @cory @Travis_Covington, you guys work with Bite Force, right? How much work goes into redesigning between seasons? Is it a good engineering challenge or is it largely just copy/paste?

Very little between the 2018 and 2019 seasons. It’s all about improving reliability of things at this point and building up spares. There are iterative changes that could be made that would give more flexibility/possibly improved performance/reliability, but they would also be risky. Particularly given that there often isn’t a ton of time between when battlebots makes the next season official and the start of filming for that season. That’s compounded by team members being busy with work and FRC build occupying the majority of that time between confirmation and film start.

Some teams build at risk (either risk of not being selected or that they will have sunk major amounts of time and money into a robot for an event that doesn’t end up happening). That’s not something our team has been willing to do, which makes it very risky to make big changes in a small period of time.