Hi Guys, I’m trying to figure out this problem I have, see attached photo. So I have a SS304 beam that will bend up to a max of 5mm but what I need to find out is what force will cause this deformation. I have selected the below equation as it seems like the closest fit and from the maths I have done the result seems to b2 3.2N/mm ^2. Can you guys comment firstly on if this is the right strategy and secondly is my math’s correct. Thanks for the help! If you need more info please let me know. 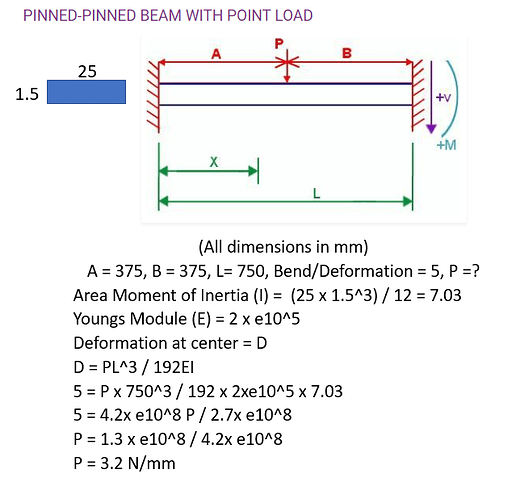 First comment: N/mm means there’s something wrong somewhere. You want to end up with units of N (Newtons for those not as familiar with the metric system). If you end up with units that don’t match what you’re looking for, go back through your work, paying extra attention to units. (Fortunately… you’re in metric already.)

All right, now we go through the rest of the problem. produces beam table It’s a pin-pin, though your drawing is fixed-fixed. Fixed-fixed is a really nasty loading condition, and generally isn’t covered in undergrad courses. Additionally, it’s an even distance, which means simpler equations.

A couple of quick notes: The - sign in the equation I placed is reflecting that P is a downward force. See also vectors. Your engineering professor will probably call this one out… But it doesn’t really matter because D is also negative, so they cancel out.

The other thing to note is that I bolded a specific number in the deflection equation. I’d like to know where you got the matching number in your equations…

For those high school students following along at home, wondering “what is this sort of thing, I haven’t seen it yet?”: you’ll get there, roughly 2nd year of college when you go through engineering mechanics and learn about beam equations. Yes, you can do the math as a high schooler–it’s algebra–it’s understanding what lies behind the algebra that takes little longer.

Hi Eric, thanks for getting back to me. For this application we are using a metal band that wraps around another part. The band is unsupported in the middle but is fixed/held in the corners. Therefore the fixed fixed set up is the most applicable in my opinion. Now I’m no expert on these formulas but when I go to google fixed/fixed with center point load the formula that usually pops up includes the 192EI rather than the 48 EI, see below. Also if we do your calculation the result comes out to be 0.8 N’s approximately. To be honest even my earlier result of 3N’s seems quite low. If I just imagine a stiff SS beam and I sit 3 kgs on top of it, I would not image it would move the beam even 1mm. Have I made an error with my units? Because I’m using mm’s should my result be KN’s ?

Fixed-fixed… as I noted, that one is difficult.

The equation I used was the pin-pin, specifically because your diagram stated pin-pin. It will need less force to move.

That’s the other thing I was going to say last night: always do a “gut check”. If a number feels off, recheck. In this case, a SS ruler, about 200mm long, flexed the required amount with relatively small force. This one’s a particularly easy check with a ruler…and I suspect that it’s just a units error (one of the mm’s didn’t properly cancel), not a value error.

OK this is becoming clearer for me. In that case I believe my initial calculation is somewhat accurate. The reason I’m hesitant on the result is that at some point the beam/strap will come under tension. See below the graph explaining this. In this case we will see 30 kN’s stretching the assembly which will stiffen the 4X straps in the assembly. This tension I assume would make it much harder to deflect the strap and thus the force needed to do this will increase. Do you know how I would go about calculating the new force? 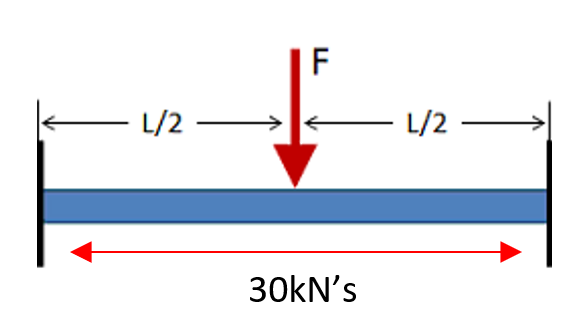 So, first, a note on end conditions: “fixed” means that the end in question cannot move at all. “Pinned” allows rotation but not linear motion. “Free” is unconstrained; sometimes “roller” is used instead to restrict rotational motion. What you’ve described sounds like a roller-roller condition rather than fixed-fixed. I could be wrong.

Now, on to your next question. Yes, that force will make the pull force to deflect greater.

First step: distribute the load. (Divide force by 4, because you have 4 straps.)

Now, I’m starting to get out of my depth a bit, but I’ll give you some hints that may help. First: truss analysis often puts members into tension or compression. Second: a CAD software with stress analysis should be able to help if you want to try doing this experimentally. Third, don’t forget your free-body diagrams…

You need to know more about what your system is doing. You need the “back of the envelope” calculations that get you within an order of magnitude of the -actual- system.

For a First approximation, assume you HAVE deflected the 5mm you want, and assume the beam crimps at the middle. IE it looks like two straight sections. Use geometry to figure out how much longer it has to be to reach that geometry. Stress in the strap is is the strain (delta length) times the elastic modulus of the strap. Stress times the cross sectional area of the strap will give you a force.

Check if the stress is below yield Stress for thr strap.
Check if the force is so high that your supports move…

I’m not actually going to add anything about statics because I don’t have my textbook with the proper equations available at the moment. But I have to say this sounds like it could be an XY Problem, where you’re having trouble implementing your difficult solution to the problem rather than asking the best solution to the problem in the first place. What is your goal here? What are you trying to accomplish with the answer to your question?

I mostly agree with you, however I would say pinned-roller is more accurate as the boundary condition here. Roller-roller allows for free body motion which makes analysis more difficult, and there shouldn’t be any difference in results between roller-roller with horizontal forces applied at each end and pinned-roller with the same force applied only to the roller end. You might even find this case online, though I haven’t found it (didn’t look very long, admittedly).

However, pinned-roller might not be the most accurate boundary condition here either. @Noel.Farrell I assume this strip is clamped in something like a vice that is then pulled sideways. Is the clamp allowed to rotate, or is it forced to stay horizontal (on a rain for example)? If it is allowed to rotate, then pinned-roller is the best boundary condition to use. If it isn’t, which I assume is the case, then you have a special boundary condition here that I don’t thing has a name. Each end of the beam is allowed to move horizontally, but it can’t move vertically ant it can’t rotate, plus a horizontal force is applied at each end. We can turn one of these forces into a fixed BC (to prevent free body motion; again, this makes no difference in results), but the other end remains “weird”. This you probably won’t find in charts .
I wrote an FEA beam solver designed for exactly this kind of thing (well… more complex things, but still), I’ll get home soon and I’ll analyze your case.
You can do this in a CAD solver like @EricH suggested as well, but try to use she’ll elements or even beam elements if the software allows, this kind of case doesn’t really work well with 3D elements (it would just take a lot of them). Also, think how you can replicate this boundary condition in the software. Most of them - especially solvers in CAD software (as opposed to independent software designed solely for FEA) - won’t have a single button that replicates this boundary condition.

You can look up the energy method for calculating beam deflection and forces. I don’t fully remember the method but I remember it being not-too-complicated for simple cases like these. This method will allow you to calculate the forces and deflections analytically (a lot of these beam charts are based on the energy method).

Edit: didn’t think about this in-depth enough before I made promises. Because the deflection is vertical and the stretching force is horizontal, a linear solver (like mine) will show that there’s no difference between a stretched strap and a non-stretched strap. Same goes for a CAD solver. This is because there is no coupling between orthogonal directions in these solvers. Linear solvers assume small deflections, and if the deflections are small enough, stretching the strap in one direction will have no effect on another direction - the stretching helps by making it less energetically favorable for the strap not to be straight, but if the vertical deflection is small enough, then it wouldn’t have a significant effect on the length of the beam, and so the horizontal stretching wouldn’t change anything. Point is, you need a non-linear solver (which, as far as I know, CAD software doesn’t have; you would need FEA-specific software like ANSYS or ABAQUS).
Honestly, though, there might not be much value in that. A 5mm deflection in the center of a 750mm beam results in an angle of less than one degree. That’s a tiny deflection - small enough for the small-deflection assumption to hold. If the linear calculation (which is what you did in the original post) says 3.2N, the 30kN stretching won’t suddenly change the force to 1kN. It might add a few Newtons but not much more than that.

(By the way, my linear solver confirmed your calculation of 3.2N)