According to R1, minor protrusions, not exceeding 1/4 of an inch, are not considered part of the frame perimeter. We have a frame on the robot which has the same dimensions as the chassis, but there are gussets and bolt heads on each side to hold it together. They are each less than a quarter of an inch, but combined, they come out to add close to a half inch to the total width. There is a debate in our team about whether they combine to create an protrusion that is too large, or are separate and are in accordance with R1.

The bolt heads, assuming they are 1/4 of an inch or less, would count as minor protrusions. The brackets would not, and therefor be part of your frame perimeter.

Photos of the situation would help the Robot Inspectors that follow CD give you some guidance. 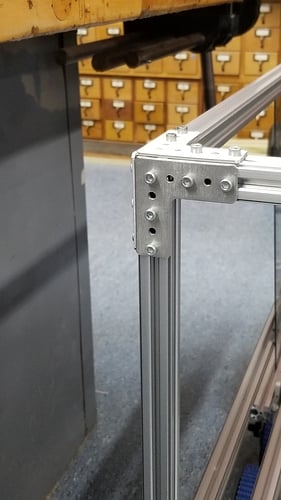 The gussets themselves do not make it illegal(since they look less than 1/4 inch), but with the bolt heads the gussets+bolt head probably make it more than 1/4 inch. Flat head bolts may solve your problem(bring it under 1/4 inch), but you could also try using some of these since they would fit entirely inside your frame perimeter. This would also make it clearer to inspectors that there is no protrusions.

Question: is this picture showing the part of the frame within 7.5" of the floor? If it isn’t, it’s actually worse than you might think.

You could be looking at a Starting Configuration violation.

Now, if it is in that zone, the gussets will define the Frame Perimeter. That could have a definite painful impact if you’re close to maximum size.

Gussets/plates are not minor protrusions. This can best be seen in Q&A 212 - while it talks about polycarb, not aluminum, for the purposes of the rule and your question, it’s the same thing. The bolts are not an issue, those are minor protrusions.

So those gussets need to be inside your FRAME PERIMETER. If they are within the BUMPER ZONE (0-7.5" off the floor), then they would define your FRAME PERIMETER. If you’re under 120" with them, then no problem. Mount your bumpers over them, and you shouldn’t have a large gap (See R26) anywhere, as the gussets are relatively thin. If you aren’t, however, then you’ll need to figure out a solution, likely meaning you need to make the robot a little smaller or develop a way to attach them that doesn’t require those gussets.

If those gussets are NOT within the BUMPER ZONE, then as @EricH pointed out, your problem is not with R1, but rather R2. If you have room within the 120" FRAME PERIMETER measurement, the easiest way to solve it would be to add plates within the bumper zone to match the ones higher up on the framework of the robot. This would increase your FRAME PERIMETER a little, putting the gusset plates on the perimeter, instead of outside of it. If you don’t have room, then you have the same problem as above - you need to either shorten something so you have room to do that, or you find a different way to mount everything together.

One more thing to consider. FRC games involve a fair amount of banging around. That nice, square framework is likely to become a non-square parallelogram at some point… and that could put it outside your frame perimeter. Please take steps to prevent that - adding diagonal supports can help ensure everything stays square.

I hope this helps… if you have more details, including measurements and locations of different parts, I’d be happy to help find the simplest solution that’ll get you legal quickly.

It would also be a good idea to make sure you are at least an inch or more under the frame perimeter limit and to measure the actual value. Some teams have had problems due to measurement errors when they were too close to the limit.

Thanks for the recommendations and information, everyone! The technical team is working on it, and I’ll reply with any further questions/concerns.