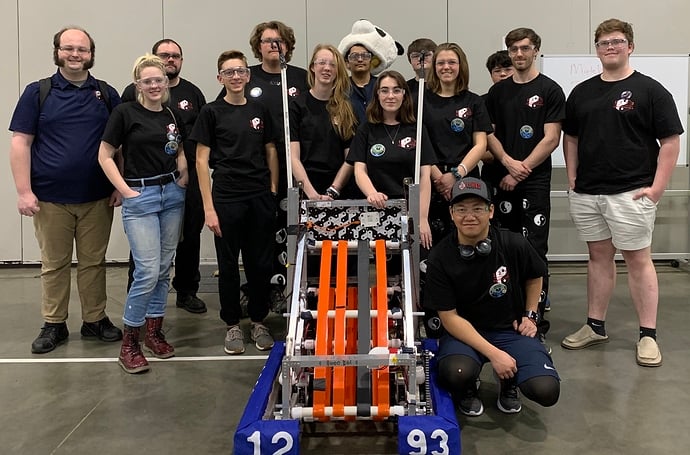 With our season clearly over (we had to tear down the shop and put it in storage for the summer yesterday without the help of the kids who are prohibited from being on campus), I definitely want to make sure this goes on record for posterity.

The Pandalorian is our 17th robot, and is a testament to tenacity.

The original concept was a high-goal shooter in the vein of FIRST Capital, with alterations to let us clean out the gobs of AM14U belts we’ve stockpiled over the years. Around the end of January, a cold-eyed review showed we were not likely to get the performance we wanted in that model. With very inexperienced programmers and very experienced drivers, it made sense to try a simpler plan. February was a pivot to dumping in the low goal, modeled off 2815’s 2009 robot Cocked and Loaded’s conveyor system with twin tightly-spaced drums at the end.

This robot was not operational on the Monday before Palmetto due to wiring difficulties. The climbers were rough and untested as we loaded into Myrtle Beach. Wiring even cost us a qualification match where we were favored (it’s tough to win when you’re bypassed for no roboRIO power). And sometime between our last match Friday and our first match Saturday, one of the upper belts failed.

Even through all this, The Pandalorian finished with a record of 7-2 at Palmetto, good for 8th of 63 teams competing and our third straight top-10 qualifications run. For the first time ever, we were a first-round selection (by Alliance 5 captain 1708, joined with 3492). And for the third event in a row, we were out in quarterfinals. Maybe eventually we’ll finish off the Cinderella stuff, but three straight regional playoff appearances is a marked improvement after seven years away from Saturday afternoons.

Two main efforts were underway at the time the season was suspended:

South Carolina schools were shut down on March 15 with lots of uncertainty about whether that would happen, so our preparations were frozen in time. Still, this rear-side photo should give you a better view of the yeet drums and a sense of how the intake arm was going to go. 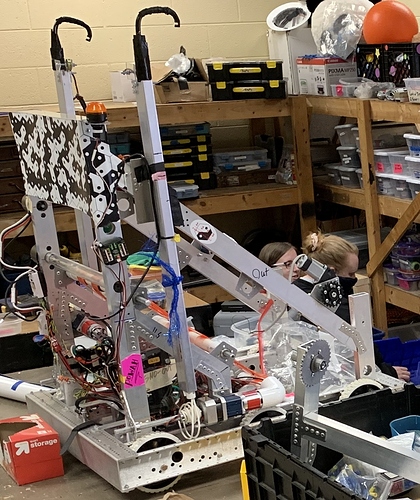 I don’t know when we’ll be back in the shop or on the field again, but I have absolute, unwavering faith that we will.