FRC 1923, The MidKnight Inventors, are proud to present our 15th year robot: Singularity 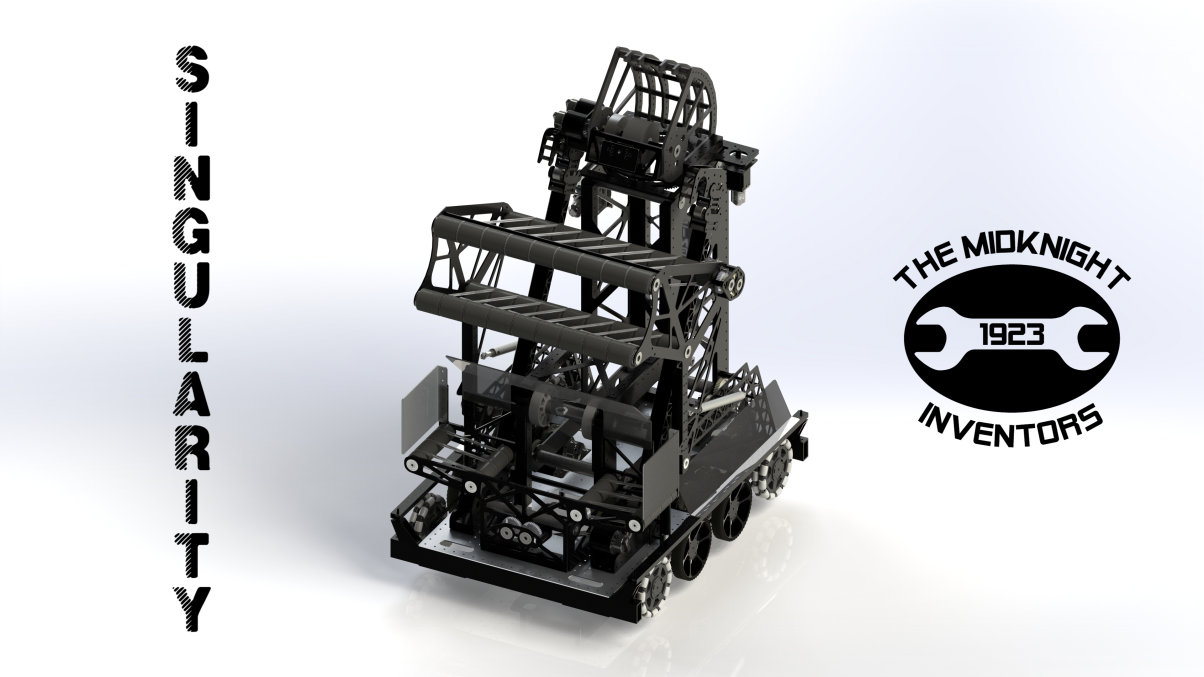 Technical Binder including Behind the Design, Behind the Controls, and Full Robot CAD coming soon!

Love it. What was the strategic reasoning for going tall instead of short? I’m really curious about this story for a load of teams and find the rationale that everyone used to be interesting. How much of a debate was it and what factors ultimately won out with this design?

It was quite a debate for a few days, but one of the biggest factors for going tall was our emphasis on shoot from anywhere in the front court without getting blocked. Since we have the turret to allow us to shoot from any orientation we could not find a good configuration/shooter position for a short bot that couldn’t be blocked when shooting from outside of a safe zone. We also, somewhat correctly, assumed that a lot of teams, especially at high levels of play would build a short bot that would excel at trench run cycles, so we felt that the “clean up” front bot was a valuable role for us to fill with the option to go to the human player station through the rendezvous zone as needed. This also informed our design constraint for a full width intake so we could clean up missed shots and overflow loop balls quickly.

How are you guys dealing with wire management to the turret? 500 degrees is a lot.

That fire rate is incredibly satisfying. Reminds me of 469 back in 2006.

We made a fairly stiff turret service cable which was essentially a bundle of all the power and signal wires for the Falcons, and the Ethernet cable for the Limelight zip tied every few inches. We then sheathed that in an abrasion resistant cable sheath. Then we just zip tied the cable to a safe spot on the ball tower and a safe spot on the shooter.

The other trick we used for cable management for the turret is that we wind the cable up around the tower and when we want to shoot, we always spin the turret counterclockwise unwinding the cable until we find the target. Once we find the target we start live tracking it. We help the turret find the target by feeding it information from the robot’s odometry sensors to guesstimate the position of the goal relative to the angle of the turret so we have rough idea of where to look. Then once we fire our volley we return the turret home which winds the cable back up and protects it.

In the event that the cable does get damaged, it has a “universal” connector block on both ends so we can swap out to another pre-made cable.

I weighed in on Twitter about this robot, but to expand on that a little more:

Wowwwwww. Eric, Sarath, and team…that robot is incredible. I’m very sad I did not get to see it in person or on the field. Hyped to see the tech binder.

Woah. Can someone confirm that this is the second fastest shooter if not the first? 118 had their 5th ball out before the first went in the goal, 1923 has the capability too

Yes, we definitely have the capability for the fifth ball to be released before the first hits the goal. I wouldn’t compare speed with a team that’s already gotten to play just yet, but we’re obviously aiming to be same speed or faster as perennial elite teams like 118.

The “reveal video” footage was filmed during our shooter tuning. Our intent was to devote a day or two of driver practice to get better camera shots of a really dialed in machine, as we weren’t scheduled to compete until week 4. Obviously, we didn’t quite get that far before everything shut down.

When we get to compete, I think it’s fair to make shot for shot comparisons. For now, we definitely have the capability to shoot that quickly - we will see exactly how fast when the robot hits official carpet.

We also, somewhat correctly, assumed that a lot of teams, especially at high levels of play would build a short bot that would excel at trench run cycles, so we felt that the “clean up” front bot was a valuable role for us to fill

The ability to predict a high level robot and then make the conscious decision to design a robot that compliments that its a very underrated and woefully underused strategy in FRC.

That being said, I wouldn’t count y’all out of the running on being a high seeded robot yourself. The tracking and fire rate your robot has seems to make up for the time spent driving outside of the trench.

Also the name is very apt, considering just how touch-it-own-it your intake is.

Thanks! We did definitely target being a high seeded captain at all of our events, and hopefully worlds as well, but the key distinction we made in our thought process for this year was aiming to be complimentary to other elite robots so that we could formulate a stronger alliance. We aimed to be just off meta enough to benefit from what we thought other top teams would converge on.

I felt that this year more so than the last few allowed for more specialization in design without sacrificing the ability to play all aspects of the game at a high level.

I’m assuming that you guys unfortunately didn’t get to play. With that being said, were you guys worried about your omnis breaking if you were to go over the steel barriers in the rendezvous zone?

Yeah, we didn’t quite get that far but we basically had two plans.

That was like a “one week out” problem we knew we wanted to evaluate. Either solution wouldn’t require much effort so we were more focused on tuning our shot and developing autonomous modes the week we shut down. Definitely on the list of things to be prepared for before we competed.

We aimed to be just off meta enough to benefit from what we thought other top teams would converge on.

I love the way you put this. It’s something that I have considered and thought about a lot but hadn’t heard it articulated like that.

HighTide is one of 1923’s favorite robots of 2020. Loved watching them play because we knew our matchflow would be similar.

What does it take to reach such a fast rate on the balls with a belt system for power cell storage?

From what I understand, you’d want heavy fly wheels not to loose momentum and a high enough speed on the belts. Is your robot using another set of wheels to accelerate the balls going into the turret to provide consistency?

High rate of fire and by extension fast cycle time was something we designed around from kickoff day. We started all the way from the intake ensuring that we could plow into a pile of 5 balls on the ground and pull them into the robot without jamming. Then we focused on making sure we could index the balls fast enough to have them ready to shoot in a single file line by the time we arrived at a suitable shooting location. Then we implemented a highly tested ball tower where we iterated on a combination of parameters including polybelt vs. polycord, compression, location and number of flex wheels in relation to belts, and sensor integration. All of this feeds the balls into the shooter through the turret which is perfectly centered over the ball path such that we found additional feeder wheels not needed. Finally the shooter itself has 3 Falcons for more power, and a ~3lb inertia wheel that is pocketed to concentrate the mass around the rim for maximum Moment of Inertia.