You’ll notice that the top assembly is empty right now. In fact, everything is barely started, let alone finished. This year, we’re going to try and better document our journey / process in developing the CAD. Each week, we’ll try to post something in the cad that we think is neat, and/or something we’re struggling with.

Something we’re currently struggling with is the ability to go through the trench. I’ll make a case for both below.

A bot going through the trench has an advantage in cycling because it has a defense free area (TRENCH RUN) to travel through to get to the other side of the field. Conveniently, that area can also be used as a protected shooting location. The math seems to show that a short bot can still hit the 3pt shot from the TARGET ZONE, giving it another protected shot. A low bot will also have a low center of gravity, helping prevent tipping if the bot does have to zip through the rendezvous points.

The tough part here is that it’s a monster of a packaging problem. 319 is a competitive team, and wants to be able to do everything on the field if we can. Stuffing all the things that we want our robot to do into a bot that can fit under the trench will be a tough challenge.

A tall bot has a better angle at the 3pt goal from all shooting locations than low bots. It has more space to store and index POWER CELLS, more space to stuff a hanging mechanism in, and the CONTROL PANEL mechanism doesn’t have to be articulated. All this amounts to the fact that a tall robot can be an easier packaging solution. This obviously comes at the cost of not being able to go through the trench, which means full field cycles will take longer.

It’s possible that not all 3 robots can cycle through the trench run effectively in a match, meaning that a bot that can play effectively from one side of the trench or the other would be advantageous. Due to the previously mentioned better shooting angles, a tall bot might have an advantage over a short bot as a fullback or forward since it can place it’s shooter such that the shots are unblockable by a 45" tall robot.

We’ll be deciding this weekend if we’re going tall or short. Ultimately, it will come down to which 319 bot will be better. Would a 319 tall robot be better than a 319 short robot? Let me know what you think.

I haven’t designed a turret since 2012, so i figured I’d take a crack at it. We recently received a Markforged printer, so I decided to leverage printing a jumbo HTD pulley. I generated the pulley with the MKCAD pulley generator I posted a while back. The design was inspired by the Armabot Turret 240, and will eventually feature a similarly sectioned pulley. I just didn’t want to put in the effort in the event that 319 chooses not to use a turret.

The bearings for the turret started with the “bearing sandwich” approach, but I removed the bottom bread bearing of the sandwich and replaced it with a printed “bushing” that will ride on the aluminum plate. I tried to minimize the stack height as much as possible, and I’m happy to take suggestions on how to get it even shorter. The pulley is 160T 5mm HTD with an 8" hole blown through it. It’s all supported by a 3/16" AL plate. 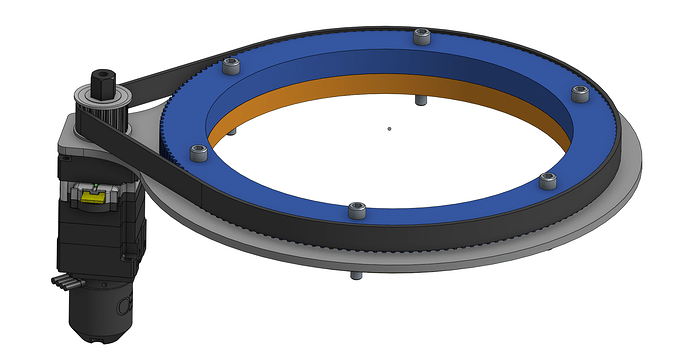 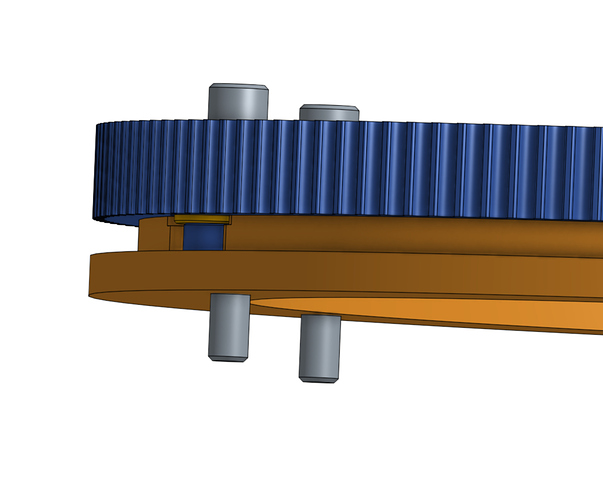 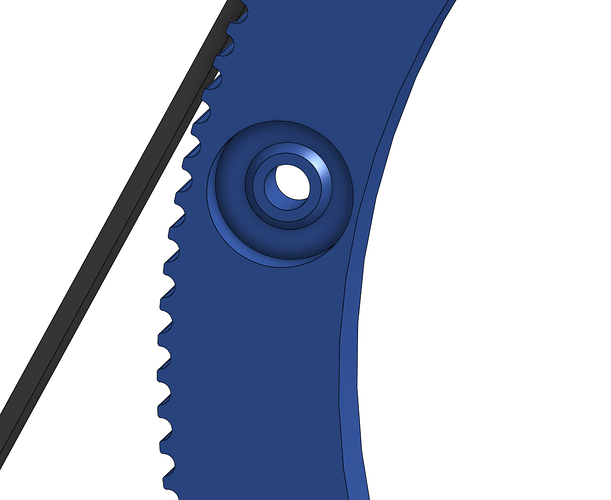 Great post Ty! Really looking forward to seeing what 319 decides on this weekend.

Question about your turret pulley (and for anyone else who might have the answer): how did you calculate the center distance between the large custom pulley and the smaller COTS pulley…and how did you determine the belt length / # of teeth needed?

The WCP belt calculator will spit out the center distance, but wont recommend a belt because they dont sell them that long. The SDP/SI calculator I normally use only lists pulleys up to ~80T.

Curious to know what other resources are out there for large pulley center distance and belt length calculations.

If you’re using Solidworks, you can use the path length dimensions to determine center distances. For the pulleys, use the formula teeth*pitch/pi and connect the two with tangent lines. Then trim away any circle that isn’t “in the belt” and dimension the path with a length teeth*pitch.

Nice work Ty. We’re cooking up something similar to prototype with. It uses this off the shelf round turntable from McMaster. 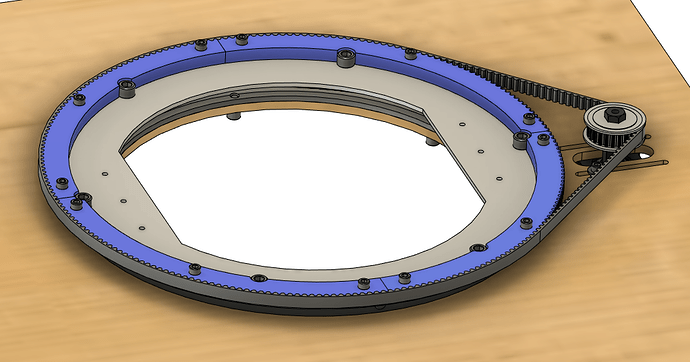 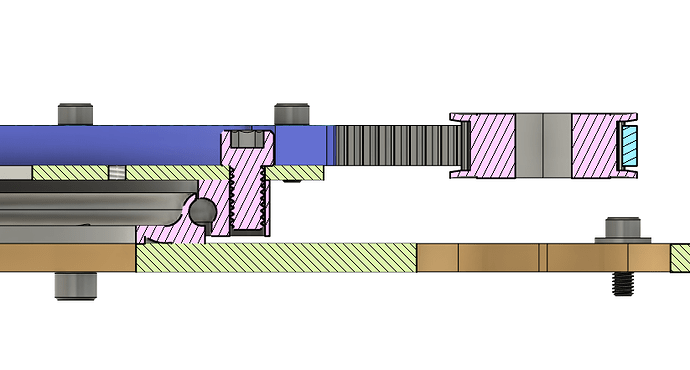 @TD78 After checking the pitch length (belt length) using a CAD tool as someone recommended, it can be checked by using the ChainBelt tab on the AMB design spreadsheet. It works with larger diameter pulleys as well.

How exactly do you do this, I am experimenting with it and I cant seem to get a reasonable size out. Is it (Teethpitch)/pi or Teeth(Pitch/pi)

how did you determine the belt length / # of teeth needed?

Multiple belt length calculators exist, we used to use the one on BBman website.

There is a calculator in designsheet.spectrum3847.org that will let you put in any 2 tooth count pulleys (either 3mm or 5mm) and then enter a desired center distance or a desired belt tooth count and tell you the other.

(teeth x pitch)/pi. Belts have their pitch diameter far beyond the actual pulley profile so keep that into account whenever it looks “wrong”

Ok then is the pitch like a 5 mm or is that something else. I was getting 125 inches doing your method for a 200 tooth belt and it just didn’t Make sense. Or is it supposed to be 125 mm

95 decided that we can build a better 95 robot by going high having considered all of the excellent points you’ve made.

I suspect that you could make a low robot that you’re quite happy with if you find a clever way to self-align to the control panel tunnel that keeps defenders at arms reach (12in extensions are still part of your robot!) Give 'em the old Heisman frame extension.

Got the first shooter prototype up and running today. Dual 775pros running 3.5" colsons through 3:1 VPs at 75% power. We’re pretty happy with the results of a prototype, but we don’t like the randomness of the knuckleball throws.

Ty, as always, THANKS for posting your public CAD so early in the season! Looking forward to following closely this year.

I’m happy to take suggestions on how to get it even shorter.

Not sure if this is referring to the turret itself or its driving gearbox, but you can probably get better packaging using a 180° drive for the VP like the Armabelt drive or the [official VersaPlanetary 180° Drive].

but we don’t like the randomness of the knuckleball throws

One thing we did in 2016 to get less knuckle-ball of throws is to make the top and bottom wheels on each side different diameters to add backspin/forespin to the ball.

We ended up going with a hooded shooter made out of our 2017 ball tower turned upside down: 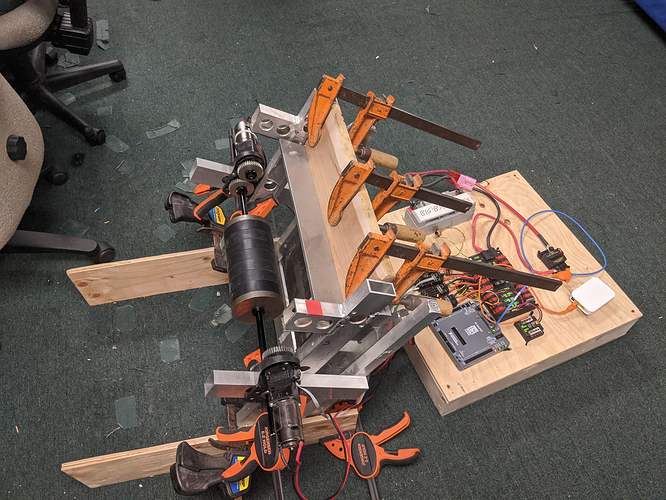 It’s running two 775pros at 3:1, black compliant wheels with big steel flywheels, and about 5" of space between the wheels and the .25" adhesive backed foam on the hood.

We couldn’t shoot more than 30ft until we added that big board with the 3 clamps to the top. It significantly stiffened our shooter hood and added about 20% to our range. I’d suggest making sure your shooter hoods are nice and rigid.

Here’s the CAD as it stands: 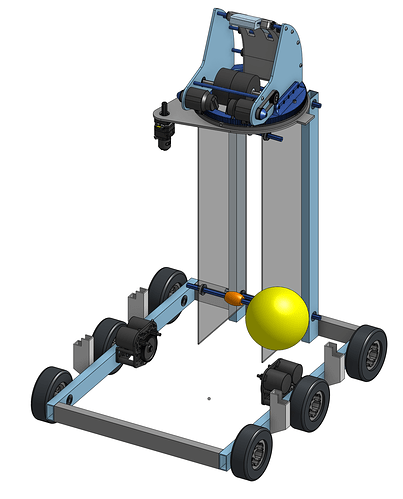 As you can see, we’ve decided to make a tall robot, almost entirely for packaging reasons. 319 is low on design and manufacturing resources this year, so we don’t want to try the usual FRC plan of trying to put 10lbs of stuff in a 5lb box. We think that a tall robot from 319 will be better than a short robot from 319 this year.

We decided to get rid of the custom turret from above, and instead use the turntable from McMaster that @BradMello linked above. We’re hoping to use 2x Falcon 500’s on our shooter, but ours haven’t arrived yet so we’re planning for a switch to NEOs if we need it.

How much does the whole “drum” for shooting weigh? (7 black compliant +2 steel plates)

May I ask how you are printing this in a Markforged printer? Reason why we didn’t explore this option was because our printer has a smaller bed size. (referring to the turrent HTD pulley)

We intend to chop the big HTD pulley into more printable parts, but haven’t gotten around to it yet in the CAD. That said, we’ll probably print these on our Markforged.

Got it. Thanks!
Looks really great! 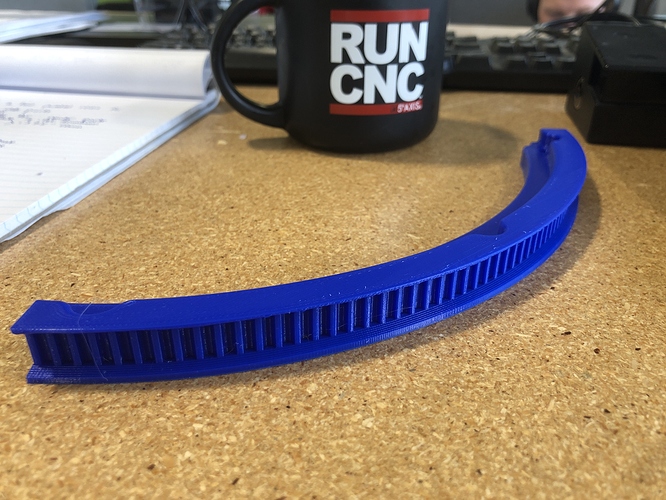 Split ours into 4 segments too, printed in PLA with a pretty high infill percentage and they’re rock solid. Waiting to see how they wear in (or wear out!) this weekend.