Big fan of all the updates and of 6328! Keep up the good work 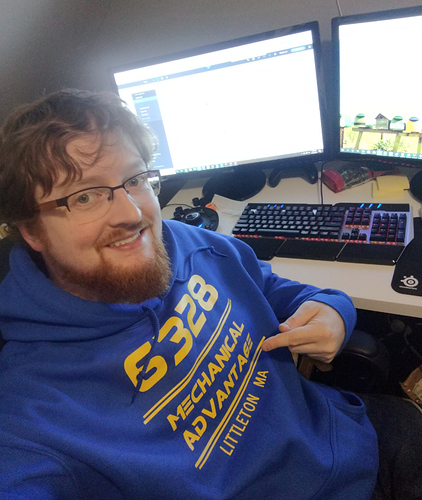 Playing with some other packing solutions, i’m a fan of this, we’ll be working to prototype it over the next couple days. 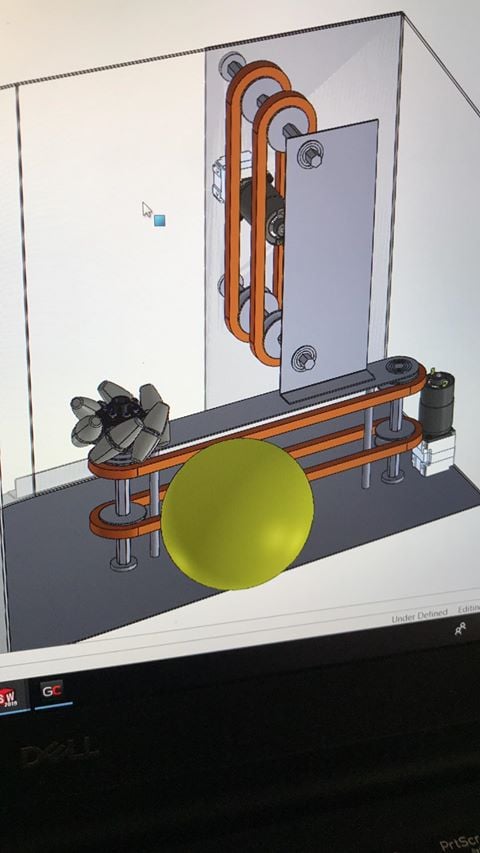 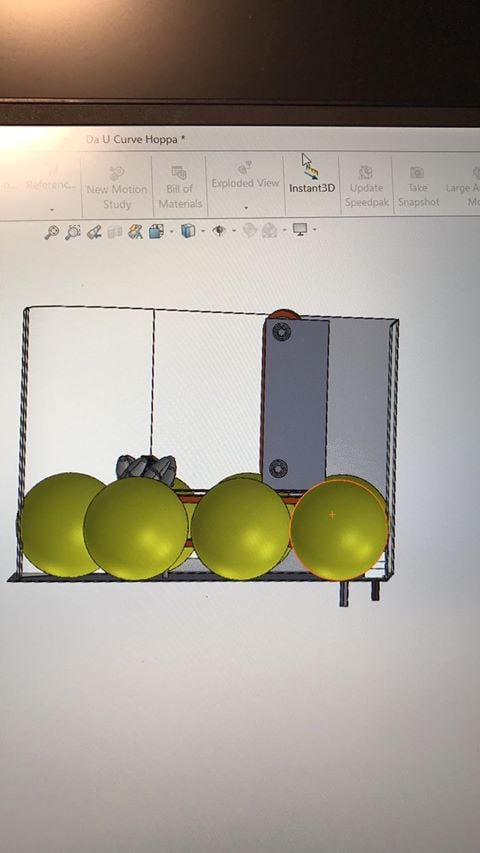 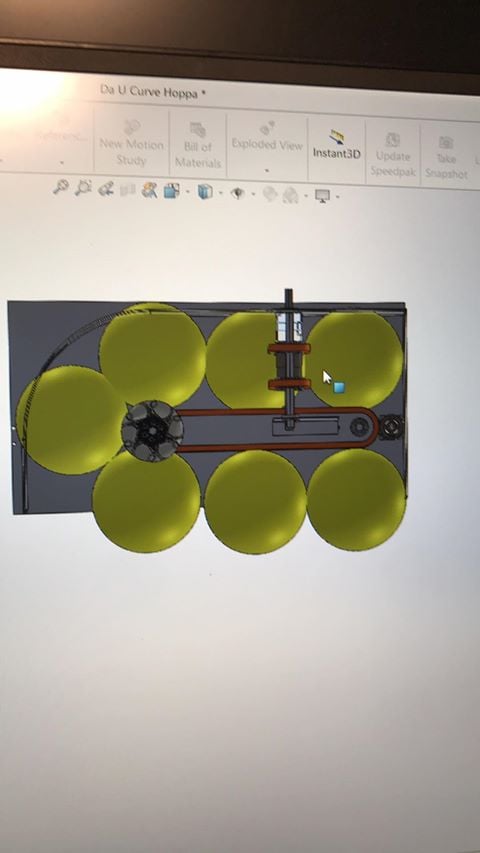 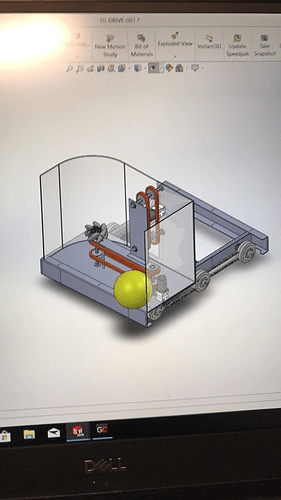 Be careful with that. The Ri3D teams proved the power cells stick to each other and recommended rollers/belts on two sides. Also, looks like a lot of wasted space for a max capacity of 5 power cells

Currently playing with a few ideas of how to quickly and passively be able to get a hook on the bar, here’s one option we’re currently prototyping and will have pictures up later.

Second option is a telescoping system that is driven up by constant force springs and pulled down by a winch. 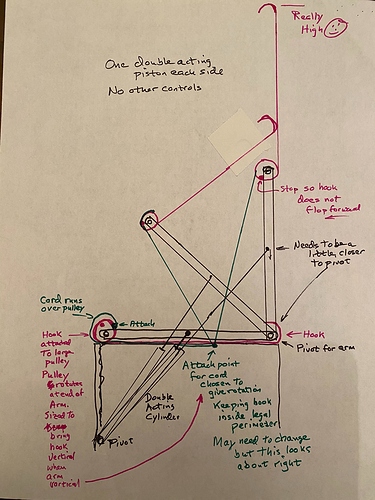 not sure what you mean by wasted space, this is by far the most compact hopped system we’ve been prototyping. As for the stick, we’re very award of the sticking issue but believe there are a few things we can try to resolve those issues that we believed are worth testing.

Check out one of our students posts on our automated attendance tracking system!

Over the past year, Team 6328 has been working to improve the way we track student and mentor attendance at meetings. This is useful both for determining attendance on a particular day and for gathering overall statistics. We thought that a computer set up in our shop with “sign in” and “sign out” buttons would be a burden on students and mentors (not to mention inaccurate when someone forgets to use it). Instead, we looked into ways we could track attendance automatically and invisibly. Our sol…

Sorry, I wasn’t trying to insult at all. I like the look of it! I was just wondering why it has a capacity for 7 power cells when 5 is the max.

That extra capacity could leave room for a software based indexing solution. An optical beam or other sensor used as an input to add a gap between balls as they’re taken in.

It’s rare that a hopper system doesn’t need more room than the total volume of the game pieces occupying it. Game pieces all contacting each other all the team isn’t always bueno. Also, they’ll need a bit of room if they ever plan to human load.

no worries! Charlie and Akash pretty much hit the nail on the head.

how would those balls keep in the robot instead of falling out? it doesn’t seem like there is anything keeping it inside

The intake would be used to help hold the balls in the system, not included in this CAD mock

Wow, the last two weeks have absolutely flown by. So where do we currently stand? Currently just hitting the end of our prototyping phase and hopefully by Tuesday night will have the our final decision for the major mechanisms on the robot. It’s hard to not feel behind right now, but I have a feeling once we finally are able to make the decision of which direction to take the hopper/serializing system, things will start to pick up.

Drivetrain is moving right along, we were scared to hit the go button on frame dims because of the hopper situation. That after moving down to only two options, we’ve decided to keep the dims the same as originally proposed 32in long by 26in wide, with 2in of ground clearance and 6in colson wheels dropcenter .092345. We’re going with the WCP flipped gearbox and 2 NEOs driven with a overall ratio of 11.5:1. Driven by #35 chain. Working on adding all the necessary holes and PEM hardware to the CAD so we can get our practice bot frame cut on Wednesday.

After narrowing down our hopper options to just two, we decided to stick with our originally proposed 148 style slide out, over the bumper intake. We’re started initial CAD for REV 1 which will be cut in the next few days to get a feel for fit and function. This follows what we’ve been prototyping from the start.

We’ve got the power port up are currently working on finishing up the hanging bar. Unfortunately we don’t have much space for all of this, so we’re currently trying to find a space to setup at least a half practice field.

Okay, here’s the big update. Over the last week we’ve prototyped just about every single type of hopper/serializing system we could come up with or have seen from others sharing their build season. I, for one, am exhausted with these damn game pieces and their inability to easily congregate into an orderly fashion. Below are some pictures of the different prototypes we’ve worked though.

This hopper design utilizes a single roller system and gravity to feed the balls into a single file line out the front of the hopper. Unfortunately, due to a lot of different issues, there have been several issues with this hopper. The main issues that would be fixed with some fiddling is the balls getting jammed when the opening is shorter than 2 balls long. This is a good options, but when the hopper does clear, it takes a fairly long time for that to happen. We ultimately ditched this idea.

This design is a version of the roller funnel hopper, just the roller at the top is replaced with two shafts mounted midway on the ball with ThriftyBot Vector Intake Wheels ™ . The rollers push the ball through the opening at the end of the system. After seeing some positive results from other teams, we decided we would put some effort into build our own. Below is some pictures and videos of the system working.

As you can see, there are some major flaws with this hopper design, the biggest being the balls always wanting to be pulled under the vector intake wheels. After seeing these results, we ditched this idea.

After some not so great results with a first few tests, we decided to go back to the whiteboard. We broke off into two teams and started brainstorming some better ideas. Below is one of the designs the first team came up with.

After some very promising results with this one, we decided we’d give it a go in sheet metal, so below is our final CAD version that is getting cut and assembled today. There are a lot of small details in this design that are key to getting the balls to flow freely and not jam. The biggest thing is a very very small amount of compression and slick surfaces for the ball to slide on. Will have more details as this gets built. 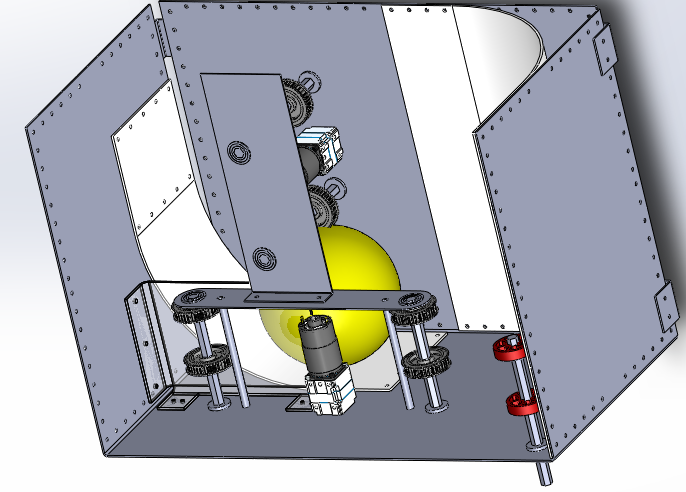 This design has to be my current favorite. It is by far the simplest way to take the balls from over the bumper and funnel them down into a single stream. If you click the link above, it’ll take you to FRC 6135’s video showcasing this design. After seeing this, we decided we needed to built it ourselves.

Laser cutting the parts for the prototype.

A slightly jank setup, but it gets the job done.

Below is the initial video of our testing with this prototype.

Moving forward, we’re working on CADing up this design in sheet metal as well to hopefully get cut and assembled by this Wednesday. We really want to make the final decision by Wednesday night so we can move forward with the entire robot CAD.

There hasn’t been a ton of focus on hanging yet, due to wanted to make sure we knew what the packaging constraints were for this year. But now that we have a better understanding of what the robot may look like, we’re going to move forward with continuing to prototype.

Our initial thought is to develop either some three stage telescoping arms(254 2013), or mount high single stage arms(2056 2016). We’re still aiming to have a buddy climb, so the hope is to be able to pull up as high as possible from the centerline of the robot and have enough room underneath us to pick up a short robot for a buddy climb. We should have preliminary designs and tests done for this by Friday with a decision made Saturday.

Been on the back burner due to hopper efforts, but here’s our current geometry for what we think the shooter will ultimately look like. It’ll be powered by two NEO’s geared 1:1.5 with two of the fairline wheels, and we’re still testing for the best compression with this setup. We’re also using two kicker wheels to help push the ball into the shooter.

Just some extra stuff from the week I like to include!

We had the opportunity to be on FUN this past weekend to talk about the Open Alliance and where we’re at with our current builds. Check out the videos here, here, and here!

Super big shout out to MicroBilt Corporation for their donation of 4 more built CAD stations, super excited to get these hooked up! Thanks!

Scouting app beta testing, will have a write up of the results soon!

Best part of the update

When will Akash stickers be for sale?

I’d recommend not buying the one I have on teespring they took forever to get and didn’t cut in a nice circle. Let me see if I can get some sticker mule ones made this week that are better.

This design is a version of the roller funnel hopper, just the roller at the top is replaced with two shafts mounted midway on the ball with ThriftyBot Vector Intake Wheels ™ . The rollers push the ball through the opening at the end of the system. After seeing some positive results from other teams, we decided we would put some effort into build our own. Below is some pictures and videos of the system working.

Team 5254 also prototyped this but with 4" mecanums which weren’t any better (in fact much worse). Here are some videos featuring a mutual mentor:

We played around with changing the floor level, the speed of the rollers, only having one side, etc, but didn’t get much success. Lower speeds kind of work better but with 5 balls on top of it, it winds up like the video 6328 posted.

This is effectively an auger, which I know a few teams have used real ones in the past. If you want to 3d print your own auger, I recommend using the coil feature in inventor and extruding a hex shaft through it, then figuring out a way to print that. I split it into 4 segments and then printed each one on a half of a hex shaft. Be careful of warping. We haven’t (and may not ever) gotten around to testing it since I messed up the print and have no way to re-attach the auger parts back together besides glue and we are busy with other stuff. If anyone tries this, we’d be interested in the results.

Thanks for adding this Justin, was going to ask if anyone had used bigger wheels. Cool concept but unfortunately to many jams to be effective.

Why is your standoff configuration like this in your shooter? 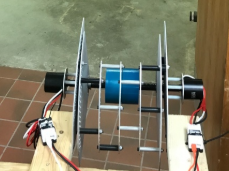 Seems… not the most rigid you could do. Can you elaborate?

you’re very correct, it works(two spacers per gap), but there is some issues with flex. The next revision of our shooter that we’re putting together this week will have a more solid hood to increase consistency.