Team 8728, Argonauts, is excited to be joining the Open Alliance this year - as a rookie team!!
Our goal is to provide a weekly snapshot of our findings and decision making over the course of this upcoming 2022 FRC Season.

If you have any questions, please don’t hesitate to ask! We’re looking forward to seeing everyone at our first competition! Good luck in the 2022 season!

After a busy summer recruiting and cleaning our new shop at our Athens High School in Troy, Michigan, the Argonauts were quickly occupied with the training season. As most of our team are rookies we created a set of comprehensive training material, the first major decision we made as a team was to make sure that each student was involved with both sides of the team, meaning that students would join a subgroup on the business and engineering side.

It has been a long time coming, but we finally are releasing our first build blog! Be ready for 4 weeks of material in one post! As a rookie team there have been a lot of growing pains with getting a robot going, so the build blog has been on the back burner. As a mentor for the team Alec was finally able to set aside some time to update everyone on how we have been doing! One benefit of this team is that we have over 10 mentors that are FIRST Alumni so we are doing our best to prepare the students for what is to come during the build season.

Week 1:
On the day of Kickoff, the team was split into 4 subgroups where they all went through the game manual and read all of the rules (like every team does). After about 2 hours of manual reading and general robot discussion, the team came together as a large group to strategize. This is where we used our PPUT analysis spreadsheet so we can organize and prioritize what the team wants to do in this year’s game. Below shows the team’s PPUT analysis chart that they created and the very right shows the priority list that the team is using while designing the robot. After reviewing the game, we determined that there should only need to be 4 subsystems for Rapid React (we were predicting 5). These subgroups are Chassis, Intake, Shooter, and Climber. Each group then went and started reviewing some previous robot designs of other teams to see what general strategies they wanted to use for their systems. They made sure to talk with the other subteams to make sure that their ideas would integrate well and that there would be space on the robot.

The first week of the season, the teams made proposal presentations to share with the rest of the team. All subteams came up with 3 different concepts and created prototypes of their designs, if possible, to share with the team. With our lack of extra stock with being a rookie team, it was difficult to make any prototypes, so our initial designs that we created in CAD were made and then tweaked after testing. Our intake team put together Team 8728’s first ever prototype! Once the groups presented their ideas, the team voted on what they think the robot should do and look like. They decided on a west coast style tank drive, an over the bumper intake, a single flywheel shooter and a 2-armed elevator to get to the mid bar. After decisions were made, the design team went to work to start creating their respective subgroups’ designs and talked about integration. 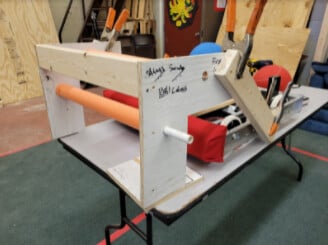 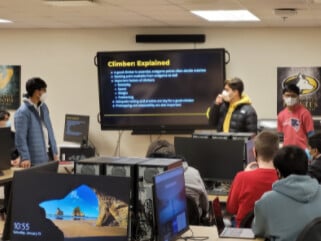 Week 2:
The design team kept working hard with our Chassis and Intake teams leading the way. We had our chassis designed by Thursday of Week 2 so we were able to get those parts ordered quickly. The intake went through several iterations, but by the end of week 2 we had a completed system. The only thing left to do was designing the deployment of the intake. We also started constructing the field elements for the game. We built an Upper and Lower Hub that Alec did a bit of redesigning on so we could save some money. We also built the whole Climbing area so if we are ambitious as the weeks progress, we have the ability to go to the high or traversal bar. 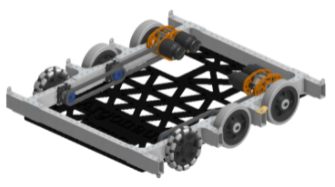 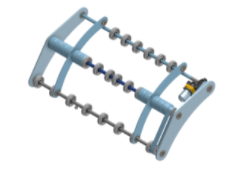 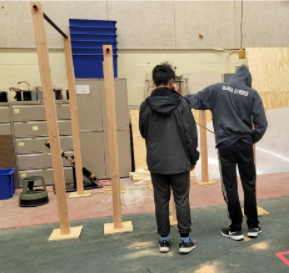 Week 3:
After the intake was made, the next step was to create the indexer. There were several renditions of the indexer that went through different phases, but at the end of the day, they decided to use mecanum wheels to vector the ball to the middle of the robot before it reaches the indexer. This will allow the intake to be more secure and easier for the indexer to move the cargo to the shooter. A few members on the intake team have FTC experience, so this is where they learned the vectoring strategy. In Week 3 we also had some of our parts delivered and the organization of all our parts had to be done in addition to designing and building a robot. Organization of parts was a focus of several students for a few days during week 3 while we were waiting on the rest of the parts. At the very end of week 3, Alec took 4 students over to Lawrence Tech University where we did some waterjet work, CNC Milling, and Lathe work. This is when the students started to see a robot come to life. We fully machined our chassis, got our gearbox water-jetted and machined, and got several spacers and some shafts made for our drivetrain and intake. Our programming team got to work in week 3; they started working with ROMI robots to practice some driving code for our robot and our KoP chassis that was donated to us this summer. Special Shoutout to Tyler for having us on First Updates Now this week! We really enjoyed showing how a rookie team is doing in 2022. 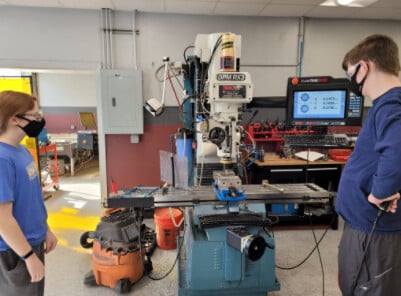 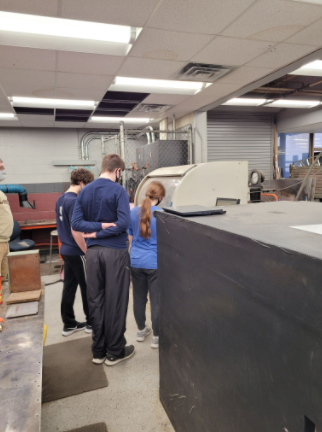 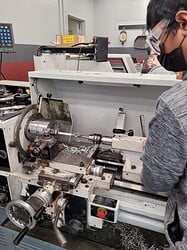 Week 4:
Welcome to Robot Week! The Students were getting really excited this week now that some parts started to come together. The Chassis was built, our gearboxes were made, our bumpers were constructed, our intake was starting to come together (just waiting on 1 more part to fully assemble) and our shooter prototypes took shape. By the end of the week our shooter worked really well! (Shot 7 for 8). This was a very exciting week for the students and we can see them getting excited and ready to have a full robot! 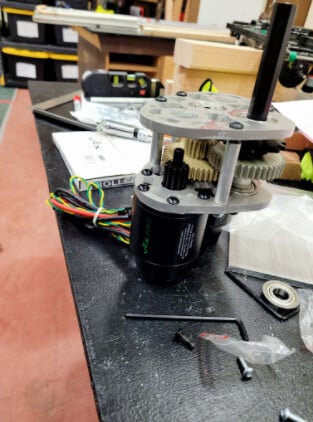 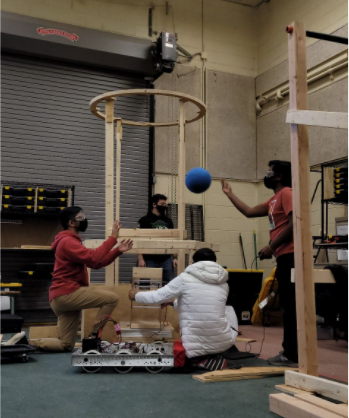 Mentor’s Note
So far as a rookie team, we, as mentors, are really proud of where the students are right now in the build season. We are doing our best to exceed the expectations of what a rookie team is expected to be. There are still 2 crucial weeks to go and our team is so excited to get to competition season! From now on, we should be able to do weekly build blog updates so stay tuned! If anyone has any questions about our robot design, design process or just our team in general, please reach out! Our students are looking forward to seeing you all on 2/15/2022 on First Updates Now! See you soon!

P.S. I wish CD didn’t have a restriction on pictures uploaded on a comment/thread for new CD members - @AlecP24 contributed to putting together this update, I’m just posting it for him cause of new member constraints. Thanks Alec!!

Wednesday Feb 9th:
On Wednesday, students were productive right away. The Mechanical team was finishing up the design of the climber and we were hoping it would be ready to build on Friday and Saturday. The intake arm was starting to take shape. Mounting for the intake was determined and was to be worked on next. Our pits were finalized and now we are planning where everything will go for competition season in the coming week. The shooter prototype had its final tweaks and will begin fabrication soon. The team determined that we will use pneumatics to raise and lower the climber so the mounting and deployment of the cylinders are being drawn up. 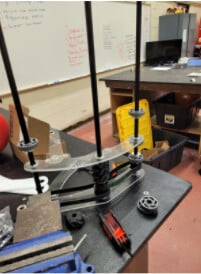 Thursday Feb 10th:
On Thursday, the team did not get a lot of robot stuff done, but we had our team updates meeting and focused on team safety! We had the entire team take a safety test so we can keep track of who is qualified to run certain machines and who can take care of a battery spill if one occurs. After the safety test, the intake was close to completion and was planned to be wrapped up on Friday. The shooter CAD was completed and the fabrication was close to completion. The indexer also had its design completed. 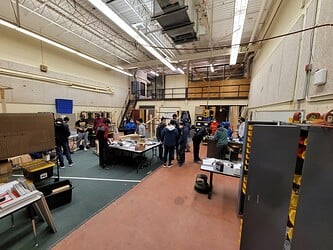 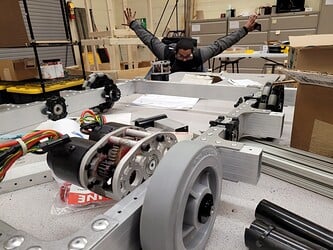 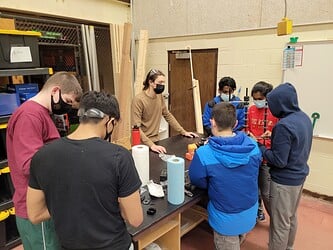 Friday Feb 11th:
On Friday, the team hit 2 BIG milestones! We finished constructing our chassis! This was a huge step for our team and the rest of the parts were to follow in the next day or so. Also, the indexer was finished as well! We planned on getting parts mounted within the next day or so! 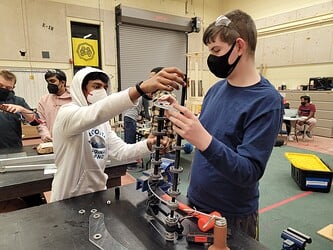 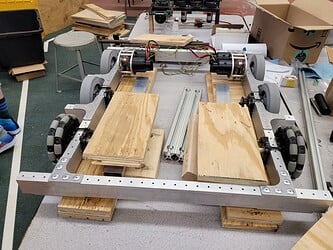 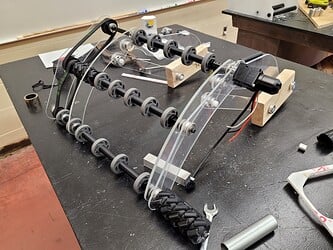 Saturday Feb 12th:
On Saturday, the team was able to put together parts that helped complete the full structure of the robot. The intake was completed and the mounting on the chassis for the intake was started. The indexer/shooter tower was also started. We positioned the indexer/shooter on some wood blocks to cut out some tubing to get it officially mounted to the chassis. The shooter design was finished so the fabrication of those parts will begin shortly. We are coming down to the final stretch and we should have a robot done by the end of build season! Another huge milestone is that we finished the frame of our robot cart! We had some extruded aluminum donated from another team that we were able to turn into a very sturdy robot cart! We will be adding a tool bag and a battery rack to the cart in the coming days. We made the cart easily conformable to any robot we have by making adjustable mounting points on the top level so we can change it if we need to from year to year. There are still some aesthetic additions that need to be done but if we needed a cart today, we would have one! Looking forward to a day off to refresh and then round out our build week 5 on Monday! 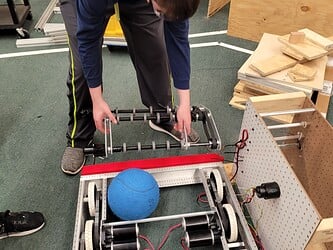 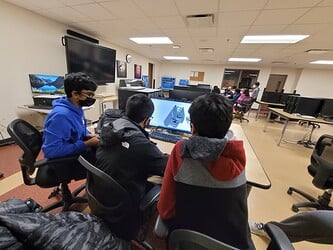 Monday Feb 14th:
Final day of week 5 over here at the Argonauts shop! We finished some structural things done with our indexer/shooter tower. We bolted the polycarbonate to some welded aluminum frame in order to mount it to the chassis. We were also able to put some more of our climber together. A few of the students were working on getting some cross members put onto the chassis so we could mount the shooter tower and the intake together. Our biggest milestone of the day was that we uploaded some code and got our wheels moving! So the Argonauts now have a moving robot! 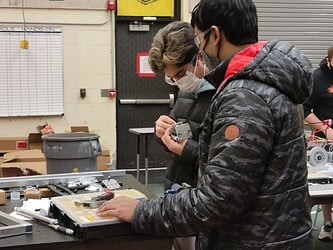 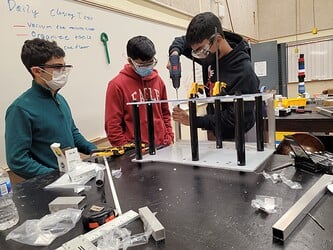 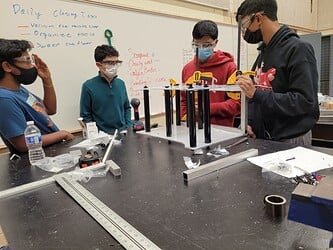 Mentor Note:
As mentors with FIRST FRC experience, it is a bit strange still working on getting a completed robot in week 6, but with the progress of the students, shipping delays, being rookies, and allowing students to come up with their own designs and troubleshooting themselves, they have done an amazing job getting to where they are today! We are excited for a final official week of build season and then a crazy competition season that will be starting, for us, in week 2!

FRC 8728 Argonauts shows off their robot progress including parts of the climber, intake, indexing and drive chassis https://youtu.be/KcD11PgFMAI 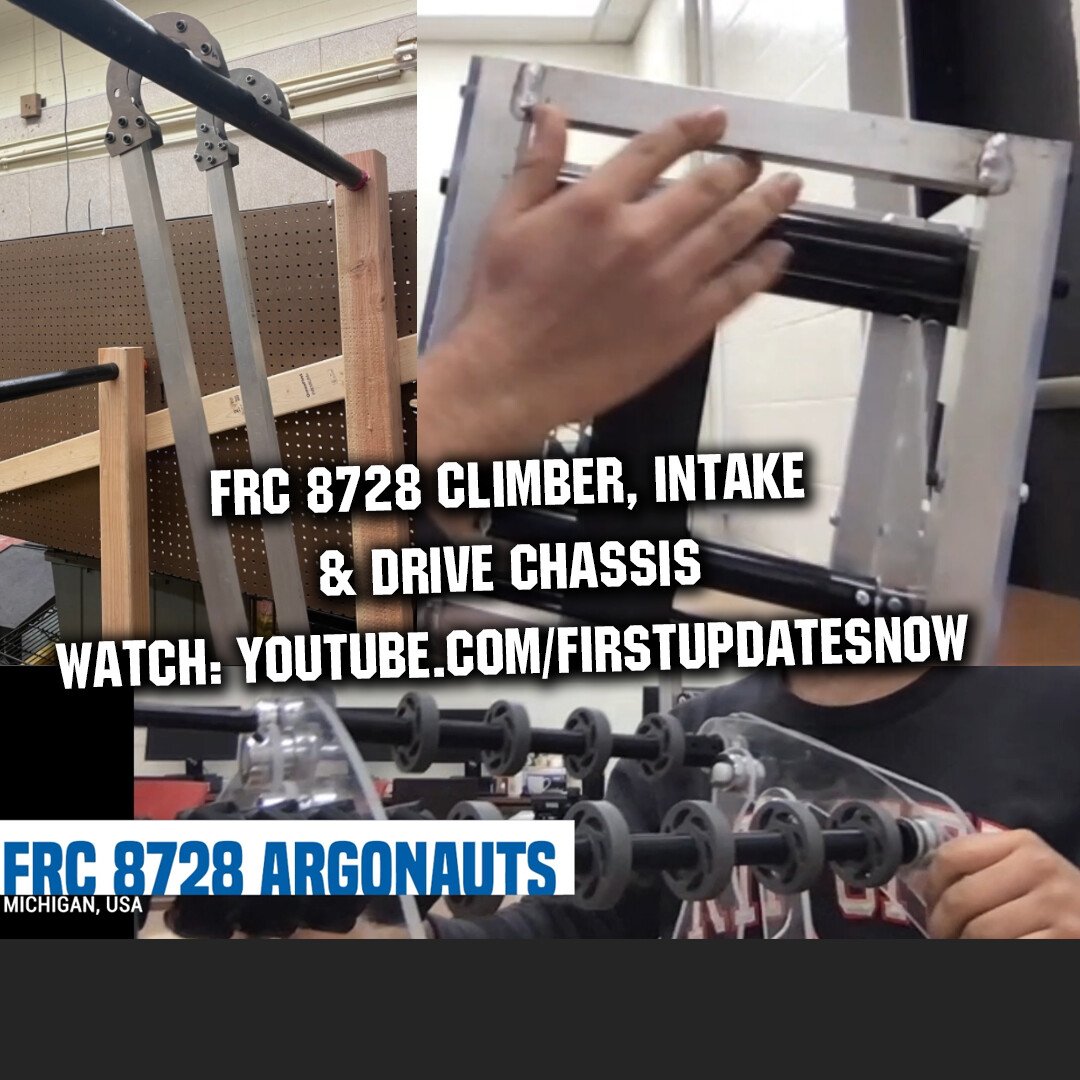 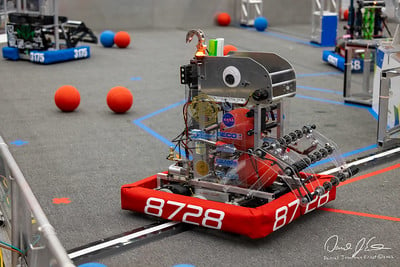