Still having significant code-related or CAN-related issues. Any thoughts on the above error and notes is appreciated.

We had this issue recently and went though similar debugging steps. We found that we we initializing CAN-based devices that don’t exist. I.e. when our practice PDP’s CAN bus module was fried, we got this error because the RoboRIO couldn’t find a device with the specified ID. I know it sounds a bit silly, but make sure you don’t initialize any CAN based device that does not exist or has a different CAN bus ID. Please let us know what fixes it for you!

We are also receiving this issue with the watchdog not being fed, we have checked multiple times that we are not initializing any extra CAN devices and that each of our devices has a unique ID. I’ll be interested to see what the root cause of this is.

We’ve also been having weird issues that look like CAN or network problems as well as we’ve seen watchdog errors sometimes, we don’t know if it’s related or not but we’ve noticed that for some reason our packet loss has gone way up after flashing our robots to the 2019 RIO and and radio images. We haven’t had enough time yet to try going back to the 2018 images to see if it remedies our connection issues. Any chance your driver station reports packet loss?

We got the CAN/control issue sorted. We were able to intentionally reproduce it by commanding a talon that did not exist after carefully paring down our code to eliminate any unknowns, even commands that ‘shouldn’t’ have been called, but referenced absent CAN devices.

We were also able to reproduce the issue by simply ‘sleeping’ or freezing the main thread for 500ms (a rectal-plucked value), so if the main robot loop is taking too long to run (over 20ms maybe?) this error/bug/stupid/error can be triggered.

You can see the code in the video below, and the errors/symptoms. The test code is in our GitHub repo which is linked elsewhere in this thread. The following commit is our test code to illustrate the problem: 9b2e009266a4d6727e7c0fbca31ed2f2fd898e37

We believe that something in the newer firmware or programming environment triggers these issues when an absent CAN device is referenced, even if it’s not necessarily actively being called. We’re a little fuzzy on that details

Yes it did. Especially when multiple missing devices were being reported.

SIGNIFICANT DISCOVERY: if you try to call/talk to/access the PDP from more than one line of code this triggers the time-out issue. It is possible that calling other devices from multiple lines can also cause things to spaz out.

Our fix can be found in this commit. It involves making a singleton class, which is designed such that only one instance will ever exist. This results in only ever instantiating one PowerDistributionPanel object.

SIGNIFICANT DISCOVERY: if you try to call/talk to/access the PDP from more than one line of code this triggers the time-out issue. It is possible that calling other devices from multiple lines can also cause things to spaz out.

Interesting. We also use an (effective) singleton to manage PDP calls as a result of different testing. Last year I wrote my high frequency logging framework and did benchmarks of a few sensors like NavX and a Rio-wired 63R. The PDP took 4ms to read the current of all 16 ports. Oddly enough, with multi-threading and concurrent calls it took 7 ms to read all 16 ports. I haven’t tested again with 2019 code though.

This was a known issue with the old PDP class. It was fixed over the summer to only be about 0.45 ms to read all PDP data. The cause of this was each can read takes about 0.15ms, and they were not being cached, so each value read was taking that long. Now the status packets are cached, so only 3 can calls are needed per iteration.

This is also the reason creating multiple new instances doesn’t work in 2019. Although it should be throwing an exception on construction of more then the first one, so I’ll check that out to make sure it happens.

So, @Thad_House if what you are saying is correct then is that theoretically not the cause of the issue?

That is the cause of the issue. I just checked the source code, and it is allowing multiple PDP instances when it shouldn’t be. We will fix it for the next wpilib release. Only once PDP instance is supported, like most other physical devices.

Ended Saturday with the practice bot starting to get assembled: 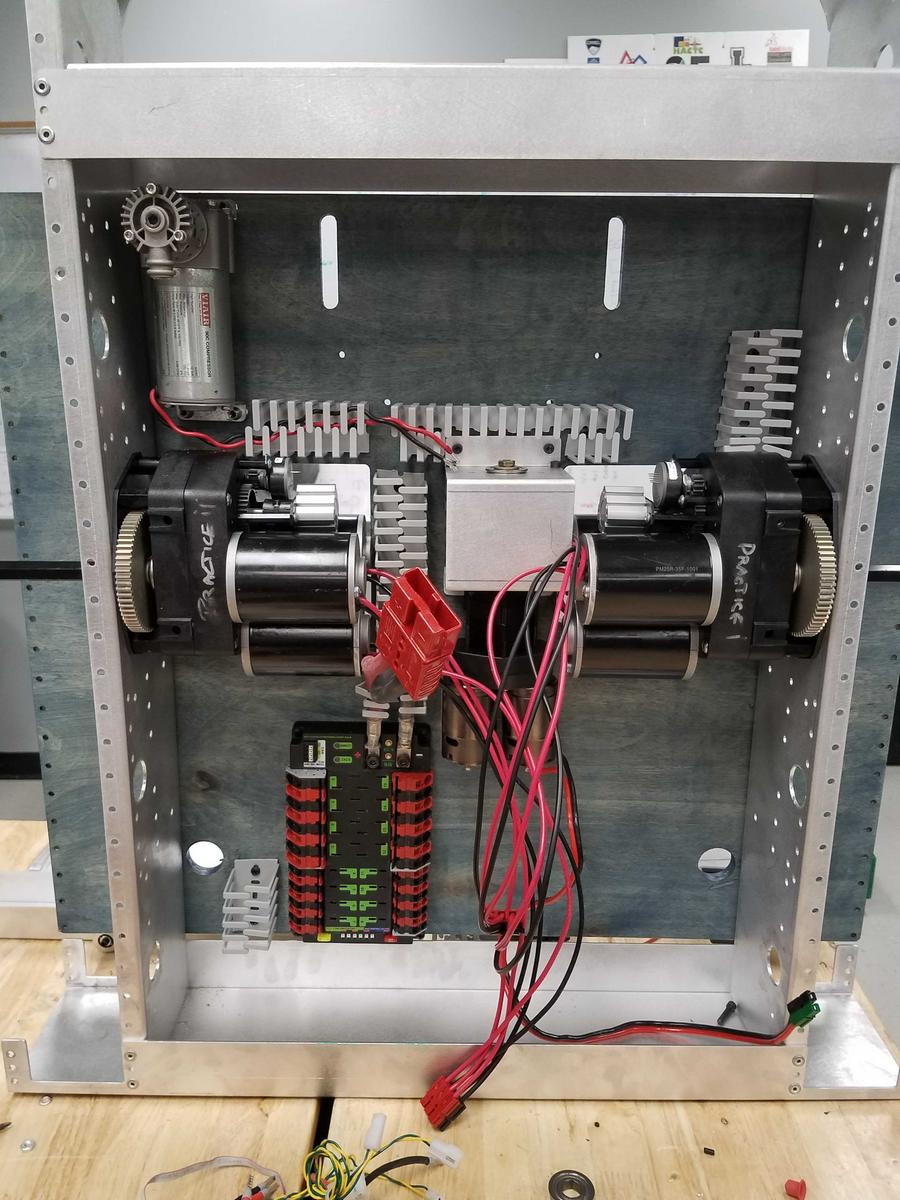 And the competition robot having some real functionality: 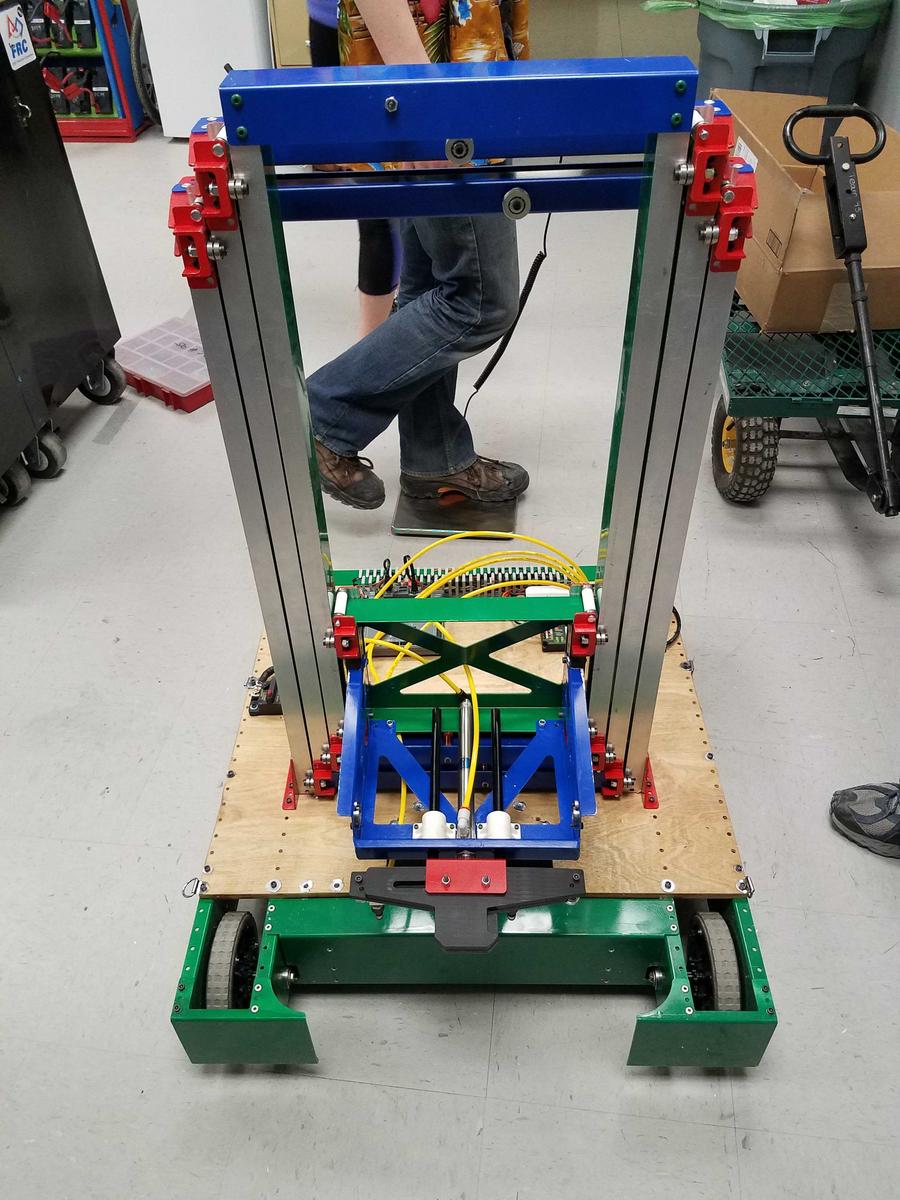 Auto shifting and the hatch mechanism work nicely. Next items on the list are the hatch ground intake, elevator drive, and cargo mechanism.

Here is a video of our first real practice driving.

Precision driving this year will be… challenging… much more so than many other games that I recall. I hope our vision-aided driving works out…

Wow that’s a really eye opening look at cycles for this year. The lineup and precision required at both ends of the process seem finicky, and both of those aspects are for the most part out of the drivers’ convenient line of sight.

I love the sound of your hatch mechanism.

I think this video should be enough to start changing people’s minds about defense in this game. I was surprised by how many people didn’t think there would be any value in it. This videos does a good job showing that it won’t take a whole lot of effort to keep an opponent out of small scoring sweet spot. Though you won’t be defended at pickup anyways, it’s worth noting that your collection position tolerance seemed to be pretty good.

As always, thanks for sharing!

Thanks for sharing a video that shows the real time it takes to complete a cycle, very interesting.

I agree. There are many aspects of the game that you initially overlook or expect to work in a certain way. I was concerned about alignment onto those hatch locations, and it looks like it’s every bit as difficult as I thought it would be. Perhaps even more so, especially for teams who don’t have this style active extend and retract system. Having to drive the robot in and out to get the hatch placement right will be an enormous time sink.

Having to drive the robot in and out to get the hatch placement right will be an enormous time sink.

A diagram that many people will want to consider is this: 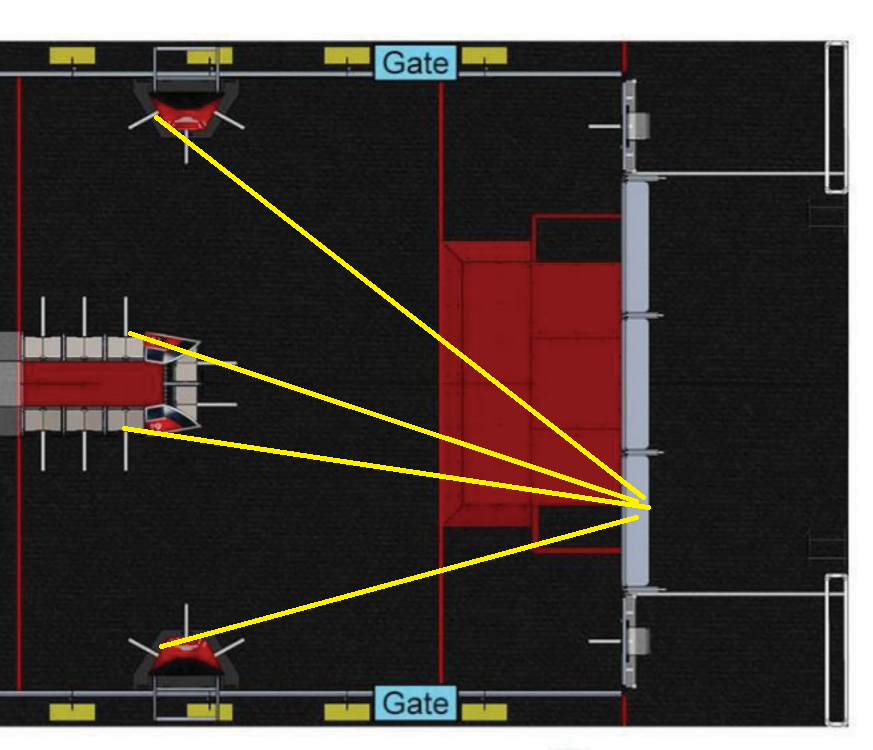 It shows scoring locations where driver depth perception or camera-aided driving is utilized to score. It’s most of the scoring locations! Using depth perception is hard. Even great drivers can struggle with it. I opine that cycle times will be remarkably longer than most tems are estimating, and Rocket RPs will be less common that Face The Boss in 2018, and (maybe slightly) more common than Fuel RPs from 2017.