Anyone experiencing the drop using a limelight? The leds on our limelight flash like they do when starting up. Maybe this information can provide some insight into what’s actually happening.

We noticed that if you manually switch the shafts you may need a tool to get the snap ring to seat properly. Twice we have switched from a 1/2"shaft to a 3/8" Shaft and failed to get the ring in place. It wasn’t until i saw someone do it and not get the ring fully seated that I understood what was going on.

Long story short, use a socket that is big enough to fit over the spline and an arbor press and you are likely to get it to seat correctly. If you try to just use a snap-ring/e-clip tool it is possible you wont get the clip all the way on. You may even inspect it and observe no gap and think you have done it correctly.

I have seen that sort of issue before, but never thought to use an arbor+socket to press the ring down. Thank you!

Using a socket + arbor press (or honestly a mallet depending on the application) is an easy way to press on self-locking retaining rings as well: 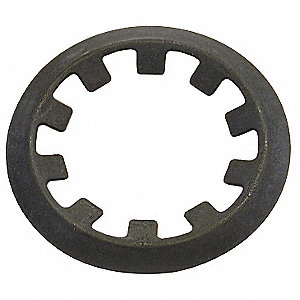 How you say… womp womp.

A pulley mounting screw came loose on the elevator, was ingested into the spool, and severed the winch rope. Not a huge deal to fix thankfully, but we revisited the importance of using loctite and checking critical fasteners regularly.

Our robot cart’s wheels had seen better days, so a part of our team decided to replace them with what we had on hand… 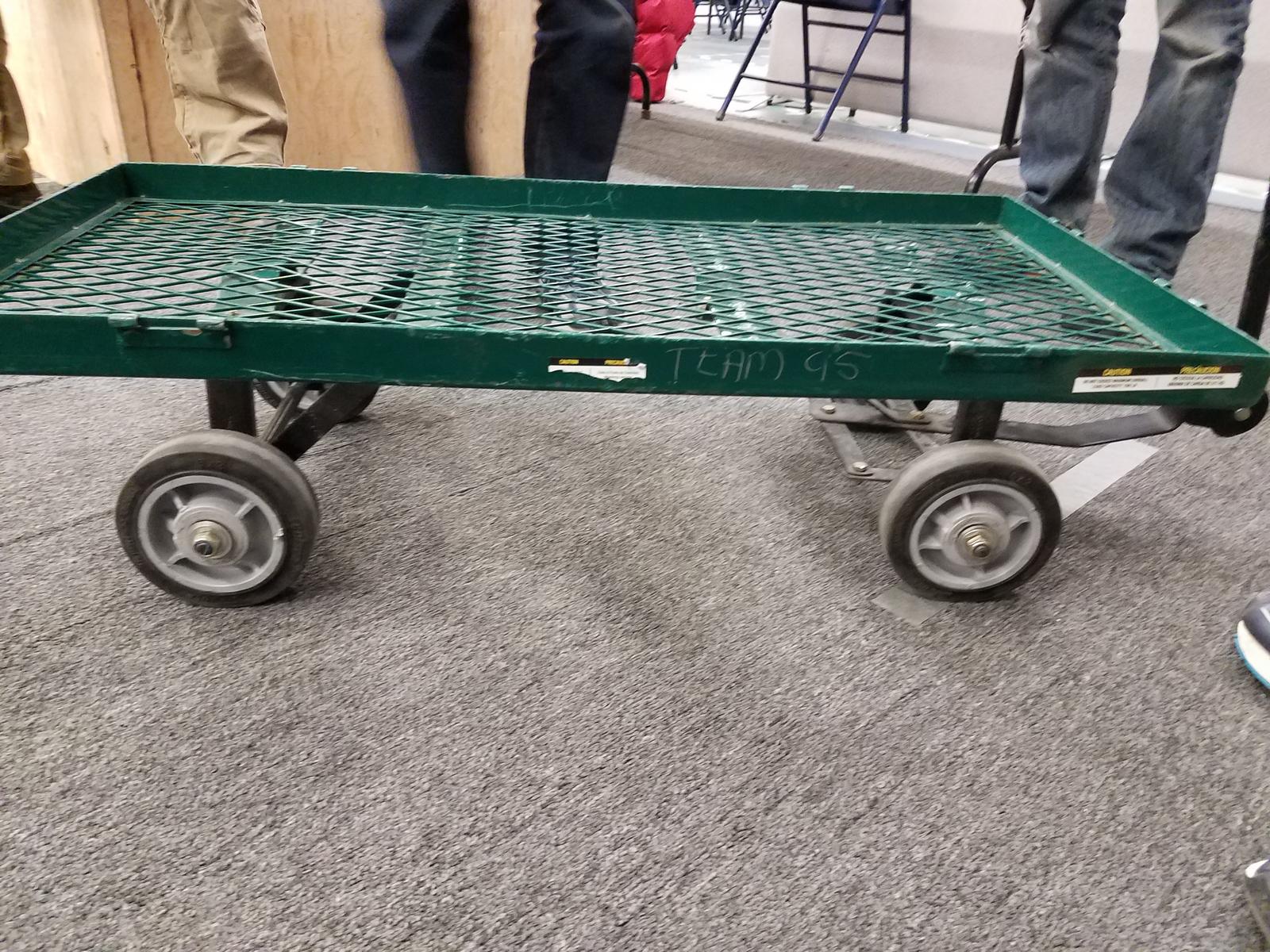 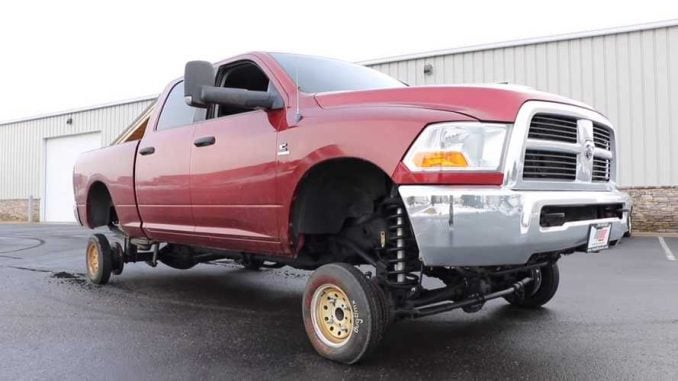 As many of us are at this time of year, our programmers were getting a bit frazzled, resorting to unique ways of ensuring code deployed properly. 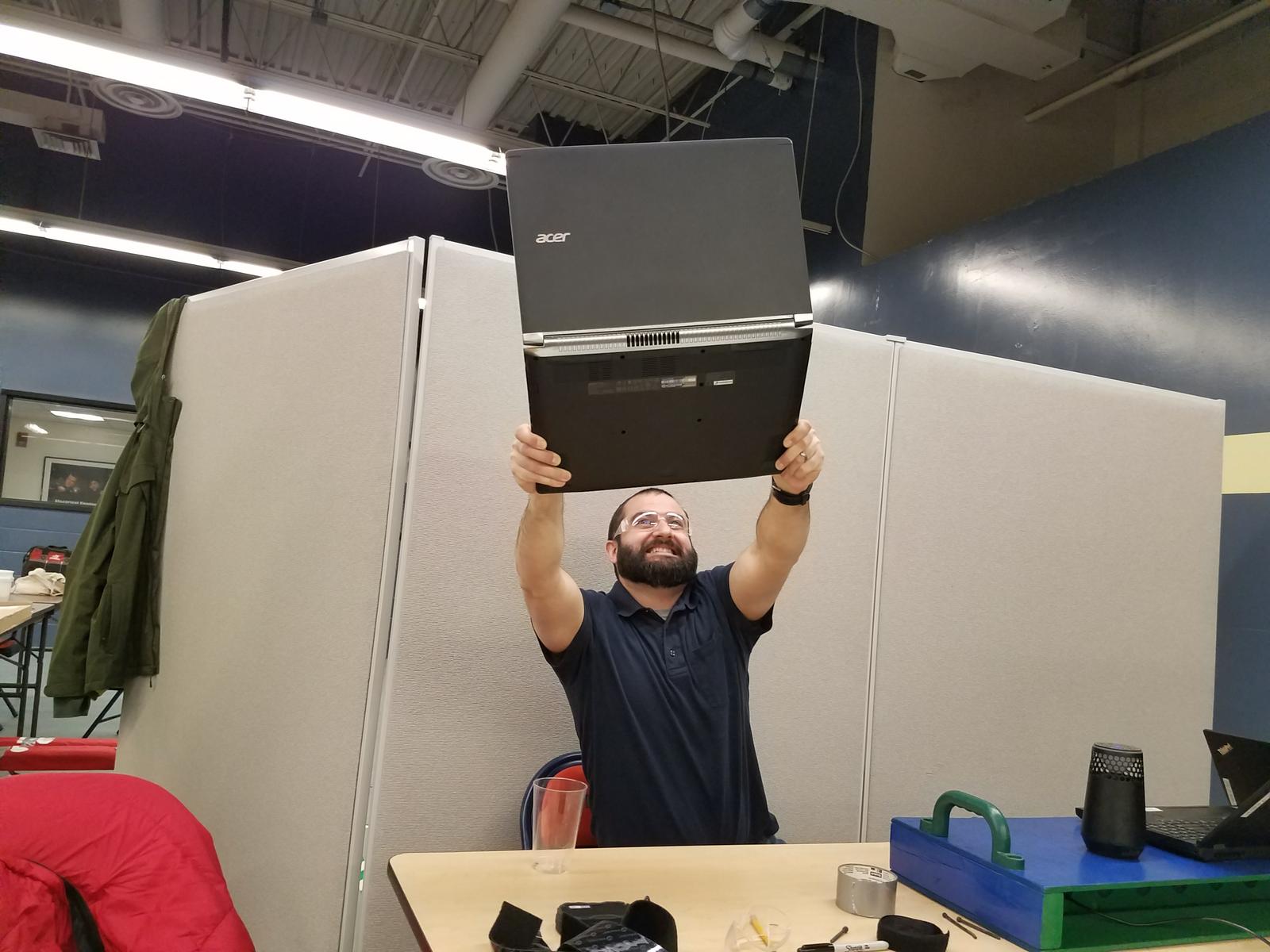 Right now we have most features working reasonably well. We are missing the automation we want for our ground hatch loader, vision-assisted alignment, and a HAB 2 or 3 climber. Hopefully we can sort out 1 or 2 of these features during unbag time before GSDE in less than 2 weeks.

A few pictures before we bagged Cecilia: 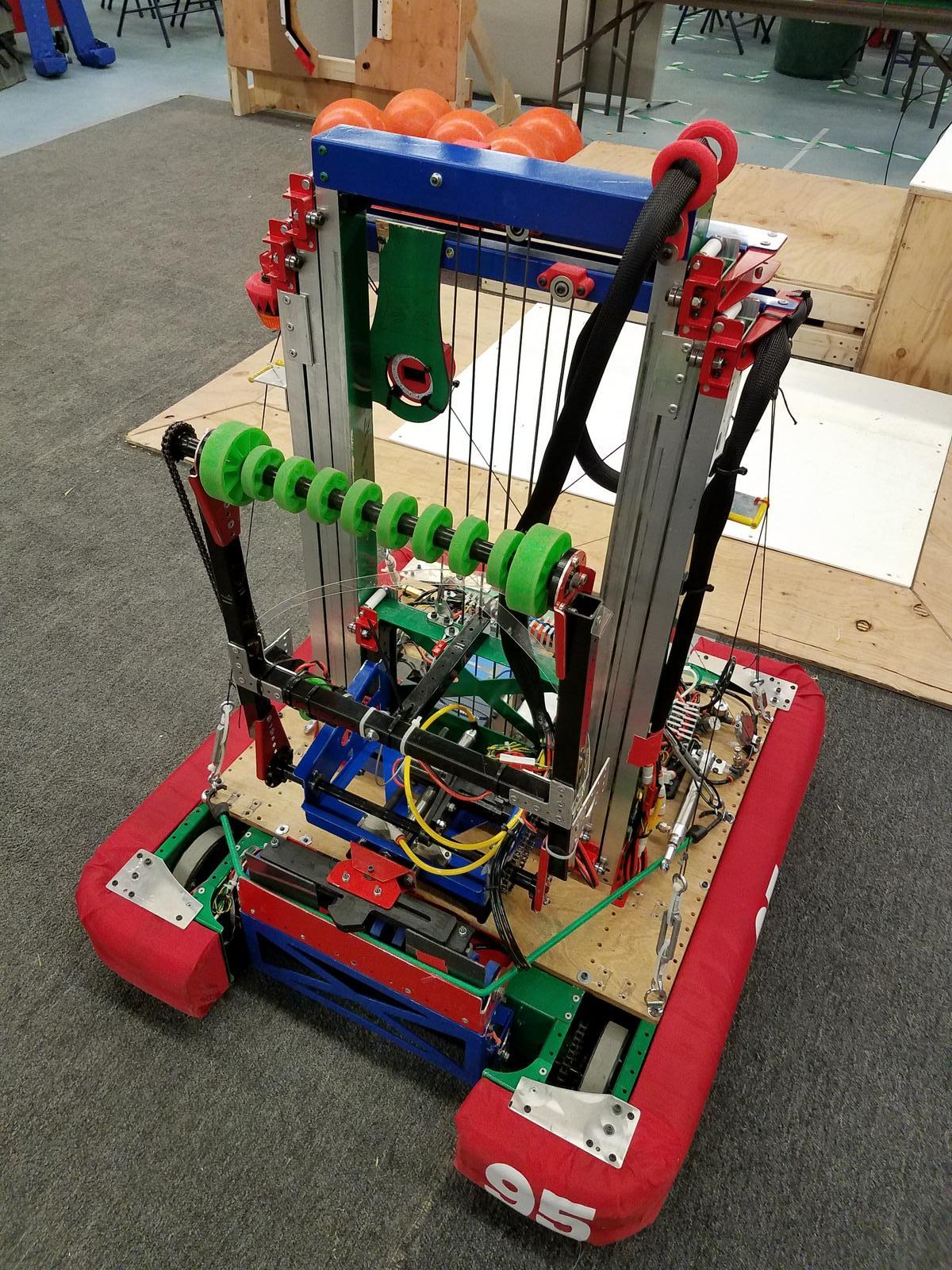 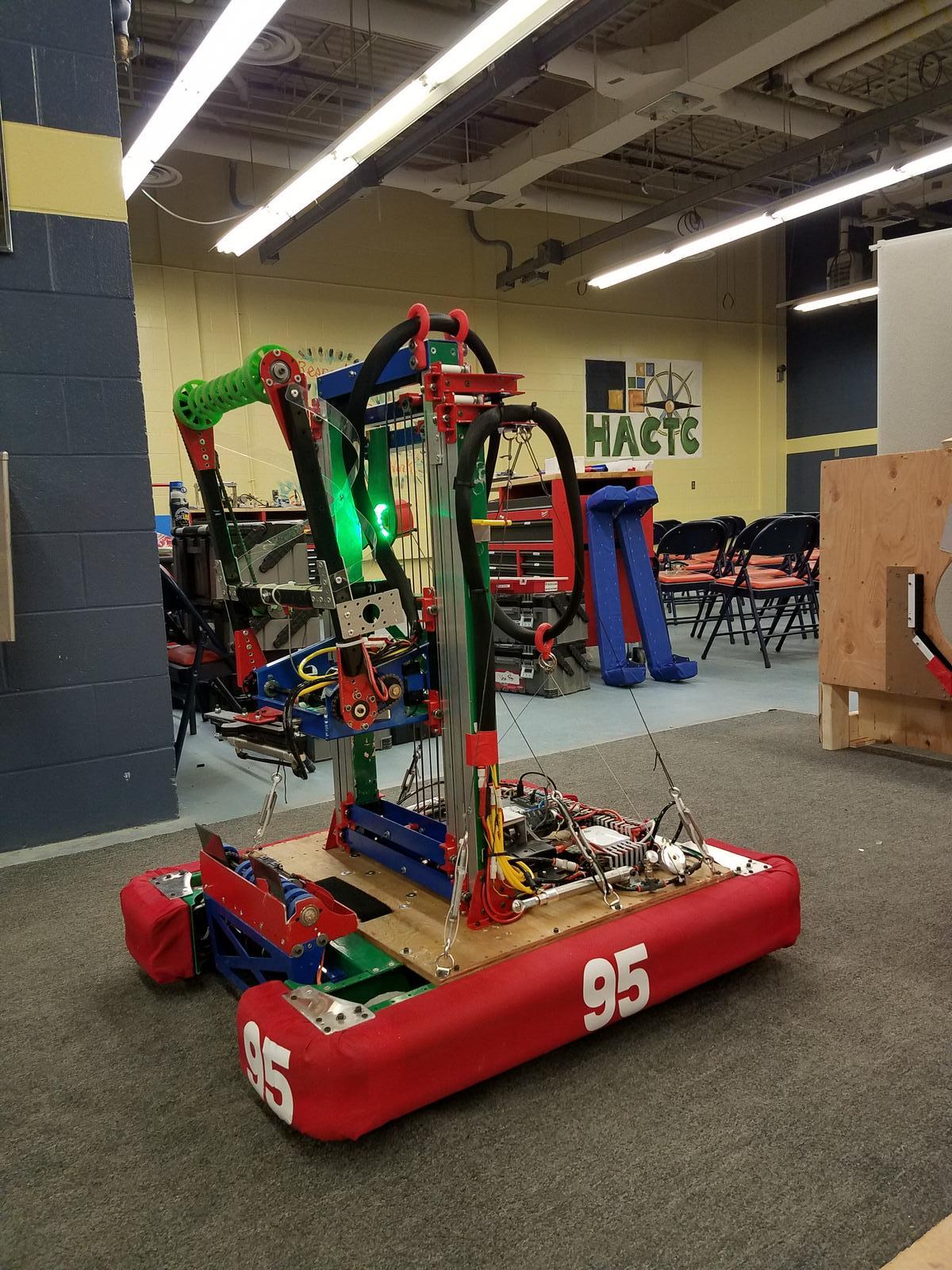 We opened up our bag and… 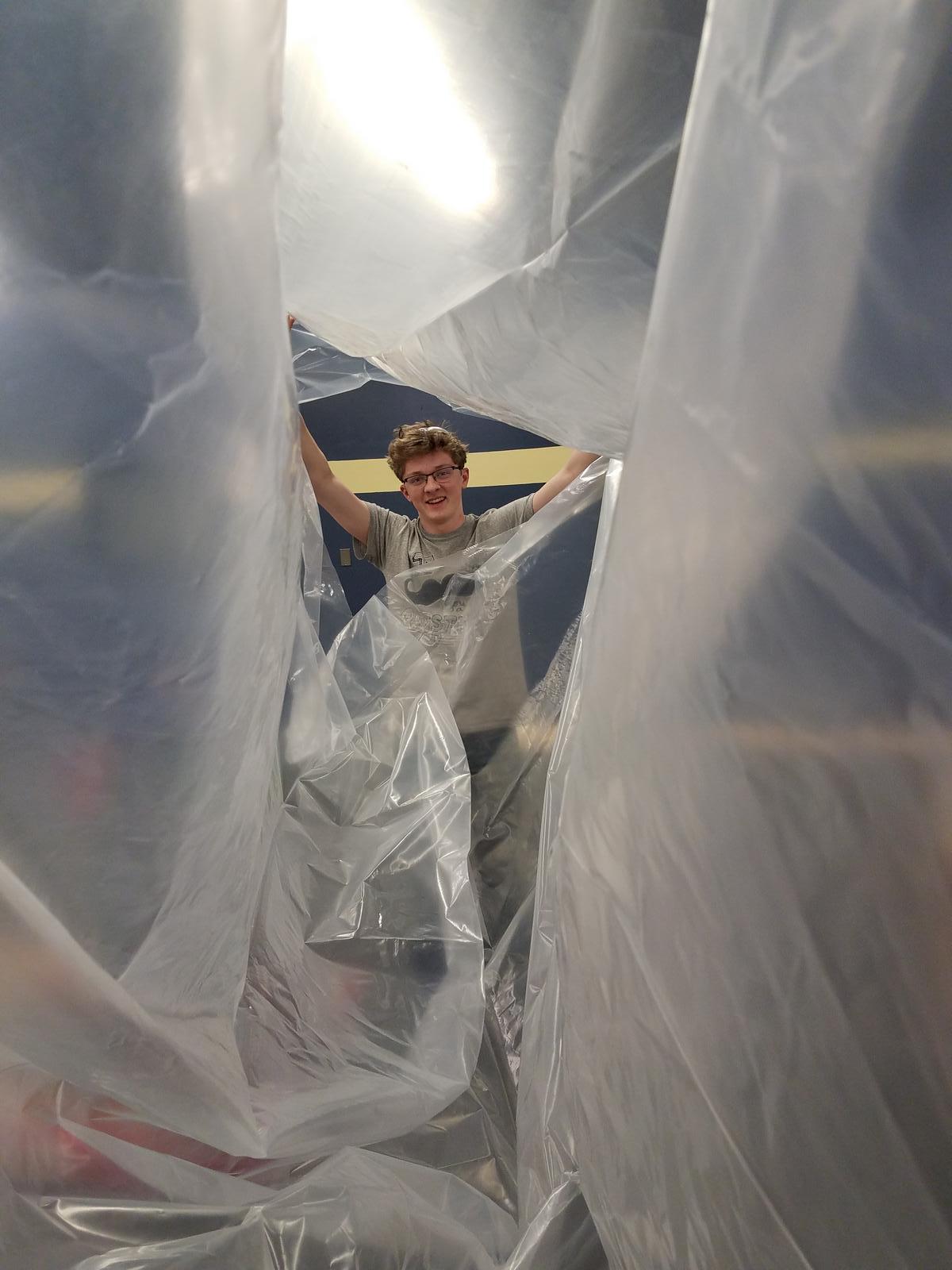 Well, it was really more of a tube than a bag… 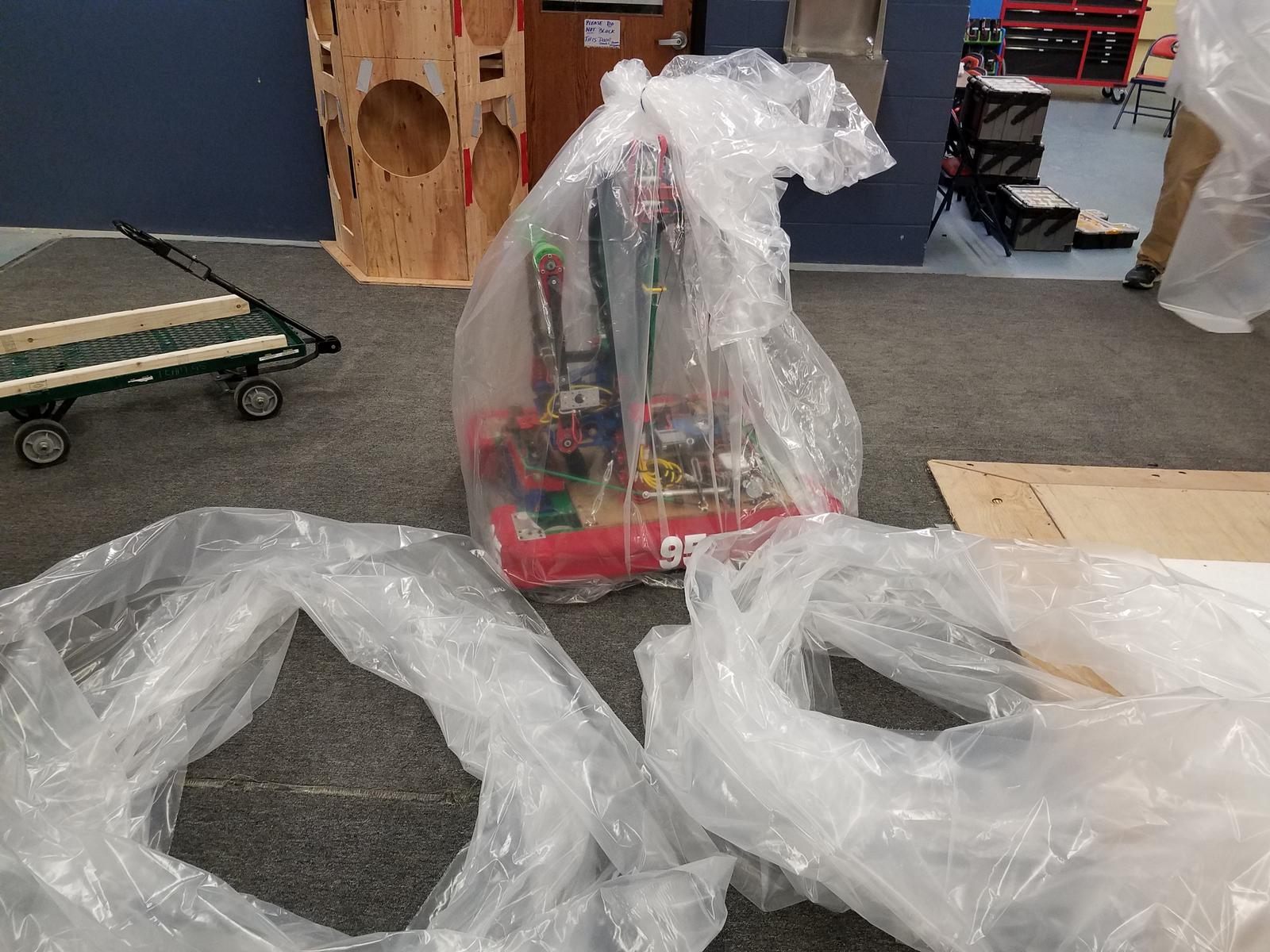 Third time is the charm apparently!

Wanted to thank you for all you’ve shared this year. After our half-baked hatch plans went down in flames (in Week 3 this year instead of Week 5 so that was nice), we studied the hatch grabber files in your Onshape and fabricated a similar one out of our preferred plastic (Sam’s Club cutting boards–they’re cheap, easily machinable, and can appear in our shop on a half-hour’s notice). Works like a champ! 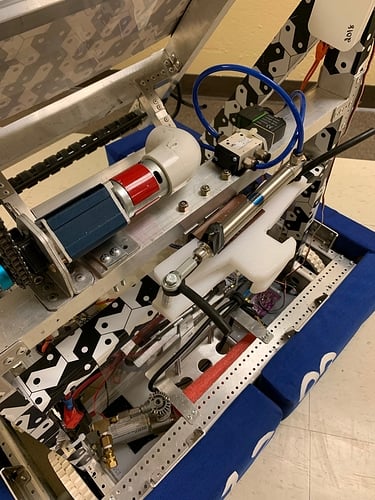 I like the spring-return modification that you guys made, that’s a good tweak! Thank you very much for sharing.

Thanks! For some reason, it didn’t hit us until it was on the robot that the solenoid was only going to drive the cylinder one way. We’ve since acquired a spring return cylinder we may swap out instead, depending on how tired we get of adjusting the surgical tubing.

I love the integration of this!

I have to ask, what is the purpose of the PVC on the backside of that redline? I’m going to assume it is to direct the airflow, but why?

I was astounded at how easily it integrated. We originally mounted it to the Walnut bar below that’s wrapped, but it hit too low so we flipped it upside-down. This thing would be excellent cheesecake; our fabrication method was to print a 1:1 drawing out, tape to cutting board, and cut it out with a mixture of the bandsaw, a jigsaw for some inside cuts, and a Dremel for the slot. We made a second set of plates that needs a longer stroke, and we may yet build that up as a full spare once we have another bracket bent up.

As for the PVC elbow, it’s not for airflow but for protecting the terminals on the RedLine. We ran them on our 2018 robot as well (no really, same physical part) and suffered no damaged RedLines on an intake that spent all match outside the frame. I forget the pipe size (1.5"?), but it’s a nice snug fit. Maybe eventually we’ll ball out with connector boards, but this is a very solid middle ground.

Well, with some of our unbag time we got a lot of driving practice in. 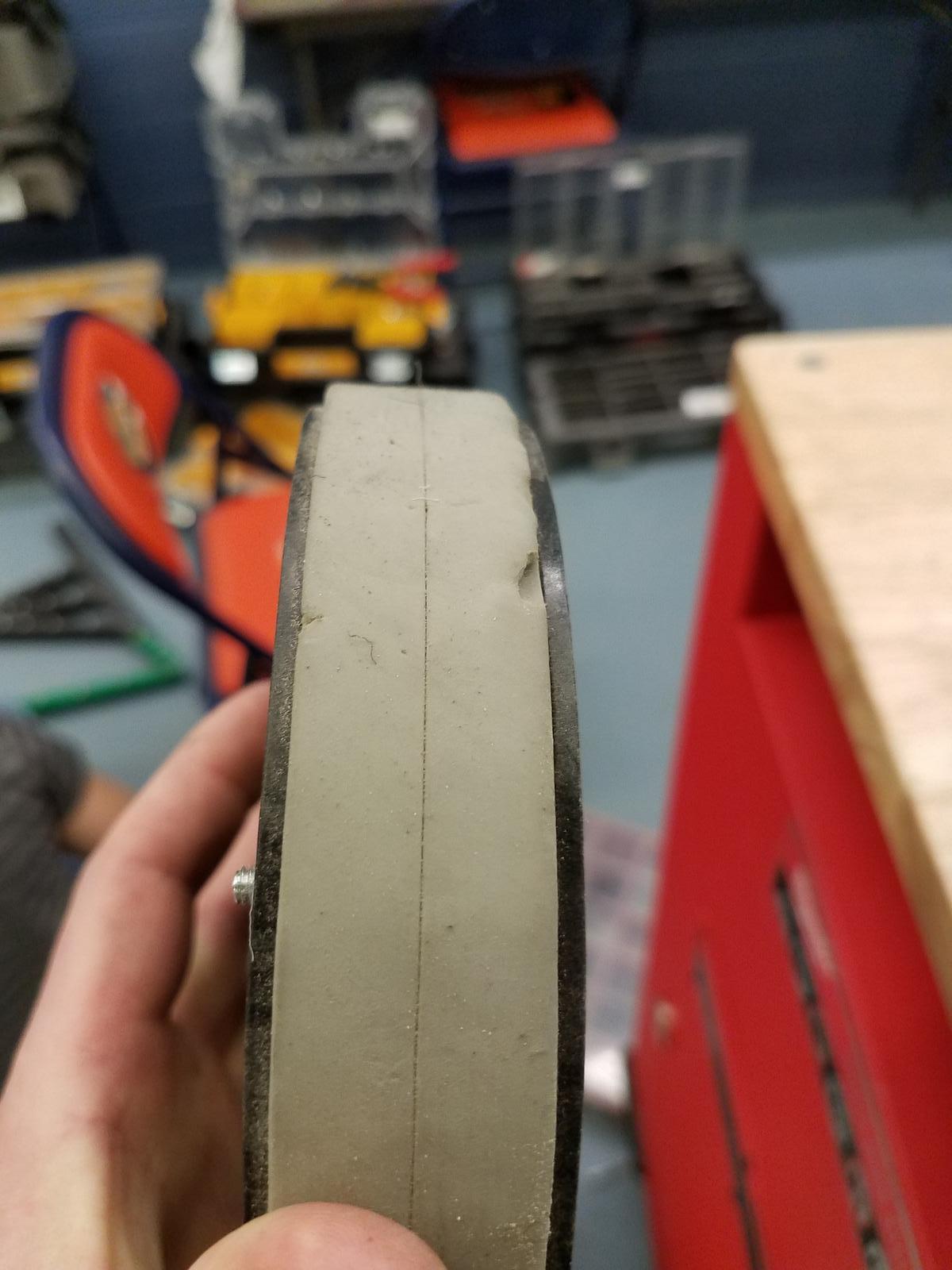 A number of smaller, subtler, tweaks to the hatch and cargo mechanisms have been implemented.

Our HAB 2 climb efforts were… frustratingly unsuccessful though. We made a version of our skids to wedge us onto the HAB 2 platform and added our back up interstitial axle. 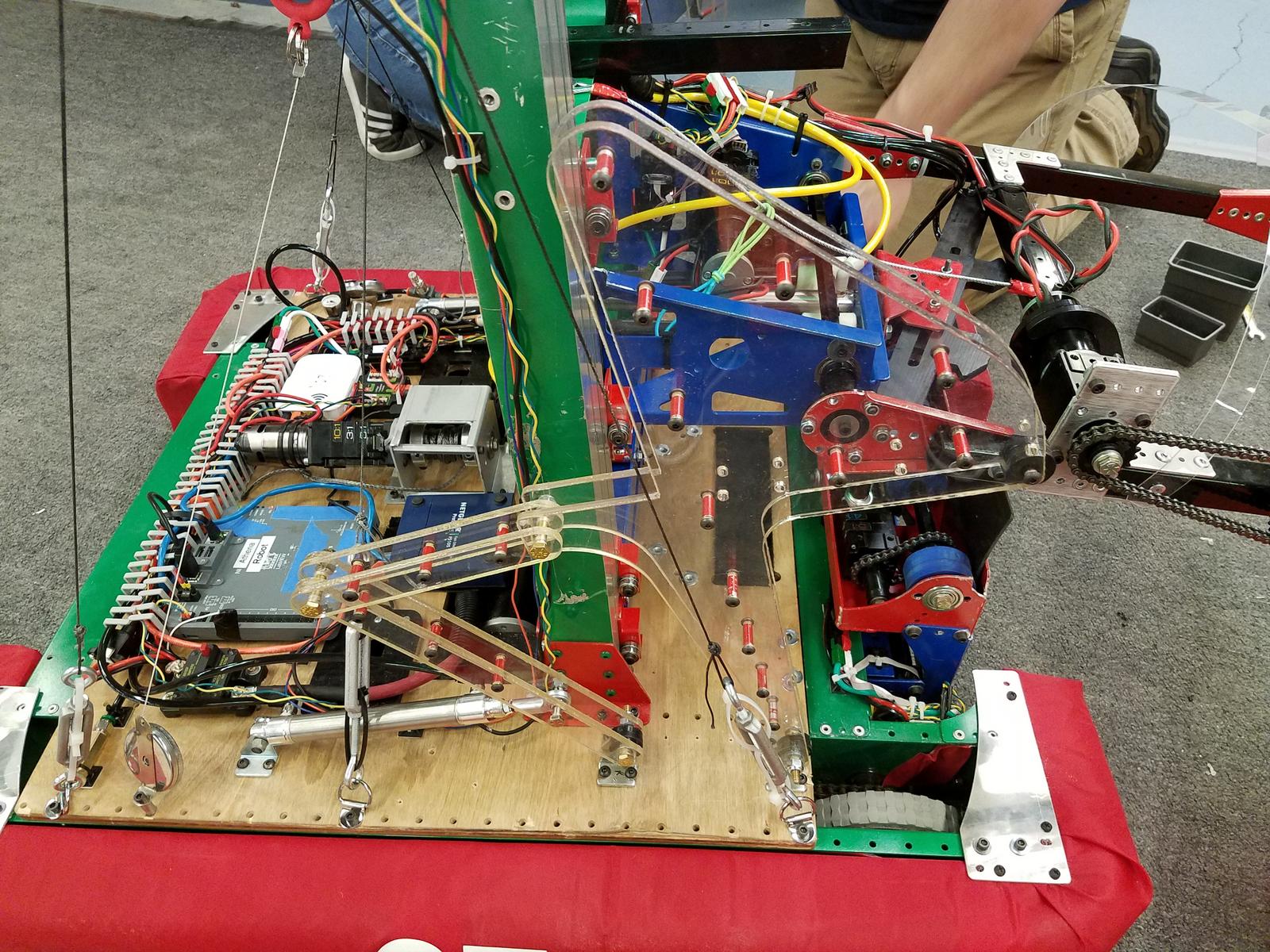 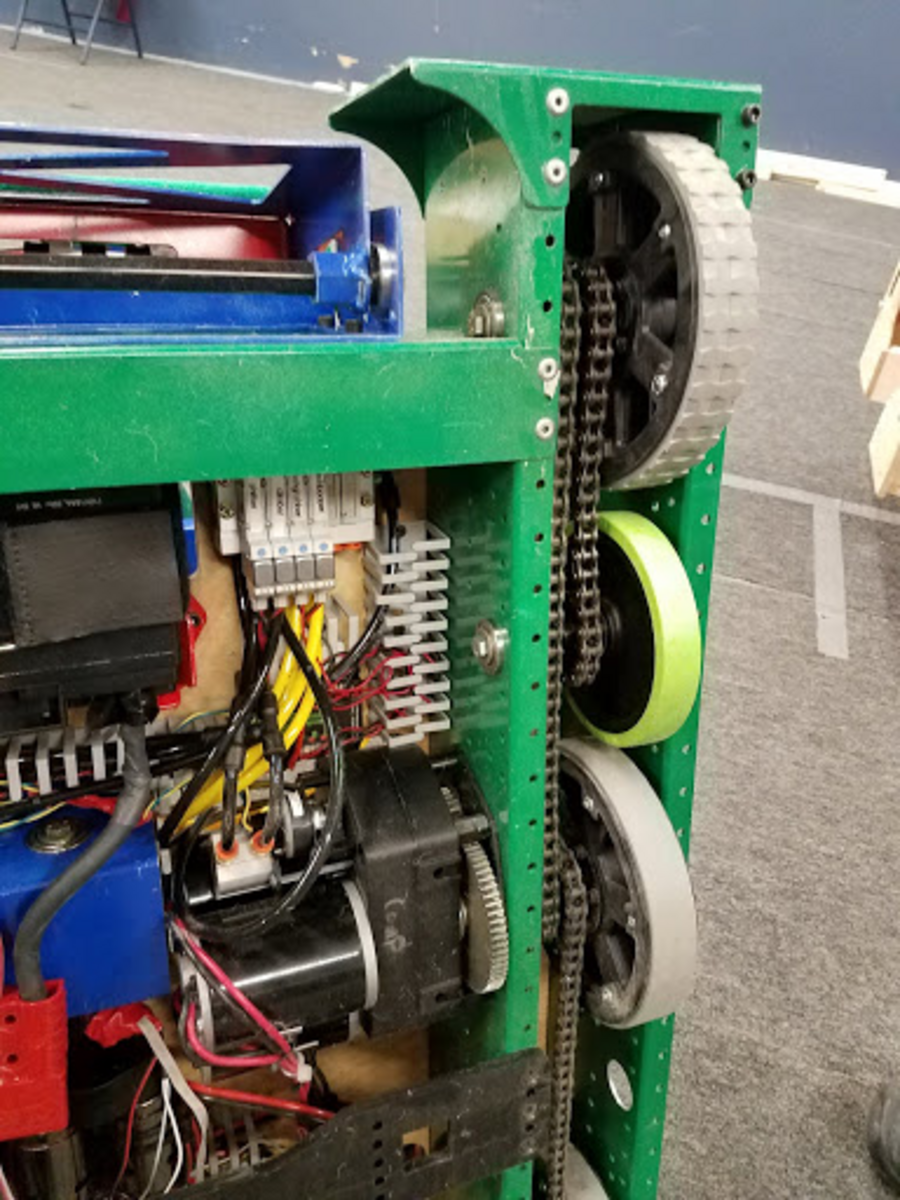 However, the skids buckled despite being thicker plastic, and the interstitial axle wasn’t quite enough to get us there. We’re going to get some air cylinders to jack us up onto HAB 2, hopefully we can get them setup on Wednesday night.

Well, GSDE was a bit of a mixed bag for us. On one hand we finally got into a decent stride with cycling hatches and cargo from nearly anywhere on the field. On the other hand we had a lot of hiccoughs getting there, likely a result of limited drive time before the event.

Our camera had gotten knocked out of alignment when getting brought to the event, so our first few practice matches were particularly derpy.

Sight lines on the field were… different than we were anticipating. We could generally see some of what we needed to, but it is challenging to line things up well. I think our drivers adapted well. When driving from the center station I would spot the hatch pickup for them, which improved our cycle time and dropped hatch rate significantly.

We added a racing stripe centered on the front of our robot. This gave our driver a fiducial to center on the white stripe when approaching the rocket. 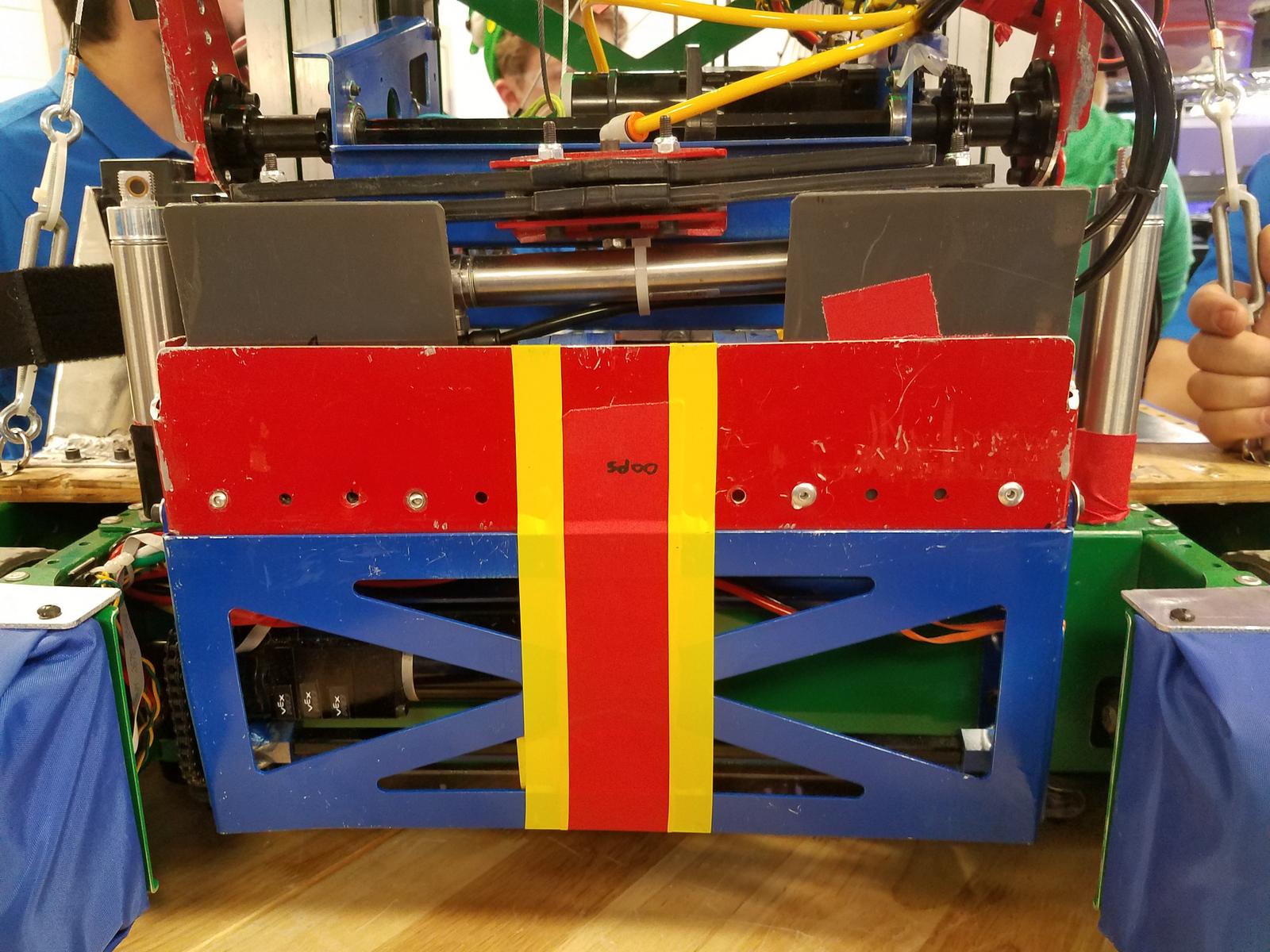 We did get a simplistic HAB 2 climber going, and it worked the first time we tried it, amazingly. However, it took 20s or so of extra drive time to score it, so we never used it again because it was worthwhile to score 1-2 additional game pieces.

During one match we had a controls issue, where the deploy button for the front HAB 2 skid was pushed when the robot was disabled before the match, and then fired first thing in Sandstorm. This resulted in us being immobile for the entire match despite 131’s best efforts to help us out. 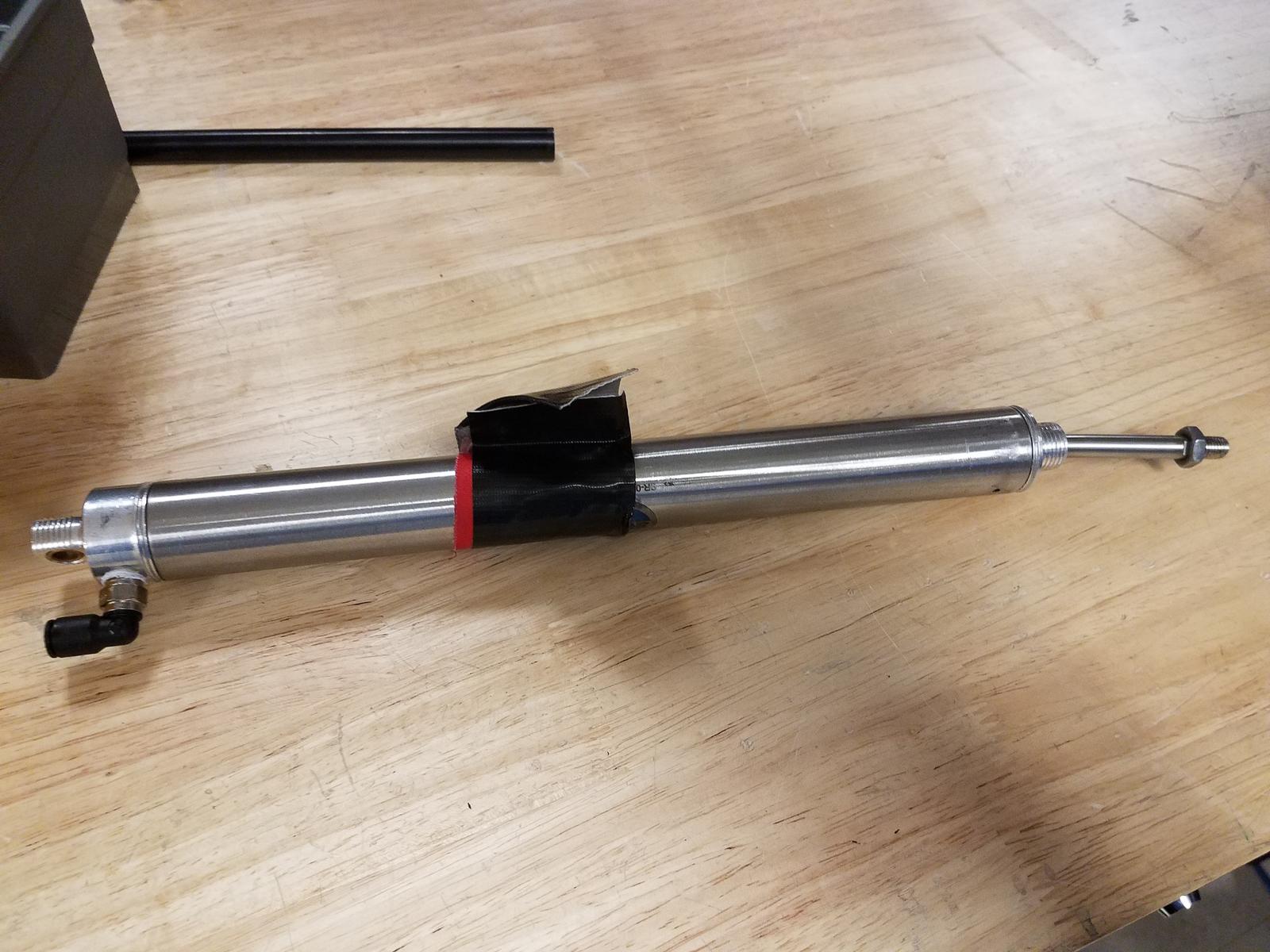 After this incident we completely removed the HAB 2 climber.

During the quarter-finals and semi-finals we even managed to shear some chassis rivets, break our cargo cross-bar, and break our hatch grabber. All likely due to the defensive focus on our team. No hard feelings though! I would have done the same thing from the other side of the glass. We managed to get everything fixed up before every match.

The biggest problem that we had at this event was batteries. The 3-port chargers we purchased from AM several years ago seem to have failed, damaging some of our batteries . It was intermittent and difficult to track, but occasionally we would get brown-outs without having driven a hard match. We need to investigate further. It was a wildly frustrating problem to try and diagnose, and we’re still not 100% sure of the root cause. The especially frustrating part was that we thought we had solved it part-way through Friday with some new chargers, only to have it occur again in our last semi-finals match.

In between events we are planning on doubling-down on cycling proficiency and stop expending effort on any HAB climbing solutions. We are a ‘two-thing’ team I think. We can do two things well, or three things poorly. We have brain-stormed some improvements to both our Hatch and Cargo mechanisms and hope to test them out in our unbag time next week.

I’d like to thank our alliance partners 6329 and 2084. You guys were great to play with, both on the field and behind the glass. We wish you the best of luck in your future events!

I almost forgot: we got our automatic ground loading and hadoff mechanism sorted out.

We had a ball working with you guys. Despite a lot of bad luck (comms, field breaking, robots breaking)I think we put on a pretty good show in the semi-finals. Can’t wait to see you again at DCMP!

Our hatch mechanism actually had a similar problem before we added more supports, beefed up the piston, and allowed it to pivot.

Some possible mechanism upgrades for our next event. Some inspiration from 78’s reveal video. 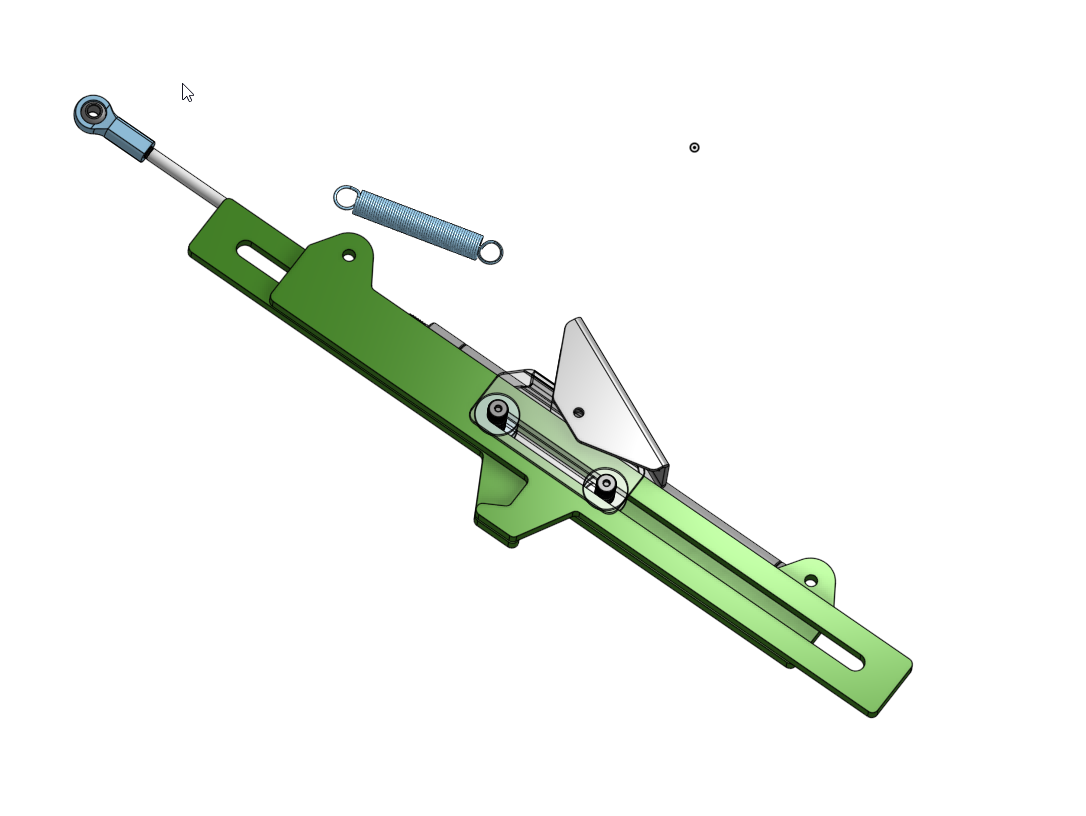 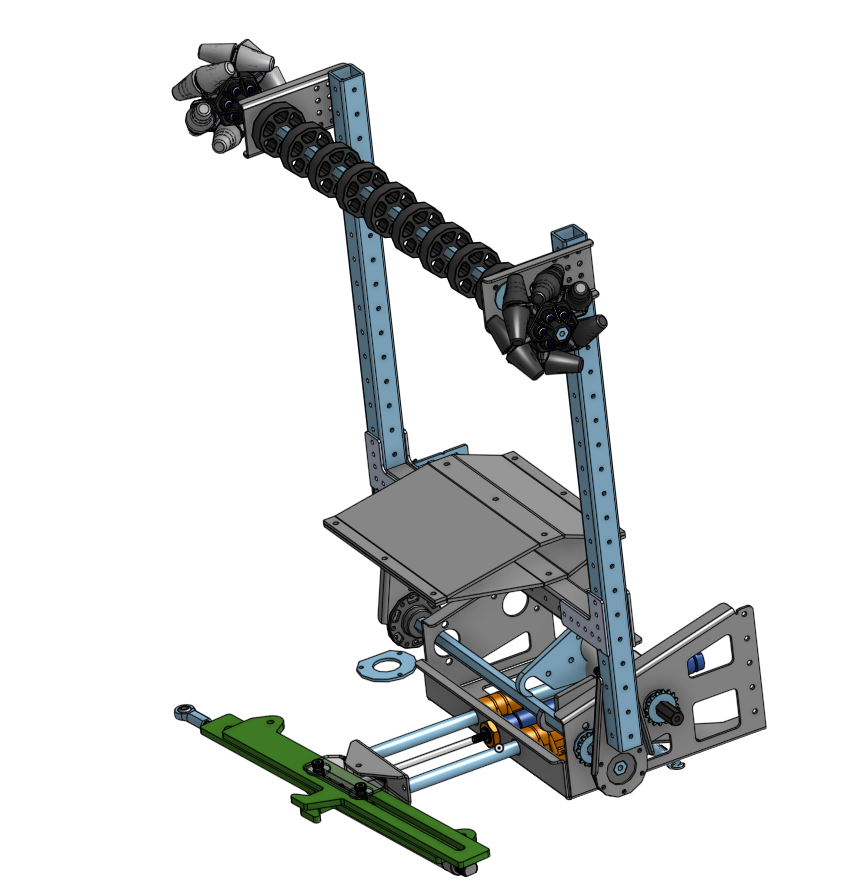 I like how 78 managed to stop the disc from flopping in the mechanism, without beefing it up too much. I’m heavily interested in further disc manipulator developments.

Hi James, how do you land your #2awg DC wiring in the PDP? I’m finding the inputs are very tightly sized to the #6awg lugs provided in the KOP.

We grind down the sides of the 2awg connectors to fit on the PDP, as do a number of other teams.

We did that for our week 1, it physically makes sense to me, and I’m willing to sign off on it as the team engineer. It doesn’t send a great message to my future-electrician students, who definitely should not be modifying equipment like that professionally.
(That objection is a little bit hypocritical, because I swaged the six gauge power poles to more easily fit 4 gauge wires already.)

The other option I’m thinking about is using a splice to go from 4 to 6 before it hits the PDP lug. But I really don’t want to introduce more crimps on the main harness, I think that is asking for quality issues.