Despite the modifications to the 2021 season, the FRC Control System Team is still working on improvements to the software provided to teams and would like to invite teams to assist with Beta Testing those improvements. We’re looking for 20-25 teams per software language to participate in our annual FIRST Robotics Competition Control System Beta Test to help shake out any bugs in our updates to the software before the season.

This year these changes include improvements and translations of the software documentation site, improved basic simulation and unit testing capabilities and more. Beta Testing will begin in late October and have specific task deadlines through the end of November. Teams may continue to test through Kickoff, but software starts to lock in early December so testing done in December may not be done in time to fix any bugs discovered.

Teams may apply to Beta Test 2021 software even if they are not yet sure of their plans to participate in the 2021 season. Teams do not need access to their robot or control system hardware in order to apply.

Interested teams should fill out the form here. The initial deadline is October 23, however the form will remain open and teams may be admitted on a rolling basis until capacity is reached. Teams should receive notification of selection status no later than 72 hours after the initial deadline if submitting before the deadline or 72 hours after submission if submitting after the deadline.

The FIRST Robotics Competition software has a feature called ‘usage reporting’ that tracks what WPILib objects are created in each team’s code and reports that data back to the field when the robot is connected. Data from the 2020 season can be found here. Some notes about the data:

Some stats for those who want them 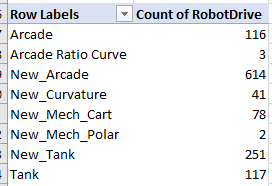 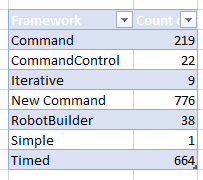 Is there more detail about plans for the simulation mode. Given the need for remote work, I was hoping the simulation mode would be enhanced beyond the “control panel” operation provided in 2020. The control panel was very helpful in debugging prior to using our actual robot. However it would be nice to see our code operate on a simulated field.

WPILib has been working on a high fidelity 2D simulator. However, if your looking for a game style 3D field, none are available that works with WPILib (Autodesk has a somewhat kinda functional one).

However, WPILib has introduced WebSockets that interface with our simulation API so accessing WPILib simulated features cross-language is an option. Hopefully we’ll see some organizations implement something of the sort.

As far as I know, there is no official plans from FIRST or WPILib for a 3D simulator.

Some takeaways and fun outlier teams I found:

Again, the usual caveat - this is how many X their software declared, not necessarily how many were actually on the robot.

Dalton,
Thanks for responding. 2D is all I am interested in. I see a call to Field2d in the simulation package. Is there going to be more added to this package for the 2021 season? Perhaps some sample code on how to connect code to the 2D simulator.

What objects would these have been in WPILib? We used a pixy last year, but we rolled our own using I2C because we were unaware of anything built in.

I think you would have to report it manually. The Java library some team made at one point might have done it, but I don’t know if that’s still being maintained.

Is there going to be more added to this package for the 2021 season? Perhaps some sample code on how to connect code to the 2D simulator.

Because state-space notation allows us to compactly represent the dynamics of systems, we can leverage it to provide a backend for simulating physical systems on robots. The goal of these simulator...

We don’t really have docs on Field2d yet. We added a thing called Mechanism2d for a visual representation of the physics backend, but the JSON format for that is undocumented.