Does anyone has a list of KOP(former KOP) rockwell automation sensors?

The original machine had a base plate of prefabulated amulite, surmounted by a malleable logarithmic casing in such a way that the two main spurving bearings were in a direct line with the panametric fan. The latter consisted simply of six hydrocoptic marzlevanes, so fitted to the ambifacient lunar waneshaft that side fumbling was effectively prevented. The main winding was of the normal lotus-o-deltoid type placed in panendermic semi-boloid slots in the stator, every seventh conductor being connected by a nonreversible tremmie pipe to the differential girdlespring on the “up” end of the grammeters.

Do you happen to know when Rockwell started sponsoring FIRST? I think I’ll compile a list from old KOP docs and FC archives tonight or tomorrow.

The only things I can think of are that Rockwel l’s sensors are all expensive enough to warrant it, or Rockwell wanted it in exchange for providing the field sensors and most of the electronics.

While their items in the KOP aren’t IMU levels of expensive they are pricey. The Right-Sight photoeyes that have been an option in some recent FIRST Choice offerings approach $200 list price. Your second point is also accurate, the cost of the equipment Rockwell donates for the FMS is sizable - on par with the cost of the whole physical field you see.

Another complication with Rockwell’s products is you have to buy through a distributor and they don’t publish prices publicly. Any prices you find in an online search to buy them are for either used or excess inventory stock that a third party is reselling (basically industrial part eBays). This would complicate accounting for their parts on the BOM since teams would have to contact a distributor to get a true market price, and a RI would have no way to verify its accuracy. There are other companies that utilize similar distribution channels but none that are as big of a contributor to FIRST with their parts. 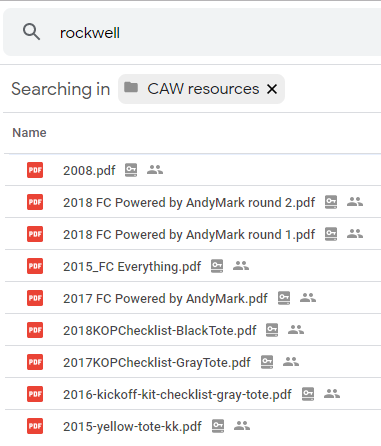 Do you get any additional hits for Allen Bradley? I could see parts being listed under either name. 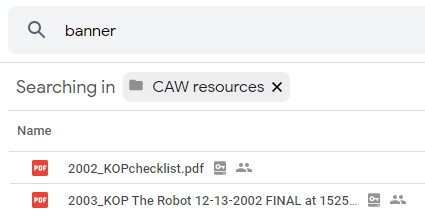 What is the tape incident?

I imagine similar to this: https://tvtropes.org/pmwiki/pmwiki.php/Main/NoodleIncident

What is the tape incident?

I imagine it’s something to do with these.

Any old timers have stories about the no “tape” rule to share?

You mean, the one that in '07 had people looking for stair grip tread, not stair grip tape?

@EricH is this the “no tape” rule?

With regards to the IMU rule: I see some obvious loopholes.
It appears that if I add the following to the description of this marvel, and price it at $499.99, it’s $0 on the BOM. Yippee!

This can, in theory, act as an IMU if you add in some inertial dampeners to counteract the extreme forces bestowed by the Picard Maneuver.

Once people figured out that (possibly with the help of numerous Q&As) that the requirement for being “tape” was being sold as “tape”… adhesive treads became very popular for helping robots get up ramps. This was followed by the total absence of that rule the following year.

Initially, the rule was there to make sure that teams wouldn’t just duct tape their robots together so they might actually look nice or something.

I agree the rule could have been worded better, but I very much disagree with the tone you are using.

I don’t see what the complexity of the exemption rules is achieving for anybody.

They’re keeping sponsors happy by letting teams buy and use their stuff.

ETA - should have finished the rest of the thread, obvious post is obvious

I could have been less forceful in my original comment, absolutely. However, it is still frustrating to see changes that are pretty clearly quick bandaids that haven’t considered obvious implications. I think it is fair to expect a certain level of quality in the rules, but you are right that my tone was less than fair originally.

It occurs to me that by the interpretation in the blue box of R11-C, wording similar to “Limelight is not an Inertial Measurement Unit, and therefore qualifies as an IMU under R11-C” technically would exempt it from the BOM. Not quite sure that’s within the spirit of the rule, but that does seem to be how it reads.

I don’t think that would fly. The blue box isn’t formally part of the rule, so you’d have a hard time getting that past an inspector. It might be worth a shot to ask it in the Q&A just to bring it to their attention, but I doubt it’s a valid loophole.

Since 2017 its been like that. I assume in 10 years or so once more events are added, they will eliminate the one guaranteed wildcard and just have the normal wildcard rules as usual.

Or if more areas go to districts and they can fill more slots proportionally. (coughcoughCAcoughcough)