The calendar has rolled over to September which, for the FRC Control System team, means it’s time to start thinking about beta testing! We’re looking for 20-25 teams per software language to participate in our annual FIRST Robotics Competition Control System Beta test to help shake out any bugs in our updates to the software before the season. This year these changes include a new software documentation site, a re-written Command Based programming structure (don’t worry, the old one will stick around for now!), some new kinematics and control classes, and more. Beta Testing will begin around the second week of October and have specific task deadlines through the end of November. Teams may continue to test through Kickoff, but software starts to lock in early December so testing done in December may not be done in time to fix any bugs discovered. Interested teams should fill out the form here by Sunday, September 22, 2019. Teams should receive notification of selection status no later than September 27, 2019.

The FIRST Robotics Competition software has a feature called ‘usage reporting’ that tracks what WPILib objects are created in each team’s code and reports that data back to the field when the robot is connected. Data from the 2019 season can be found here. Some notes about the data:

1 Like
FRC Screensteps/Documentation is getting a successor!
Can CIM's compete anymore?
marshall September 10, 2019, 8:19pm #2

I wonder who that could be… though the LabVIEW thing is questionable, we gave that up years ago.

The fact we’re up to 77 Python teams is super interesting. Additionally, ~18% of teams used Spark Maxes over CAN, which is super neat to me.

Some brief number crunching/looking at things compared to 2018, and singling out what rookies are doing.

To be fair, there’s a reason we rewrote it from scratch for 2020.

I don’t think it’s counting all of the command-based as command-based for some reason… I’m pretty sure 1885 is my team, and we used command-based, but it shows up as Timed. Maybe we had to do something specific.

It won’t report correctly if you called Scheduler.getInstance() before the TimedRobot constructor ran. The FMS stores the last framework value sent.

Additionally, ~18% of teams used Spark Maxes over CAN, which is super neat to me.

I’m not super involved with the controls side of things, but why is that interesting? Isn’t that the standard way to use a Spark Max?

Yes, using Spark Maxes over CAN is the “correct” way to use them, but not the only way. Some teams opted to control them over PWM due to the CAN interface being lackluster earlier in the season. My main point of observation was that 18% of teams took the plunge on brand new hardware never used before in FRC.

You’re right Tim, that is interesting. Putting that into perspective, that’s roughly equivalent to the percentage of teams using LabVIEW. 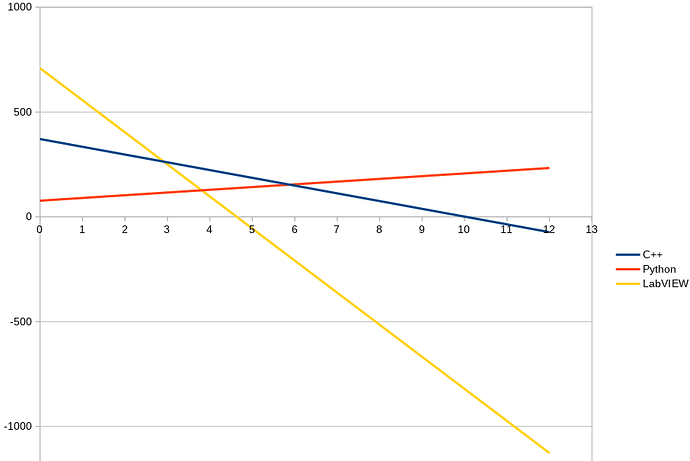 A bit more on the changes coming this season.

Note that this does not constitute an official change log, and I probably have missed a few things. Things are still being changed and pull requests merged. We’ll be happy to respond to any questions. An official change log is currently being worked on.

There’s trapezoidal motion profile support and the ProfiledPIDController class for 2020 as well (you give it an unprofiled goal and it constrains the change in setpoint over time to the max velocity and acceleration). It’s motion magic/smart motion but on a roboRIO and with the actual industry-standard term for it.

Ramsete drivetrain control and quintic hermite spline 2 DOF trajectory generation are in PRs at the moment and are expected to be merged after we kick the tires a bit and write more tests.

Note: LQR is for controller design, not system identification. The robot characterization tool gives you Kv and Ka feedforwards. We were able to use those to back out an accurate state-space model and design an optimal PID controller via LQR (theoretically no online controller tuning required).

I would very much like to have Python as a supported language. For a lot of us, that’s what we’re used to using at work, and can also find more mentors who regularly use Python.

Ramsete drivetrain control and quintic hermite spline 2 DOF trajectory generation are in PRs at the moment and are expected to be merged after we kick the tires a bit and write more tests.

If these make it in, expect there to be matching commands available, as well

The main barrier to Python becoming official is finding maintainers to port features. We have like two people who regularly contribute to wpilibc and wpilibj as it is. We’ve had a lot of people contributing docs and tests though, which is super nice. A high school student also contributed the kinematics and traj gen impls.

The main barrier to Python becoming official is finding maintainers to port features.

Often I find myself not feeling up to contributing to WPILib due to me not wanting to implement an idea in both Java and C++, for whichever reason that may be. Feature parity is important and that kind of rule is entirely valid, however I do think it’s possible to open up WPILib to be more welcoming to new contributors. I don’t entirely know the solution for it, but I imagine I’m not the only dev who feels that way. Perhaps a stronger use of the Projects tab on GitHub could help? Not sure, though. Is there a Slack that prospective contributors can join? The TBA slack is incredibly helpful for TBA contributors.

Introducing Python is, yes, a lot of work. However, it’s something that I think would drastically, noticeably, measurably - however you want to frame it - positively impact the program. It is the single thing I want next for the program now that bag is gone. More than NY districts. And that’s saying something.

Feature branches. Solved. I won’t even charge consulting fees for this suggestion.

I’m curious to see the performance implications of the new controls features in python though. Python struggled to avoid loop overruns last year even with nothing running due to condition variable overhead in the watchdog code. It’s kind of silly.