The “Kit” has evolved to include more than just what’s shipped in totes at the start of the season; it’s the Kickoff Kits (totes, Drive Base Kit/voucher), FIRST ® Choice, and the Virtual Kit. See the Kit of Parts webpage for more information. 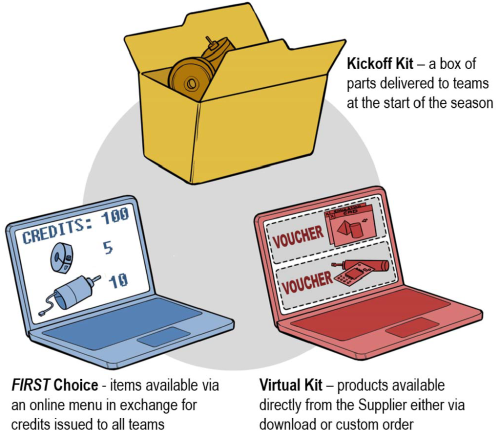 This year, we’re trying something new-ish.

Veteran teams likely remember that you’re invited to opt-out of the drive base and, in exchange, you receive a $450 voucher to use at AndyMark.com. We’re expanding this concept to also apply to the Black Tote (formerly known as the “Everyone Tote”), which for Veteran teams and along with the Drive Base Kit, is most of the Kickoff Kit.

**Veteran teams are invited to opt out of the Black Tote in exchange for $250 in vouchers:**

We are shifting some items out of the Black Tote and into a new container called “Season Specifics.” Season Specifics ship to all teams, regardless of their drive base/Black Tote selections. This info graphic is hopefully worth more than a thousand words in describing what we mean. 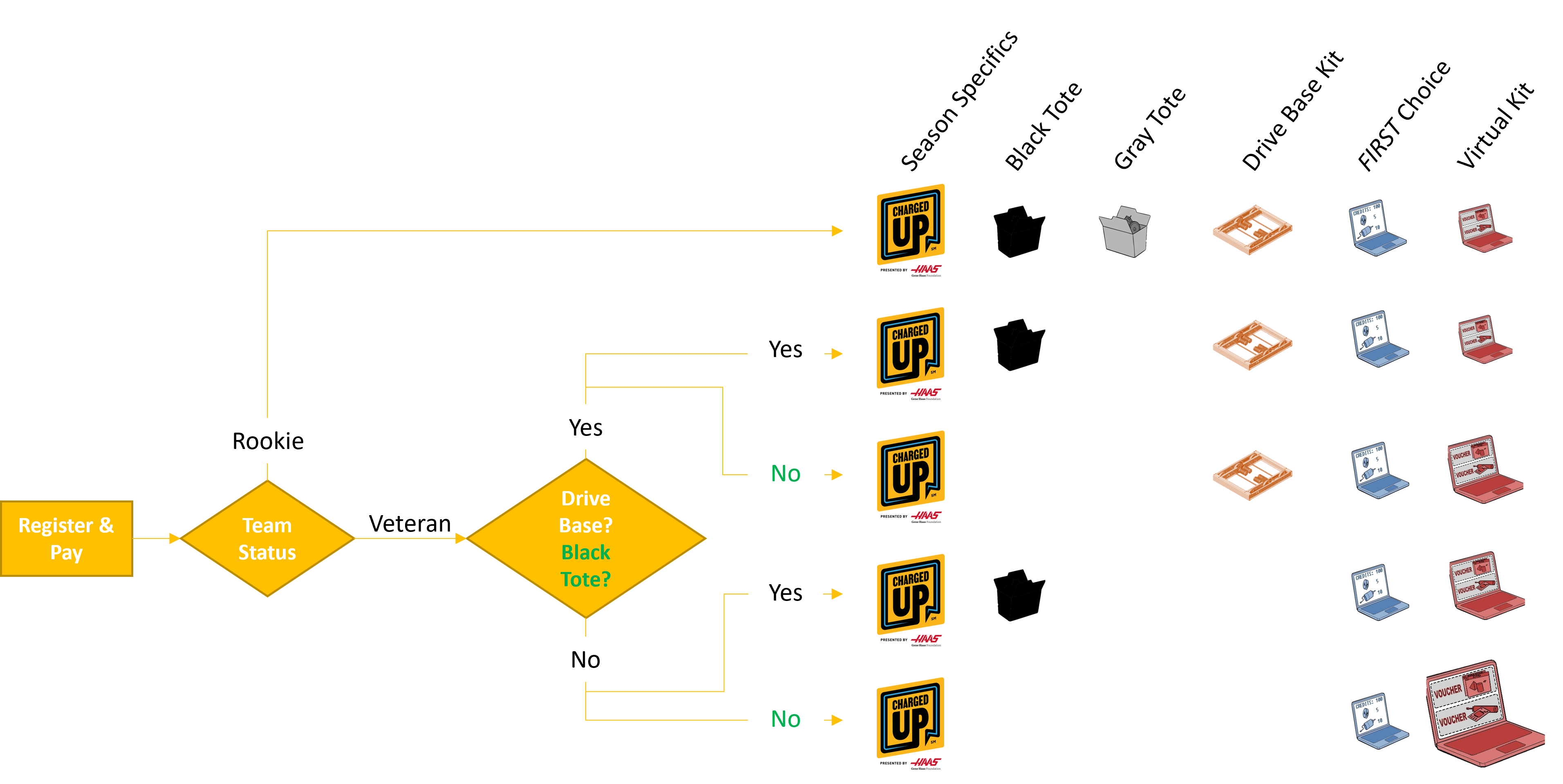 So, what’s in what? Good question.

We’re still confirming some items, and even confirmed material isn’t all at the warehouse for kitting yet (my disclaimer that this is what we know as of today). Contents of the Black Tote are comparable to the 2022 “Everyone” Tote except for 2 large exceptions:

We completely acknowledge that we’re inviting your selection based on what we expect to ship in each container; it’s just not realistic for us to commit unequivocally to contents at this time so you don’t have a complete data set with which to work. We didn’t want that to prevent us from presenting this option completely. We expect that, for some teams, this is an easy decision because of the Kickoff Kit inventory they’ve accumulated over time. Other teams may have a harder time with the decision.

We want to be clear that this decision is optional and irreversible after the deadline. If circumstances cause the Black Tote and Season Specific container contents to vary from what’s presented here, there are no takebacks.

Generally, the Season Specific container is intended to contain only items relevant to that season. For this first year, some donors sent material for the Everyone Tote and reasonably expected their material to go to all teams. For donors in which the “all teams” distribution was a priority, we’re shifting those items to the Season Specific container with an expectation that they’ll shift to the Black Tote in future seasons.

The items expected to be in the Season Specific container include the following:

We expect to pack the Black Tote with the following materials (* limited quantity likely in FIRST Choice):

Hopefully you’re aware that the Drive Base Option has been available in your team’s Dashboard since registration opened in May. The Black Tote Option goes live in the Dashboard on October 6, 2022 at noon Eastern time. Both options close on Thursday, October 20, 2022, at noon, Eastern time.

I leave you with a picture of a picture on the wall of my office, the first Kit of Parts Engineer/Manager distributing his kits. Thank you, Woodie. <3 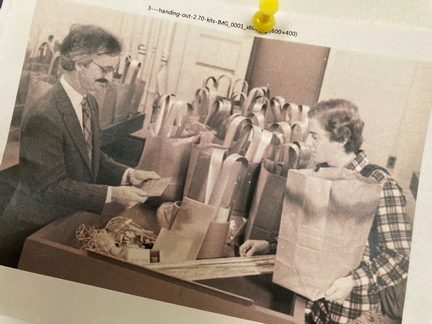 At this rate, we’ll be seeing a blog post entitled “Announcement for Minnesota and California Teams” by the end of the year!

So the main things you’re missing out on by opting out of the tote are the battery, a free tote, and maybe the main breaker if you really want a new one. Kinda feel like the amount for opting out is a low-ball, but it seems like an easy decision to make if your team has been around for a few seasons.

If I’m reading this right, you still get the game piece(s) if you opt out of the black tote?

Yes, I believe that this is Official Confirmation that the 2023 game will involve a “set of game pieces”.

I’m assuming it’s not the empty set, but FIRST has been tricky before…

At this rate, we’ll be seeing a blog post entitled “Announcement for Minnesota and California Teams” by the end of the year!

I really like this as an option, especially as a team that’s been around for a while. A lot of the extra items from the black tote tend to just sit around and collect dust every year.

Only thing I’ll miss with opting out is the Igus stress relief brain.

Can we opt out of the Black Tote but still get the foam brain in the linear track bag? Don’t think I can buy one for $250.

GRIP TAPE? In the black tote?! They just givin everyone the secret sauce now huh

For a team that’s been around a number of years, we already have enough of most of the stuff in the kit that we need. But if we had to purchase a new RSL and main breaker with cash, that’s almost $200 of the $250 in vouchers right there.

But if we had to purchase a new RSL and main breaker with cash, that’s almost $200 of the $250 in vouchers right there.

While we’re on this heavenly road of awesome new changes from HQ, maybe they would consider giving us a second legal part # for the RSL. AndyMark’s unofficial RSL would certainly be a step in the right direction at $55 each.

Just for some added context, here are some of the items you may end up replacing with those vouchers:

As you can see, if you’re aiming to replace all the vital components with new ones, you’re going to run over the two $125 vouchers rather easily (although the batteries being sold in 2-packs provides more value here). So it’s not quite as cut-and-dry of a decision as I had first thought it to be.

Don’t worry, it’s a different 3M grip tape than the one you all used

I too am very concerned about this. That brain is the most important thing in the kit for us.

maybe they would consider giving us a second legal part # for the RSL.

The fact that this hasn’t happened yet has me wondering if there’s an external factor like a contract or something regarding a second legal RSL. I would hope the field electronics aren’t contingent on what company makes the flashing light on all the robots, but I’ve seen weirder deals.

It may not be an explicit contract so much as just them trying to make sure they aren’t going to accidentally be biting the hand that feeds them.

From what I’ve been told Allen Bradley donates/discounts a ton of equipment and parts every year which is likely why they’re being used.

Additionally, this restriction is likely a choice for consistency across all robots. Everyone knows which blinking light is the RSL because it’s the same one for every robot.

And I personally would like to see it stay that way. (Maybe with a cheaper alternative). Ultimately as long as they continue to be available through FIRST choice I don’t have a huge issue with them staying the same.

And I personally would like to see it stay that way. (Maybe with a cheaper alternative)

Definitely not suggesting we make the rule “any orange blinking light” for the RSL. But adding one single additional part # for the light, and having said light be cost effective and very closely resemble the current RSL, I think would be completely practical.

I’m not seeing the “Black Tote Opt Out” option on the Dashboard under “Payment & Product”. Maybe I’m looking in the wrong spot.

It’s not available until October 6th