Posted on the FRC Blog, 12/10/21: https://www.firstinspires.org/robotics/frc/blog/2021-documentation-iteration 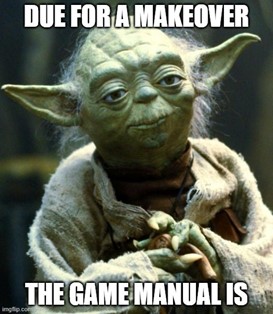 Did you know that there are two game design teams in FIRST Robotics Competition?

One team works on the even-year games; the other team is… odd.

Did you know that, even though each season typically brings a new game (COVID), there’s content that applies to even and odd years?

For that stuff, which we refer to as “evergreen,” the two teams collaborate, discuss, debate, calmly advocate, actively listen, and openly consider various directions to take those topics (only a few tables flipped!) such that when we agree to adopt an evergreen standard, it remains relatively consistent from year to year – even as game-specific content is wildly and excitingly reinvented for each new game.

One of the evergreen efforts the teams tackled over the last year was to revise how information was presented in the game manual and what norms we wanted to revisit and revise. The motivations/value statements used in this effort included the following, in no particular order:

The four major changes that came from this effort are…

We cannot yell this loudly enough… this is not permission for all you seasoned FIRSTers to skip over these rules! Please, please read through the complete rule set at least once each season. We are begging you.

To see how we formally describe all that, here are excerpts from the 2022 Manual, Section 1.8 This Document & Its Conventions (spoiler alert, there will be game rules for robots):

The following digit(s) represents the subsection in which the rule can be found. The final digits indicate the rule’s position within that subsection.

Rules include colloquial language, also called headlines, in an effort to convey an abbreviated intent of the rule or ruleset. There are two versions of headline formatting. Evergreen rules, or rules which are expected to go relatively unchanged from season to season, are indicated with a leading asterisk and their rule number and headline are presented in bold green text. “Relatively unchanged” means that the overall intent and presence of the rule from season to season is constant, but game-specific terms may be updated as needed (e.g. changing Power Cells to in a rule about what COACHES may not contact during a MATCH). These rules also start their respective section, so their rule number is not expected to change from season to season.

The rule numbering format is also being applied to an updated version of the Event Rules document, to be released before Kickoff (soon!).

One more manual update we wanted to share ahead of Kickoff… for a long time, the use of the term “student” (for the purposes of drive team membership, who has to be present for robot inspection, and who can ask questions of a referee) specified someone who is “pre-college.” This language implied that all students in FIRST are destined for college, which we know isn’t and shouldn’t be true for everyone (college is great, but it’s not necessarily right or right now for everyone – there are so many great post-secondary school opportunities!). As a result, the formal definition of student is now “a person who has not completed high-school, secondary school, or the comparable level as of September 1 prior to Kickoff.” That doesn’t mean that someone who doesn’t meet this formal definition can’t be on a FIRST Robotics Competition team, or even identified as a student on the team’s roster – it just means for rules where the formal definition of student is invoked, anyone not meeting that criterion isn’t eligible for that role.

Good luck this season, and be sure to Read the FIRST Manual!

Discourse does allow custom emoji if the mods wanted to bring back some of the Old CD smileys. Not sure if it supports GIFs, though.

Edit: By the way, is this the first time FIRST has confirmed the even and odd year GDCs?

So just to make sure I’m not missing something, they’re reformatting the manual to make clear which rules are “evergreen” so new students can study up on those before Kickoff. But they’re not actually releasing these evergreen rules ahead of Kickoff this year, so the change will really only help starting next year?

By the way, is this the first time FIRST has confirmed the even and odd year GDCs?

Probably the first time in this public of a forum, but it’s been known for a while now.

Not that there’s anything wrong with that.

Why, yes, I am an electrical engineer. Why do you ask?

Presumably there won’t ever be more than 9 subsections in a single section. But I guess we’ll see once the manual comes out on kickoff.

They’ll probably evolve from decimal to hex.
and when there’s more than F subsections. we’re really in trouble.

“This one goes to eleven…”

Could get to ten sections by numbering the first one zero. Programmers love that trick.

I would actually assume that the tenth section would add a digit, so it would go from R9nn to R10nn, or perhaps they would renumber the single-digit sections to add a leading zero like R09nn.

I actually like this new system better, because it allows for more insertion points. Having rule numbers like G15-A always seemed rather awkward to me, because they were clearly trying to shove a new rule into the end of a section but didn’t have number space for it.

Honestly, it might just work better for them to stick a “.” between the section and the rule. First one to suggest in the blog comments gets the credit.

Personally, I’m with @Zook on alternating digits and letters. Unfortunately, looking at the 2020 rules, there were 10 subsections to the robot rules, and subsection 7 (power distribution) had 25 rules [R32…R56], so this method is already near the breaking point in English, and broken for translation into several other languages.

Curiously, subsection 8 of the 2020 ROBOT rules was the “Control, Command, & Signals System” subsection, and the example in the blog indicated that this was subsection 7, so maybe they are going to number the Overview subsection 0 as @Richard_Wallace suggested.

Honestly I have always felt that there should be 3 manuals in FRC. This may sound counter productive to making stuff easier but:

Admin: Any rules relating to anything that has nothing to do with the new game, we used to have this and the last time I remember it was 2016. It told you about FIRST in general, how to fill out stuff on TIMS, how the awards worked, what tools were recommended etc.

Game: Fairly straight forward here this is for playing the game and any rules that a referee is expected to enforce

Robot: This is for robot related rules that an inspector is meant to enforce.