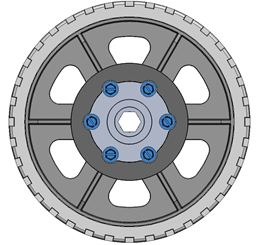 AndyMark has identified an issue within the AM14U5 Drive Base Kits provided in teams’ Kit of Parts this season. We have received reports from some teams who have observed that the six screws that hold the hex hub to the Center Wheel Assembly can work themselves loose. These screws can protrude and damage the Inside Plate of the AM14U5 Chassis.

Today, AndyMark is releasing a Quality Issue Resolution and Solutions paper that details the problem and provides recommended solutions for teams.

We apologize for any inconvenience this may cause teams. Thank you all for your continued patience and understanding for the issues that we have experienced with the AM14U5 chassis this year. We will work to improve for the future as we all navigate a post-pandemic world.

Thanks @Nick_Lawrence @Andy_Baker for getting this out as quickly as possible and via a platform that hopefully all teams using the kit will actually read and get in their inboxes. I still ask admins to sticky this as I requested the other thread be pinned or stickied.

Hey @Al_Skierkiewicz - is it safe to assume this is being sent out to LRI/RI as a thing to make sure teams know?

Yes, it was posted to all LRI’s.

Yes and it also was posted by First today as well. I had a robot over the weekend with this problem

Why are the new screws preferred over the old screws in corner and non hub situations? Based on my experience disassembling our wheels last night, they do an overall worse job than the 10-24 screws, even without the hub.

Any reason why AndyMark/First didn’t try to contact/let every team that has opt for the KoP Chassis know and instead put this on a Guest Blog which does not generate an email to the mentors on record?

We just discovered we have this problem yesterday as we are fine tuning some improvements to our autonomous mode.

Not helpful being 3 days before our 2nd event.

Also the title of this should be changed to ‘Any team that opt for the 2022 KoP Chassis need to pay attention’.

Not sure what good sending out to LRI/RI will do since we don’t hear from them normally. Guest Blog does not generate into email to mentors. If I didn’t search on the AM14U5 today I would not have known that AndyMark has known about the problem for over 5 days now. I know our lead mentors in NE First didn’t know anything about this.

The KoP is getting to be worst and worst each year and registration is going up. So really, FIRST need to give us an option to completely opt out of getting the KoP junks and save us $1k if they really think all teams can afford the price hike, worst quality of KoP and raising price on materials.

As someone who is a big critic of the KOP and FIRST in general, I don’t think that this one issue with the kitbot is indicative of a lapse in quality of the kitbot itself.

The kitbot is a very high quality solution other than these screws for this year’s kit. If you have an issue, contact AM. It is very obvious they’ll correct it for 2023.

As for communication methods, I’m pretty sure the blog is a good method. @Nick_Lawrence were all teams who didn’t opt out of the kitbot get an email?

were all teams who didn’t opt out of the kitbot get an email?

I have not received an email from FIRST, and would not have heard about this had I not been active on CD/subscribed to FRC blog posts.

I can asure you that the communication is NOT acceptable given that the Lead Mentor of NH First didn’t even know about this until I pass along the info. So clearly, a better communication methodology need to be in place.

We certainly can ASK FIRST HQ how many and when do they know about this.

I’m upset about this because we just find out about this yesterday when we discovered the issues ourselves and then find out that this news were out there 5 days ago. Our next event is in 3 days. AM has indeed sent out a replacement parts but I’m not scheduled to get that 1 day before our load-in.

And really ain’t AndyMark’s ppl are all over this CD here? When’s the last time any of them spoke up about this issue???

For that specific case, they should probably be subscribed to the FRC blog.

I am subscribed to the Blog and I did not received any email at all.

Any reason why AndyMark/First didn’t try to contact/let every team that has opt for the KoP Chassis know and instead put this on a Guest Blog which does not generate an email to the mentors on record?

Sure, we can definitely do better here. We live in the tent, and expect the reach of the FRC blog to be far and wide.

To be clear, it’s hard for us to track issues if folks don’t tell us about them. We absolutely love and need feedback so we can get better!

The FRC Blog is a great source of information about FRC wide announcements and issues. This is where big news like the end of Bag Day, BOM changes, award winners, and season structure has been. I would expect all key volunteers and senior mentors to be subscribed to this source of information.

FIRST also posted on social media about this blog post too.

Not sure what good sending out to LRI/RI will do since we don’t hear from them normally. Guest Blog does not generate into email to mentors.

From our perspective, this is quite appropriate. These folks are among the first to greet you at your events, and are the correct people (who are in your pit) to provide information like this, if teams had not already been aware of issues or updates on robot information like this.

And really ain’t AndyMark’s ppl are all over this CD here? When’s the last time any of them spoke up about this issue???

Five days ago, at the same time we posted the white paper. The blog went out a couple hours later after being reviewed.

were all teams who didn’t opt out of the kitbot get an email?

As I said earlier, we apologize for the issues that we’ve had with the AM14U5 chassis this year. These screws were tested on a real (and competitive,) Infinite Recharge robot throughout the offseason in 2021. This particular robot’s hours-meter currently reads north of 100 hours of awake time. Through three events, and significant drive practice, we did not see these issues.

We will work to improve these things in the future. AndyMark staff that attended events this past weekend were armed with replacement parts for teams that encountered this issue mid event. I expect we will have more parts available at the FIRST Championship in Houston too.

We just encountered the problem on Sunday during driving practice: 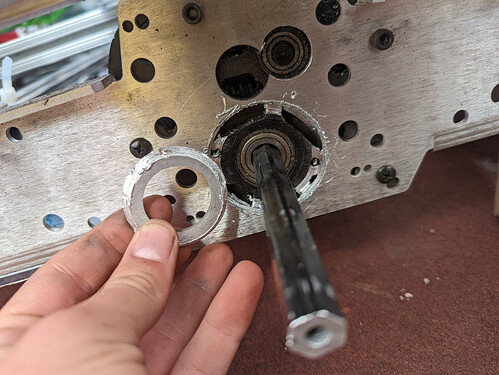 We didn’t see the blog post until Sunday night. The loose screws chewed through the chassis and into the gearbox behind before we discovered the issue. This robot has competed in one regional. This past weekend we were driving several hours on each Saturday and Sunday before the parts failed. The screws on the other side had also worked loose but had only begun to scratch the chassis when the first side failed.

Our team doesn’t have much FRC experience so our initial guess was that we had put the chassis together incorrectly in some manner.

We’ll be sending email to AndyMark service later tonight to hopefully get some replacement parts quickly.

This is what I figured. With the recent product quality issues with other vendors I had a feeling if you guys had this option it would have already been used.

Here are the pictures of both sides of our plates: 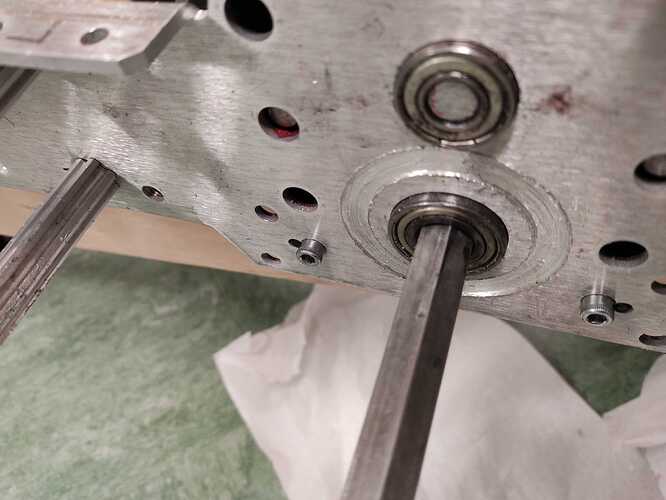 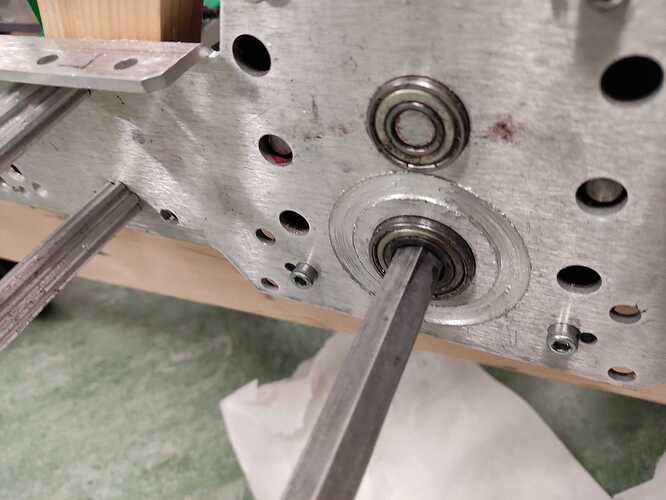 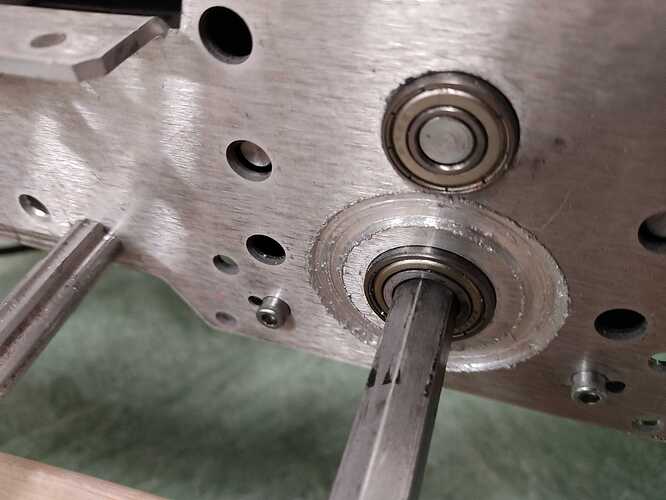 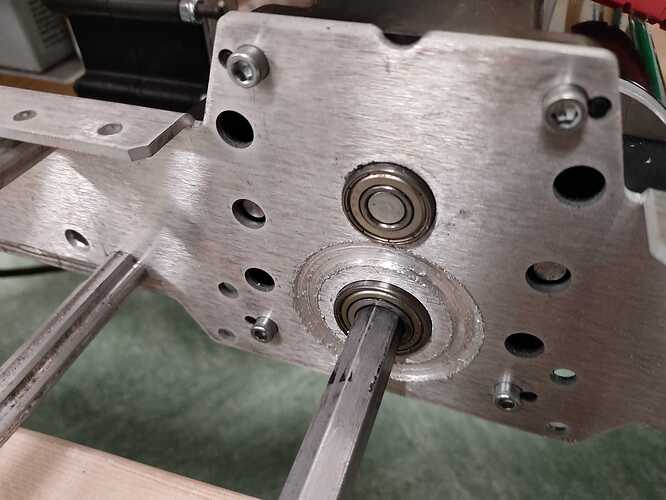 My biggest issues are that unlike all the other BIG News that came from FIRST, I did not received any email notifications at all in this issue 5 DAYS ago. Had I known this issue 5 days ago, perhaps we could have caught it early on and perhaps even able to prevent this from happening. Now, we are looking at possibly getting the replacement parts 1 day before our load in.

As to letting the LRI/RI knows - I’m not sure what would that accomplish other than having to deal with the issue not before hand but AT the competition. So is it that hard to asked to be notified when you guys discovered the issue??? A lot of teams like us relied on having a quality chassis in which we can build our robot on.

We have already run into 3 different problems with this year’s chassis - no long belts (we ended up having to wait over a week for it to come in), one of our mini-tough box has an issue where our dual CIM would wobble in it and now this (we just buy our own so we don’t have to wait long) and now this.

@tkchan
Sorry but just want to make sure you didn’t ignore this part of the post. Nobody is saying that the issues you experienced are okay, but they did put in a good faith effort to get the word out when teams started reporting issues.

I sent this out as well to the NE Discord, and asked mods to pin this thread to the front page on CD. As Nick said, FIRST also plastered this on their social media.

Those of us who have our email preferences set to receive the various FIRST emails also got it in our inbox.

I’m replying for once in defence of a vendor who did genuinely use their means to get the word out.