I am currently remaking the bumpers for 5740, the numbers are homemade iron on numbers made from a Cricut cutter. 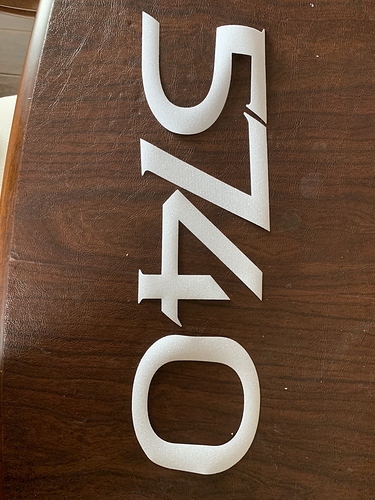 The numbers pass all the requirements specified in R29 (width and stroke) and they are white. My concern is the sparkle in the white. Would this still pass inspection? I haven’t put them on yet but I want to make sure this would be okay before put it onto the fabric.

The color can be whatever you want as long as the outline of the font follows the requirements.

What material is it? It’s hard to tell from the picture, but I think it generally looks OK. My only concern would be the “sparkles” coming off on other people’s robots, the field, etc. But I can’t really tell if that would be an issue without looking at it in person.

A fair warning at this point in the season - if you’re adding these to existing bumpers, disassemble the bumpers before ironing them on. I had a team this season that assembled their bumpers first, and then ironed on their numbers. The heat from the iron melted the pool noodles, removing about 1/2 their width. That was a problem, and something that you would then have to fix at champs on Wednesday before passing inspection!

I hope this is a better picture for you. 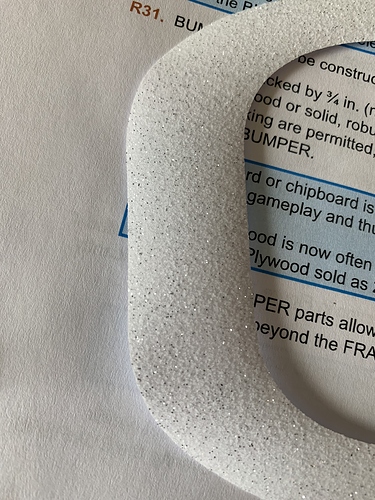 The material is “iron on transfer paper” according to the store’s website. I’ve been carrying the numbers around and the sparkles haven’t come off so I don’t think that would be an issue.

I’ve already stripped the old bumpers of the old fabric. I’ve heard stories like that of teams ironing numbers on once the fabric is assembled and it doesn’t sound fun. I have brand new stitched fabric that is ready to have the numbers ironed on. Once they’re on then I will put them on the frame.

That picture gives a much better look, makes me a little more concerned than the first picture. Let me see if I can get a better answer for you.

That picture gives a much better look, makes me a little more concerned than the first picture. Let me see if I can get a better answer for you.

Not to be rude, but if these were to come off, would it really be any different from gear dust and other particulates from robots on the field?

I don’t exactly see why even some sparkles coming off would really be an inspection issue. (Also most likely they are microplastic glitter and not metal)

That’s what I thought, but my team wanted to make sure it wouldn’t conflict with any bumper rules. Just playing it safe.

Do you have a link to the material?

This should be it.

My team uses plain white, no glitter, so you should be able to get it on the bumpers just fine. Still checking on the glitter portion for you, stand by.

Looks like you’re good to go - I got word back from Big Al that it’s fine.

Oh that’s great news! Thank you so much for your help!

There’s another team at Houston using this FYI. I can try and track them down and ask how it’s been working for them if you’d like.

Ok…ok…now I HAVE to ask. I almost bought glow in the dark white instead this year. Realized my mistake just before I paid and got the regular one instead. But a few kids were disappointed when I told them. I was afraid they might not be legal. (Even though you really can’t tell the difference by looking) The kids just thought it would be fun when they put it in the trailer and the numbers glowed. So does this mean they would be legal?

Is there anything in the rules saying they wouldn’t be legal if they glowed? Competition fields are well lit so they wouldn’t appear any different than standard white numbers.

To make them legal, after sticking them to cloth (heat/stitch), use a white marker and draw outline on the bumper cloth just around the individual numbers.

If it’s not out of your way that would be greatly appreciated!

There’s nothing in the robot rules prohibiting the use of glow-in-the-dark material. So long as in the state normally experienced at events (and inspection) they appear white and in compliance with the rules I can’t think of any reason to prohibit them.

Think about it another way; from the inspector’s perspective is there anything about the material that would fail to pass inspection if they didn’t glow in the dark? I can’t think of anything.

Or think about it yet another way… at any time during competition hours will anyone even know they’re glow in the dark?