Lighting definitely makes a huge difference in the pit. Our pit was super dark last year and was hard to use until someone ran out and bought some cheap lights that completely changed the feel of the place.

If you just went to an offseason they may not have provided the pit table. All official events have a pit table, usually something just a tad above a cheap folding table. We always used it because it was good enough and if it happened to get dinged up a bit more than it already was…¯\_(ツ)_/¯
Those aren’t the most portable, but does portability matter if it’s already there?

I’d pick up a folding table or two just to have as team property for whenever they’re needed.

Better lighting is good on its own, even without a canopy. Many events have dangerously bad pit area lighting.

For some of these things it depends on how much your team is willing to spend. I have seen some incredibly nice pits that cost upwards of $20,000 total to construct, and other nice pits for a fraction of the cost. So the way you go about your pit might change depending on the amount of funds you want to invest into it. However it’s always safe to start small and keep improving over years.

Something solid to prop up the robot while working on it in the pits.

The team one of my sons was on built a flat-deck cart out of wood. They intended to build a removable stand for short robots but never got around to it. At a competition, they ended up putting one or two of the totes from Kickoff on the deck and put the robot on top. The totes had been used to bring parts and materials to the competition and were taking up space in the pit. If the robot was tall, the totes would not be used so it could all fit through a doorway.

That sounds like a great idea.
Thanks for the rec.

Build it! 1293 has three main work surfaces: a custom-built pit cart with a workbench surface, the robot cart, and a 4x8 table custom-built for a Kevin Bacon movie being filmed outside their old shop some 15 years ago. (Honestly, I’d prefer it if it was 3x8 but they didn’t ask me.)

We use our robot cart for this. An alumnus welded ours up years ago and we built a wood topper for it, but there are many options out there. If you can design in a way to hold the robot propped up so the wheels are in the air, all the better. (Also, design in room for your driver station, whatever set of bumpers you aren’t using, a spare battery, and some bottled water.)

I don’t like to do a ton of decoration in the pits. Our pit cart and robot cart are wrapped in our logo pattern, and I’ll make some space for a hard-won blue banner. But as a doctrine, we don’t do that. Past teams I’ve been on have done backdrop stands to hang a banner up, which is cheap and lightweight.

Add me to the chorus of people talking about lighting in the pit. Even without an overhead canopy, I’ve been left disappointed on that at venues. You don’t have to spend a ton–even this cheap Harbor Freight lantern was helpful while working on the robot at Championship. Do pay for LED lighting, though–we have some older halogen work lights that are fine, but get super hot. I’d also put a mild premium on USB recharging–we never seem to have the right number of AA or AAA batteries on hand.

Also, plan for cooling both humans and robots. Water storage is important, and we’ve used fans to cool off hot motors after matches (or when we did have enough motors on the robot, to cool down humans after matches). We like these USB-rechargeable clip fans off Amazon; they’re a pretty generic thing to private label, so look around if that one is out of stock or gets past $36 or so.

Advanced game is to integrate a legit ceiling fan into your pit–it wasn’t uncommon in the days when the old Florida Regional had pits in tents. But that has a prerequisite of “a pit structure where you really built it well”, and you do lose the ability to cool stuff down while in queue.

We share an enclosed trailer with the band at one of our schools, since our scheduling doesn’t overlap. Everything we bring is on wheels, so we roll it from the shop into the trailer, and from the trailer into the venue. For Championship 2022, we rented a box truck with a powered liftgate.

Accept no substitutes–if you’re walking in totes, you will spend hours unpacking and still not know where stuff is.

As others have mentioned, all in-season events will supply a heavy-duty folding table similar to the one pictured below. A small (~3") vise can definitely be clamped to them in a sturdy manner (other options are given by Eric below). In my experience, they’re typically around 6’ - 8’. 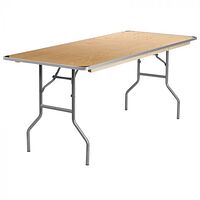 Our team uses a collapsible photography background stand like this (IDK if this is the best one or not, just an example) to hang our banner from. Compared to a tent, it’s cheaper, less bulky, & doesn’t get in the way as much.

Our (and a lot of other teams) use a U-Haul cargo van to get the pit supplies and robot to competition.

Some other misc. stuff:

One thing you could use for a pit structural element (to hang a banner off of) is a canopy tent. This is what we’ve used for a while now, and could be something that you already have available. Ours is custom (so we don’t actually have a banner, but I don’t see a reason why you couldn’t hang one on it. 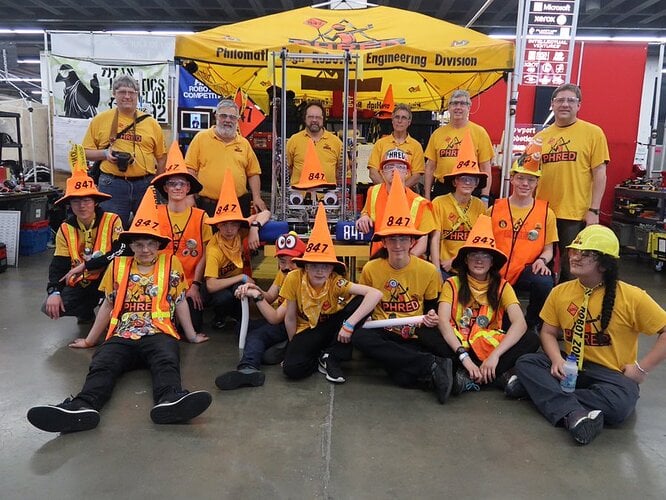 A small/medium-sized vise can definitely be mounted in a sturdy manner.

Do NOT drill holes in the provided table to do this, BTW. Use hefty clamps instead.

If you own a toolbox or portable table, drill holes and mount a medium vise to it, and bring that to events. Helps a bit, but make sure it’s got wheels if you can, vises are heavy.

Definitely this lol. I can’t imagine the horror of seeing a team intentionally drilling into the venue tables. We’ve personally never found the hassle of a larger vice to outweigh the difficulties of getting to and step up at competition, but I can see the utility in it.
I have edited my post accordingly.

Team 2869 has a very old pit structure which is a bunch of 1x1s and some connector pieces. We usually hang some 10x10 team logo banners on the outside and back sides of the pit so it’s easier to find using zip ties.
Here’a a photo from last year 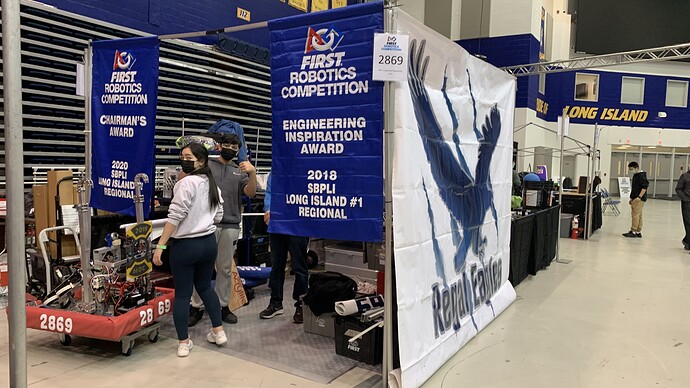 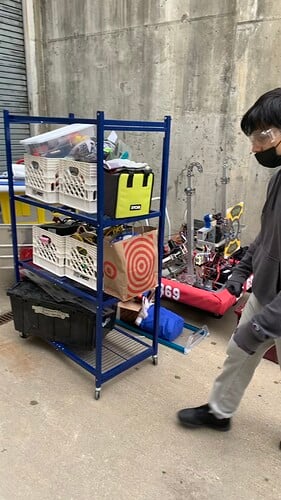 image2268×4032 1.36 MB
We have a red husky tool box and some totes that we use to store everything during the event. We also got a shelf to house stuff we aren’t using at the moment.

We use a robot cart which can be raised and lowered so we can work on the robot easier. The only problem is it’s slightly too wide so the robot is always uneven on the cart. 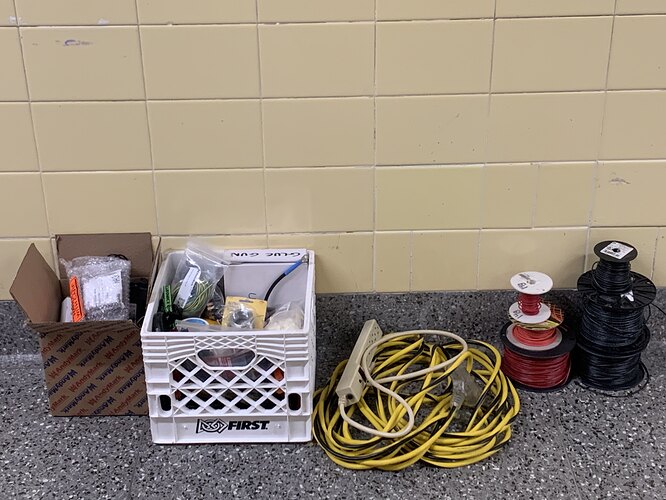 Get an extension cord/surge protector with enough outlets for your stuff. You don’t want to have to unplug batteries during the event and often they give you 1 or 2 outlets.

Start practical - Milwaukee packout system with drawers and the dollie are great for transporting tools. Find someone with a 10x10 tent (farmers market vendors) to use, get a local signmaker to donate material and use a Cricut to make a sign.

Utilize your high school/school district as much as possible, especially your transportation/athletic department. Box van was mentioned which is what we use. We also have mentors drive activity buses (15 passengers + driver). I know the athletic director well and we typically do not pay for gas. Essentially, our transportation for our two districts and DCMP is free.
Work with area teams, if any. Using transportation as an example, a local team (shout out to 1646) used to come pick up our pit with their box truck.
As for pit set up, we utilized some school equipment early on like the pit table, toolbox, old cart for the robot. Being the tech teacher who manages the lab the robotics team uses has it’s advantages. If thats not your situation, definitely become friends with that teacher(s). One of the other schools in our area has some cantankerous, territorial teachers who do not allow them to use any of their space/tools.

TLDR; Utilize everything your school has to offer. Build relationships with the right people early. Save money/stress.

I saw a lot of other teams use trusses, but I want to know if there are any alternatives.

I’ll plug the good folks over at Georgia Pipe and Drape. Not sponsored, just like what they do. We successfully took our pit assembly time down from 15 minutes with 6 people to 5 minutes with 2 people.

Can you share with OP how you handle each pit dimension being 10 feet plus or minus 2 feet? An assortment of 4-foot and 5-foot components that rigidly connect to each other?

I’m not @gerthworm, but as someone more intimately involved with pipe and drape than I’d like to admit, I’m guessing they buy the adjustable crossbars.

The uprights are most often a fixed height (though they also sell adjustable height) but crossbars are very often sold in variable widths. My guess is they purchased something like 8’-12’ crossbars or 6’-10’ crossbars. The poles just telescope and can be any variable length in that range. The drape bunches up – and in fact looks better bunched up than fully stretched out.

Upgrade your cart so you can work on the robot while it’s on the cart.

We just use an ordinary plastic cart with some 2x6’s in the top to keep the wheels elevated as both our transport cart and our pit work surface. They’re less than $300.

We’ve found that foam floor tiles are a phenomenal way to make the pit not only safer (fewer slips) but also softer on the feet.

I have volunteered at two events held in ice rinks. The teams with the foam tiles in their pits were much nicer to visit since my feet weren’t so cold.

For teams that use the foam floor tiling, do you also put it under your toolboxes and tables, or only keep it in places of your pit that have foot traffic?