We put these on a open flatbed truck via a lift gate so none of this was a thought for us. You can probably squeeze 2” out if you needed but would be careful going any more than that, the clear bins fill the top shelf pretty optimally. Omega case should be able to adjust our design as needed I’m sure they got it down by now…

We built our pit out of 80/20 framing. It wasn’t cheap, probably around 5-7k in 2020. This doesnt include bins, tools, chargers etc. but it is a phenomenal setup, includes a banner stand integral to the structure, and 80/20 gives FRC Teams a discount. If you are interested let me know, I will post a picture.

I like the idea of an elevating top shelf like 973’s super pit. That way no one has to do any manual lifting. I’ve been trying to think about how to have that and still allow the top shelf to be removable (so that it fits under a 41" tall Prevost H3 underfloor bus bay if needed).

Here’s a potential solution: Does anyone see any issue with using two of these motorcycle jacks to lift up the top shelf in a 973 style superpit?
https://www.princessauto.com/en/1100-lb-motorcycle-atv-lift/product/PA0008667818 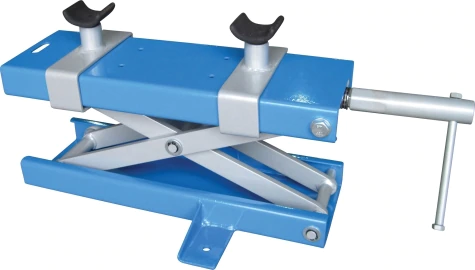 Man, now I really want a massive gryphon head for my team to work in

Some teams added gas springs into the flip-top shelving portion of their road cases to assist lifting.

That’s interesting. Do they use the elevating table top to raise the upper shelf? It would take some adapting (move the work surface to the fixed top of the base unit, reduce the shelf depth), but it could work I think. 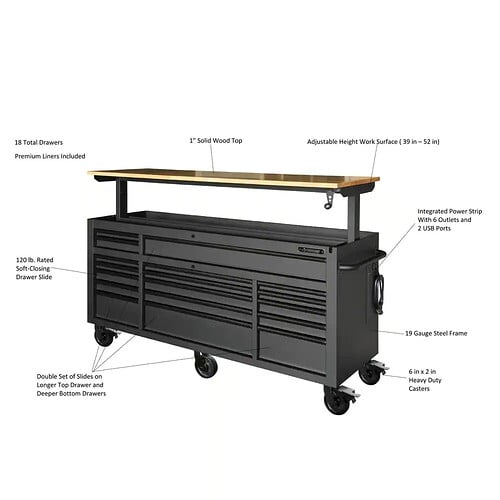 Crates with shelves on the inside works pretty nice sometimes, they have room to transport your stuff and we’re probably pretty convenient at comps. Lately us and robonauts/other RAP teams have been using a lot of the Milwakee pack out stuff and it’s been pretty convenient so far, really great for transportation. The boxes are good to label by subsystems, you can get them to look pretty nice by throwing a coat or 2 of spray paint on them in your team colors and just labeling them for various tools and COTS parts. Olympia also has some pretty nice hardware boxes that transport pretty well. The best FRC pit I’ve seen is team 4414 hightide’s pit which they work out of during season to easily figure out what they need in their pit and other helpful things Team 4414 | HighTide | Pit Writeup. Team 973 made a cool Super pit in 2014 which is just a bunch of welded tubing with shelves that easily packs up for transport but is bulky and may be unceinant for out of state events Super Pit - Team 973 | The Greybots. (Super old pic from like 2008 but you can see the crates in the background) 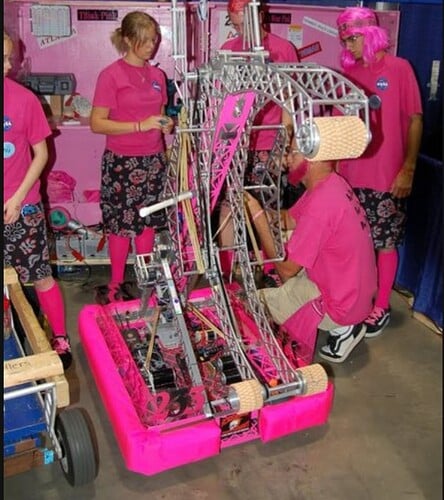 I highly recommend aiming to build a super pit of some kind eventually. Being able to roll in 2-3 items and have a well organized pit set up in 5 min is huge. Especially the well organized part. Designing in lights and banners will handle all your branding and light needs. The road case pits seem to be all the rage on CD lately (and they are making me jealous), but we use a welded aluminum pit, and I’m sure a super pit could be made out of just about anything given time for design and fabrication. If you have access to a CNC router, you could design a plywood pit with tab and slot construction (try to consult an engineer from the commercial furniture industry on design if you don’t have much tab and slot design experience).

Before the super pit, you can get a tool chest/ workbench that can be integrated into a later super pit. You can also start building out small parts bins, safety kits etc that will be able to go into a super pit later but can go into totes or on wire racks in the short run. I recommend against wire racks in the long run, we used to use them but they will only survive a few seasons in FRC.

I have watched many teams spend a bunch of time setting up elaborate truss structures and decorative pit entrances. As far as I’m concerned they are a (often expensive) way to waste time at events, and serve no practical purpose. If you want some branding but don’t have a super pit or rack to attach it to you can easily buy something like this https://www.vistaprint.com/signs-posters/retractable-banners We still use ours so we have a banner that is independent of the pit.

With roadcases that’s a different lifting to raise the upper shelf. It’s more of a pivot not a straight lift.

This style would be neat, but the reviews on the capacity of the lift seem mixed. You might need to remove the heavy items from the shelf when lifting and scale down the size of the shelf. Something light and simple to fit under would be a great for many teams.

A lot of good pit setups. When I took over the team in 2017 we didn’t have much. After going to comp we built a RoboStore Cart. Its a great starting point for teams being easy to build and a great way to keep things together for easy transport. We have better pit setup now but we still take this to some off season events. Also good for storage at the shop.

This is kind of what I was thinking with the motorcycle jacks. Thoughts? 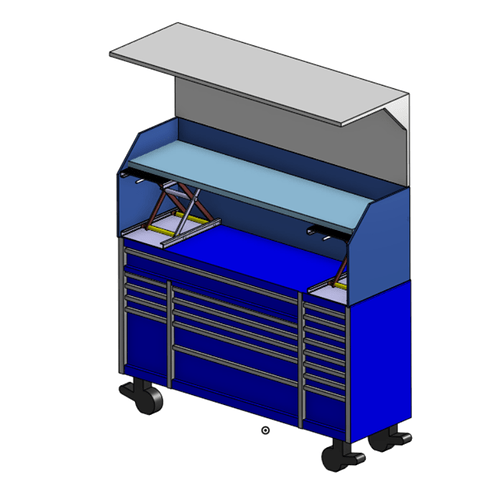 …should do it eventually. Being able to roll in 2-3 items and have a well organized pit set up in 5 min is huge

We do this for about $250 using two sets of 48x14x48 rolling NSF wire shelving - One has batteries and chargers, the other has parts box storage. Tool box is separate.

We put the batteries in separate milkcrates, then team-lift the shelves into the back of a school van while otherwise fully stocked. (Use shipping wrap to hold all the boxes on the shelves)

(Related to below quote)
I find the Milwaukee pack out stuff to be too jobsite oriented to be worth the price. By the time I have equivalent storage of two rolling wire shelves, I’ve spent four times as much money, and am burning two or three times as much space in plastic bulk. It shines when you’re moving every couple hours.

Does that gray and greyish-blue part come separately? Otherwise I’m not understanding how the jacks help you keep it under 41" tall.

Yeah that’s the idea. In the case where we had to move this under a bus, you can remove the entire darker blue upper cabinet (with the jacks and shelf inside) and pack it under the bus separately.

Yeah, we used the same wire shelving for a few years. They’re really great as a relatively cheap alternative to a full super pit. Where we ran into problems, was that they started falling apart on us after as little as 1 or 2 seasons. We were carrying a lot of extra weight (I think our fasteners weighed over 1000lb alone) and traveling to 7+ competitions per year in a trailer, so I’m sure teams who are more judicious in the packing and have fewer events can get them to last much longer.

For anyone out there thinking about wire racks for their pits, go for it, even if you end up building a super later, the racks can be useful at your build space. (even if you trashed the casters)

We also use rolling wire racks that have 2 shelves, we put a thick piece of wood for a table on top. They then extend up so we have a decent sized workspace, and we have another shelf above ~6-7 feet up that we use to store extra subsystems. We use totes to store everything, as we can fit 8 totes per rack. We also have a toolbox that has literally any tool you could ever need. We lay down foam tiles on the ground, and have a soccer bench for the drive team and mentors who stay in the pits.

tldr, if you are looking for something that’s not a superpit, rolling wire racks, your toolbox that you use during build, and a soccer chair are all I would say are necessities (believe me, your drive team will thank you for that), and foam tiles are nice if you have a little extra to spend.

There will be a couple hundred pounds worth of organizer bins on that shelf. The idea with the motorcycle jacks is that the shelf can be raised from transport position to working position without having to unload it first.

The wall above the shelf fold down to form a closed lid during transport. As shown below. It might also support some overhead lighting. 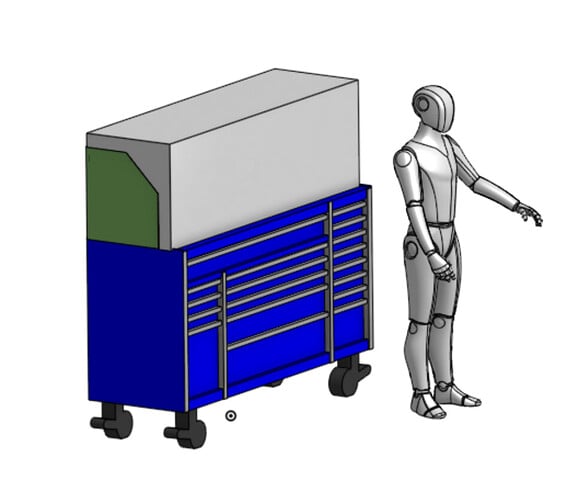 The model for the scissor jacks shown above is wrong. The ones I linked are only about 6" wide x 18" deep.

I have discovered perhaps the most credible pit setup in FRC history. I give you, the McMaster-Carr In-Plant Office Building: 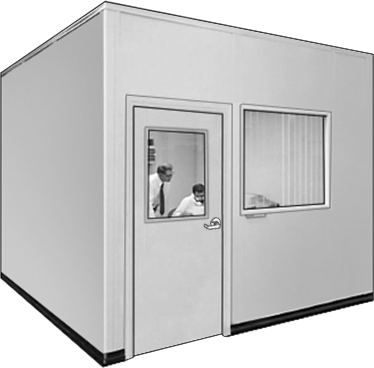