I’m not sure if 190 was documented in here, but this book about many of the top robots from the 2007 season has lots of information ramp bots: 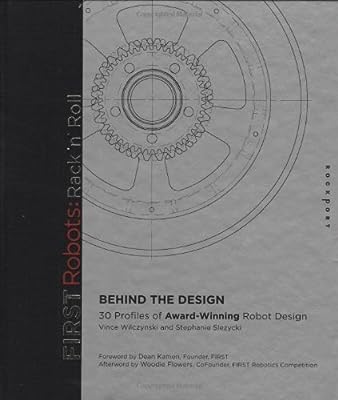 I’m not sure if 190 was documented in here, but this book about many of the top robots from the 2007 season has lots of information ramp bots:

Goatdactyl was profiled! We had the centerfold.

You’ve probably already seen this, but from their “History” page

Due to the large amount of points available for robots being raised above the carpet (15 points for 4 inches and 30 points for 12 inches), the team set out to create the robot with the best lifting mechanism in FIRST, while not sacrificing the ability to score tubes. The six-wheel drive-train supported the two massive wings, one on each side of the robot. At the end of the match, the wings would slowly fall to the floor, extending out to an eight-foot wingspan. Once an alliance robot had driven up the wing, a specialized anti-roll-back device would ensure the robot was at least four inches above the ground. Finally, upon reaching the top of the ramp, the partner robots would be lifted a foot into the air by three pneumatic pistons stored on the underside of the wing. In addition to all of this, the Goatdactyl was also quipped with a super light elevator and gripper, designed to grasp tubes from the ground and deliver them to any scoring peg on the rack.

In addition, this may be the only photo of it publicly available. The only people to ask might be some of the older mentors.

Here’s some photos I had on Facebook from the 2007 build and competition season. I pulled the ones featuring the ramps and put them on Google Photos. 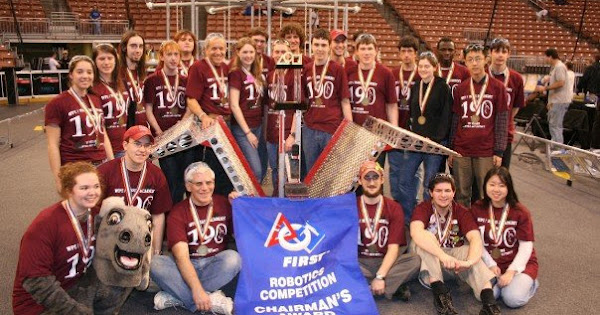 To answer some of the original questions:

The ramps were 2-piece, forming a single, 11* ramp when deployed and then lifting the central platform to a flat 12.5" height when activated. The lift was done by 3 pneumatic cylinders per side (1.5" bore, 6" long). The cylinders were spring loaded towards the “down” position with rubber bands, but were held inside the frame perimeter by cable when the ramps were stowed up. The outer part of the ramp was also spring-loaded slightly outwards with surgical tubing so that when we deployed, they would bias themselves outwards and then slide away from the robot when they contacted the carpet. Sometimes we’d have to do a little shimmy to get them to kick over enough that they didn’t fold under the main platform (if you find any videos of early BAE Regional, that definitely happened a few times).

Ramps were actuated down with cable capstans, although a sprocket could work just fine. The cable capstans were used because of some geometry constraints in this instance. We held up the ramps with pins in the main part that kept them secured to the elevator tower until it was time to deploy, then pulled the pin to allow the ramps to be deployed. We had enough motor power to lift the ramps back up (slowly), but they weren’t able to keep them stowed well on their own.

Major construction is 0.060 aluminum sheet metal box and rib, riveted. I think we had 3 ribs in each ramp. The upper surface was dimpled to provide additional stiffness required to support robots.

The little plastic thing on the outer section of the ramp was an anti-backdrive feature that would keep most other robots on the ramp. Because of the scoring rules that year, you got 15 points for having a robot above 4" and 30 points to get them above 12". The outer section of the ramp and anti-backdrive device would keep most robots above 4" once they got past it, even if we never got them in position to actuate the main portion up to horizontal. It works basically the same as a spike strip for a parking garage or tollbooth.

I honestly don’t remember weight, I think it was ballpark 30lbs per ramp total, including pneumatics and motors but I could be way off.

Edit: Steve Kaneb told me they’re about 22-25lbs each. So I was close on my guess.

668 had a parent who made carbon fiber radomes, so in 2007 we had carbon fiber ramps. A lesson learned in competition was that ramps that extended forward (parallel to the long dimension of the field) were a lot easier to climb than ramps that extended to the side, ‘bots then had to turn sideways to drive onto. Teams also learned that if a ramp was accidentally deployed (think collision) before the endgame, the ‘bot violated the size restriction - it drew a penalty and was all but impossible to drive.

If the wings fell at the pace gravity dictated, the end sections didn’t have enough time to rotate out. The motors on the pivots started pulling the wings down, then drove against gravity to allow for a smooth deploy.

The servo holding the retaining pins eventually started malfunctioning and releasing them early (on Einstein!), so the ability to pull the wings back up proved invaluable. 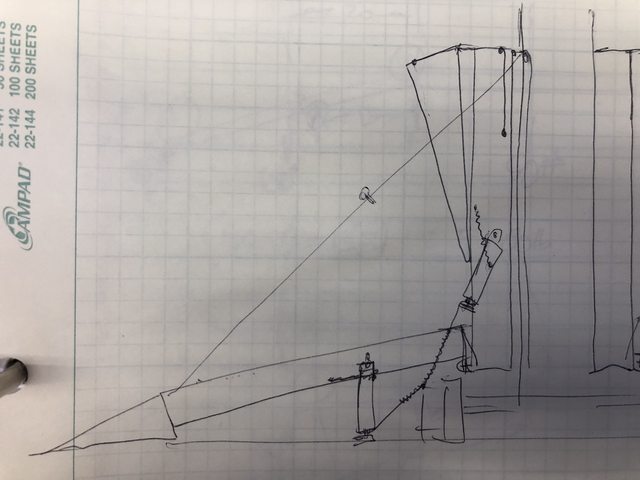 Close to final design image focusing on strings for ramp sections and pistons. It looks like this is before we were using the motors on capstans, hence the big diagonal string to the corner of the platform. 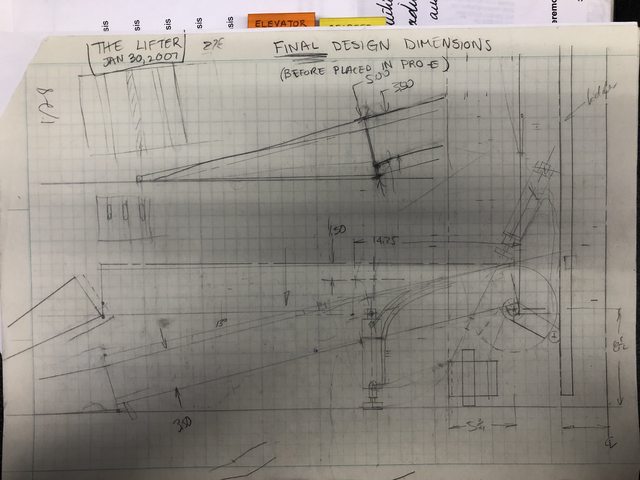 The most complete detailed drawing before CAD got finalized to go to the laser cutter.
The large platform was 36" long, the ramp was 20.5" long, and the hinge between them is 5" below the top of the structure. 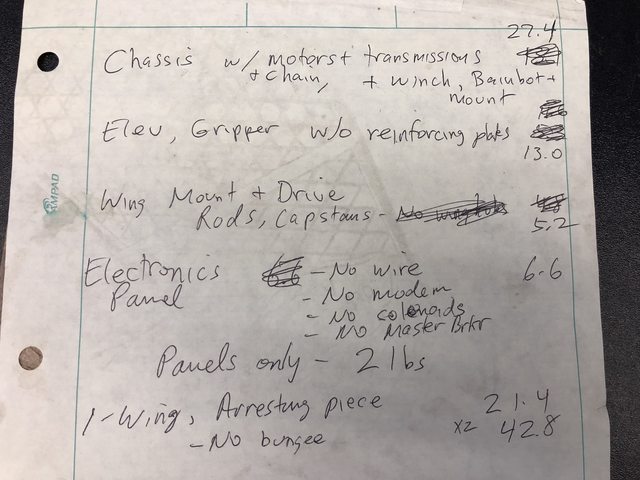 Was the .060 dimpled aluminum platform purchased and cut to size or was that custom machined? It’s similar to types of aluminum I have seen before used for flooring, but I haven’t found anything as thin as yours is.

The holes were lasercut, and the dimples were done in-house with a die, if I remember correctly!