The SuperNURDs are looking forward to this upcoming FRC 2022 season!

We will be posting weekly recap videos every week during build season to showcase our progress and designs!

Look forward to videos posted on the following dates: 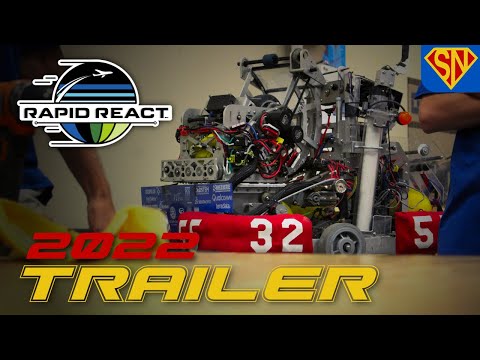 Good luck to all teams this 2022 Season!

The SuperNURDs are fortunate enough to be able to meet in person, so we had our entire team watch the kickoff livestream together. After the livestream, we split up in to four groups, each assigned with one or two sections of the manual. Each group read and and created abridged version of the manual, then presented it to the entire team. This is an effective way to make sure the entire team has a comprehensive understanding of the manual, and can generate many useful questions.

Next (after a break for lunch), we started discussing strategy. Our mindset is to come up with a game strategy, then design a robot to fit that strategy, and not the other way around. We started by thinking about auto, and what we wanted to accomplish during the auto period. Since auto points are doubled, plus the quintet giving an easier ranking point, we spent a lot time thinking possible auto paths and strategies. We have a simple five ball auto path conceptualized, but we haven’t done any actual programming or testing yet so that may not end up being viable (or physically possible).

Once we moved on to teleop, a lot of time was spent on trying to determine if climbing was worth it. We came up with some arbitrary point values for how much we expected to score in 30 seconds, and used those values to give an idea for how fast we would have to climb on each rung for the time spent climbing to be better than scoring cargo. 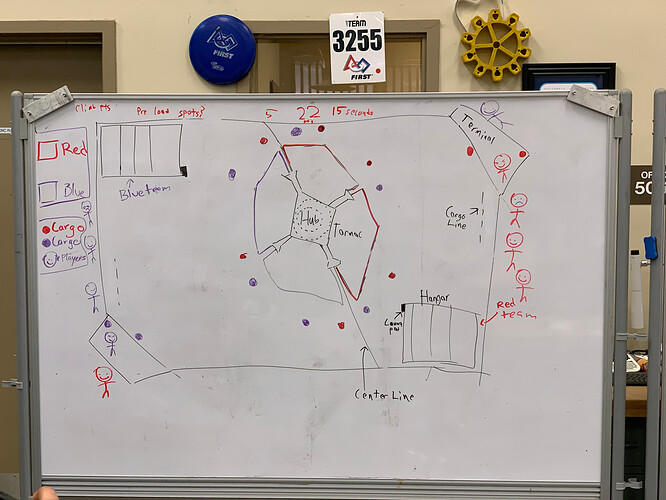 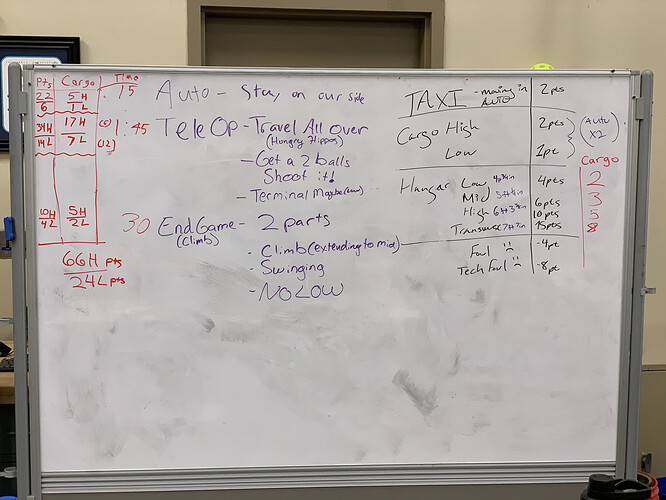 The SuperNURDs had a great first week of build season and can’t wait to see what the rest of the season brings! 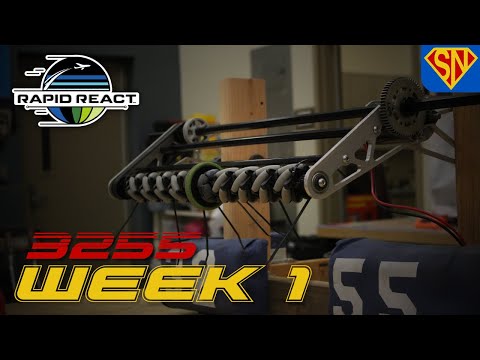 Further details about our progress will be posted soon! Stay tuned.

3255 has had a very productive week 1, and has made us very optimistic about the rest of the season. I mentioned in the Kickoff Day Recap that we want to come up with a strategy, then design a robot around that strategy. The way we accomplished that is by creating a Musts/Wants list. We made a list of a bunch of things that we could design the robot to do (eg high hub scoring, climbing, fender shot, launch pad shot, 3 ball auto, floor pickup, etc) and categorized each task as either a must or a want. Additionally, each of the wants have a weight of 1 to 3. The items on this list are very high level, and are simply the basic tasks the robot will have to perform. We spent a large part of our week 1 meetings working on this list, because these are the requirements that will dictate the robot we end up designing.

The item that took the longest to decide on by far, was the turret (dedicated horizontal aiming). Initially, we had the turret down as a level 3 want, but the problem with that is that the decision to include a turret is an extremely impactful one, so having it as anything other that a must or a level 0 want doesn’t make much sense. (We have shooting from the terminal as a level 0 want: it’s something we would obviously like to do, but it’s not something we’re going to design the robot around). The turret decision was a difficult one, because including it would almost certainly make our robot better. It would allow us to have lower cycle times, shoot under defense more effectively, and potentially a higher scoring auto. The main argument against the turret is that it would take time. Time that could be used for drive practice. Would a robot with a turret being driven by students with a day of drive practice be higher scoring than a robot without a turret being driven by students with two days of drive practice? This question is impossible to answer, and everyone had a differing opinion. Ultimately, after all meaningful discussion dissolved to this question, we decided to just take a blind vote. We all put our heads down, raised our hands if we wanted a turret, had a mentor count the votes, and now the turret is a must on our list. We really won’t know if this was the right decision until we’re at comp, or at least very late in build season, so make sure to check back in a few weeks to find out.

Once we had finalized the Musts/Wants list, we could finally move on to thinking about the physical problems we would have to solve. We wrote down all the physical subsystems that robot would have, and all the physical requirements of that subsystem. Once everyone had a solid understanding on what each subsystem had to do, we split in to groups for each subsystem. Each group was assigned to come up with a few possible designs for that subsystem, and find examples of their ideas in past robots. We then came back together, and each group presented their findings, and their ideas for their subsystems. Then we formed two groups, each were to take the established subsystem designs, and pick one of each, to put on it on a complete robot. (This is still just all on whiteboards). The goal of this is to make sure that we won’t have any major packaging issues, and that the complete robot would still be functional. It also lets us weigh the pros and cons of certain styles of subsystems more accurately (eg over or through the bumper intake). Our two groups made essentially the same robot, so we all had essentially the same idea of what we wanted. This doesn’t mean the subsystems that we didn’t choose were just going to be scraped, we still have yet to prototype anything so we will still need to keep all the designs in mind in case one doesn’t pan out.

Now that we had a idea for our complete robot, we could finally get to prototyping. We just had two groups, one for shooter and one for the intake/transfer, but in just a few minutes we had a very successful intake prototype (the one in the Week 1 Recap video). This was actually just an old, unsuccessful Infinite Recharge intake laying around from the 2021 offseason, so we got fairly lucky that it worked as well as it did. That wrapped up our first week in build season! Check back here again in a week to see how the shooter prototyping went (spoiler: good).

The SuperNURDs had a productive second week of build season! We have completed many prototypes regarding our intake, transfer, and shooter. 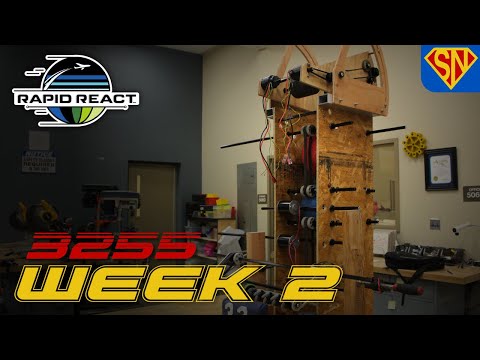 *Note the shooter in the video was using 1.5" of compression with a 4" solid rubber wheel.

3255’s main focus during week 2 has been prototyping. The first thing we did was test our first shooter prototype, and it worked wonderfully. The intro shot of the week 2 recap video was shooting from the terminal, and easily making the upper hub shots. It was more of a proof of concept, but gave us the data that we needed to begin working on the next shooter prototype. One problem that the first prototype had was how we fed the cargo into it (manually), and we wanted our next prototype to actually be fed from a transfer mechanism. Conveniently enough, we had been designing and prototyping a transfer just for that purpose. There was a slight hiccup in the transfer prototype, and due to a miscommunication we were trying to use 3" of compression, but that got sorted out quickly enough, and before we knew it we had a highly functional first transfer prototype.

Our new shooter prototype was a much smaller hooded design, and it was put on rails, so we could adjust the angle of the shot. We could mount it on top of the transfer prototype so the variation of human feeding was no longer present, plus it gave a more accurate height for shooter to be mounted. This shooter also featured powered rollers on the hood. Unfortunately, due to some calculation errors, this shooter had too much of a gear reduction (2.25:1) and could not make the same terminal shot that our last shooter could. This shooter could make fender shots extremely quickly and reliably though. With a minor modification, we will be able to test some different gear ratios to find out what works.

On the software side of things, we have been working on the most important element of any robot: RGB lighting. We had an idea to match the color of an LED strip to the color of a cargo, and with the help of a color sensor that was pretty easy to do, and it yielded some pretty cool results (also in the week 2 recap). 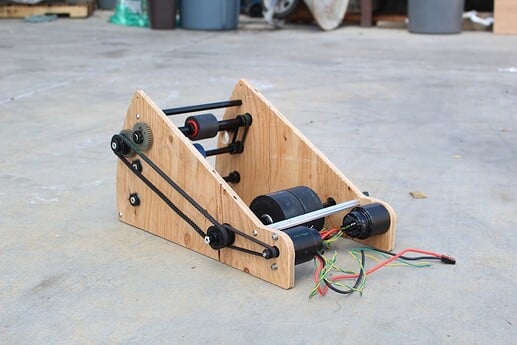 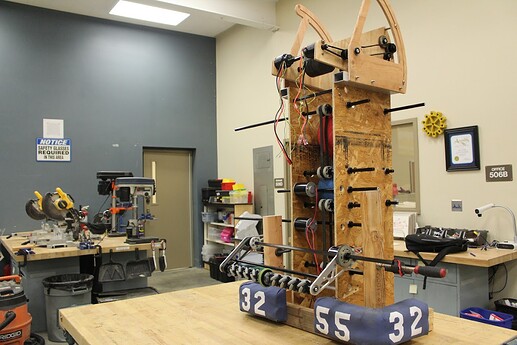 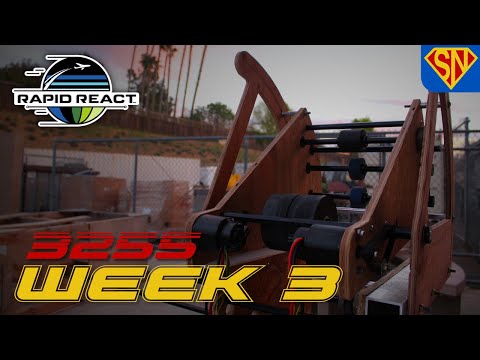 Week 3 has been a slower one for us. We have made some good progress on our shooter though, and you can see in the week 3 recap video that we’re making shots from the terminal fairly consistently. We decreased the gear ratio on our shooter to 1.5:1 and have been able to make every shot from the terminal to about the edge of the tarmac with a fixed hood angle of 36 degrees. Our only adjustment is changing the flywheel rpm. This has led us to the decision that we’re going to have a two stage pneumatically actuated hood, with a more vertical angle that will let us make the closer tarmac and fender shots. We can just vary the rpm of the flywheel to adjust the range of the shooter. This has the benefit of being a lot faster than using a motor, as well being more simple a mechanism. We’re also close to reaching the maximum motor count (PDP) so removing a motor would help that as well.

Check out our Week 4 recap video! 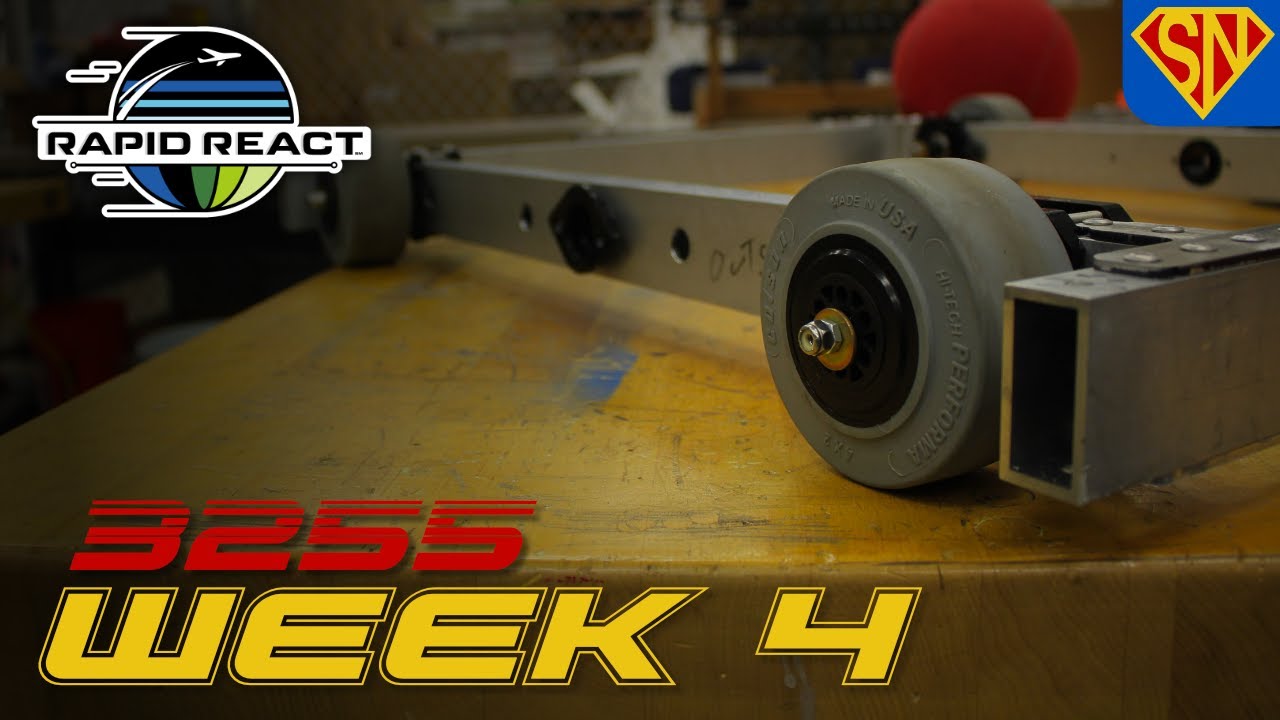 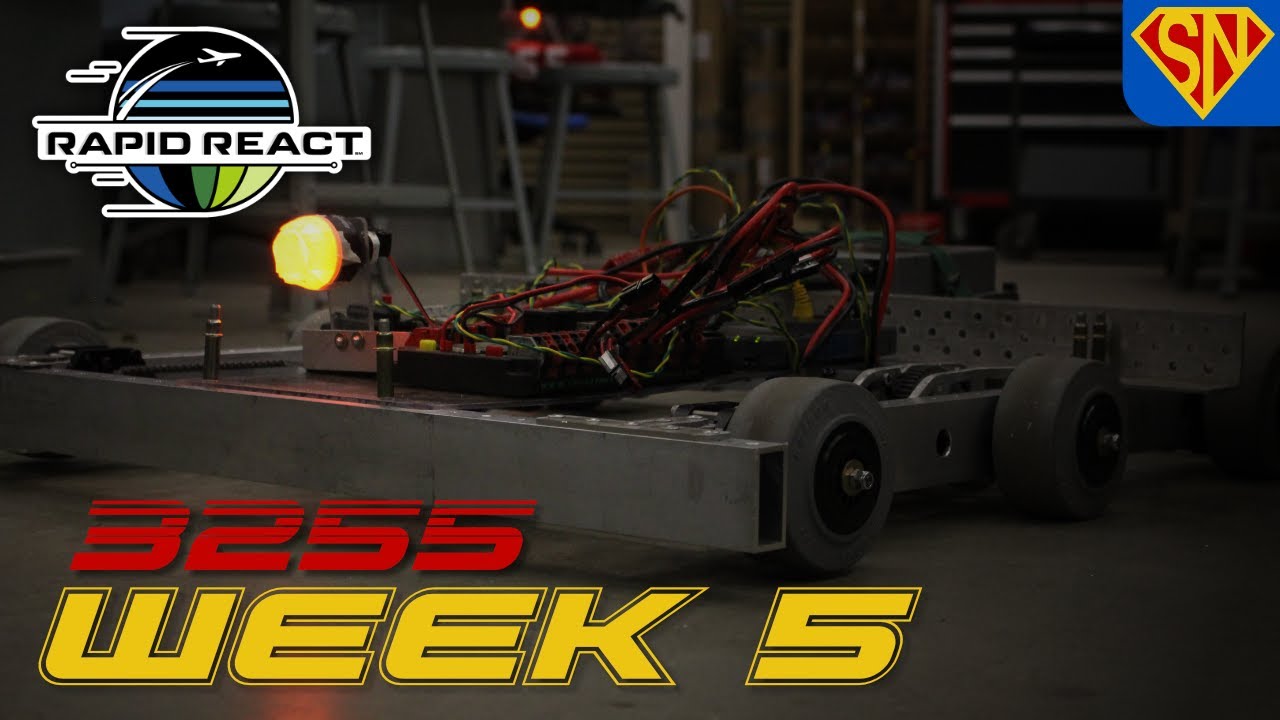 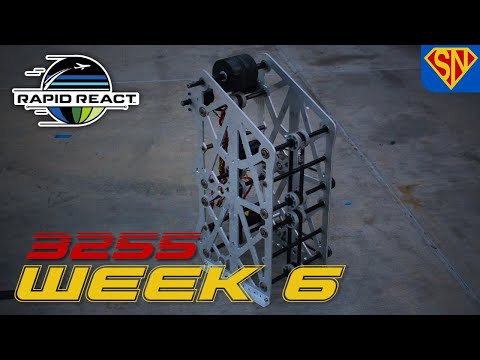 Week six has been a busy week for us. We are very glad that that bag is gone, because as you can see in our recap video we do not have a complete robot. We have the shooter and upper transfer mechanism complete, that’s what you can see us testing in the video. It shoots very well, and with a bit of tuning it should shoot even better. We did have some issues with the transfer mechanism losing traction on the cargo, but this shouldn’t be too difficult to fix, whether mechanically or in software. The shooter in this video is using a 4 inch solid rubber wheel powered by 2 Falcon 500s with a gear reduction of 1.5:1. The back rollers on the shooter (to my, programmer, knowledge) are geared to where the surface speed of the smaller wheels match the surface speed of the main flywheel. This is the same design as our prototype.

The software powering the shooter should be fairly straight forward. We control the flywheel velocity with PID, and when the error of the flywheel velocity and the goal velocity is low enough, the transfer will send a cargo to the shooter. There are a few different ways to get the distance to the hub though. The first and arguably simplest is by getting the area of the target using a limelight (or equivalent). This directly is tied to the distance. Another method would be by using the Y-Offset to the target. This is less easy to use, and depending on the difference in height between the camera and the target, may not be accurate enough. A third method, and this is a lot more complicated, is by keeping track of the robot’s position on the field at all times. This is made far more accessible by the WPI library. A combination of these three methods is probably the best bet, especially when the having usable vision isn’t a guarantee (I’m looking at you Del Mar Fairgrounds). 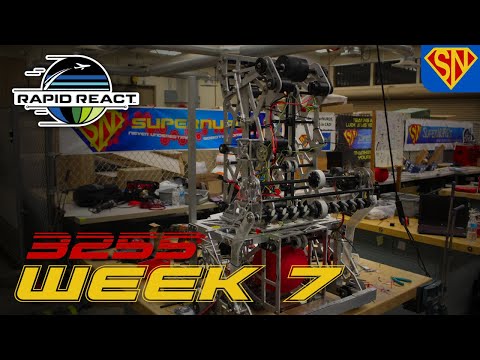