I am currently at Montreal’s regional and many teams have had issues operating their robot during sandstorm which led me to make this post.

Documentation on this may be a bit misleading as when you create a default project it shows joystick .vis saying you can get inputs from there and some online references mention how joystick inputs are not cached during autonomous this season.

If the inputs do not work while in autonomous, what you need to be doing is to simply put your teleop vi in a loop which means you will be using your teleop code in autonomous. It simplifies your task and it fixed most team’s problems. 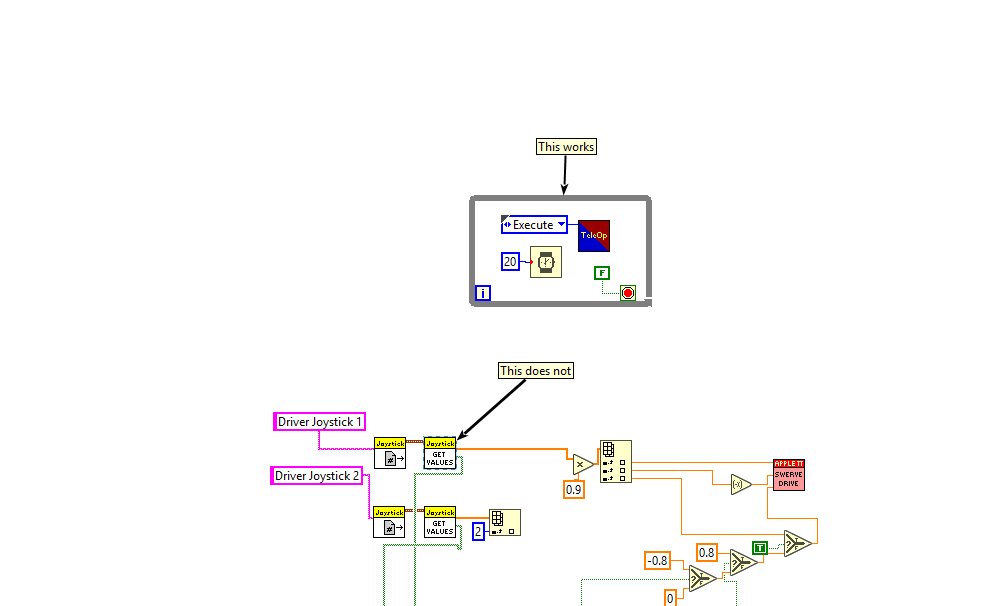 An easier way is to have all your code in the Periodic Tasks VI. Make sure to remove all instances of your drive from the Autonomous and teleop VIs.

That bottom example will work…you just need to wrap it in a loop.

I do agree that just calling teleop (or using periodic tasks) makes more sense if you want the robot to behave the same as in teleop, that way if you make any changes to teleop, you dont have to copy them over.

I’ll stand with OP on this one, I ran this code after a 2912 mentor showed me this in his own team’s code.
WORKS LIKE A CHARM!!!

+1 for this. We were able to get 3 rookie teams & our own bot running at Rock City with the fix the OP posted.

If helping out a rookie team, probably want to make sure they place this in the default loop for auto. We had one team that placed it in Alternative 1 in the case structures, and then didn’t change same on the driver station.

I threw teleop.vi in the auto case on robot main, which seems to work. I think I saw that suggestion on CD. But I haven’t tested it more than just watching motor controller while enabling auto to see that they were changing.