Hello! First time poster here so bear with me :).

I am currently trying to implement odometry for my team’s skystone robot. We are using Wizards.exe’s pod design with E8T encoders. I have tested the encoders alot and I am sure the hardware is working fine. We are not using the GoBilda chassis and the encoders are placed differently from Wizards.exe’s tutorial.

I have written some code to track the robot’s (x, y, theta) position. This code seems to somewhat work, here are some of my observations:

Here are some of my theories of issues that may be happening:

Below is my code, but first a few notes:

I have spent many hours troubleshooting this and I am currently at a standstill. If anyone has an idea of why I am getting these large inaccuracies I would love to hear them. Thank you for all your help

Hi @Volt! Welcome to Chief! Thank you for such an accurate description of your code and process, it really help.

You mention as the robot turns and moves at the same time, the (x, y) become very inaccurate. Have you tested to see it they become over similar tests? For example, moving the robot 3 feet and rotating 90 degrees 5 times and seeing if the inaccuracies are near the same.

Thanks for your response!

The inaccuracies are pretty much the same if the same movements are performed.

Awesome, good to know. Next, do you have a measurement of the position of the encoder wheels relative to the center of the robot? If so, I could help you develop an algorithm to solve for the correct delta.

Ill post a image of the encoders with distance labels in a bit once I get access to the robot today. 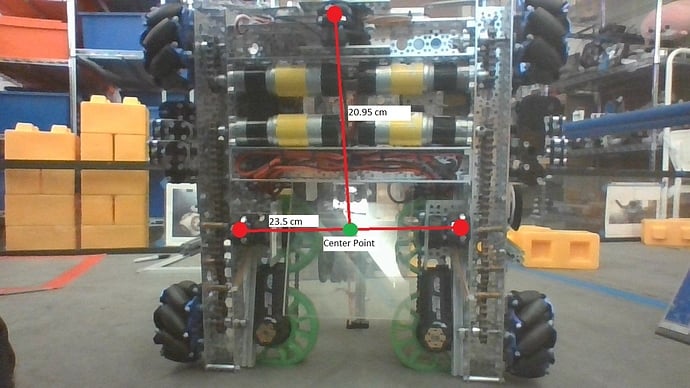 Here is the image. I took some new measurements by putting the robot on top of a clear surface and measuring the distance below.