Anyone with a ZTE Speed device? I’m trying to use mine as a Wifi-Only device but it continues to try to activate on the cell service. At least I think that is what is happening.

Getting interrupts dialogs like:
“Activate Device: Are you swapping this device for one you currently have on your account?”
and
“The network did not respond in time. The sim card has locked. Please powercylce the device”

I set up my ZTE using the above information and have not gotten the activation messages. Key I think is to take out the SIM card and put in “Airplane Mode”, and then enable WIFI.

Thanks for the links. I’ll have a look. Also - Many thanks for summarizing and recapping this thread. It’s extremely useful.

WIFI can be enabled while in Airplane Mode…

Ok… it’s time to get going on doing what it takes to make a robot run with the new control system. Information about the details of the system are becoming public at the FTC forum. I follow the posts by Tom Eng Tom Eng and Jonathan Berling (Qualcomm Engineer) very closely. They posted at the forms and videos on YouTube that demonstrate the new system’s architecture.

Below, I’ll fill in what I’ve found related to my end-of-school-year plan. The links (underlined text) is where I got the information.

My rest of the school year plan as mentor:

A big thanks to Tom, Johnathan, Phil and all the other forum posters who’ve helped us!

Where to start? I feel like a caveman looking at a Ferrari…

I’ll start with the driver station; figure out how make a program to get the game controller (F310) talking to the ZTE Speed. I was hoping to begin with MIT App Inventor, but couldn’t find anything on the internet to get me started. I’ll use Android Studio to program.

If this procedure worked for you, you should see your Android screen change and display “Hello World!” (see below). You now have your “programming environment” set up, and made a program that is writing and loading an app on the phone.

Next, I’ll try running a program from Android Studio that will talk to the Logitech game controller… 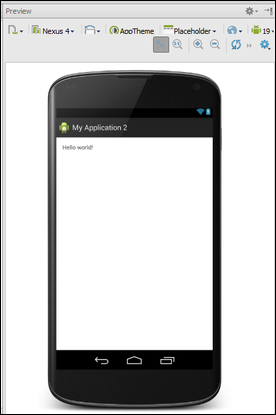 Now it’s time to actually do some work on program files. Up to now, I’ve only followed other’s procedures and relied on the automatic features of Android Studio. I need to understand what I’m looking at in this Android Studio window. There must be over 100 buttons and thingies… 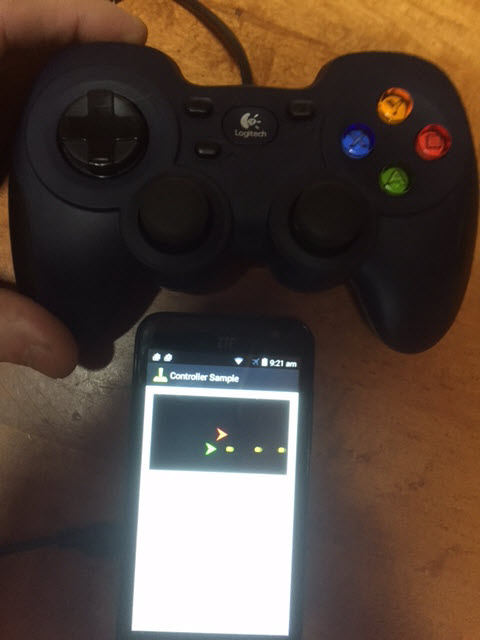 Best buy has the ZTE Speed on sale for 39$. Got one yesterday. Really can’t do much until software and hardware are available.

…Really can’t do much until software and hardware are available.

I’m finding it very educational to set up the “programming environments” for App Inventor and Android Studio, and then going through the “Hello World” tutorials.

Phil Malone has an excellent Youtube video on setting up the “ADB” for programming the robot Android: Tutorial: Wireless ADB Setup for FIRST Tech Challenge (FTC)

Prices are out for individual controllers. No Sensor Pricing. We can’t buy yet, but at least we see the prices.

No Prices for sensors yet.

Pretty good pricing. Here’s the email I got from Modern Robotics Inc.

Modern Robotics has announced pricing for the range of Core robotic modules and details are available on our website at www.modernrobOticsinc.com.

Ordering and shipping will begin around the end of June, 2015 and updates will be posted on our website. For detailed enquiries you can contact us at sales@modernroboticsinc.com.

Tom Eng has posted links to Beta SDK and Apps on the FTC forum: Pre-release apps and software are available for download

The software development kit (SDK) and Android apps for the new FTC robot platform are now available on the Internet. Volunteers, teams and mentors can access the pre-release (beta) versions and begin to learn how to use the new system to create custom robot behaviors with the Android platform.

The SDK is available from GitHub:

Also, documentation is available to help the community become familiar with the new platform:

Please note that these are pre-release (beta) copies. The official release of the software is currently scheduled for June (to coincide with the release of the hardware modules).

I have been maintaining a somewhat organized webpage on my Mississippi Robotics website to accumulate all I can find to help all of us with the new FTC hardware platform and programming. Enjoy and I hope you come up to speed quickly and smoothly. Everyone is being so helpful. It is good to see.

I have been maintaining a somewhat organized webpage on my Mississippi Robotics website to accumulate all I can find to help all of us with the new FTC hardware platform and programming. Enjoy and I hope you come up to speed quickly and smoothly. Everyone is being so helpful. It is good to see.

This is true, however the only phone that will probably be allowed for U.S. teams will be the ZTE Speed at least for this first year. This is due to the WiFi Direct channel changing capability.

I’ve been following the forum at FTC and the programming people’s discussions of the recently released beta of the FTC SDK. I won’t try to keep up with these good programmers’ work until I get my hands on the hardware.

In the meantime, I’m going to get back to a project I started 2 years ago: building a modular drive platform. My son has agreed to work with me again. I’ll start a new thread soon and use the new control system for control.

Modern Robotics modules, sensors and accessories are now available online and can be ordered from www.modernroboticsinc.com. Orders for modules and controllers will begin shipping Monday July 6th.

I successfully placed an order.

I successfully placed an order.

Motor controllers are already out of stock