[FTC] Preparation of a pit area

We are a rookie FTC team, and will be going to our first regional championship. We’ve heard that booth presentation are a huge part of competition and have a huge impact in general.

So to the point, what should our pit area look like and/or be made out of? Are they sort of like booths, or are they like information tables or what?

EDIT: Championship instead of event

It definitely varies from venue to venue what you can fit. Here in Florida most events you basically get a table in a cafeteria. So teams generally have tabletop displays (think science fair boards) some bigger some some smaller. Some teams will have something that sits on the floor. Also some teams have a cart to work on their bot, this is a good move because of the variation from venue to venue on work surface, teams sometimes decorate this so its an extension of the pit space. One paramount way to look great for judges is keeping a organized and clean area.

Attached is a picture of some pits at a tournament we had this year. 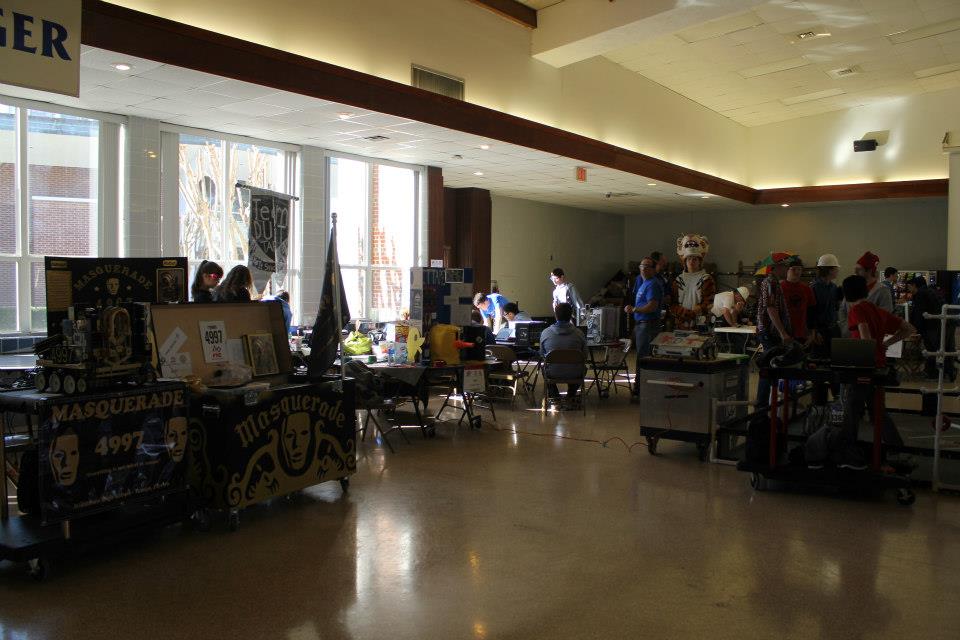 Unfortunately I have no pictures, but I would agree with Andrew. Minnesota is set up in a similar fashion.

OH. To clarify, it’s a regional tournament, or a “state” event, so we’re in a convention center and have a 10’ X 10’ area to set up our stuff

I would guess it will still be similar, though the tables might be better suited to being in a pit (ie. long rectangles rather than circles). I don’t know for sure because Minnesota’s State event is in a high school. But I would guess from what you say, they will be more strict on how much space your pit takes up, so I’d still try to have a cart to work on and go with a tabletop display, likely you will be given a table. Also try to plan how much space your stuff will take up because although pit displays are nice for when judges come around, you still need space to work on the robot and being cramped is not fun.

I got to volunteer for one of the FTC districts here in Virginia this year.
FTC pits can be a little similiar to the FRC pits…you have a table to work
on and a little space in front of it. At the one i volunteered at there
also was a power supply for teams to use.A lot of teams make something for
displays and such to put on the back of the table. I’m including a link for a picture of a FTC pit and table that was taken at Championships. While its not the best picture…it will give you a idea of what some teams do.

Lair of the Uber Geek

This blog will will contain my rather pedantic ramblings on my experiences within the miniature war gaming hobby. There will be informative how-to’s, thrilling battle reports and thought provoking editorials. I fully expect that history will one...


(Scroll down on the page to find it)

For more ideas…look for pictures of FRC pits since they are similiar (but FRC teams have at least two to three days to use theirs)…also keep in mind pit areas can vary from venue to venue (as they also do for FRC) There also might be some helpful hints in your FTC rules on pits.