I remember my team doing this one event as well. When everything was connected by serial port, it was much easier to pull a laptop around. I still have this image in my mind of a mentor chasing after his personal computer as the robot dragged it around the practice field. It certainly didn’t hurt that he looked almost exactly like an older version of Napoleon Dynamite. It ended up destroying the serial port on the IFI robot controller. After that we started trying to always use two serial cables connected in series because they would be separate from each other and couldn’t be screwed together.

Thank for sharing this story! Here’s something I made so that we’ll never make the mistake of running out of code. 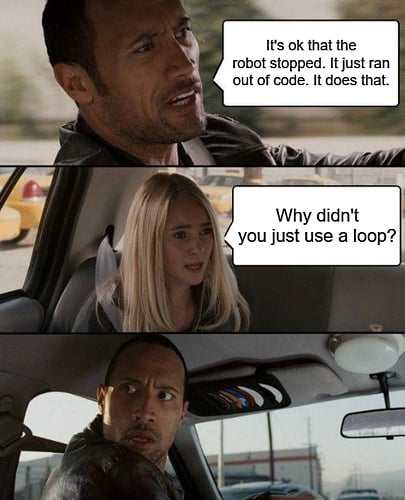 From my rookie year, I learned a valuable lesson on testing code before committing it. We were working on the robot late night, and I was one of the only programmers in. We had first comp in about 2 weeks. I forget what it was, but I did something in the code, deployed it, was about to test it but we suddenly closed for the night. So I didn’t get a chance to test it, but I was dumb and just committed it to the GitHub before I went.

I wasn’t able to be right in the next day, about 4 hours after opening was when I was able to come. Turns out what I made caused the robot code to crash, and my lead and my programming mentor couldn’t figure out why it was happening. They released that I was the last one working on it, and frantically tried to ping me on slack to figure out what I did. I didn’t realize them trying to contact me until I was at the space, and it took one line to remove.

I learned from that day onward never to write code, not test, and commit it to the working branch. Whoops. 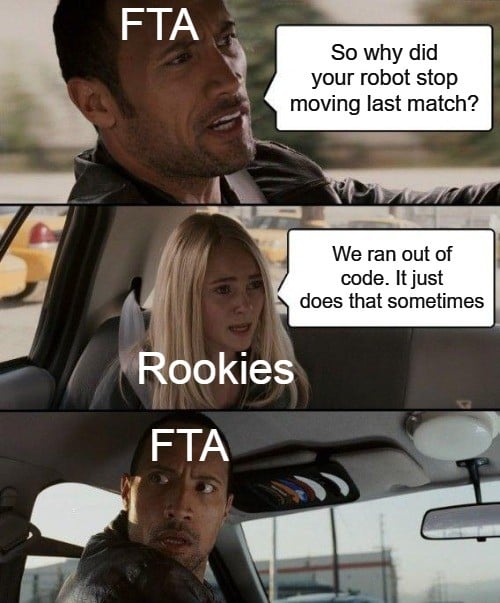 I can sympathize with this. In 2016 we used acrylic to make a belly pan to mount all of the electronics. Since many of the wires were so close to the ground, we also made an acrylic plate to protect them. Well, if you remember Stronghold, due to all of the terrain you had to drive over, that game was pretty brutal on the undersides of robots (especially when driving quickly over the rock wall). It didn’t take more than a day when we started to see cracks form. Before it shattered completely, we made a new belly pan out of aluminum cut on a water jet. It took 5 straight hours to swap out the belly pans, but we’re ultimately glad that we did. I don’t think those acrylic plates would have lasted one practice match. From that point on, our team made a rule to never put acrylic on the robot. We never had any issues with polycarbonate though. 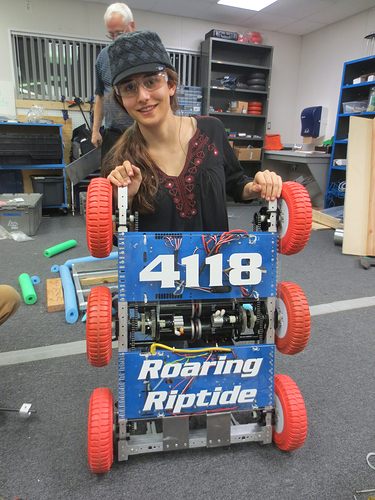 The Bit Buckets (4183) build competitive robots primarily out of wood every year, so there’s no shame in that. PVC pipe on the other hand…this year we were looking for a way to support the electronics belly pan that was fitted between our robot’s drive train gear boxes. We had a PVC pipe that worked perfectly, but we were a bit embarrassed about using it on our robot. So we got some black paint and tape and voila, the Slim CIM! 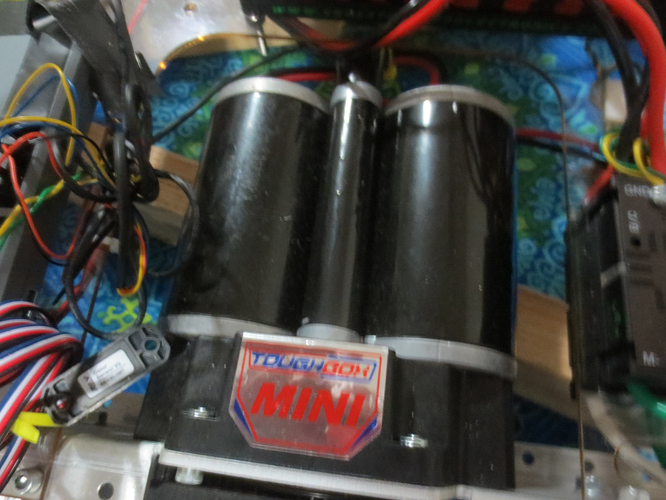 Once I visited a rookie team mid season, they were using the kitbot chassis, so I asked which configuration they’ve chosen, and with that they discovered they had to cut the chassis “but it comes in the KoP and isn’t of the right size?”

Oh gods no. Were they able to fix that?

With a hacksaw you can fix anything

A couple years ago at the Orlando Regional, one of the robot inspectors asked if I could help another team debug their pneumatic system. There was something seriously wrong with it, but due to the high volume of teams trying to get inspected, he didn’t have time to help them trouble shoot their issue. I learn that they are a second year team, but it was their first time using pneumatics. I walk over to their pit, talk to them, and learn that the main issue that they are having is that their working pressure wasn’t properly being regulated down from 120 psi. I asked them if they have a regulator and they reply, “Of course!” I asked them where it was, and the head mentor walked over to their tool chest and pulled it out from one of the drawers. I just smiled and said, “Well there’s your problem!”

I was a second year mentor when we started 7277 and we did so by buying all of the FIRST parts from another team who competed in 2014-2015 in order to play an off-season event(I didn’t want an FRC season to be their first taste). In that time they built another drive train that worked well and hooked the students on the team.

So six months after starting it’s 2018 and 7277’s first regional. We are typical rookies in that we have had almost no drive practice before putting the self-tap screwed wonder in the bag.

It takes almost all practice day to get inspected but we do get some practice time at which point the drivers note that the robot doesn’t drive straight.

We decide to have the programming team rig up a fix by throttling one side of the robot because we can’t figure out anything mechanical that could be wrong.

At the Canadian Rockies Regional we win Rookie All Star but were not particularly competitive. Regardless we managed to bash together a foray to Houston Champs.

At champs after a disastrous first morning we are walking back from lunch and my mecahnical lead is trying to convince me to let him disassemble the drive base to swap out our omni wheels for grip wheels (we originally had an h-drive that we abandoned but hadn’t changed the omnis). I tell him it’s a bad idea and then have to go get a seat in the stand sorted with the scouting team. I arrive at our pit to a dis-assembled drive base.

This next part is fuzzy in my memory about why they opened up the gearboxes in this process but they may have needed to change the drive shafts. So as I’m standing there contemplating my mechanical team’s life choices, my electrical lead picks up the two main gears from the table, looks at me and asks “are these supposed to be the same size?”

…We made it through one regional and half of Champs with two differently geared sides of the robot because we had used the gears from the other high schools kit on one side, not realizing that the gears were different sizes.

We are better now, or so I keep telling myself.

Another funny story. I was working with a rookie FTC team that managed to qualify for the AZ/NM State Championship. The programmer had been modifying the code before a match in order to try and score more points during autonomous mode. We only had a minute before our next match, but I asked him to quickly test it on the practice field. He enables the robot, and to our surprise, all of the robots movements were reversed (drove backwards instead of forwards). The programmer was frustrated knowing that there wouldn’t be time to change the code before the next match. So I asked him, is there a way we can get the robot to do what it needs to do without changing the code? He looked at me, puzzled at first, then it dawned on him! He took the robot to the field, set it up facing the wrong way, and then smiled as he watched it perfectly execute it’s autonomous mode, all while driving backwards.

I inspired a similar “aha” my rookie year mentoring, though it took a little bit more prompting. This was 2013 Aerial Assist, and our climber used a lead screw (OK, threaded rod and coupling nut) for part of the task, to level the robot while in a hang. The rod was direct-driven by a motor. I explained to one of the students that we needed the travel to come all the way back to “here”, which was about three inches inside the frame perimeter. As it was set up, the motor would have stuck well outside. After a couple of seconds, he said “we can’t do that.” I then handed him a couple of pulleys and a short belt. About three seconds later, the next iteration was under way. 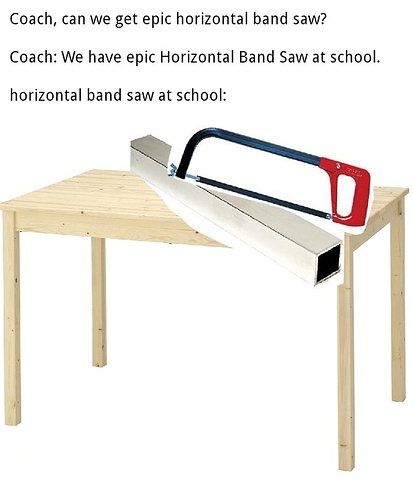 band saw? heck my team didnt even have a electric power tool (besides impact drills) until their 3rd year

Swiss army knife is weak; use your bare hands for everything, especially stripping wire. During my time as a student, on every comp robot except for the 2017 bot at its second event, there was at least 1 wire that was stripped with fingernails. Usually it was smaller wires for sensors/limit switches though.

You only use your hands?! Weak. True gods use their bare feet for everything.