The at home challenges seem to be pretty interesting so far but my team is a bit confused on the rules for the Galactic Search Challenge. Mainly it has to do with rule GSC2 and how the randomization works. And also how the signaling plays into it all. We originally thought that we would have four paths and just run those but that seems like it isn’t a challenge or the point. So what are we supposed to do with the pathing, have the robots start somewhere and then identify the balls then move to them or can we have predetermined auto paths we select from?

While you could use something that constantly detects balls, you really just need good pathing with an intial yes/no about which starting spot has a ball on it.

This is the thought that I had after I did my quick reading of the rules.

If you are vision-impaired, you probably could drive up to the first point with REV color sensor pointed where the ball should be, and decide if you are in the right spot or not then. It is not quite as fast, but would work if otherwise having good drivetrain trajectories.

But what I don’t get is that reading the following rules, it says you must place the balls at the red or blue points. So are we supposed to pick or place power cells?

You place it there before the time starts, then ur robot goes through and picks them up

I am also confused by the rules of this challenge and also about its fairness. It seems clear that rule GSC2 means that a given team will either be doing blue points on both paths A and B or red points on both paths A and B. The fairness issue is that the blue points are farther away from the start point so require navigation precision over longer distances. So a team whose random choice is blue is disadvantaged relative to a team that is doing red.
And while SC2 says that the red/blue choice may not be directly signaled, is it the case that whether the field is in A or B configuration may be signaled?
We’re probably going to need some Q&A on this one.

This reminds me of 2018 scale/switch randomization.

I think it’s fair because with the red one, while close to the start, is further from the end. So when you complete it, it’s the same distance because the blue path is closer to the end farther from the start.

I haven’t seen anyone else bring up this idea yet, but the randomization aspect seems really easy to circumnavigate. Lets say your team makes an autonomous program that only works if you randomly get the red paths. If you then randomly get the blue paths, there is literally nothing obligating you to do the blue paths. Unless I’m reading the rules wrong, I’m pretty sure that you could just scrap that attempt and start all the way from the top. Sure, about 50% of your runs would “fail”, but all you have to do is get 1 good run and submit it, you don’t actually have to worry about being consistent. I can only assume that the randomization aspect of this challenge is to force the autonomous programs to be more adaptive, but i cant think of anyway that FIRST could really fix this loophole without fundamentally changing how the randomization process worked.

Also, another thing on whether or not you want to go for red or blue paths, I’m thinking that the red path will overall be better than the blue path. 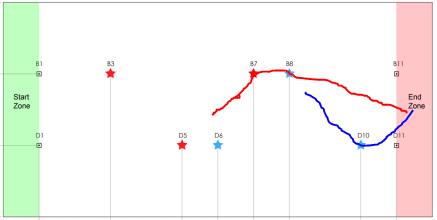 These are just my thoughts on this challenge, and if anyone has any insight on the way randomization works it’d be much appreciated.

I think you’ve hit on one of the core issues with the randomization for a pre-recorded challenge submission.

However, the paths are theoretically balanced for Red and Blue. The B1/D1 markers (or A1/B1 as the manual uses) are only there to define the plane that designates the start zone. Same with B11/D11 for the end zone. There’s no rule that says you have to start between or end between those coordinates, only that you must start with bumpers breaking the plane of the Start Zone and end with bumpers breaking the plane of the End Zone. This challenge has no markers and no penalty points, unlike the AutoNav and Hyperdrive challenges. There’s nothing forcing you to turn after that last blue point before the end zone, you can just continue along the diagonal into the End Zone.

So the fact that the paths are 180* rotationally symmetrical about the center makes them theoretically balanced. The only “unbalanced” aspect is that you have to start with the robot at zero velocity, but can stop timing with the robot at non-zero velocity, which means the ideal path shapes may not be exactly symmetrical. But I expect that difference to be small if not negligible.

Oops, I thought the 5 second marker penalty was a general game rule, thanks for letting me know. I still have a feeling the red path will be slightly better because you don’t have to decelerate to make the turn between the first and second powercell because you’re already a lower speed.

I’ve thought the randomization is easy, and possibly intentionally that way. Remembering that it is a challenge that teams without shooters can do that might struggle with a harder challenge. I do think a more difficult challenge is easy to come up with and I have an idea.

I’ll call it the Universal Search Challenge. Basically, you have to complete 3 consecutive runs. And that each power cell is placed by a coin flip. You end up with 9 coin flips to setup the submitted course instead of 1, which gives 512 configurations, so you actually have to search.

I also have considered a dropoff zone, meaning you either have to dump or shoot balls out before finishing your run. Since that would require some ability to not just scoop up powercells.

As far as randomization, the USC would have 3 binary power cell placements, so you’d flip for ball 1 (a or b), then ball 2 (a or b) and ball 3 (a or b). And repeat that for each of the consecutive (3 total) runs.

If course distance is a question, you could have paths for all 512 combos, and normalize for overall distance, since there might be slight difference in distances. I wanted to average/sum more than 1 run to diminish harder/easier courses, but it still might be a factor.

But this is just a thought, maybe something to have an unofficial game later. It would take some sensor to find the balls, versus the weak randomization of the GSC not really requiring that.

I think Chauser was saying that you have a better chance of picking up the fuel cells if they are closer. If you drift by a degree, picking up an object close will be less impacted than a farther distance.

Yes, that is what I was trying to say.

but the randomization aspect seems really easy to circumnavigate.

I agree. What is to stop a team from only programming a red path and then throwing out all the times they randomly get assigned blue?

The B1/D1 markers (or A1/B1 as the manual uses) are only there to define the plane that designates the start zone. Same with B11/D11 for the end zone.

I don’t read the arena diagram as the markers B1/D1 and B11/D11 as notional or there to visually define the start and end zone.

I see them deliberately placed there, and you may not place your robot at the start over that marker, or finish the end zone hitting those markers.

the definition of the start and end zones are as stated, the line from A1 to B1 indefinitely. GDC could have said A1 to F1, that would be no different, but perhaps a little clearer to everyone with common sense reading.

Should FIRST do the “coin flips” for all of the teams?