We were curious if were able to grab onto the Traverse Bar from the Mid bar, what would that swing look like?

Well, we made a pretty quick and dirty test rig; added some bumpers and some weights from the School’s Weight Room and tried it out.

Test rig uses the bumpers from our 2020 robot and the rig is weighted to be 155lbs.

First test we wanted to see how far it would push the workbench and it moved it about 40in.

Second and onwards testing, we strapped the work bench to prevent it from moving. It makes a pretty good thud and clang.

A couple questions we still have:

These hits seem no harder than someone driving at the full speed into the wall (happens often in autonomous when code or encoders fail).

As long as you’re into the diamond plate I think you’re (rules-wise) fine.

that was my concern. if a robot is a little too high, its not hitting where the field is designed for big impact

In one or more of the FRC games played during the last decade, there was a fairly popular auto mode that field volunteers called “damn the torpedoes,” because it resulted in high speed impact with the driver station wall. The field perimeter became distorted, requiring FTAs to use come-alongs, mallets, and other extreme measures to get it back into correct shape. Head Refs were not pleased when that caused matches to be delayed, and they generally went looking for robots that had caused the damage and gave teams a good talking-to. In some instances it may have gone further than talking. Head Refs have a lot of discretion when it comes to stopping one team’s actions that diminish the event experience for other teams.

that looks much closer then where the wall will be on the real field unless my scale is way off. what’s the distance from the bar to the wall you have here?

that looks… violent. I wouldn’t want to be behind that driver station when that happened.

If I’m reading the dimensions right the wall should be 3 ft away from the traverse bar. the distance for traverse is just 28.5 from the high. As long as teams are smart about keeping that number in mind they shouldn’t get close to the wall, they would have to be extremely over extender and swinging about 180 degrees. Might be missing something but I think that checks out

It looks like you are releasing your robot from about a 45-degree hang angle. Did you calibrate this angle to what you expect your robot’s orientation to be on the bar, or were you just going for the worst-case scenario?

yep, the distance is in relation to your frame orientation, not the floor. It looks legal to me.

The test rig was definitely not outside of the frame perimeter as it was setup as a vertical bar and top to bottom was no longer than 66in. 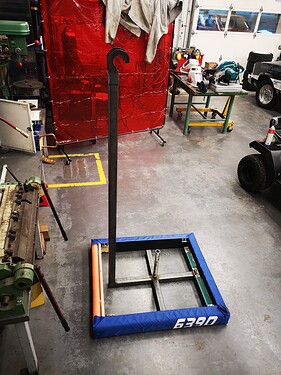 Here is the geometry that we used during the test. We never put an angle finder on the arm during the test, but solidworks puts it at about 34 degrees from horizontal. Our measurements for the bar and the release point were pretty close, definitely within an inch. The workbench was eyeballed about 40in horizontally from the Traverse Bar. 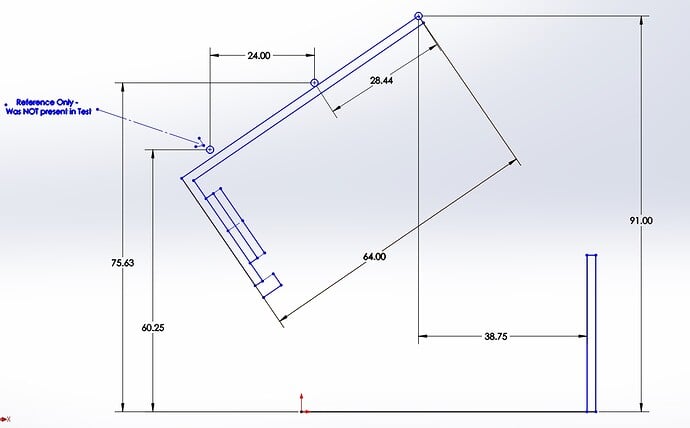 If someone notices something that isn’t legal in this, please let us know so we can adjust before we go ahead with further prototypes.

I remember helping to tear down and pack up a field one year (Aerial Assault?) where we noticed the Alliance Wall was several inches from where it was originally stuck to the carpet because of the robots hitting it.

Thanks for sharing the geometry used.

By H308 (Don’t bang on the glass) I think heavy, preventable contact with the driver station wall might be frowned upon. It’s more of a conduct rule IMO since we don’t have the sandstorm curtains this year, but I think it’d be absolutely within the power of the head ref to give a team a verbal warning if they were repeatedly climbing in a way that makes them swing uncontrollably (G101.a).

H308 has to do with team members banging on the glass. It has nothing to do with robot interactions.

I will always miss the banging of the glass

I’m aware it’s more of a conduct rule, but given that it was originally implemented to protect mechanisms on the alliance wall / glass, it’s possible that a robot that repeatedly and forcefully contacts the glass while swinging on a rung could possibly be considered dangerous under G101. Again, H308 is a conduct rule, but a 100+lb robot would contact the glass under far more force than a team member’s hand.

I would find it difficult for ref to enforce a human conduct rule on a robot. I do agree that swinging into the station would damage the station and possibly cause a yellow card.

Agree with everyone that’s said that this looks about the same as a high-speed run into the drivers station wall on the floor, but Richard’s insight here is spot on. I would say that this is actually worse because one team doing it every match is going to be 8-17 times during an event (depending on district/regional, elims, etc), whereas high speed collisions like that occur maybe once every 10 matches. This is also worse because it is higher up, so it is further away from where the alliance wall parts are “grounded” and there is going to be a greater force on the pegs holding those walls together.

Whenever you see the field distort in some way - carpet pulling, wall segments moving out of line with each other, field border “curving” - it is causing permanent damage to the field in some way. Carpet pulling will cause bumps that will not come out during the event and will make everyone miserable. Field border/wall parts have a little bit of wiggle room at their joints to allow for compounding tolerances during setup, so they can usually shift a bit before they start actually deforming, but repeated hits like this - especially so close to the ends of the alliance station wall panels - are almost guaranteed to start bending the aluminum pegs on the wall dividers. While this may not affect your event as it’s playing, it is going to make teardown for your event hell, as well as setup for subsequent events.

If a robot is repeatedly causing field damage and/or distortion, that team is going to have a lot of discussions with the key volunteers (Head Ref, LRI, FTA, etc). I would strongly urge anyone looking to do this to try and curb it as much as possible to reduce the impact on the wall. Thanks @bchina and team for doing this; I was also wondering what this would look like and it’s great information to have.