Has any team pulled of a fully autonomous match?

Have any teams played fully autonomous matches? I’ve vaguely heard that 3 teams have pulled this off but couldn’t find examples after a few minutes on google, so logically I turned here.

This is the closest I can recall

I think i remember being told 910, if left undefended last year, would run fully autonomously but I might be completely wrong on that.

I want to say team 1987 was mostly autonomous in 2015 as well. I wasn’t around for that year, though so I may be mistaken.

Not fully autonomously, but a lot of what they did was automated unless they were defended.

I am a programming mentor for 1987 (since 2013). Yes, our robot was fully autonomous for the entire match. We had a button box with several manual controls if totes got jammed or some other mishap.

Not sure about this, but 2013 wouldn’t surprise me with the full court shots

It happens every single year, even for rookie teams. For some reason the joysticks are unable to control the robot. Thus, the robot does not move the entire match. This robot is fully autonomous for the entire match.

2013 featured several robots that did a 30 point hang and nothing else. I wouldn’t be surprised if some of those were autonomous.

Now l can tell my friends that our robot was fully autonomous!

190 in 2004 built a robot that almost couldn’t be driven by the humans. It would drive up and grab the end-game bar in Auto. The only contribution of the human drivers was to move an arm from one side of the robot to the other and occasionally steel a ball from the other alliance.

This is the closest I know of.

The TechHOUNDS were very close to being autonomous in 2004 as well. I think Autonomous mode got us driving up and reaching to the bar, ready start winching up.

The team ultimately decided not to begin winching, since the drivers couldn’t recover if it failed.

Once on the bar, the robot could roll back and forth to defend it. Not a whole lot going that year for us

Other than being a (relatively) good pick from 469. If only the winch motor hadn’t died…

That’s actually part of what we are working towards! Its definitely possible given the right sensors, processing power, and software. In another thread, I posted about using ROS on an NVidia jetson to control and guide the robot in just about any environment. Some work is needed, but it should be possible for the robot to autonomously evade defending opponents to some extent. See the GitHub repo: https://github.com/JakeAllison/FRC-ROS

As a programmer, I definitely empathize with the desire for a fully autonomous robot, I’ve dreamed about one ever since I started programming. However, I think a fully autonomous robot in a game that has any reasonable interaction between robots (excluding auto-climbs in 2013 or conveyer bots in 2015) is pretty silly from a competitive standpoint. The reason is that your human drivers have attached to themselves, among many other things, better cameras than any robots have, VASTLY better image processing capabilities than any robot, a very detailed and accurate predictive built-in physics engine, easy ability to communicate with alliance partners, and on-the-fly adaptive strategy capabilities. Choosing to outright ignore these advantages doesn’t seem very wise for FRC (although there are certainly other fun fully-autonomous robots you can make). The better choice is to use automation to do the things humans aren’t so good at, and use the humans to do the things that the automation isn’t so good at. Without having to worry about their respective difficult tasks, both can be freed up to even better do the things they are better at

Basically, the pursuit of full automation will be beneficial competitively up to a point, and then start to cause more harm than good.

Stretchy & Fetchy from 1657 is by far one of the most unique takes on an FRC robot I’ve ever seen, and probably one of the closest to full-auto. There is teleop driving, but only on a couple of pounds of their robot. 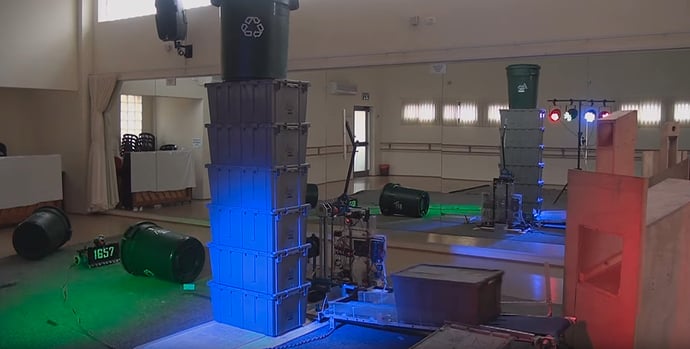 This is only a matter of time. Some time in the near future, FRC will be the next battle ground for AI vs Humans. Like Chess, Go, and Starcraft II, I predict humans will loose.

4488 Shockwave’s 2015 robot could run a match autonomously. I don’t know if they ever had a full autonomous match (partners had a tendency to force some human intervention) but if left alone it could grab the cans, drive to the HP station, stack the totes and then drive and score the stack autonomously. My recollection is most matches their driver left the controls and went and helped organize totes for the human player.

Just wondering, how many times did you need to manually override?