So we are having problems trying to put Andersons connectors onto our Spark Max Controllers, do you guys have problems with this, if so how do you deal with it.

What specific issues are you having? Do you have a picture?

it mainly trying to put the Anderson on the wire for the controller, it won’t go all the way into the Anderson, we’ve never struggled with this problem for other stuff just this. 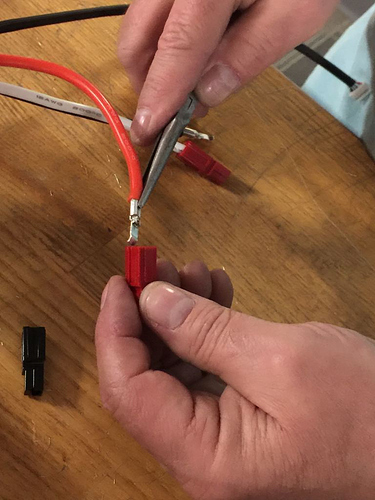 I mean, there doesn’t seem to be anything particularly wrong. Wire is wire, it’s all essentially the same when it comes to crimping, so long as it’s the same gauge.

I know my team uses Anderson’s on the spark max, and they fit fine. This is a user error somewhere along the line.

Does this make sense?

Your wire is stripped too long. There should be a gap between the small flaps and the large flaps.

I did notice though, when I was crimping on CIM motors, it just failed completely. They slid out without any issue. I did first 45A then put it in 30A and it was fine. Do I have to adjust the crimper for CIMs? I didn’t experience this issue with any of the wire on NEO or speed controllers

I have actually been doing the same - crimp on the 45A position and then cycle the contact back through the 30A position.

Nope, the CIM have 14 gauge wire coming out of them. It’s specifically chosen by the manufacturer to handle the current loads for the motor, given the length and type of insulation, which is why it’s allowed as part of a 40A breaker circuit.

Your wire is stripped too long. There should be a gap between the small flaps and the large flaps. 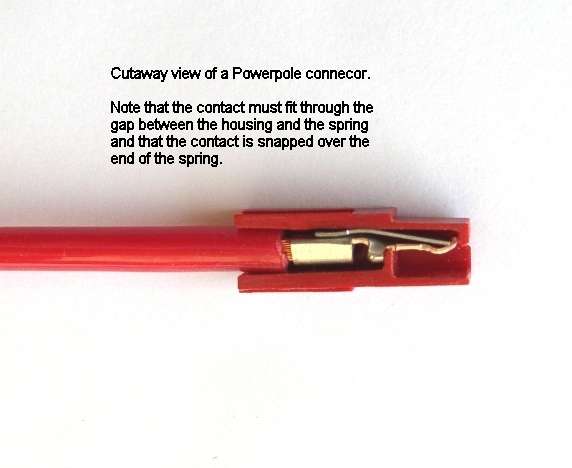 Looking at the cutaway image on powerwerx, I don’t see how this could cause an issue unless this somehow caused the connector to straighten out too much. However, the cutaway DOES show a gap here, and the few connections I took apart this evening (some I made, some were factory) were all crimped with this space empty.

What does your crimped connector look like from the side (looking at the edge of the connector tab)?

I haven’t had any problem inserting using 14 or larger wire as long as the insulation comes right up against the connector; if you leave a gap there, sometimes it is too flexible to insert without risking damage to the wire at the edge of the connector. (Including several SPXs and SRXs.)

In any case, it probably can’t hurt to try cutting out the excess wire with a pair of flush cutters oriented with the pin parallel to the wire, taking care not to cut into the connector.

Sometimes I’ve had Anderson powerpoles give me a hard time fully clipping in to the housing when the terminal end of the contact (regardless of whether 30A or 45A) is bent downwards (towards the spring in the diagram posted by @GeeTwo ) little bit. Try bending it up.

Try bending it up

If it doesn’t look like the cutaway pic, I agree. In case it isn’t obvious, use two pair of pliers, or a vise and a pair of pliers, both holding the connector - NOT the wire.

I just located and removed the housing from an SRX which has wire in the “notch” on the green lead. The side profile is a lot like the cutaway image above except for the stranded wire end filling the notch, and I am not having problems with insertion, and only the usual problems with removal. (I don’t have the right tool and am just using a jeweler’s screwdriver.)

I little late to the party here, but have you considered switching away from the Powerpoles? We’ve used the XT60 connectors exclusively for the last 3 years now and have never had a connection issue since. Now we are going to be looking at going to the Neos, and we are going to use these Amass Bullet connectors. Yes, they need to be soldered. Yes, they are slightly more difficult than crimping, but they are again proven extensively in the RC world. I expect them to perform as well as the XT60 connectors.