Hi there. I’m a programming mentor trying to gain some knowledge for my team. We are trying to reduce weight right now and one option that we have is to replace the two CIM motors we have for our shooter with 775 pros. The build team is reluctant to do so since we have a history of burning these motors up in past years when using them for mechanisms such as arms and climbers. My current understanding is that we are only at risk at burning them up if we stall them, which I think is low risk in our shooter this year. Can someone explain to me, in laymen terms so that I can relay the info back to my team, what considerations do we need to take into account to help us assure ourselves that we are not at high risk of burning out the motors regularly? We are using Java and TalonsSRXs, so if the answer lies in the programming (like current limiting) we can handle that.

Also, on a mechanical front, can someone explain the pros and cons to me of gearing the motors down for our shooting application? We have a setup with wheels on both sides of the power cell spinning to project them. My basic understanding is that the wheels will spin faster with no gearing, but what’s the expected outcome when the power cell hits the wheels? Would they pretty much instantly stop due to the lack of power (is Torque the right word?).

Thanks for helping the computer guy understand the world of physics.

From a software standpoint, you can read the current values from each channel of the PDP (that is if it has a CAN ID of 0). Once you determine which channel corresponds to a 775 motor, you can set a current limit to the motor to prevent stalling at high current draw. That might be the easiest way to setup some current limiting AFAIK

To discuss the motor replacement you are considering, we need to consider the motor no-load speeds. The CIM, MiniCIM, NEO, and Falcon all have similar no-load speeds. At present you are direct driving your wheel from your motors. Changing to any of the other three motor listed, probably will not require any gear reduction.

Does this make sense?

Or use the integrated current limiting in the TalonSRX, which will be able to respond much faster than a RIO to PDP call, then a command back to the Talon.

I’ve never used a TalonSRX before, very cool feature to know! I would definitely go with this!

If you have the means you can swap them for NEO’s or Falcons if you can find some.

We run 775s for our shooter. They have internal fans, so as long as they spin, they are happy! They run at ~18000 rpm though so make sure you have the right gearing. We are using 3:1 versaplanetary gear boxes. 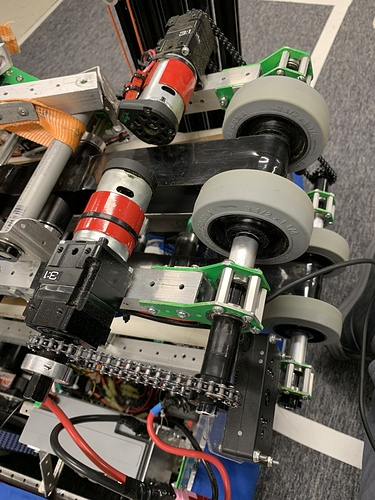 So how does one go about figuring out how much current is too much. I think I may have read 6amps at stall is bad news? My college EE professors would be so ashamed of me right now. Good thing I went the programming route.

Not entirely true. If you bog a 775 down for too long, you can still damage them. An absolute stall is not a requirement for killing them.

We have one spare Falcon right now and 2 Neos on the shelf but no spark max’s. I need to figure out a way to justify the cost of another falcon, or 2 Spark Maxes plus the learning curve of using a Spark Max (which doesn’t scare me too much).

Thanks for the suggestions

I think my team burned one up in prototyping this year when connecting one directly to battery and it didn’t stall. Can someone enlighten me on the obvious reason this happened? Too much current from the battery? Does a controller limit the current going to a motor (other than when using TalonSRX limiting feature)?

Sorry for all the basic EE questions. I’m 20 years removed from those classes

If you had a 3:1 reduction, to can operate the motor at 10.6 Volts (or 88%). At this point you will be able to develop far more torque; this operating point is more suited to the higher speed motor.

This. As long as 775 pros are spinning with minimal load, such as turning a flywheel, they won’t burn. If, however, you are trying to turn a load in which the motor is drawing lots of power and is stalling (or close to it), the motor won’t get proper airflow and will burn.

Edit: To solve the speed problem, gear down the motor to about what your cims were running (gearing down the motor will also help with overheating), and I suggest adding a PID velocity loop so that your flywheel is running at a known speed.

our team uses 2 775 pros for our flywheel as well, running at 2 to 1. There is little to no worry that they will burn out(but this also does depend on the compression/wheel size. I can’t think of our team’s compression at the top of my head but it is less than 2 inches for sure and our wheel size is 4 in colson). From a distance away from trench and goal, we are only running ~50% power, 30000 encoder velocity on the shaft. We have been running tests on our shooter for more than 10 min, non stop and they work fine without heating up.
You need to, however, make sure the flywheel is up to speed before putting the balls in because the motors will stall at too low of a speed.

A shooter is a great application for 775s. You can get ridiculously high speeds out of them as long as they’re geared high enough to overcome the rotational inertia needed to get your shooter spinning to begin with. The speed are high enough that teams are actually worried about their wheels flying apart.

Recognize that it isn’t the motors that throws the ball – the motor is just a mechanism for adding energy to your flywheel. Once your flywheel is up to speed, sticking a ball in there is a transfer of energy from the flywheel to the ball. That happens really fast, and then the motor kicks in to get the wheel back up to speed.

And, changes of stalling the shooter is pretty slim – you’re more likely to just destroy the Power Cell than stalling the motors. (Because there’s a ton of energy stored up in the wheels all being directed at trying to get the power cell out of the way.)

Make sure the vents on the face aren’t covered and intake air.

VEX has a website that explains characteristics of DC motors and how to select motors for an application. They also publish test data of the most frequently used FRC motors so that teams can make more informed decisions when designing.

If you go to the page for the 775pro motor data and scroll to the bottom you will find a graph for a Locked Rotor Stall Test. This graph shows the amount of torque the motor outputs over time at different voltages when the output shaft is locked in place and can’t rotate (stall). The points on the graph where the trends drop quickly to 0 torque represent the length of time at stall where the internals of the motor burn up and it releases the magic smoke (destroys the motor).

So what can we infer from this graph? At full 12V power the motor will burn up very quickly at stall (on the order of a few seconds). If you want to be able to leverage the full power range of the 775pro you must design in a way to prevent the motor from stalling for any length of time at 12V (either mechanically by say a clutch or through programming by current limiting). If this is beyond your team’s capabilities or still too risky based on your application/past experience the graphs also show another way to reduce the risk of burning up the motor - limit the maximum applied voltage. At 8V the 775pro can be stalled for around 20 seconds before major damage. At 6V the time to damage the motor is beyond the length of an FRC match, which means you can safely use the motor in just about any application (except for prolonged practice) without major concern.

Turning down the maximum voltage comes at the cost of losing some of the motor’s power (and maximum free speed), but if you can live with it for the application then it is a viable option. We ran a single 775pro to power an elevator and arm for our scoring mechanisms in the past two seasons and never burned out either one through this approach. Since we had no experience with the TalonSRX and limited student programming skillset we just limited the maximum motor output to 50% at all times. It’s not the optimal solution but our focus was on basic reliability not eeking out maximum motion speeds.

Thanks for the link and the explanation. I think I had looked into this kind of stuff last year when designing our arm, but couldn’t remember the steps I took to get to the proper gearing without burning up the motor. We broke our arm in the first match and totally redesigned the bot for the rest of the competition and season so we didn’t get a lot of validation that we did it correctly since we stopped using it after one match.