This isn’t Wayne C. I’m his son and it wont let me log him off. But anyways I need to know how to read the performance curve of mainly the cim motors that are at

What are they set to run at though?

that is confusing - they nested two graphs together

the torque is a function of speed - so at a certain speed you look at the downward sloping (to the right) line to see what torque the motor can supply at that speed.

so, for example, at 4000 rpm the motor has about 80 inch ounces of torque. draw a vertical line from that one down to the current line and it looks like it takes about 30 amps at that speed and torque.

couple things to keep in mind - the graph is only with the motor on full throttle at 12V - so if you run it slower it wont draw more current, because the victor is holding the current back

At full power you cant have a drive train that will hold the motor at an rpm that requires more than 40 amps, or the breaker will kick off - that means if your robot is blocked you either need to be able to spin your wheels, keeping the motor rpms above 3500 RPMs, or you need to use the current sensors and shutoff the motors when they are being stalled.

oops! forgot your question: 5250 RPMs is how fast the motor will spin if you have nothing connected to the output shaft, and you run it at 12V - thats its ‘no-load’ speed.

edit: I colored and labled the graphs from the spec so everyone can see it better. 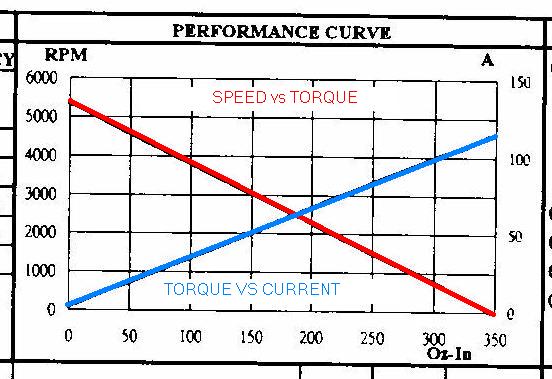 Ok im trying to think up a gear ratio. So im taking the direct drive and compairing it to what I want it to drive at. What I did is I took the rpms and i multiplied it by the circumfrence of our tires and then i divided by 60 to convert it to inch/minute/sec. but its coming out way to large…

What do the CIM motors normally run at(RPMs)!?

This is wrong why?