Holding an arm in position without burning out the motor

Other ways include analyzing your system to get the appropriate power requirements. If you can approximate how much torque is required to hold the arm up at a certain point, you can relate that to published data by Vex and see what gearing you’d require to achieve your desired speed and torque while moving the arm, and ensure that it had sufficient holding power. The more you gear a given motor, the happier it will be holding position, but your speed will be affected inversely to the increase in torque from gearing (and thereby, decreasing the current draw to your motor, which is what kills it in the first place).

What you should take away from that, is that if your motor and gearing simply don’t have the power to accomplish what you’re asking of it, you can’t program anything to solve that. At that point, if you don’t want to change gearing, you should go the route of adding in mechanical solutions to assist the motor like @Jon_Stratis said.

If you look again at the 775Pro locked rotor stall test, you’ll see that the 4V and 2V curves extend out past 300s; you’re probably fine if 4V is enough to hold up your arm. If it’s not, you can gear your arm slower (more output torque at 4V), do one of @Jon_Stratis many suggestions to reduce the necessary motor load, or use a different motor that can survive being stalled at a higher voltage.

Counter-springing/counterweights or brakes are the most common ways, but if you know what your height(s) you need to deliver, you can design the arm so that the hold position is top dead center, and you won’t need any force to hold it there, just enough to correct as it slides one way or the other…

An alternative advice, do use a 775pro but with the correct gear ratio. You can stall a 775pro for quite some time at a low voltage. Use a tool such as JVN’s Mechanical Design Calculator to determine what current you would be pulling from the motor. I would also do some napkin physics to see what your holding voltage is. Your arm is going to require the most power to hold when it’s horizontal, because its entire gravitational load will be applied to the axis of rotation. Figure out the torque applied by gravity and that’s your holding torque. Now determine what your output torque is from your gearbox with your motors and gear ratio. Torque (roughly) scales linearly with voltage, so you can divide 12V by (your gear ratio torque / arm holding torque) and get the maximum voltage required to hold the arm horizontal, and that’s your holding voltage. I’ve found that keeping 775pros under 1.5 volts for holding allows you to last the majority of the match stalled at that position.

You can also split the load between multiple motors in parallel, such that none of them are being stalled with enough current or time to burn out. This amounts to the same thing others are saying – get the voltage on your motor down far enough that it can be stalled indefinitely. The difference is that you can get away without sacrificing speed.

Of course, the tradeoff is that you need more motors, which translates to more money, weight, space, etc…

As people have said here, you can use 775pros if you keep the stall voltage below ~4V. The other option is to use CIM-style motors, which can stall for longer at higher voltages without burning up. Using the data from Vex will help show how long and at what voltages you can stall each motor without burning it.

To calculate the stall voltages, you can use the mechanism tab on my design spreadsheet.

One video that I’ve found useful for explaining this is published by 1678.

As people have said here, you can use 775pros if you keep the stall voltage below ~4V. The other option is to use CIM-style motors, which can stall for longer at higher voltages without burning up.

Another advantage of going the 775 route is that if you can disconnect the motor(s) from the arm between matches, you can run them at free speed and cool them with their internal fans. (Versaplanetary V2’s make this really easy.) It’s not nearly as easy to get the heat out of the armature of a CIM quickly.

Another advantage of going the 775 route is that if you can disconnect the motor(s) from the arm between matches, you can run them at free speed and cool them with their internal fans.

Or just blast them with cold spray

One other thing that hasn’t been mentioned yet here: holding a mechanism in place is one of the instances where friction can be your friend! Obviously it makes your motors work harder when moving your mechanism, but if you intend to just hold position a large percentage of the time, you can find ways to add (static) friction that lets your motors take a rest. A brake is an extreme version of this, but there are “always-on” ways to achieve a similar effect. For example, high-reduction worm gears, or brake pads that are always lightly engaged.

The smarter solutions are usually a better way to go, but in a pinch - or if your particular application happens to fit the “most of the time it just sits there” profile - it’s worth considering.

Another option that isn’t always presented is to just throw more motors at the problem. Often, they won’t weigh much more than a counterbalance/spring mechanism and allow you to get away with more aggressive ratios, depending on your exact configuration.

I don’t know if it’s just me but the JVN calculator has probably made it harder to design for an arm that it did make it easier. it seemed to think that 16:1 on 2 cims was way more than enough for a 15 pound arm, even though in reality it required something like 150+:1

Lots of good ideas here, a well counter balanced arm can be driven with a relatively small load on a motor. Do the math and find a gas spring (shorter the better for fast movement), Surgical Tubing, or Springs to counter most of the load on the arm. If you counterbalance it properly a smaller motor like a BAG / window motor should be strong enough to move it.

A good combination is a well balanced arm + worm gear or break to keep your arm in place, having an arm that doesn’t take too much torque to move and will hold its position once you stop driving the arm is a great combination, it makes the controls way easier. Your options for this are: pneumatic break (using a bicycle break or something similar), custom worm gear gearbox, snow blower motor (has integrated worm gear gearbox).

You also have to understand some of the engineering. Take a closer look at the timing. At a 16:1 ratio you’ll have a propeller, not an arm.

To give you an example, we looked at an arm earlier with a 775 and it took nearly 600:1 to get the rotational speed where we were happy.

That sounds like user error with the tool more than the tool being misleading. Could you share your input specifications?

Do the math and find a gas spring (shorter the better for fast movement), Surgical Tubing, or Springs to counter most of the load on the arm

Gas springs are inherently “stately” (that is, slow). If they weren’t, the rules on them would be a lot more restrictive. But they can store a LOT of energy you can access once per match, like, oh, for the climb.

These are all really good ideas. We’ve done a few of them before (such as counterbalancing with surgical tubing). We had not thought of the disc brake - is there one in particular that teams like to use?

We’ve got a couple of mechanisms that can probably be parked in the vertical with a low voltage holding them in place, so that gives some team members something to test immediately. Thanks to everyone for the feedback - I’ll try to update where we are in a couple of days, but if there are any other suggestions please let me know.

Repeating what Andrew L said.
As high a reduction as you can stand to lower the stall current. Our arm is over 800:1 this year. A three stage versaplanetary is the only easy way to get there that I know. I do recommend the 775. The bag motor will overheat faster trying to hold a load because it has to have more voltage to to make the same torque. When a cooling fan is not running then the weight and surface area of the motor are what makes it last longer. So yes a massive CIM motor takes a while to heat up.

When using JVN design calc look at the speed to move 90 degrees and make that as slow as your comfortable with. If 90 degrees in 2 seconds is fast enough, then go that route. JVN will tell you the minimum gear ratio to move the load but that is the wrong design point.

775pros are fine when used correctly. However, if you’ve had trouble with them in the past, I would actually recommend a 1.2V stall (that is, about 13 amps load in JVN Calculator). This makes it very easy to control and hold position without overheating. On our arm, we are planning on using 2 775s to minimize heat. The Andymark Dual 57 Sport is a great choice for a multi-775 arm, especially when combined with a couple sprockets for more reduction.

We have counterbalanced arms using air cylinders with great success in the past. 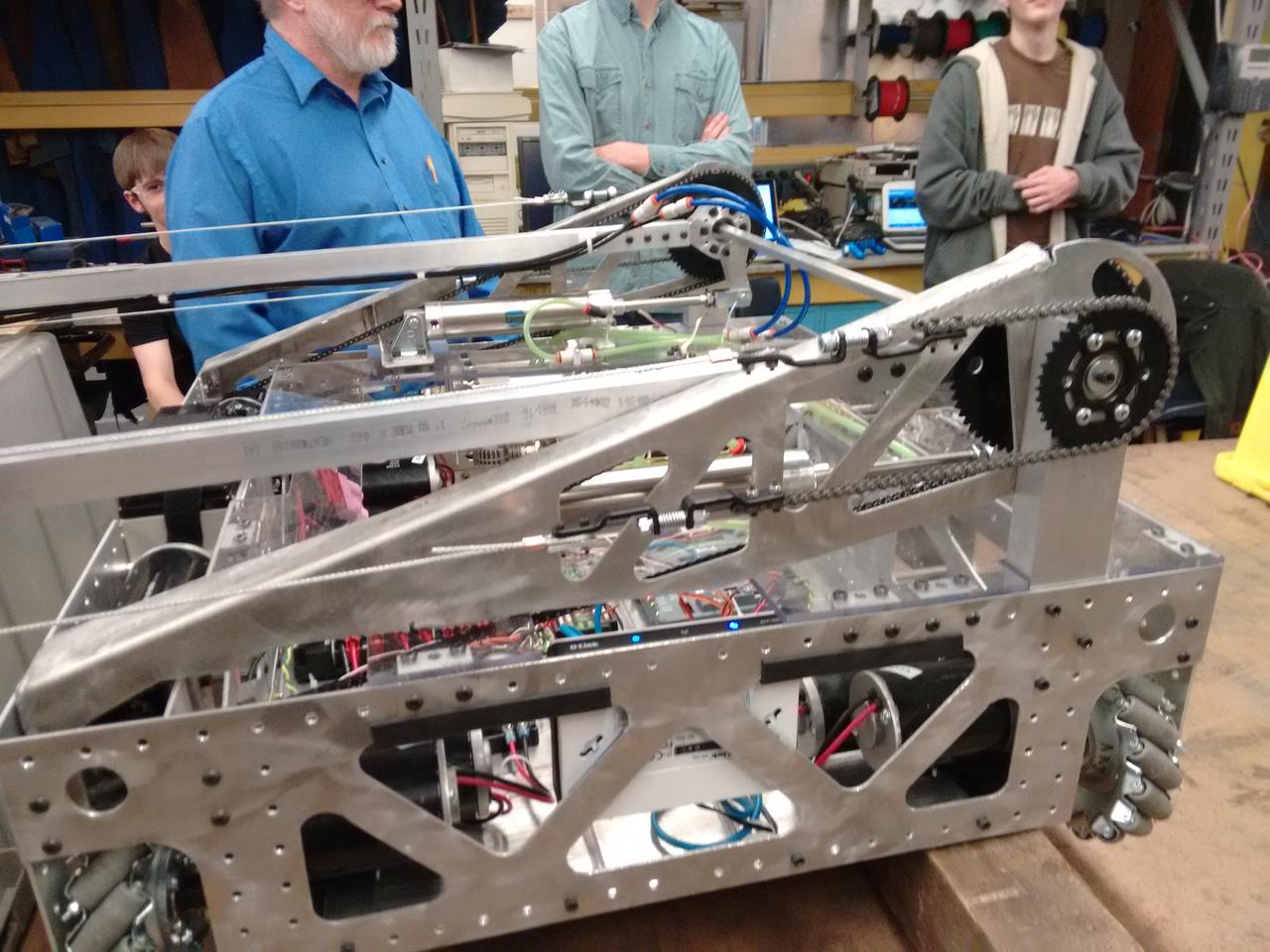 By adjusting pressure you can quickly dial in the right counter-balance force, the force is constant instead of displacement-dependent like many springs, and it tends to damp the arm’s motion, making position-holding easier. In the implementation pictured above we clocked the air cylinders’ mounts so they would always tend to bring the arm to perfectly vertical.

Very interesting thread. The documentation for the versa planetary gearboxes says that you shouldn’t use extreme gear ratios. I’d like to use a mini cim with something in the ballpark of 200:1 to move our arm. Is this a bad idea?