Our team wants to create a 2017 bot in order to learn a couple of things about building future robots. The thing I’m hiccuping a lot, is how did teams manage to positively control the fuel from their hoppers into their shooters. I’ve seen spindexers, and it look kinda difficult to pull off without CNC. Are there any other ways you know how to control the balls?

If you’ve got a 3D printer you can still prototype a spindexer and most likely a nice final product.

The biggest 3DP we have access to is 120mm^3. I’m pretty sure that’s not enough, but I may be wrong.

Our shooter, feeder, and bottom half of our hopper were all just over two balls wide. We had a very simple polycord belt for our feeder, and used gravity to funnel the balls from the top half of the hopper into the bottom half. We never had a single jam the entire season or off-season. 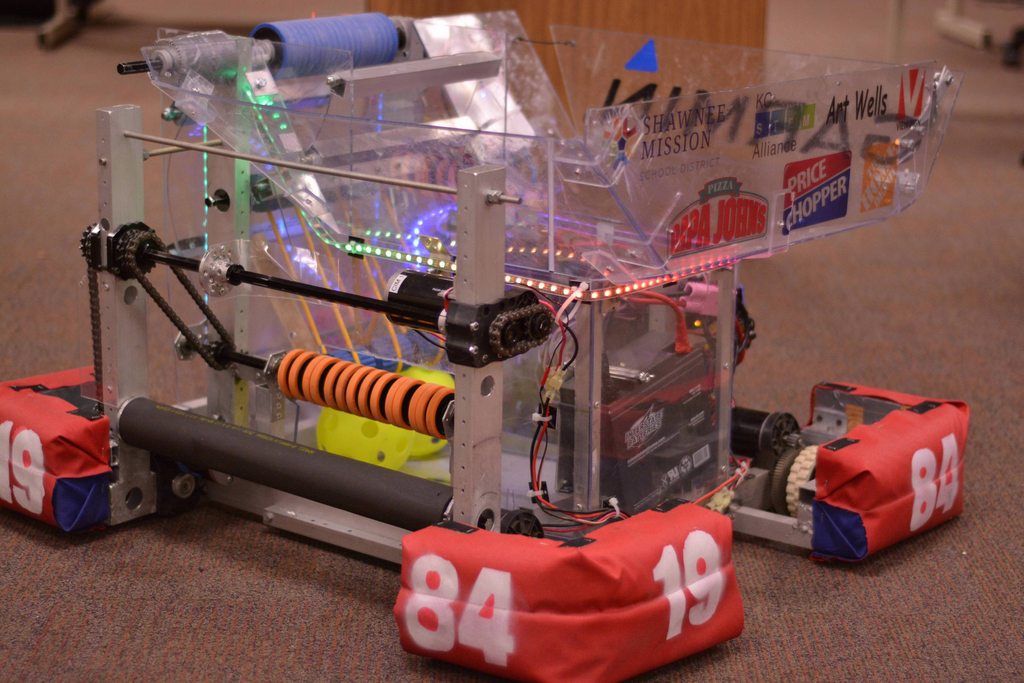 Thank you! You don’t potentially have a top down photo, do you? It seems like a simple and effective solution.

5402 used polycord belts on the final approach to the shooter, combined with a beater bar that used strips of tread to urge balls towards the belts. (I worked for AndyMark at the time, the leftover off-cuts of pebbletop were in the junk pile, we ran with it.)

Short form: Only power the parts you truly care about working. We ran an ungodly number of belts on that and still found dead spots. 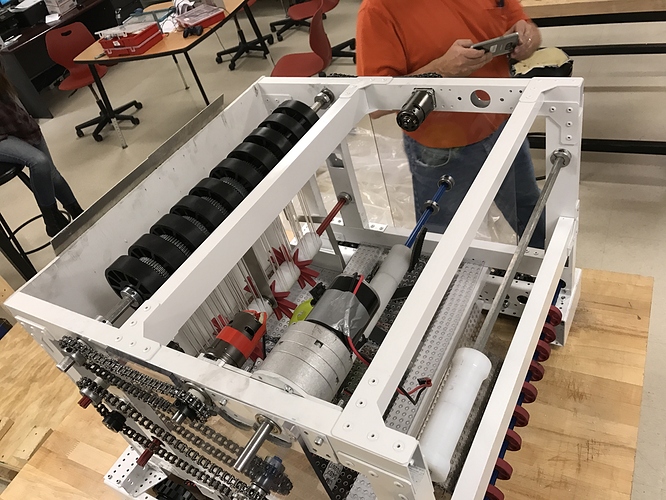 We had a piece of 1x1 angle iron bolted to the output shaft of a snowblower motor, and just ran that back and forth inside the hopper.

Unfortunately that’s the only picture I have access to at the moment, but I’ll poke around and see if i can find any more, or the CAD.

it look kinda difficult to pull off without CNC. Are there any other ways you know how to control the balls?

Never underestimate the power of the 2d cnc plotter you most likely have (ie printer), spray adhesive, and patience…

What part in particular are you concerned about making?

would only do gears, or if they’re making me do fuel hide the fuel until they stick to gears

Yep, Billfred hit the nail on the head. (OK, so I edited slightly…)

First thing you do is do some strategic analysis. A lot of teams misjudged the fuel in 2017–while it did have value as a tiebreaker on some occasions, you really didn’t see any benefit unless you had a 90th percentile shooter or better (or made it to Champs and paired with the robots that had that good of a shooter). A single Fuel was worth between 1/9 and 1 point depending on goal opening and time of match. A single Gear was worth (IIRC) up to 40 points depending on which geartrain it landed in–but you had to get all of the gears for a rotor to make it work.

If you’re doing Fuel shooting as an exercise in handling game pieces, that’s one thing… but if you’re trying to do this as a “season build” then you need to start with a game analysis.

Hint: for 2017, for 75% of the teams, the answer was or should have been “gears+climb, and we’ll add a low fuel on top if we think it’s necessary”. For another 15%, fuel was useful but a distraction later in the match. For the top 10%, fuel was essential.

What are your resources. It’s pretty surprising what you can do with a printer, patience, and a jigsaw

To clarify, we’ve built tons of stuff by first cadding it, then (depending on the part size) printing out small 1:1 sections of a larger piece and then taping the pieces together. We then tape (ideally we’d use spray adhesive but we weren’t allowed to) the piece of giant paper to a sheet of aluminum and then trace and cut everything out with a jigsaw. We’ve gotten really good results with this method. We’ve gotten correct c-c distances for belts and gears translated from paper to metal which is probably the most precision you’ll likely need

To add, we waterjet everything on our actual bot but all our prototypes were built this way. We could’ve used the jigsaw method but a waterjet resulted in more even finishes so that’s what we went with

It was possible to get a high feed rate from a simple hopper. Our 2017 hopper had no 3D printed or CNC parts. It was just a spinning floor plus a carefully shaped outlet tube. The geometry took some iteration, but we got 5 balls per second out of it. We were one of only a handful of teams that managed to solo 40 kPa in competition. 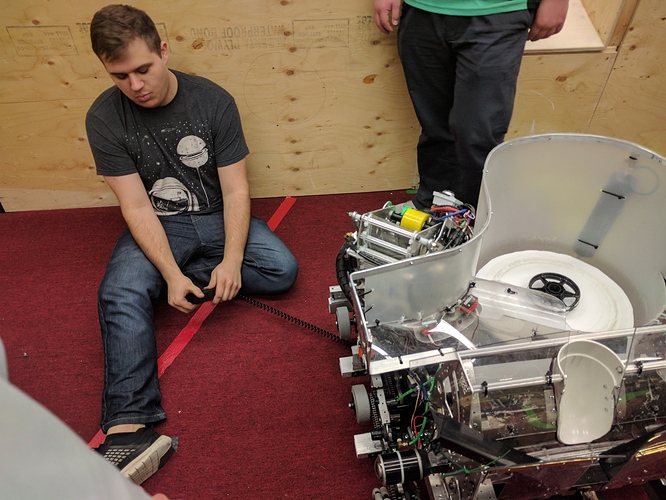 (despite that success, fuel was basically a complete waste. I’m still bitter).

A good shot of how the “spin dry” method works. Fun to watch too.

I also just wanted another excuse to rewatch this incredible reveal. Not that you ever need an excuse…

This is pretty cool! What material is the floor made out of?

We have a small 3DP, and a lathe. We have a variety of hand tools as well, basically anything you could ask for. I would like to try the piece together method as well, it just might work.

I completely agree with this analysis. We are more of doing this in order to help us manipulate balls; this was our first year doing it since 2012. Ever since we’ve just ignored them and done other tasks.

I often find myself off task and watching 118 Reveal videos… And whenever I’m trying to make a point to my students, or find an example of a certain mechanism, I just fumble through their videos until I find the example I’m looking for.
I understand it might be a bit unhealthy.

I think we ended up with currugated polyethylene (sign board) for weight reasons, but it could have been anything really.

238’s concept was similar (and I believe was either inspired by this prototype video or a similar one). I don’t think it was quite as effective as 5406’s but still worked pretty well. Most of our issues came from not maintaining powered control of the balls between the exit of this hopper and the shooter (they went up a small curved ramp using velocity from the hopper wheel instead of being fed by a wheel or belt), the hopper itself worked fairly well.

We used a single pneumatic wheel with a semicircular “track” at the base of the hopper (the hopper itself was just sloped polycarb to funnel down from the majority of the robot footprint to the semicircle). A stealth wheel stacked on top of the pneumatic wheel helped prevent balls from settling on the wheel itself. A 3rd quarter of the circle served as the hopper exit. The agitator axle was driven from below the floor of the hopper by a belt to a versaplanetary.

Because the sloped hopper surfaces were all polycarb I can’t find any pictures that show that geometry very well. Here are a few pictures of the indexer portion (note: the wood block does not belong in there, that is a crude sensor mount for the front of the robot that seems to have been set down in there temporarily.

Other than the bearing holes for the agitator axle, the manufacturing methods required for this were pretty crude. The circle itself is primarily defined by being the inscribed circle of the square frame around it. Overall, this method is not great and did require some cardboard/tape to shim some spots to get everything to behave right, but it did work and would require little more than hand tools to construct. You can somewhat see the cardboard and tape used to shim things to get the radius just right in this photo:
https://photos.google.com/u/1/share/AF1QipPCTijuhCNUiQQKHRDUUm5nxR5bC9Vo3bqbRkPM1KaqaveurUgR_9BLPLpkC19vUw/photo/AF1QipNXwH3VTdYWNSWOpL8GHNgWUdh0lhsCkIaQ7hcj?key=d3lPUnBIZlFLb1RNaTFHZDhyaDROdTBCWF9tYkR3