How do these 254 mechanisms work? (bearing retention)

How do the bearings in these three sections work? 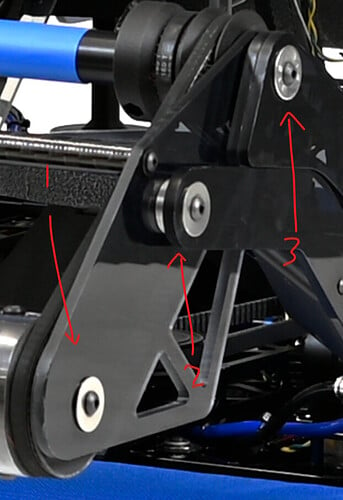 for those not aware, bearing 1 needs to support the a roller of the intake, bearing 2 acts as a joint in the linkage, and bearing three needs to do both.

The way my team would usually do something like this would be to put a bearing into the polycarb panels and then put a screw with a washer into both ends of whatever axle the bearing was supporting to stop the axle from being pullet out of the bearings. This does not seem to be what is happening in any of these arrangements though, as nothing can be seen below the large washers, suggesting they would have to be resting on the outer races of whatever bearings they were sitting on, which seems unlikely to be the case to me. Are screws themselves acting as the axles in this case with the bearings being in the actual rollers of the intake? As for bearing 2, i initially thought the metallic cylinder between the two arms of the linkage was a thrust bearing of some kind, but then i realized that if there was a screw with a large washer going through the entire stack, the two arms would not be rotationally isolated, since the screw would still be effectively connecting both sides despite the presence of the bearing.

Any insights would be much appreciated. Thanks in advance.

On our bot big washers are for keeping a hex shaft in place to avoid a snap ring.
They might have a bearing flange on the other side and that’s insuramce…

if there was a bearing underneath, wouldnt it be rubbing though?

im familiar with that technique, but usually when you do something like that the bearing is only going over the inner race of the bearing so everything is spinning together an friction is not an issue.

We use shoulder bolts to put polycarbonate pieces together, it’s a bolt and it does the work as a bearing. You don’t need a washer on the outside of the bolt head is big enough, and don’t tighten all the way since you have to keep it rotatable. It’s a similar concept I believe 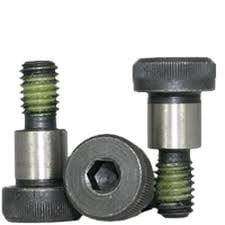 joint 2 is almost certainly bushings and not bearings. and you can tell because of the way it is, that 1 and 3 seem to be dead axels.
essentially there is just a rod that goes across the entire intake inside of the bar that doesn’t rotate, and they are just spinning the tubing around that bar by supporting it with bearings on either side and driving the pully which has a set screw into the tube. someone should really draw a diagram

@ngreen @Brittan thanks, it definitely looks like 1,3 are dead axles. That makes a lot of sense, I guess it’s how they are able to get away with just one standoff.

@Brittan I know this is asking a lot, but do you think you could sketch a section drawing of what you think the bushing arrangement looks like? I still can’t seem to understand how things would work since the screw they’re using doesnt appear to be a shoulder screw.

they are using lock nuts, so im going to guess they just tightened them until it was snug enough to not wobble back and forth, but loose enough to smoothly rotate. take a look at the inside of the intake on the other side of the picture.
Edit: on top of that I assume they are using a nylon washer between the poly plates to help them slip more easily.

Some good guesses in this thread, but no one is quite right.

Our robot has undergone multiple weightloss programs so a lot of this is ‘optimized’ to be a light/strong as possible. We are running PC directly on anodized aluminum as a “bushing” with a smidge of grease. All of the stubby dead axles allow us to fully clamp through the axle stack with a bolt. The only crossmembers between the side linkage sides are the 1/16"wall 3" diam front roller and the 1/32" wall 1" diam back roller. (full intake-width dead axles are too heavy//not weight efficient.) 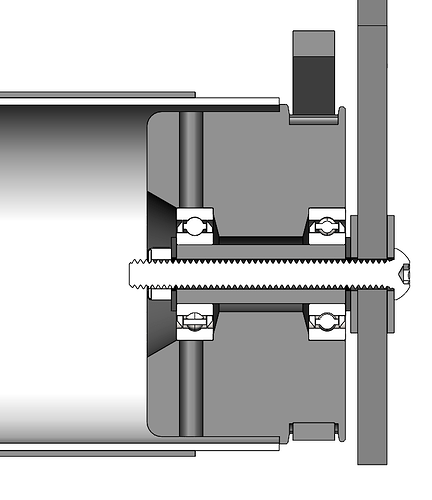 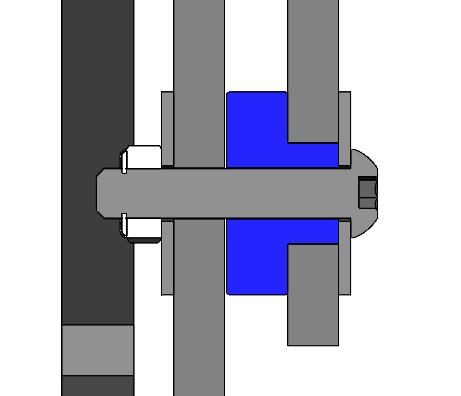 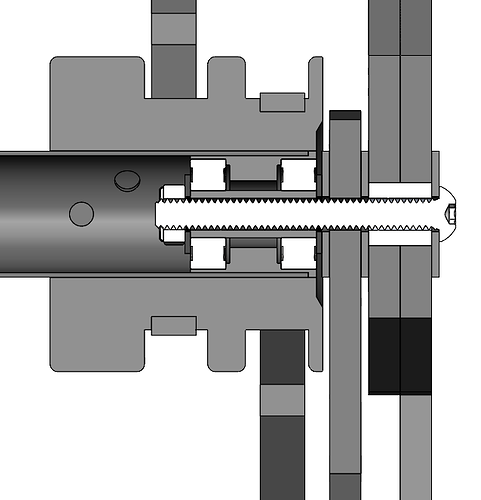 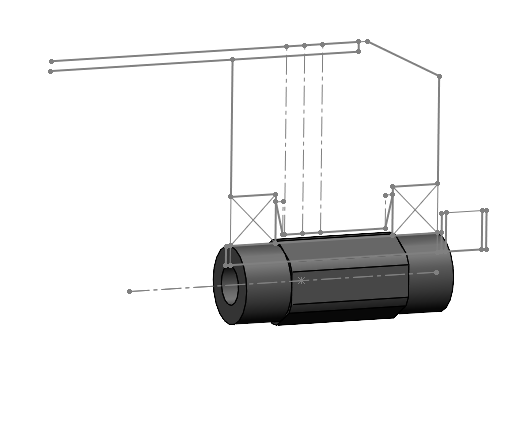 How are the locknuts inside of these tubes retained during roller assembly?

Looks like the bearing/bushing stack is assembled and nutted, then pushed into the ends of the rollers.

What would stop the tube from just popping off if the intake was hit hard enough?

I assume those holes in the tube or thru the midline are a hint to some set screw, pin or fastener they install later. Or some other feature, lots of possibilities to answer your thought.

Also, I’m sure a standoff tube or two elsewhere in the assembly keeps the two sides metered appropriately.

Oh, maybe I was being dense, I just realized the answer you were fishing for was super glue of course.

This is correct, you kind of need to invert the assembly paradigm. Hubs and dead axles are assembled onto the link, then the rollers are sandwiched by the links and radial screws are inserted.
The screenshot I attached didn’t include these so I’ve roughly sketched them in. 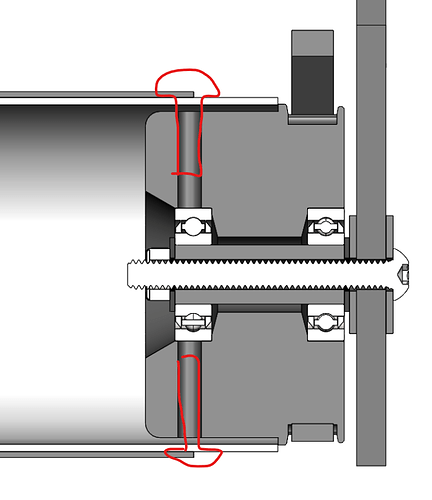