How does your team control your feeder

After seeing many teams’ wonderful performance in this season, l am curious about how does your team control your feeder to make it shoot smoothly (l mean when the shooter is ready to shoot ,the feeder will pass the ball immediately). Since when l intake balls , l can’t make sure that the two balls are contiguous. l guess that many teams have a blocker under their shooter to block the balls provisionally and when the shooter is ready to shoot, the blocker will open and pass the balls to the shooter.Besides, l guess that many teams may divide their ball path in two parts and control them seperately. That’s smart. However, if the robot only has a feeder with one motor to control it and the path of the ball is long, it seems that friction can’t be avoided if l want to make the two balls intaked contiguous. So, under this circumstance , is there any good method to control the feeder?

At least this season, balls index very easily and there is no need to overcomplicate indexing. Our feeder is just a belt system driven off a single motor. When the beam break at the front is tripped, the conveyor will move until the beam break is no longer tripped. This will hold two balls and the spacing between them is consistent but also irrelevant.

Since when l intake balls , l can’t make sure that the two balls are contiguous.

It doesn’t matter if the balls are touching. The cargo in 2022 aren’t power cells and nothing happens when the balls touch. The shooter will yoink the first ball out before the second ball gets anywhere close to the shooter wheel and just setting the conveyor to the correct speed will shoot out both balls with a consistent and reasonable amount of time between shots.

Do you only use a conveyor to control your ball path? Do you have another wheel below your shooter?

It seems that this method only suits the team with a short ball path.

This will hold two balls and the spacing between them is consistent but also irrelevant.

Do you only use a conveyor to control your ball path? Do you have another wheel below your shooter?

Nope. Only a single motor driving the conveyor including the wheels that feed the shooter.

It seems that this method only suits the team with a short ball path.

Why would it not work with a long ball path? The beam break at the front just advances the balls whenever one is added. It worked in 2020 with 5 powercells and there’s no reason it couldn’t scale as long as the indexer is big enough.

Why would it not work with a long ball path? The beam break at the front just advances the balls whenever one is added. It worked in 2020 with 5 powercells and there’s no reason it couldn’t scale as long as the indexer is big enough.

Does beam break means an IR sensor? l think l have got it but how can l switch between shooting one ball a time or shooting two balls a time? Does it depend on the operator?

The beambreak isn’t used to shoot, just to load the conveyor. To shoot, you just move the conveyor a specified distance.

So when the shooter is ready , l will move the conveyor and no matter how many balls it has now.

Yes. That will guarantee the conveyor will shoot all the balls present.

But ,if l am shooting while intaking, it seems that there is a conflict between them.

There is no reason to be shooting while intaking. If for some reason that is the case, the shooter takes priority.

But l think 1690 is shooting while intaking.

Most teams are not able to do what 1690 does. Shooting while moving is one of the hardest things possible in this game and is not worth considering for a vast majority of the teams. Their conveyor is also segmented to allow them to even do that in the first place.

I’m going to explain how my team does it. By no means do we do it the best but it’s what I can explain the best. 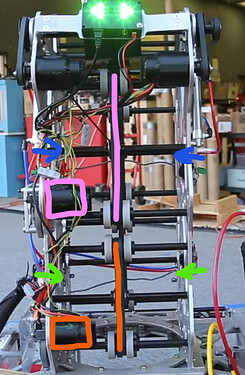 We have three states that the transfer can be in: shooting, intaking, and off.

Thanks for giving your solution. Can you give a side photo of your conveyor? Maybe this will help the understanding.

What is the limit switch? 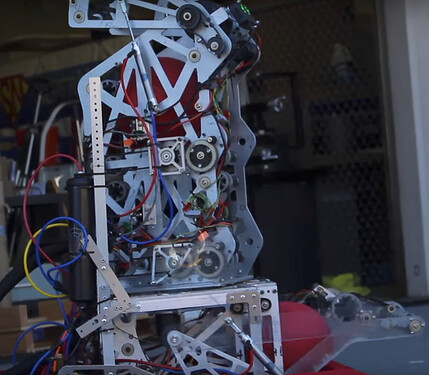 I took the image from our robot reveal, where you can also see the robot intaking and shooting: 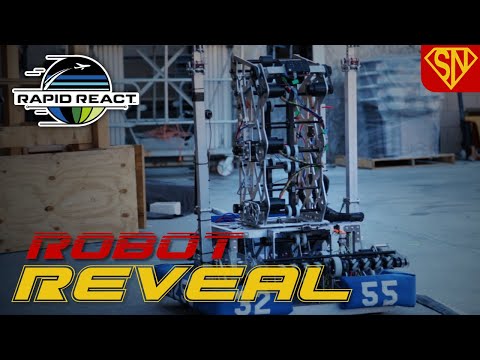 What is the limit switch?

Not 100% sure what you’re asking, but a limit switch is a mechanical proximity switch. I can’t find the exact model we used on our robot but they’re pretty similar to these.

Team 5675 used a very simple design this year to move cargo and get it into a position to shoot. It used gravity and a single motor. Our shooter was offset to one side of the robot so we had a very simple ramp to move the cargo to the correct side where it would then stage for the next action. The cargo would settle underneath what we term the “gate”. This was a single motor attached to a couple of compliant wheels highlighted in red in the picture. This would grab the cargo and move it slightly forward until it tripped a proximity sensor, not pictured, but where the yellow circle is. At this point, the cargo would stop until a button was pushed by our aux driver. When the button was pushed, the main flywheels at the top would spin up to the appropriate rpm, then the gate would push the first cargo up where it would hand off to the main flywheel that would pull it through the rest of the way. If we had a second cargo it would quickly follow the first one, as long as the button was held down.
Hope this helps and answers what you were asking. 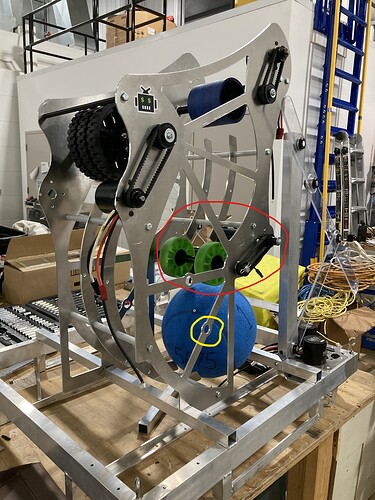 After experimenting with proximity and colour sensors (and never getting them quite right), our team ended up with a pretty simple sensorless feeding system using two motors (two motors made sense anyway since they had to spin in opposite directions): 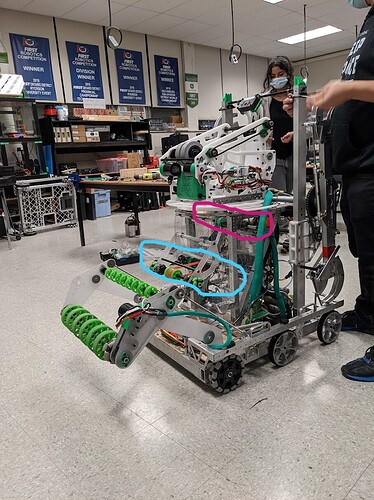 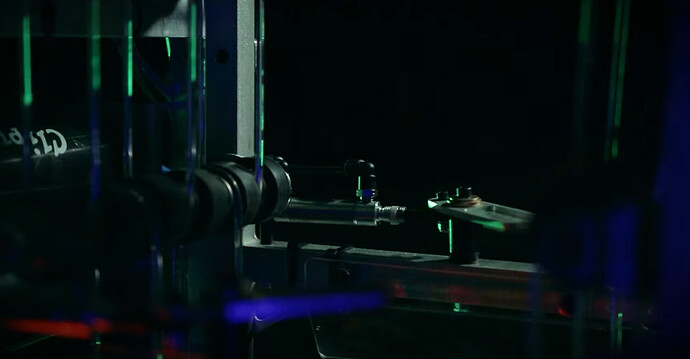 During shooting, the sensors retain the cargo until the flywheels have spun up, then both indexer motors are powered to feed the cargo (already properly spaced out by where they were stopped during intake) into the shooter. It’s a pretty straightforward system and works very well. Here’s the robot with the sections highlighted and two cargo in place and ready to shoot: 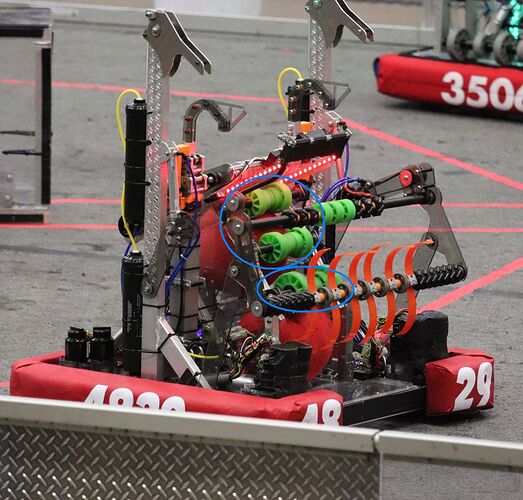 We used three beam break sensors and 1 color sensor, and the entire logic for color sorting is very much part of the feeder control, so I’ll include it.

The mechanism has three motors: intake, indexer, and magazine.

There is a beam break in the indexer mechanism over the color sensor and 2 in the cargo storage section where the balls should be. When a ball comes in (passes through the indexer beam break), its color is sampled. If the magazine is empty (both cargo storage beam breaks are not tripped), if the ball is the wrong color it is rejected through the shooter; if it is the right color it is pulled into the magazine until the first beam break is tripped.

If another ball comes in while the first beam break is tripped, if it is determined to be the wrong color it is rejected through the intake. If the ball is the right color, however, the magazine runs until the first ball reaches the top (which also brings the new ball into the lower magazine position).

If a third ball comes in, if it is the wrong color it is rejected through the intake. If it is the right color the indexer stops to allow us to hold it. This was important for if we ever needed to hold 3 balls, which we used for our 5-ball auto.

When it comes time to shoot, we aim the hood and turn to face the goal while reversing the magazine until the top beam break is clear. The moment it is clear, we spin up the shooter and then run the magazine forward at a fixed speed. The intake and indexer also run at full power during shooting to prevent jams and shoot any cargo stuck in the intake-indexer section.