How is our wrist looking?

I’m really curious to see what you are doing with all of those elevator stages.

We want to get more than high enough, so we can have decent stage overlap, and incase there are any problems at the top of the elevator travel, it wont be the end of the world.

Also I’m sure deep down there’s some part of me that wants to prove to the team we can have a good 3 stage elevator. Our 3 stage last year (built for regional 2 and worlds) was GREAT… when it worked. I’m talking 1.5 seconds to max height, great intake, etc. We had lots of issues with it at the regional and it really hurt team morale. We won the rookie all star award, since the judges said that carrying in a completely new elevator and intake is about the boldest think a rookie team ever did, and they didn’t even care it was temperamental. At worlds (also won rookie all star) it worked the entire match with no issues but none of our team watched the matches since they didn’t think the elevator would work.

So basically we are doing it half because we think its a good idea, and half to satisfy mine and a mentor’s ego

Unfortunately, that is fake news. I did get a good laugh out of that post when I woke up this morning however.

This looks a lot better, the reason most people don’t use hex shaft is because they prefer to use a larger tube thus making the setup more rigid. The choice of supplying power to the other side is not nessicary but definitely will help. For a small light arm this will work great

This dumb question will probably anger you… can we supply power to the other side with a hex shaft?

Yes you can that’s fine, most the load will go directly though the arm and the hex shaft will just help the non powered side not “lag behind” in the event that your arm isn’t very rigid.

What do you think about running a 1/8" sheet across the front of the who articulating tubes so that we don’t need to worry about one side lagging?

Would definitely serve the same purpose as the powered hex shaft, I’m sure there is a ton of great solutions, whatever is easiest for your team to make is definitely the best solution.

One more quick question… do you recommend we install a limit switch to zero the encoder?

I always recommend installing limit switches at both extremes of a device. They tend to be more reliable than encoders, and can help ensure your device doesn’t rip itself apart if the encoder drifts on you. Also, for arms with a limited range of motion like this, I actually prefer potentiometers over encoders.

Would that be like using one of the string potentiometer? Would it also take the place of limit switches, or would that still be a good idea as well?

I second the pots, but our robot is being CADed by about 1.3 people so any COTS implementation we can do, we must.

No, I wouldn’t use a string pot here. I’d connect the pot directly to the end of the shaft, using surgical tubing to couple the two together (to account for any misalignment in the mounting of the pot).

The srx mag encoder in absolute mode is always our sensor of choice. This enables you to always know the position of your arm and never have to re zero.

Interesting! I’ll have to look into this. Never thought about using something like that. Do you know of any examples we could check out to get a better idea of how this works?

This is actually an encoder, but it’s the same system, as this encoder has the same mounting as a pot. 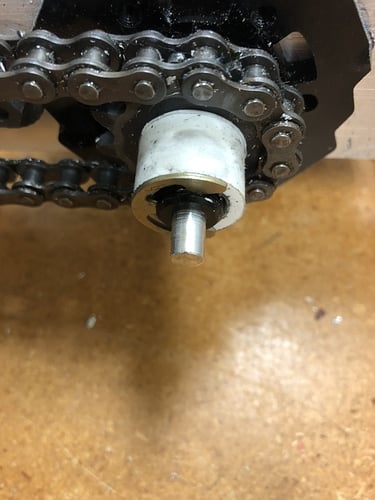 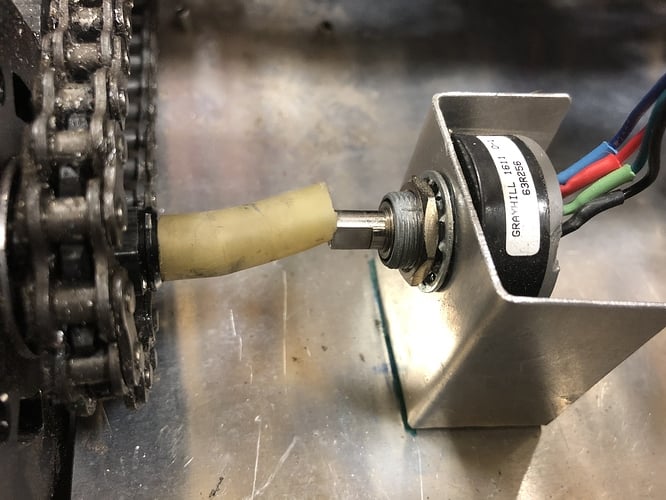 I guess I just imagined that the surgical tubing would have too much give or flex and would twist instead of directly transferring the motion to the pot.

Fuel line (like you would buy for a lawn mower) works great with low torque, medium speed, potentially mis-aligned shaft positional information. The black fiberglass “crosshatch” kind works well, I have not tested the red-ish rubber only kind.

From experience I would recommend it over surgical tubing (especially if your pot has some drag). however YMMV. Shorter runs of thick-wall surgical tubing probably work great.

What is the hub at the end accomplishing? Is it just meant to also help transfer a little bit of torque? Would it be flipped on the real design?

Also be mindful of how you will assemble it. If a gear tooth breaks on the big gear - how would you replace it? Can you access all the bolts to loosen, take out, replace the gear, replace the bolts, and tighten them?

I also highly recommend limit switches. We had just a software control on our intake in 2017. It worked great until it didn’t. And it didn’t work at worlds and cost us to very ineffective in several matches in a relatively weak division while we tried to figure out how to install limit switches.

I would add something across the two plates like 1/16 L channel to keep the plates the same distance apart, while its not required it will definitly help keep everything in place