How much use do you get out of a belt/disc sander, bench grinder, and portable grinder?

As would I since we don’t have a plasma cutter, but cleaning up, say, the end of 2x1 box cut on the bandsaw takes maybe a minute.

It takes us quite a bit of time to file 8020 (we do not do any soldering or plasma cutting). So the draw of a tool that can easily and safely speed that up is tempting.

Disassembling a mechanism to cut it down, cutting it, finishing it, and reassembling can take us a few days. The draw of being able to move a piece and then cut off the excess without disassembly is difficult to resist.

Not too long, but a deburring tool is even quicker! I got the first one from a FIRST Choice coupon, but many hardware stores and home centers stock them in the plumbing department, near the pipe/tubing cutting tools. After a few swipes with one of these, you just have to take down the outside corners with a file. When I haven’t had a deburring tool, I’ve certainly been known to use the Swiss Army knife I keep in my left front pocket to deburr aluminum cuts! (It’s been six days! My most recent deburr was on the aluminum bracket I made to mount a wireless-reporting rain gauge at my mother’s house.)

And +3000 that you don’t use a stone grinder on aluminum! 3946 was lucky for a few weeks before I learned that grinding stones could explode. Curiously, I already know granite could explode, having taken the Stone Mountain, GA tour while in high school. There are thousands of lightning-blasted “divots” near the peak, and the effect was used to carve most of the bas relief using (IIRC) oxy-acetylene torches of four different sizes.

Yes. Deburring tools are excellent. We use them a lot. However, cut 8020 has many surfaces that need to be tamed. Even with a deburring tool, it can take a bit of time.

8020 has many surfaces that need to be tamed.

3946 used 8020 their first year (2012). (I wasn’t officially a mentor, but my son @gixxy was the founder, and I spent more and more time at the build as the season went on.) After the Swiss Cheesing of 2012 bag night, we swore it off on competition robots - the only place we used it after was on the early versions of the air cannon. On those early versions of the air cannon, we had definite problems turning. Seriously, that stuff is evil when it comes to making weight.

Yes, also right angles are not always easy. Thus far, we have never had difficulty making weight (but extended elevators significantly change the center of gravity).

Elevators are actually the main thing we use 80/20 for. We’ve switched to using box tube for frames since we got our welder, but there’s a lot to be said for the compactness of 80/20 elevators using HDPE glide blocks. I know we’re in the minority on this as a lot of teams prefer other methods, but it sure has worked well for us the past couple of seasons.

Yes. We have found little else than can move so smoothly with just a few pieces. We have not gotten it working on a full robot, but we had a prototype for a three stage climber arm in a 3" x 3" square footprint. We went with a different design, but it was an incredible feat.

Our 2020/2021 climber arm is an 80/20 elevator with a 4"x1" footprint. It’s set up as a cascade to deliver the climbing hook, which means it’s variable in height from lowest to highest switch position. Here’s what it looks like extended (it’s black because we went with the black anodized version to match the overall color scheme): 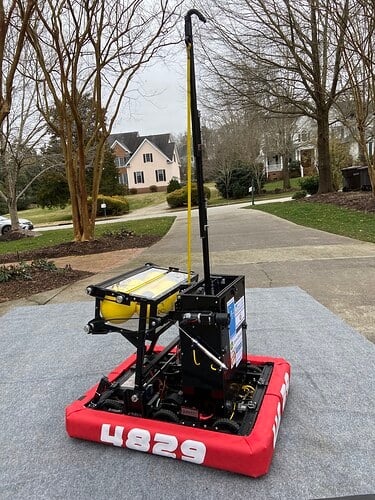 That is a beautiful bot. I love that climber.

Interesting design. We’ve also pretty much sworn off 80-20. We went with a nested tube design, which, while compact at 2x2, was a bit fiddly to make work smoothly. Oh, did I say “fiddly”, I meant “gave us many opportunities to iterate our design details” 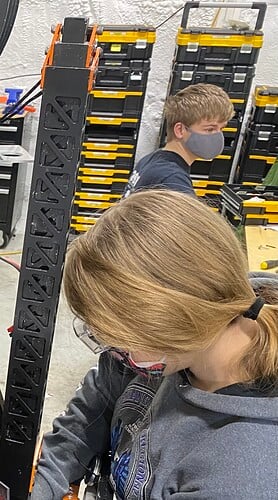 Our storage space is limited too, but we need to put everything in storage each night. So, we are building a small (~4 foot) super pit style workbench to help with small off-season projects and are considering creating one leg of an 8 foot section super pit (hopefully with an aluminum frame) for the full robot fabrication days.

What we’ve done is put everything on wheels, so that it’s really easy to tuck it all away. Almost all of our things we access regularly go on an amazonbasics rack with wheels on it (always have everything essential stored in 2 dimensions, so you dont have to worry about depth when finding things), and it’s worked out great so far (I still need to eventually write up a post about our system).

That is a wonderful idea. We just purchased a Home Depot version of said rack. That is one of our ideas as well. I also just created a prototype of a rack for our Harbor Freight boxes. It too will be on wheels. I wonder if the 4 foot bench combined with these other solutions may be sufficient. The full super pit takes up a lot of floor space and will be expensive in both money and time (albeit probably worth it in the long-run).

We use all three. I can’t say which gets the most use, but the belt/disc sander is typically high on the use list. Bench grinder is mainly used for weld tips as I recall. Portable is used rarely unless we’re using it for weld prep and I don’t notice.

That’s the thing about using the 80/20 and glide blocks for a cascade elevator, it’s not fiddly at all. It’s incredibly reliable and works smoothly and evenly right off the bat. We found this out with our 2019 elevator, which was a much larger cascade to lift our hatch mechanism to the upper two levels of the rockets. We found that using gravity to return the elevator to the down position works really well with the slightly heavier 80/20, given that the glide blocks have very little chance of binding, even when under some lateral stress. It makes for a remarkably straight arm (you can see in the picture that there’s no deflection even at full extension) that can still drop out from under the hook reliably when it’s deployed on the switch. I get why the nested tube design is popular, but it does take a lot more to make it reliable and smooth in operation.

The other advantage of our 80/20 elevator for the 2020/2021 season it that in the down position it fits entirely within the electronics box of the robot and thus fits under the control panel. That’s why it’s a four-stage version, so that it can collapse so far down. We made the entire robot to be as low and fast as possible while still being able to climb reliably (and at any switch position), so that was a critical consideration.

Back to OP, the amount of use of each one really has been variable over the years. If you’re only getting one, definitely the portable - there are situations (especially involving short timelines) where nothing else will get the job done. After that, it’s going to be dependent on what you’re grinding as much as anything else. Smooth and shape a lot of aluminum and/or wood? Gotta be the belt/disc sander. Sharpen steel tools, but don’t grind aluminum or sand wood so much? Bench grinder.

Our belt sander is used very often, basically anything that gets cut by hand or if we forget to fillet something in CAD.

The bench grinder is mostly used for cut off bolts or steel shafts, which is rarely.

We have never owned a portable grinder and have never missed it, we use a 12v portable reciprocating saw to do most the tasks people are seem to use an angle grinder for.

I used an angle grinder to cut the shaft on a Neo motor to fit into a VersaPlanetary CIM adapter. I occasionally use a bench grinder to renew rounded out hex keys, but that can also be done on a belt sander.

I’m not sure what you have in the way of saws, but a good miter saw and bandsaw and good blades are often nice things to have.

We have a good miter saw. Our bandsaw broke, but we have access to use one in the building for now. We may replace it, but it is not a priority (as we are not allowed to use one at events) :).

Why are you not allowed to use a band saw at events? We’ve had a small one on our pit bench for 5 years now.