How often does the match scheduler make you play a team twice during qualifiers?

At PNW SunDome, we played against 1595 three times in a row for our last 3 qualification matches.

This year this has been a bigger issue for us than before. For example, in Wilsonville we played against the #1 seed three times out of twelve qualification matches.

Wow- that opens my eyes a lot. So- definitely the hardest fun your students ever had!

One thing Mark (FTA) said to me yesterday which is a good point.
You’re only with two robots, but against 3 others. Thats why you see more common repeats against you than with you.

At our latest event we played against 1359 in our first three matches, against 1425 in the next two, and with 1425 in the sixth. With each team there are both more unique robots and more unique schedules, each of which have a chance of housing repeats.

how often does that happen in match scheduling?

Very dependent on team count and matches/team. I evaluated schedules for all 2018 events here. The St Louis event last year had 49 teams and 10 matches per team, so pretty similar to Iowa 2019. At that event there were 66 team instances (33 pairs) of playing the same opponent twice, and 2 team instances (1 pair) of playing an opponent 3 times. No duplicated partners though. So roughly for that sized event and 10 matches per team every team can expect to have about 1 duplicate opponent and no duplicate partners or the same opponent thrice. 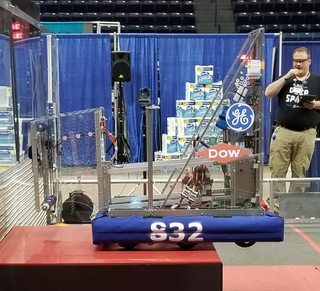 Mathematically, this is just a slightly more complex version of the Birthday Problem. If there are N students in a probability classroom, how likely is it that two of them have the same birthday?

I first saw the problem in a old issue of Scientific American that my grandfather had saved, and was amazed to read that the probability reaches 50% when the class size is 23. I saw the problem again several years later as an engineering student at Georgia Tech, in a class called Intro. to Probability. An easy google search will lead to the answer today; my class back then had to struggle with it as a homework exercise. I remembered the SA article but still had to work out the details like everyone else.

Just as in the Birthday Problem, a larger number of FRC teams competing at the same event will each have a smaller chance of seeing the same team in more than one match.

At the West Michigan district event last weekend (39 teams), my team saw 107 as an opponent in two consecutive matches on Friday, and then again as a partner in one more match on Saturday. Those three matches resulted in one win, one tie and one loss for us, and in two wins and one tie for them. They ended up seeding second, and we seeded third.

Is there any significance to the above? Nope. It is just math.

This is an interesting situation because a 24 team event with 12 matches can pretty accurately contain what the scheduling algorithm is made to subvert: an actual round-robin. The match scheduler is meant to give teams a “round-robin” experience in fairness but without having to schedule an impossibly high number of matches. With such a small number of teams, the schedule may as well be a round robin.

A round robin doesn’t really exists with randomly assigned 3v3 alliances, unless you consider every possible combination of teams a distinct competitor. In that case, there’s something like 10,000 possible alliances in that 24 team field.

Rant time. 2702 played FOUR THREE matches agaist 2056 at waterloo and ZERO with. we also had no matches with the #1-3 seeds, including our local friends 3683 (tbh i was more miffed about that) as well as the number five and eleven seeds. We’ve all had rough schedules, but this was a doozie…

In quals you played against them three times. In a 32 team event playing against someone three times is expected. That it was against 2056 is unfortunate for 2702.

Last year at the Miami Valley regional we had 1 match with Team 48 and 4 against. It was a big oof

The new match making algorithm isn’t perfect, but it’s certainly a lot better than it was back in the day. I remember in 2007 at the Pacific Northwest Regional we played against 2071 in all 8 of our qualification matches…

We were unlucky enough to get 4 matches against 2056 (arguably the best Canadian team) and none with them in qualifiers. We still managed to do well at the competition but it can sometimes feel unfair. What we found is that other teams with good scouting will still recognize your robots potential no matter how many bad placements you get. There were also a handful of teams that we never got to play with such as 3683 and 1241. In my opinion FIRST should look into better schedule making methods based on teams previous robot performances and attempting to make teams play against and with as many different teams as possible.

In case you weren’t aware, the scheduling algorithm explicitly tries to minimize repeats of this nature. However, it is also trying to meet a bunch of other criteria – time between your successive matches, how often are you red vs blue, which alliance station are you in, and so forth. So it is I think more complicated than just a slightly more complex than the b-day paradox. If someone has time to spend, one could actually run statistical analysis over qualification match schedules and produce some pretty graphs that relate number of teams, number of matches and number of/max number/average of repeat partners and opponents.

So in our last tournament in CHS, Team 1731 played against the same team in three consecutive matches. That is the only time I recall that happening. The worst part about it, was it was a defensive bot keyed on defending us, by the time those three matches were concluded, both bots had taken tremendous damage…haha.

We were unlucky enough to get 4 matches against 2056

Let’s not over exaggerate, we only played against them 3 times in quals. And one of those matches could have gone either way.

But yes, this was probably one of our roughest schedules to date.

I would still rather have this issue than the issue of too many matches close together. I appreciate the difficulty of getting all of this straight, but in our week 1 tournament at Haymarket, we had 3 matches within something like 8 matches, then another match involving us was replayed immediately after the middle match, so we had 4 matches within 8, with two back-back. Our bot is not quite that hardy. Always happens to somebody…just another challenge to face I guess.