How often does the match scheduler make you play a team twice during qualifiers?

A round robin doesn’t really exists with randomly assigned 3v3 alliances, unless you consider every possible combination of teams a distinct competitor. In that case, there’s something like 10,000 possible alliances in that 24 team field.

Rant time. 2702 played FOUR THREE matches agaist 2056 at waterloo and ZERO with. we also had no matches with the #1-3 seeds, including our local friends 3683 (tbh i was more miffed about that) as well as the number five and eleven seeds. We’ve all had rough schedules, but this was a doozie…

In quals you played against them three times. In a 32 team event playing against someone three times is expected. That it was against 2056 is unfortunate for 2702.

Last year at the Miami Valley regional we had 1 match with Team 48 and 4 against. It was a big oof

The new match making algorithm isn’t perfect, but it’s certainly a lot better than it was back in the day. I remember in 2007 at the Pacific Northwest Regional we played against 2071 in all 8 of our qualification matches…

We were unlucky enough to get 4 matches against 2056 (arguably the best Canadian team) and none with them in qualifiers. We still managed to do well at the competition but it can sometimes feel unfair. What we found is that other teams with good scouting will still recognize your robots potential no matter how many bad placements you get. There were also a handful of teams that we never got to play with such as 3683 and 1241. In my opinion FIRST should look into better schedule making methods based on teams previous robot performances and attempting to make teams play against and with as many different teams as possible.

In case you weren’t aware, the scheduling algorithm explicitly tries to minimize repeats of this nature. However, it is also trying to meet a bunch of other criteria – time between your successive matches, how often are you red vs blue, which alliance station are you in, and so forth. So it is I think more complicated than just a slightly more complex than the b-day paradox. If someone has time to spend, one could actually run statistical analysis over qualification match schedules and produce some pretty graphs that relate number of teams, number of matches and number of/max number/average of repeat partners and opponents.

So in our last tournament in CHS, Team 1731 played against the same team in three consecutive matches. That is the only time I recall that happening. The worst part about it, was it was a defensive bot keyed on defending us, by the time those three matches were concluded, both bots had taken tremendous damage…haha.

We were unlucky enough to get 4 matches against 2056

Let’s not over exaggerate, we only played against them 3 times in quals. And one of those matches could have gone either way.

But yes, this was probably one of our roughest schedules to date.

I would still rather have this issue than the issue of too many matches close together. I appreciate the difficulty of getting all of this straight, but in our week 1 tournament at Haymarket, we had 3 matches within something like 8 matches, then another match involving us was replayed immediately after the middle match, so we had 4 matches within 8, with two back-back. Our bot is not quite that hardy. Always happens to somebody…just another challenge to face I guess.

We remember the bad times easier and more vividly than the good, researchers report in Current Directions in Psychological Science.

I knew there was a reason for this thread, and why I remember having 11 at the blackjack table and the person in front of me played incorrectly and took my face card…

Also at Seneca, 365 played against 272 three times in a row during quals and zero times with them.

Hope to finally get a chance to play WITH 1640 at Bensalem this weekend!

we played against 4003 three times this weekend, but never with them…
5448 was also on our schedule 3 times

Shows me right for not checking my facts

. But it’s clear the matchmaking algorithm needs some work. While it’s disappointing that we didn’t get to play with some of the best teams at the event, it’s unacceptable that we played against any team three times, and with none. Cheezy arena manages this by using pre-randomized schedules, but that reduces the random ‘fairness’ of the current system

At the Finger Lakes Regional, our team (340) played against team 3838 two or three times and with them once.

If someone has time to spend, one could actually run statistical analysis over qualification match schedules and produce some pretty graphs that relate number of teams, number of matches and number of/max number/average of repeat partners and opponents. 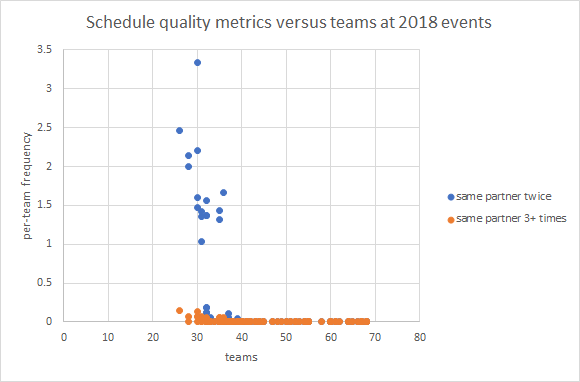 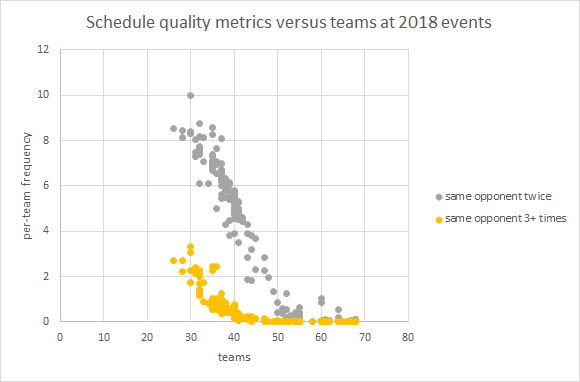 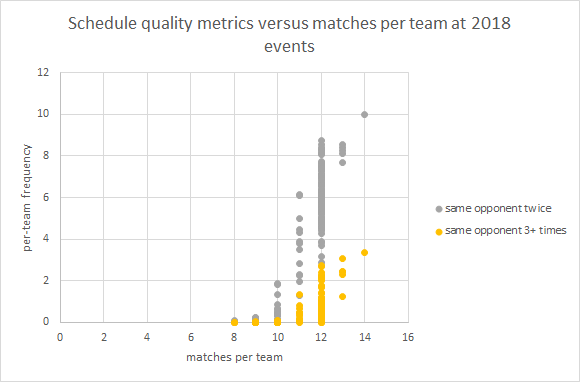 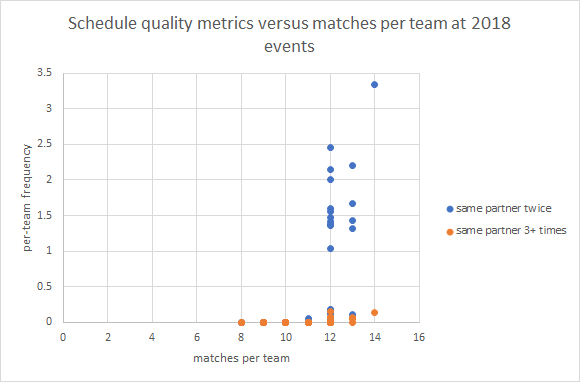 Let me give an example for how to interpret these. Looking at the second graph, we see opponent duplication frequency versus number of teams. So say you attend a 30 team event, you can expect on average to see about 8-10 teams as a duplicated opponent, and another 2-3 teams as an opponent you see 3+ times as an opponent. If you bump up to a 40 team event, you can expect about 4-6 teams that you see as a duplicated opponent, and 0-1 teams that you see as an opponent 3+ times. Interesting to me that there seems to be such a sharp cutoff on duplicated partners at around 36 teams, maybe this is due to the round uniformity getting freed up a bit to balance things when the rounds are >6 matches.

Also go look at this incredibly recent thread on a very similar topic: How is matchmaking done at competitions? (Kind of a rant)