How to Built A Robot that Doesn't tip (FIRST History)

I defy anyone to build a bot that can lift the 2X ball up into the air and cap the stationary goal that is not vunerable to being knocked over, seriously - it cant be done

This quote started me thinking (not always a good thing), and I realized that it’s been quite a while since FIRST has had a game that required teams to go up high. Last year, there were a few stackers who used the whole 5 feet limit, and a few people with arms, but for the most part, everyone was low to the ground. In 2002, the goals were fairly small, and people didn’t really need to get tall. 2001, there was no contact. So, I’d say that 2000 was the last time a robot really needed to get tall to score. Any students then would have graduated by now. Before then, robots had to expand every single year, so there was some knowledge that could be passed on and evolve, which may not have happened this year.

So, I thought this might be a good place for FIRST vetrans to post how robots in the past expanded and kept from tipping, even when hit. Specific robots would be great. Please include robots that used things that were made illegal in previous years, because that might start someone thinking.

Here are a few I can think of:

67 - 2004. http://www.chiefdelphi.com/forums/pictures.php?action=single&picid=7782
Wedge shaped base so that any robots hitting them would ride up instead of hitting them dead on. Very low and long base.

25 - 2000. http://firstrobotics.net/00gallery/pages/025-1_jpg.htm
The epitome of a long arm. They were very prone to tipping when used in the open field, but in the finals, they would latch securely onto the bar before deploying the arm.

330 - 1999. http://www.frazmtn.com/~rsteele/beachbot99/beachbot.jpg
Before lifting their basket, they always raised their wheels off the ground, so their entire base was resting on the puck. Also, a very low base.

I guess the obvious and generic rule would be keep the bulk of your mass as low to the ground and as centered as possible. In 2000, team 38 had a big boxy robot, which when tucked in, was very solid, almost impossible to tip. Unfortunately, the big boxy part extended out to latch on to the pull up bar. It was hard not to pop wheelies driving with the boxy part out, which made it very difficult to collect balls.

In 2001 and 2002, we kept very low to the ground (both robots were well under 2’ tall, while filling the whole 30x36" footprint horizontally), which of course, meant supreme stability against tipping.

For the stacking last year, we had a forklift. Problem was, the mechanism for the arms was very heavy, and had to go pretty high up to stack. Combine that with relatively big pneumatic treadless tires, and we bounced more than we turned. We got knocked over so many times that year, sometimes with amusing results.

This year, we tried to keep our center of gravity as low as possible, and met with pretty good success. Through both the UTC regional and Nationals, we were never flipped. I think the low and even placement of our drive gearbox, and centralized position of our ball collector kept our tires firmly on the ground, despite the van door motor sitting high above driving our 2x ball grabber.

With their turreted arm they could right themselves from any orientation.

For our 2003 stacker we built the base with a height of only about 7" and it weighed in at 120lbs. The top end was all thinwalled tubing with a absolute minimum up high (Although looking at it now, we could have mounted the windows motors on the bottom of the chains to lower the weight just a bit more) It proved very hard to tip for a 5’ tall stacker (Over only 1 time) that was borderline out of control for the full 2 minutes. If you have to go tall, use VERY light materials the higher you go. Sure, it got bent a few times but it was also fairly easy to bend it back to square. Most of the robots can’t hit really hard at 5’ like they can at 6". 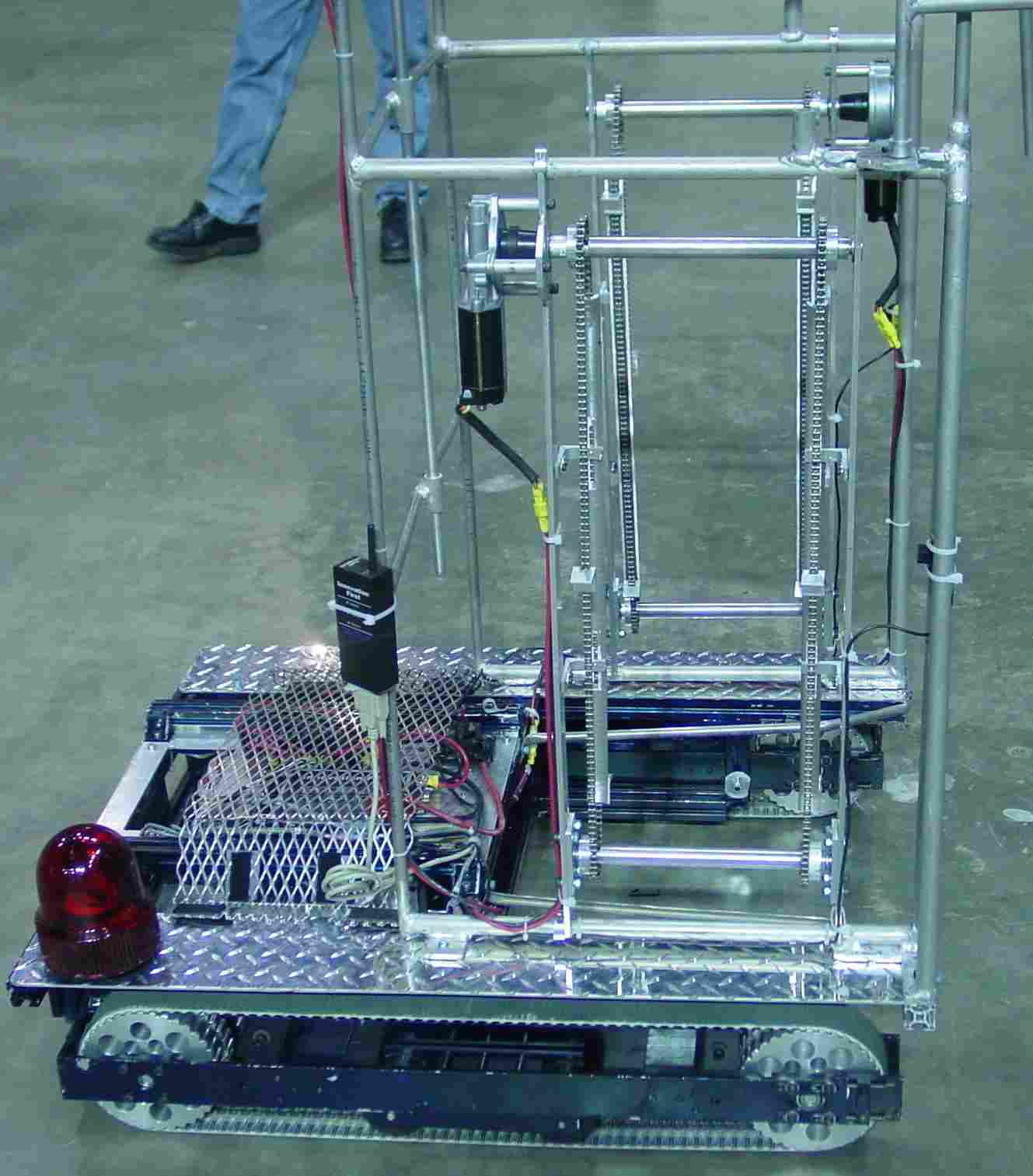 Weight distribution is key as well. Figure out how you’re most likely to tip. In this year’s competition for example, many robots would be prone to tipping backwards driving up the 6" steps. As was the case with our robot; in fact, in Pittsburgh, it fell backwards on its own without anyone else pushing it. How did we fix it? Moved the battery from the back of the bot, to the front

But certainly; general rule of thumb is keep the centre of gravity as low as possible. And if you have to raise that centre of gravity to complete a task (i.e. capping a goal) try to use as lightweight materials as possible… and above all, have a gentle hand on the joystick… jerky movements will just make the robot more prone to popping wheelies.

And finally… I think above all, the best protection against falling backwards is having an excellent driver. To know when you’re crossing the line with the robot and how to quickly recover if the robot starts to tip.

Kudos to our driver who managed to keep our robot vertical for this round:
http://vgamp.com/storage/783_horizontal_robot.rm

From 17 inches to 9 feet. this robot only flipped once and that was becuase the driver went over a ball. we did a lot of hitting even when the arm was all the way up.

watch this video, and you will be like WOW

watch this video, and you will be like WOW

25 - 2000. http://firstrobotics.net/00gallery/pages/025-1_jpg.htm
The epitome of a long arm. They were very prone to tipping when used in the open field, but in the finals, they would latch securely onto the bar before deploying the arm.

so prone that it never acctually tipped, once that i can think of where we tipped, was another team latched onto our boom and it was either fall or lose the arm

Sparky 4.0 (team 384) in last years game could self right itself in a matter of seconds

http://www.sparky384.com/albums/album18/arc_qf2m2.wmv in fact, there’s the video on our last quarterfinal last year ;D

We’ve had a fairly tall robot the last couple years coming close to the 5’ each year. Last year we tipped twice but could have went more but had a great driver. We had a beveled front that made it near impossible to go over forward but or weakness was backwards when on the ramp.

This year we tipped a couple times at regionals backwards but added anti-tipping poles on the back which worked great except we snapped them and tipped once we the opposing robot ran into us autonomously and then turned while going forward while under us. This broke the poles and sent us over. But other than that they worked great.

A solid base, where most of thie weight is centered works great. This year we had a 4.5 foot mast made out of the 2x4 alluminum…with another piece that long of smaller dimmensions going off that. We had absolutely no problems with tipping because of our base.

Our robot had a very low center of gravity with a 6 wheel, tank drive, drive train. At SPBLI, it managed to slip off the platform, twice, managing to get back up on one wheel. The only problem we faced was when our elevator was up, along with the arms. It had a tendency of falling backwards if both of those things happened and we were trying to get up on top of the platform or if we backed up to far while we were already on it. But it was able to right itself from the front and back. So yes, if the majority of it’s weight is built near the floor, it makes for a very stable bot.

We were designed to be able to get back up, but only if we fell on or backs (which is what usually happened). When we got up from our side though, THAT was unbeleivable!

We have a wheelie bar on the front (we climb the stair backwards) and arms that come out ont he sides that also function as kickstands so we can’t tip sideways. We can tip backwards but we aren’t climbing the stair that way and the wheelie bar is also a bumper so people can’t get underneath us when we engage.

even if you build your bot with a low CG and centered properly, it is still possible to tip, but as mentioned before, its always an amazing crowd please when you are able to right yourself, or even better (heh) get your teammate to. Im not sure if the SOAP footage is the best for this, but check our Archimedes field QF 2.1, wildstang somehow tipped over, and their coach immediately told us to try and right them with our triangular back end. we were skeptical at first because we had originally rode up on balls going backwards, and there were alot surrounding wildstang, but we moved our way over there and tipped them back up. amazing to watch =D.

Our robot was extremely stable, since about 100-110 lbs of its weight are centered in the base. The arm is made of 1/16" wall aluminum, which saves a lot of weight. Plus, all the motors that actuate the arm are also in the lower frame.

Our robot is UNTIPPABLE. It could be pushed over, but every orientation is right side up. look at the gallileo finals matches to watch us.