I want to be able to calculate angular displacement around a point factoring in translation and rotation and radius from a point. How can I achieve this?

What I am trying to achieve is below. 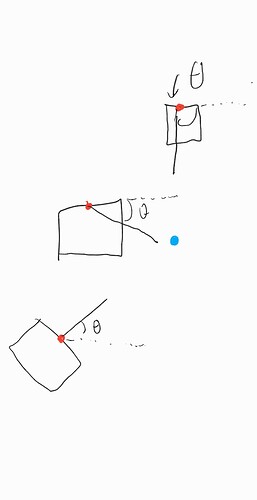 To accurately identify the vector (on a 2d plane) to an object relative to yourself, you need heading(angle relative to a known reference) and magnitude(distance). If you don’t have the angle, but know one of the component vectors, you can use sine/cosine (or specifically their inverses) to solve for the angle. Likewise, if you have the angle and a component distance, but are lacking the magnitude (straight-line distance), you can solve for that as well.

Displacement is simply the difference of your current heading (relative to that same reference) and the angle to that point.

I suspect this is related to a shooter angle based on camera/limelight feedback. Ultimately the math is the same, though