How to Not Break End Mills?

So tomorrow I’m planning to mill through two pieces of aluminum 6061-T6 2x1x1/8" at the same time. In other words, the bit will be milling 1/8" thick aluminum at least two inches below the end of the collet. One of our mentors expressed concern that this might cause too much torque on the bit, potentially causing it to break. When I milled these slots the first time, I clamped the two pieces together and milled through both of sides of the top one and the top side of the bottom one at once, and then flipped the pieces over, re-zeroed the DRO, and did the other side of the piece that was on bottom. Because of a mistake I made, the slots (and more importantly the center hole for the 1/8" drop on our West Coast Drivetrain) ended up slightly offset from where I wanted them. The error was enough that I am having to redo the pieces. The issue with that method at this point is time: It’s already the end of week 3, and while we’ve made good progress with mechanism prototypes, we still don’t have a working drive base. I’m started to get really nervous about the rate we’re progressing, and right now I’m the bottleneck that is stopping electrical and then programming from working with the drive base. Because of this, I’d like to get this done ASAP, and milling through both pieces at the same time will cut the time it takes in half because I won’t have to re-zero and realign everything to do the other side of the 2x1s. As evidenced by the mistake I made the last time I tried to mill these slots (I assumed the mill would be close enough to calibrated for what I was doing; it wasn’t. The vice wasn’t indicated and was off by about .4 degrees, which screwed everything up), I’m far from an expert on milling, so I thought I’d reach out to the Chief Delphi community for some advice.

My question is two-fold: 1. Is milling through both pieces of 2x1 aluminum at the same time a really bad idea that I should avoid at all costs? 2. Assuming this isn’t a terrible idea, what can I do to minimize the chance of the bit breaking? The obvious first step is to use lots of cutting fluid; I’m more wondering stuff like what speed should I be running it at? Should I be using a 2-flute or 4-flute bit? etc.

Our mill is a PM-932M with power downfeed. Our bits are made of HSS, and we have 2-flute and 4-flute bits.

Sorry for the kind of long post. Let me know if you have any questions or need any other info.

I’m likely able to get you in direct contact with one of my team’s machining experts. I’ll DM you.

There is a wealth of people here who will be able to help you, so I’m glad you posted! You’ll work it out.

Getting down an inch is a pretty substantial reach for tools less than 3/8" in diameter. What size is your end mill? I’d use a 2 flute or 3 flute if you have one. If you have the reach, do it all in one setup but rough out the top wall then rough out the bottom wall then finish .005 on both.

Oh, you want to go through two box tubes at the same time? Yeah I wouldn’t recommend that.

Assuming you’re using a vise, you don’t want to stack things on top of each other in a vise because you likely won’t get as much clamping force on 1 of them since they won’t be the exact same size. 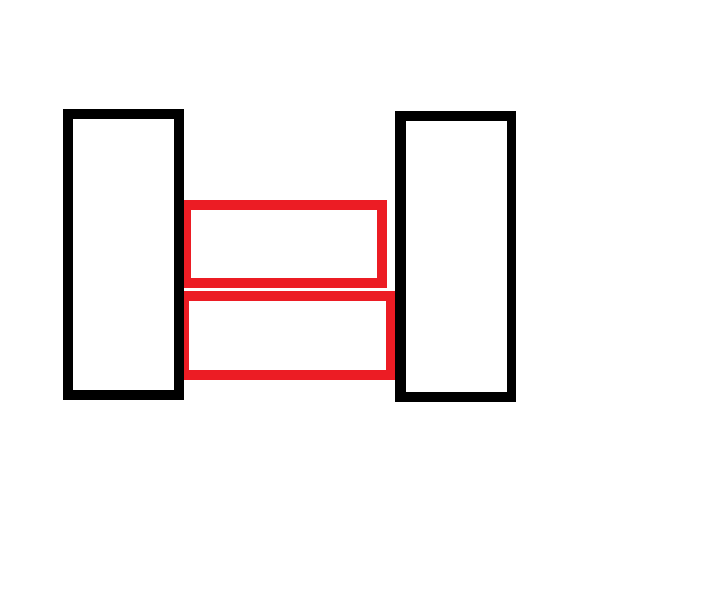 Here the black represents the vise jaws and the red represents the 2x1s. This is a bit of an exaggeration but I think it illustrates how you won’t get ideal clamping force on 1 of the pieces.

Seconded on not going through both sides at the same time. Definitely do NOT do that. It will be a worse result than your first run.

I DM’d you. Hopefully we can work out a good time tomorrow for my people to talk with yours about how to prevent the issue you had over your first run. We machined our WCD one rail at a time, rather than clamping both.

As someone who’s match-machined before, and who has a bad habit of using long endmills…

First off, you’re best off doing a jig if you can. @DRandhawa please make sure your people cover this in the discussion, eh? One piece at a time. Maybe even one SIDE at a time–with a jig that gets easier. The idea is to do one, then the other is in the exact same location.

Second, 2" reach from collet? I’d be very careful if those are small slots. If they’re larger then it’s less of an issue. If I HAD to do something like that, I’d go slow and careful on the plunge and feed.

Suggestion: DRILL the end holes of the slots first. Set up the two rails like you’re going to match-machine, drill the holes with a drill bit. Then you remove the top rail, use the drill bit to make sure you’re still lined up, switch to endmill, do one side. Flip the rail, line up endmill to hole, do the other side. Change rails, repeat.

Nope although I dont think he was the one who came up with this quote he just said it. A quick search showed that what he was saying was indeed the correct quote. The best way to do something quickly is to not take shortcuts that might force you to redo the part.

Most definitely. I plan to post the results of any discussion that will happen in the thread, either for the support for other teams or for general discussion in case we’re doing something wrong.

Yeah, I agree with not taking shortcuts.

Per my understanding, that quote makes no sense.

Apologies if I’m somehow misunderstanding this. I don’t think I am, but I’m always willing to be convinced otherwise.

Edit: Yeah, no, I’m standing my ground. I googled the quote too, and it seems like the quote is a caricature and mockery of the mentality that rushing delicate processes is vital when rushing to meet deadlines.

Aight maybe I interpreted it wrong but anyways…I would say just take the time to do things right the first time and things are more likely to go well.

Then we most definitely agree.

Per my understanding, that quote makes no sense.

Apologies if I’m somehow misunderstanding this. I don’t think I am, but I’m always willing to be convinced otherwise.

In The Real World, people often get pressured into “do this faster faster now now now why aren’t you done yet you lazy ____”. When the person being pressured does in fact go faster, they miss things. The part fails. OOPS. Now they suddenly have less pressure to do it right the next time because (well, HOPEFULLY–not always) the person applying the pressure realizes that they dun scrood up.

It’s generally used as a joke. AND a reminder–for some reason technicians have a habit of using the “wrong way” to remind each other to do things the right way. Example: I used to work on a crew that had some heavy lifting. Whenever we had a multi-person lift, there was a 50-50 chance that someone would say “Hey, lift with your back, not your legs”. That second you take thinking about that reminds you of the right way to do it, and you do it right (we’d immediately go into a crouch not a bend for the lift).

“Remember, there’s not enough time to do it right, but there’s always time to do it over”-- Oddly, it has a counter-effect. Because it doesn’t make as much sense, you think about it, and you start taking the time to do it right. Also, aimed at the pressurer, it’s a reminder to back off, shut up, and let whoever’s being pressured make sure to do a good job.

In many industries, there’s a saying or variant of a saying: “Better, faster, cheaper–pick two, on a good day”. (Aerospace adds “lighter” but keeps the number at two.) Do it faster, you’re more likely to have a lousy part, or you’ve added more cost (manpower, usually). Do it cheaper, you lose quality and likely speed. Do it better, and you’ll likely lose faster AND cheaper–except when “faster” goes too fast and you can’t use the part!

I appreciate this explanation and realize the merit involved. Thank you for giving it context beyond FIRST robotics. It seems to align with some of the stuff I read about the quote but hadn’t yet thought about in an industry/practical context.

One of our mentors has said this for a long time, and I took this at face value, pointing out that in machining it’s near impossible to get things right the first time

Wait, you people are already machining parts? It’s only week 3!

I’m just a college kid so you can take what I say with a grain of salt but I have spent a little bit of time in the machine as of late so let me try to offer some words of advice. First off, a go to rule I use for calculating cutting speeds is 4*(cutting speed of the material)/(diameter of bit) where the cutting speed is 200 for aluminum. So if you were to use a 1” bit you would want an rpm of 800. This is usually a good starting point and you can adjust from there so to get good chip loading. As far as the bit to use if you can, drill the holes with actual drill bits, but center drill them first. If this is not possible make sure you are using a mill bit that is able to center drill. Seems like you are because you’ve done this before. For the actual slot how much material do you plan on taking off for each pass? I would not recommend doing it all in one go. In regards to clamping and drilling the two tubes together, make sure they are actually the same dimensions or at least within your tolerance (they most likely are). I would not personally do this and would just take the time to re-zero (on a machined surface).

Do you have a source for this formula? I’ve never heard of it before. Usually the formula is: