Ideas for a demo bot

I was put in charge for building a demo bot to attract people to robotics and I am out of ideas.

If your 2006 robot was a shooter, you could always use that (assuming it’s still together). A machine shooting things always seems to attract people.

I know that some teams have built t-shirt canons. You might want to look into something like that, as well. You can just search for that here on CD, and you’ll see a number of threads.

What is wrong with the bot you built for competition this year?

As long as it can interact with people, any bot can be a demo bot. We had elementary school kids thrilled to have our robot give them tubes and take tubes from them.

What is wrong with the bot you built for competition this year?

As long as it can interact with people, any bot can be a demo bot. We had elementary school kids thrilled to have our robot give them tubes and take tubes from them.

Although both may be exciting, there are varying degrees of excitement. Personally, I think a 2006 robot firing poof balls into a crowd is more fun for the crowd than a robot picking tubes up from the front of it.

As for a demo bot, how about something that ‘juggles’? You could shoot balls up from one side, have them arc through the air, and be caught by a funnel on the other side to be recycled into the shooting mechanism.

if i get a summer job i want to build basically a tank that shoots tennis balls.

And a few more pictures when we took our a few of robots on our parade float:
http://www.team228.org/media/pictures/tags/dewbot

Check out this thread

Are any other teams making a showbot like to use for demonstrations? Rather than using a previous years robot

We had elementary school kids thrilled to have our robot give them tubes and take tubes from them.

We’re doing the same thing with our robots (prototype and competition). We brought both to a fair one of the elementary schools had, which we had sponsored for Lego League. Unfortunately, it was raining so all we had a narrow hallway to drive only the prototype around. The elementary school age kids had a blast just driving it up and down the hall and banging into the walls – it is kind of hard turning around, and the principal did it first, so there was precedent. Shoulda put the bumpers back on! The kids didn’t care they weren’t doing the tubes – they were driving a robot!

We did have one 3rd grader however that was such a good driver, and kept coming back all afternoon, so we let him pick up tubes and put them on traffic cones: one on the floor, one he had to raise the arm up to get a cone on a shelf. I expect him in the robot club in 6 years!

Oh, I was hoping for an invite to do a demo in the gym, and try hooking tubes on the basketball hoops (we didn’t bring the camera for trying an autonomous mode), but no go. It would have been fun driving the robot down that long crowded hallway to the gym, yelling out "Robot coming through!" 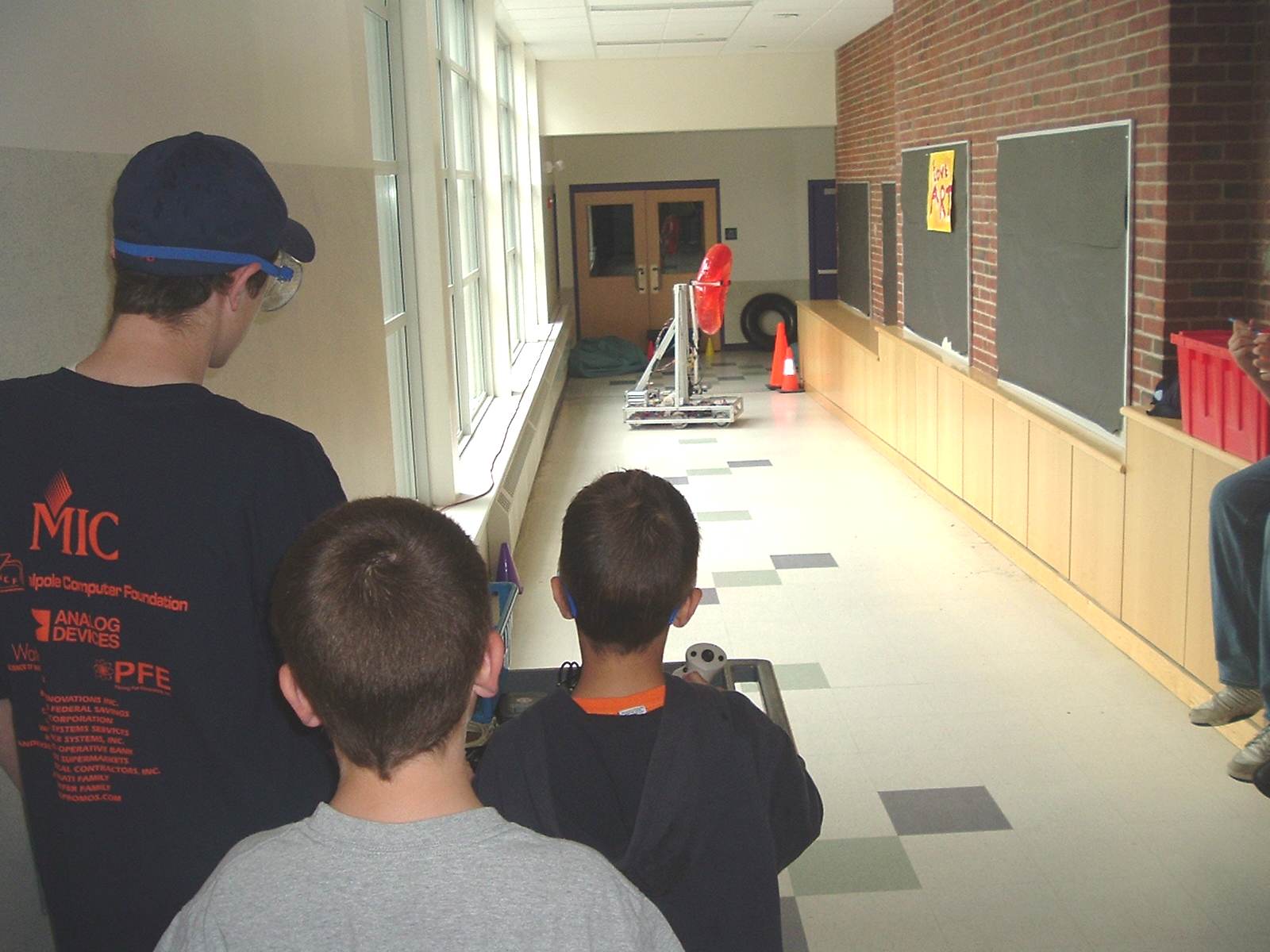 about the school demonstrations: they work. my high school team came to my elementary school when i was in gr 8 to show off the tetra robot. it got me hooked. mostly because of that demonstration, i am now obsessed with robots, and my first FIRST competition this year got me even more excited…the only problem is that im in gr 10, and our school didnt have a team last year because all of the gr. 12 left.

So far this summer:

>Take old kidde car (something like this one, though this one’s more modern than mine) and turn it into a goose chasing/remote control robot. Building my own control system from scratch, including Radio Control packet routines, operator controller, robot controller, and motor controls with video feedback, range of one mile.

>Build a 3-Axis cartesian robot for the manufacturing place I work at, using THK linear bearings/ballscrews, making my own frames. Using AutomationDirect SureStep stepper motors of various sizes for drives on the three axes, will have an envelope of about 36" X 24" Y 12" Z. The manipulator, when finished, will be doing vision inspection and ATE of electronic engine controls. Am designing and programming my own motion controller capable of simultaneous 3 axis motion and helical interpolation (never done helical before, should be fun! :ahh: )

So far this summer:

>Take old kidde car (something like this one, though this one’s more modern than mine) and turn it into a goose chasing/remote control robot.

I love it! What a great idea. We have a big problem with the geese here too…
Now if that robot was able to stand guard and sense when one of them is on the property and automatically come out to chase them you’d have something a lot of property owners here would line up to buy!

In fact I want to place my order for three right now!
Could you mount a BB gun to it too? :eek: j/k

If you’re looking to go the cheaper route, you can use VEX to make something small-ish. If you’ve seen any FVC robots, you know VEX bots can get to be a nice size, and it’s not that hard to get more parts in case it get’s screwed up. And VEX bots can pretty much be controlled by anyone. We took two to that Franklin Institute during their Family Fun Night, and all of the kids who picked up the controls loved it, even though they were just driving a squarebot across the floor.

It all depends on who you are attempting to entertain. Personally I am a big fan of big bots with a very cool mechanism. When I was in the 8th grade I went to the high school I go to now and saw our 04 bot. All it did was use a scissor lift to hang but, it was epic it was bright orange and it reached about 10ft in the air.

I think though something that is practical is always good. Something I wanted to always do was build a tee shirt shooter for pep rallies and the like. I though that if it was on an omni drive and had a cmu cam I could place a green light over the principal or and other guest and shot a tee shirt directly to them.

We are currently working on a new t-shirt cannon for our show bot. we had our 2003 robot as the cannon but the robot wore out. We used it at school events like football games and assemablies, and when we do things in the community, The Noise atrracts attension. As soon as the new one is finished we will post pictures.
I found that kids loved our 2006 robot. We would dump a hooper load of balls, out on the ground, and then kids would either push them back into the rollers or throw them into the hooper opening. The kids had a blast doing this, only problem was they started reaching into the robot for balls. But any kind of robot that kids can interact with is good for a show robot. Alot of people are just impressed with what you can do, so any robot can be a show robot.