I think @Nate_Laverdure started an important conversation about explaining the IFI situation to folks with no background on it.

I made this to help relay the relationships to some folks, and hope it helps you, too. 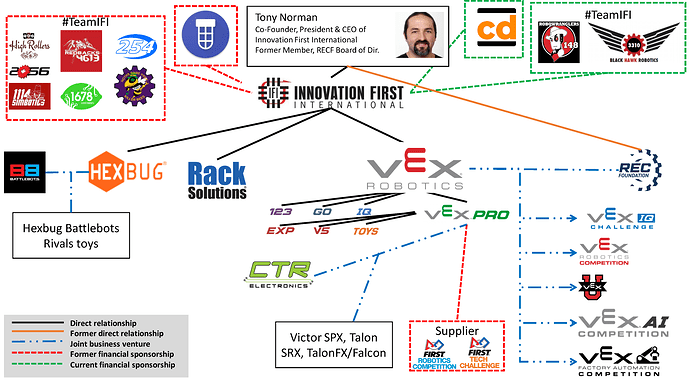 Corrections welcomed, but no promises of revisions

I’m not making any statements of support or condemnation of any of the brands/people/entities on the chart. I’ve expressed my thoughts on the IFI situation elsewhere on this forum. Please don’t infer anything based on the construction of the diagram.

Maybe this last part isn’t so true? I mean, it’s kinda weird to involve and call out teams in this type of thing when the intent behind the graphic is basically “hey you shouldn’t affiliate with this guy” and regardless of the key/legend at the bottom this certainly gives the impression that every team listed here is complicit and should be treated the same as IFI and their companies.

Stop claiming neutrality when this graphic itself is inflammatory in directly linking teams with something you’re trying to cull from a program. And that’s aside from the two teams that have an explicit and separate callout (and I thought we were all about “not faulting teams for their sponsors”) that certainly is trying to make a specific message in calling out the teams that haven’t severed their relationship with IFI.

Winning Olympic medals out here with all that jumping to conclusions.

There is/was a connection between VexPro and sponsoring a handful of battlebots teams as well, and Vex produces/d the VictorBB speed controller aimed at Battlebots applications.

Unsure if either of these are ongoing, but the battlebots subreddit indicates those sponsorships were gone prior to recent events.

The teams on the left side of the graphic have cut ties with IFI. The other two have not yet (likely for a variety of reasons)

Explaining how relationships fit together is mildly useful in these situations where it helps people be informed on their decisions.

Per several of the formerly sponsored BB teams, they stopped sponsoring teams a while ago, with the possible exception of Mutant Robotics.

Break 32, with Riptide also lists vex as a sponsor in the most recent season but those are the only 2, a far cry from the 12 of 2019

Your info graphic is incorrect. CTRE is a completely different company, yet you have them on the same level as VexPro which is a wholly owned branch of IFI. CTRE’s collaboration with Vex was based on Vex’s “engineering expertise” and suppliers that would be able to handle the mechanical portions of the motor controller manufacturing (or something like that).

Full disclosure - I’m friends with people at CTRE and seeing what this is going to do to them is pretty rough. I also worry about companies like WCP who utilize a large number of vex products like gears in their own products.

CTRE is a completely different company, yet you have them on the same level as VexPro which is a wholly owned branch of IFI.

I guess I should’ve included a “not to scale” note or something. I thought the dotted line, which they key explains, would’ve been clear enough. Sorry if this was confusing to you. RECF is notated the same way.

Yeah - I get it. I just think it would be clearer to everyone if the ifi companies are well isolated from the ‘companies who do business with IFI in some way’.

Either way, it’s a nice simple way to explain the interactions involved.

companies who do business with IFI in some way

Idk, maybe make the key larger or something.

BB and Hexbug are noted the same way for a very similar relationship.

RECF is notated the same way.

This shouldn’t be the case though. RECF and IFI are way closer together, with Tony sitting on the board of the RECF, and only really separate for tax purposes. CTRE is a completely separate company, with the only connection being the collaboration for the motor controllers.

Tony sitting on the board of the RECF

This part is new info for me. Maybe this will be notated in v2

I think this falls into the 'facts may be inconvenient, but they are still facts" category. If putting the connection on that sheet of a factual relationship between teams and IFI causes people consternation, perhaps that’s a sign of what those teams should be thinking about, and not a reason to criticize the graphic.

Copying some stuff in from another thread:

There are a lot of ways that RECF is tied to IFI. Notably, the board is mostly IFI-connected people:

GuideStar, for some odd reason, has the name of RECF’s listing as “THUNDERCHICKENS ROBOTICS CLUB INC”, despite other information about RECF being correct.

It also shows the Board of Directors as empty, but “Self-reported by organization” on 10/12/2022. It’s odd that the list of directors appears to have been emptied right before all of this started coming out.

The name thing alone is really strange, but the board of directors is even more odd.

The RECF used to be known as THUNDERCHICKENS ROBOTICS CLUB INC, prior to a name change in 2010 to the now-current name. The company was originally founded in Michigan in 2003, as the nonprofit parent organization for FRC217.

I think the RECF board connections should be included in this chart.

Not sure what to make of the Thunderchickens stuff.

The former history of RECF being the Thunderchickens is interesting, but I don’t really know the details. I’m also not sure if it’s relevant to include in the chart in any way.

I don’t know if there are any other relevant connections to the Revolution Robotics Foundation.

Oh man I am not looking forward to how this post might be received but here it goes:

I am going to be honest including the teams who severed ties with IFI on this graphic doesn’t sit well with me. Especially since they all announced their departure before IFI made their response. I am many steps removed from the C-suite employees of the company I work for and have little knowledge of their activities, let alone the internal activities of the core sponsors of my team who I do not work for. This is not even to take into account that one of these teams is literally on the other side of the planet. Having them on this graphic is at best shaming them for something they had 0 control over. If it was just to provide “historical context” why not include teams like 111 or 217 who also were former Team IFI but separated for different reasons?

I also am somewhat conflicted about the inclusion of 148 and 3310. They are definitely the two teams who even before this were the most directly tied with IFI and are going to have the most trouble in navigating this situation. We have already said in multiple threads how we will not judge other teams financial situations or continued uses of Vex products and I do think, although this may be an unpopular opinion, 148 and 3310 should be given this same courtesy especially since we are not that far removed from all of this information being made public. Now in a few months if all of this remains the same and we see pictures of giant IFI banners in their pits and they are trying to recruit students to IFI/Vex internships, different story call them out. But seriously milk I bought before these stories came out hasn’t gone bad yet let’s not expect teams to be able to sever in one case a very serious and complicated relationship quickly.

I see where you’re coming from, but it seems to me that anyone seeing this graphic will have read into the situation prior. If that is the case, they’re probably aware that these teams did sever ties, and this just adds a descriptive visual to help comprehend the situation. I didn’t ha zero knowledge of IFI’s structure prior to this week, and in my eyes this doesn’t vilify the 7 teams who left at all. Also, both groups with red outlines (FIRST and those teams) left before VEX made a statement (FIRST seemingly left over a year ago).

I do more agree that the situation with 148 and 3310 is unfortunate, but I think for the sake of clarity, they’re probably better to include.

Edit: I’ve posted down below after rereading the context of original post.

because people ARE judging them, whether they admit it or not, there wouldn’t be people making checklists of which teams had and hadn’t yet condemned IFI.

I see where you’re coming from, but it seems to me that anyone seeing this graphic will have read into the situation prior.

Seems like a bad assumption. I would hope anyone sharing a graphic like this would include additional information and details to highlight the situation, but we can’t be sure of it. Many people don’t read CD regularly, if at all. Can you imagine the reaction at competition of something like this being posted up or handed out with incomplete word of mouth information about the situation going around? You’ll have a ton of students, even teams, who look at it and see teams listed and make judgements.

I’d prefer to see teams off the table, or perhaps more generalized - instead of listing them specifically, there could be a generic “TeamIFI” box with a label specifying that 7/9 have rejected sponsorship this year. That gives the teams the benefit of the doubt and the ability to tell their own stories. Even 148 and 3310 can determine to what extent they want to advertise their relationship with IFI, if they don’t end up rejecting sponsorship as well. Keep in mind, we haven’t heard a clear statement from either team yet. I’m willing to give them the benefit of the doubt and assume that they are having some very difficult conversations right now.

I guess I probably should’ve read this as sharing outside of CD. For whatever reason I was just thinking of it as a thread that would be available to be read through as more of a to-the-point item. Reading back, that makes no sense with this sentence

“about explaining the IFI situation to folks with no background on it.”

Edit: added dashes to “to the point”