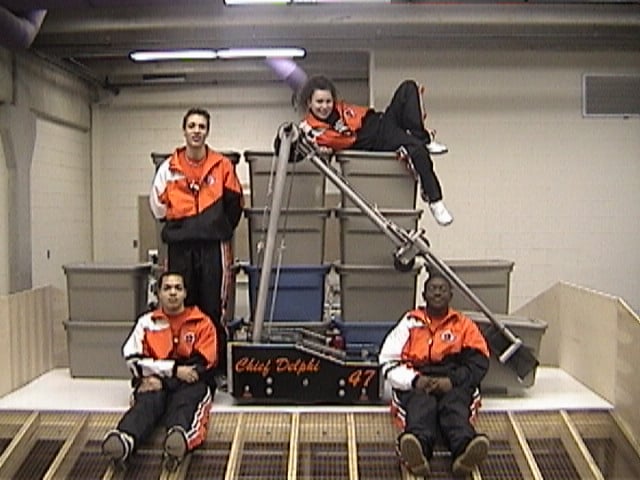 Well gang here it is, Raul, Beatty and all other curious others enjoy.

Not at all what I was suspecting…

::ADD::
That arm looks like it could kill someone, or do some SERIOUS damage
::ADD::

nice…I assume that the arm can orient bins and stack them pretty well. Now hopefully wildstang is gonna hold their end of the deal and post something tonight.

It’s true this year. Autonomous mode will most likely decide a match. If your auto code works and you can get up the ramp fast, you can control bins. It looks like 47’s arm is meant to swing from the start box into the stack without having to go up the ramp. That’s probably the fastest device at a competition. If it does swing from the start, then I have to wonder what else it does during the match.

…our machine is somewhat simplier than in past years. We will see if simplier is enough or simplier is too simple.

Bottom line, we fit in the box, made weight and we do pretty much everything we planned on doing.

Time will tell if we planned on doing enough or if we can work in new plans as needed.

Regardless of how the tournaments pan out, I am pretty proud of our team based on both effort and output.

*Originally posted by Stephen Kowski *
**Now hopefully wildstang is gonna hold their end of the deal and post something tonight. **

An excellent machine as always, Team 47!

Finally a CD robot that doesn’t try to do everything! The more simple it is, the more reliable.

Just one question, does it have a swerve drive?

I can’t wait to see this robot in action.

Muwha it looks great! Maybe someone from their team wants to come and explain it… heh heh

Hehe… I bet I know what it does… but I won’t tell. I will say I’m very interested to see CD8 in action. Your strategy looks very promising. It’s one I thought up at kickoff, but didn’t get to use. I can’t wait to see you guys play!

seems that they will also be able to clear a scoring zone real easily, if they have omni wheels all they have to do is lay down the arm and drive sideways

Just a problem with a robot like that at the SCRRF sectional. Our alliance partner had a robot like that, but while swinging in the crowd it narrowly missed the commentator and was disabled for the rest of the match. If an arm is extending that far, it could definately be considered a safety hazard.

thats like rage in 2000 i believe, they hit a camera man in one of thier matches. correct me if i’m mistaken but i think thats what happened

*Originally posted by Joe Johnson *
**…our machine is somewhat simplier than in past years. We will see if simplier is enough or simplier is too simple.
**

Simplicity is the art and beauty of complexity.

I don’t think that Raul’s deal will ever be met. 71 has never posted their robot in the past and I doubt they will this year. We don’t even know if 71 knows we want them to because they have not responded in any way. Therefore if for some reason 111 would still be willing to post their pictures I am sure the rest of us would be appreciative.

By the way, like all other pervious CD bots CD8 looks great. Good job on following the best design advise ever, K.I.S.S

I sure would like to see what makes that beast move.

Hmm looks interesting. I would really like to see a team that can successfully knock down bins from their starting postition… if they can accomplish this, it will be a dominant machine.

However, I know that we calculated that to knock those bins over would be applying thousands of inch-pounds of force at the very end of whatever is being used. Basically it would be hard to do such a thing quickly without breaking… a broomstick would most likely snap in half. The only thing that I could think of doing is extending something out, and driving under the bar so everything hits at the same time. If that CD can indeed pivot, then that is possibly what they are doing.

::enough speculation:: Everyone wait till competition, should be a good game this year.

*Originally posted by Scott Garver *
**71 has never posted their robot in the past and I doubt they will this year. **

On the contrary, if memory serves me right - at least in 2002, I seem to remember another year as well - Beatty has put up a single picture on their website (or linked it here) with no further explanation…

But that is off topic a bit, so I’ll also say this:

I have a feeling that Joe Johnson’s idea of simplicity is more complex than others’ idea of simplicity. Call me paranoid, but my guess is that there are at least 10 surprises packed into CD8 that only a competition (and furthermore most likely finals – anyone remember 2000 - Great Lakes, CD5 stealing the black ball for the first time - and the entire arena gasps…an then goes NUTS) will reveal.

Also, if the Chief can do SO FREAKIN’ AWESOME when they try to do EVERYTHING in a game (as in past years)…

is anyone else afraid to see how scary they are when they concentrate on just a FEW things???

I wouldn’t count on 71 posting. Some of their members are eager to post pictures but have been told not too. This is according to a conversation with a member of 71 over AIM.

Like many other bot’s, they like the surprise factor of showing up at a regional with something nobody has seen.