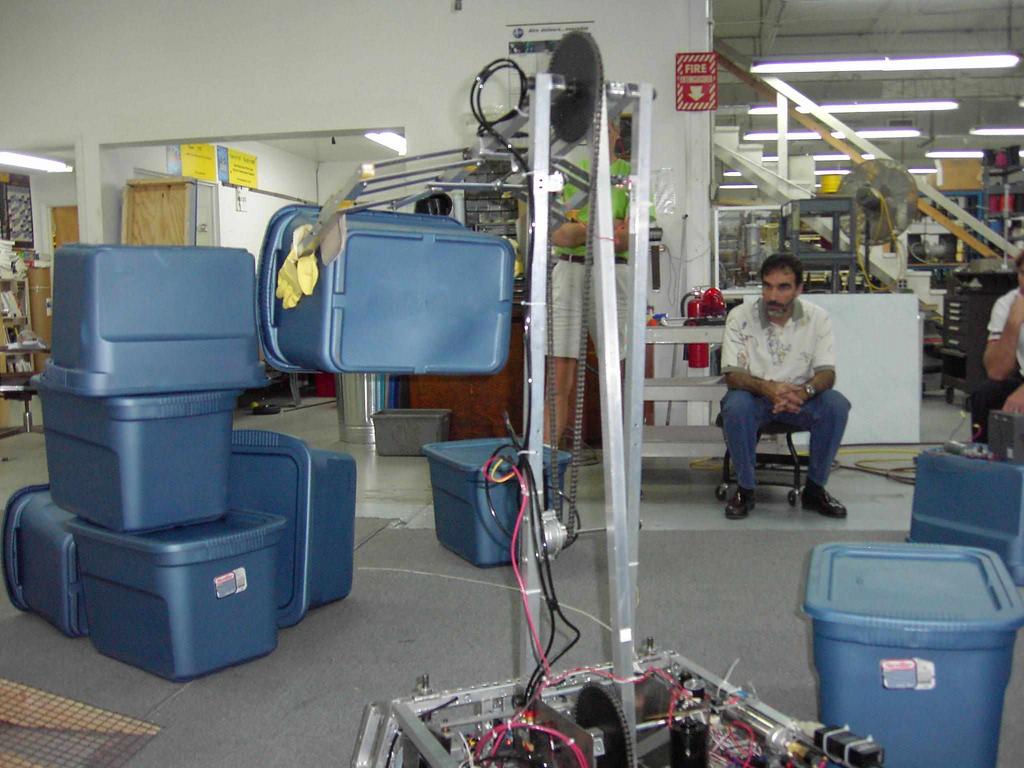 Stacks up to 6 high, within seconds. Extremely accurate clamp which grabs boxes in a fraction of a second
abeD February 20, 2003, 12:03am #2

What do you guys think, but before you reply let me tell you that we have 4 wheel drive 2 wheel steering (with the cim motors) the arm is double jointed with a rotation at the base and the clamp is done pnematically, and all the cool lexan covers arnt on it yet(those pics will be up later!!) Please drop a comment on what you guys think of it:D

Does your arm orient the boxes? Or does it stack it however it picks it up? In your pic you’ve got boxes stacked every which way, adds up to some wobbly stacks if you ask me…

Wobbly stack or not is not a big deal a stack isnt gonna be moved even if it is stacked in different directions, even if ur stack is perfect or every which way when a robot crashes into it there gonna fall

Not necessarily… there are ways to “strengthen” your stack, for example the stacks we will be making barely move at 8 high.

… besides, when you have boxes stacked like that it limits your max height of boxes. If you have them all aligned perfectly you can go much high as you don’t have to worry about balanching your stack because the last box is about to topple your tower.

Although you can grab and stack from any orientation how fast can you do this. What is your strategy if a rampdom gets in your way?

We can go under the bar, and our strategy isnt soley based on stacking, we can also grab onto a stack and move it wherever

You can go under the bar?!:yikes:

Looks cool, and similar to my teams robot. vector drive, arm stacking and can go under the bar! Even looks similar, but i think our arm is 2+ feet longer

*Originally posted by COOPERcable *
**Not necessarily… there are ways to “strengthen” your stack, for example the stacks we will be making barely move at 8 high. **

if u mean u have some sort of stabilizer than yea, of course, but still, if ur not there, ur stack is vulnerable…and even though i havent seen ur bot, i am pretty sure it is possible to knock it down if a bot tried hard enough(just assuming, but i could be wrong…i havent seen it so i really dont know

well the coolest thing about the way we grab is that we can stack in any which way very quickly , and when we grab the boxes lengthwise we can manipulate it to turn within the grippers sliding into place a lot of times

The robot arm is pretty easy to control after you play w/ it for an hour. After becoming coordinated w/ the robot driver we became able to stack pretty well. and it is really cool to just grab a stack of 6 and drag it over the ramp onto our side, sure the stack falls over, but we still have the top box clamped and ready to stack.

Before we put pnuematics on the clamp, we had this nifty system of pulleys, too bad the engineers didnt think it was reliable, i had to cut about 4 pieces b4 i got it right, and now they aren’t being used anyway.