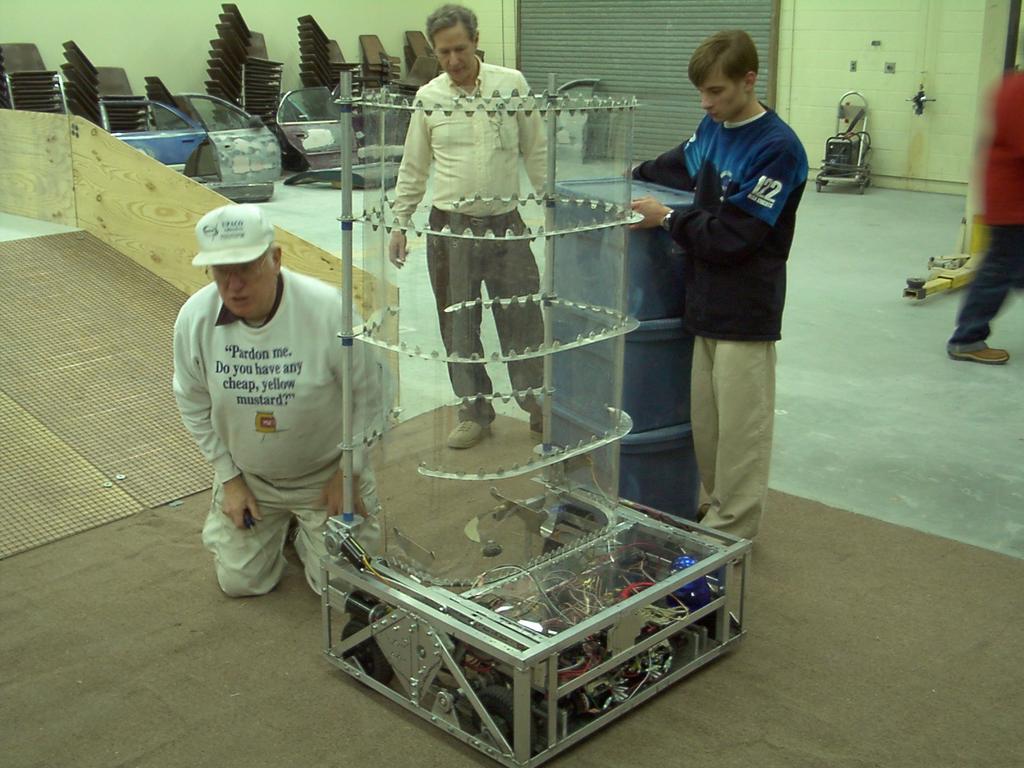 Well, here it is. We have manipulators in front to orient the boxes, a lifter inside to stack crates, doors to open and close so our stacks don’t fall over on the ramp, and a couple nifty features mysteriously vacant (they were being frantically worked on while this picture was taken :)). Any questions?
Kyle_Fenton February 23, 2003, 4:42pm #2

Cool design, there are only a few designs that I’ve seen that can protect the boxes, and move them, while they stack.

Thanks for the kind words!

To tell you the truth, our lifter was expririencing problems when we shipped, so we haven’t actually moved a stack over the ramp … but we hope it works

We also have a ramp blocker, king of the hill unit that isn’t attached right now. If you look closely you’ll see some wires that aren’t attached to anything … that’s what they are for.

What are the Chiaphuas driving?

The chiaphuas are in a gearbox with the worm gears, and they drive the manipulators which orient the boxes. It’s hard to see in the picture, so let me explain the manipulators. One side swings to contact the low side of a crate, and the other swings to contact the high side of the crate. The one which contacts the high side has a rubber wheel (off a roller blade I believe) which through empirical testing helped us flip crates. We re-designed the manipulator 2 nights before ship day to be made out of lexan so that it could bend and touch the boxes at a higher position to generate more torque, but still start off low enough to go under the bar. The manipulators allow us (hopefully) to rotate crates around so we can pick them up, and also to bat crates against the wall or field barrier where we want them.

Nice, us alumns out in Bburg have been waiting to see this one for a while. Did I read correctly that you can go under the bar? Does that whole polycarb chimney rotate down 90 degrees? If so, for Bill and Ansel’s next trick are they going to turn water into wine? Don’t suppose we’ll get to see any vids of it loaded before VCU. Just curious, do i see its only driven by the drill motors? Roughly how fast is it this year? Last question, does anything extend upward from that chimney to secure a stack that is more than 4 or 5 boxes high?
Sorry for the bombardment of questions, but somethings gotta help me put off working on my Finite Elements Analysis take home midterm.
~Scott

You read correctly, we can go under the bar … just not in this configuration. We can easily remove the “chimney” as well as the ramp blocker (not shown in the picture), and go into the match in our “under the bar mode.” And if we could turn water into wine, I’m sure Mr. Wooward would be ontop of that

You are correct, we have two drills as the only drive motors. We use two servos to shift gears, and in high gear we are a little over 6.3 feet per second. Fast enough that we had to get Mr. Fahringer to waterjet some heatsinks to save our poor motors

And nope, we can only support 5 crates high with our chimney … we use every single motor in the kit, so it’s not like we could have easily made an elevator mechanism even if we wanted to

(well … we could have had a passive ratchet-like mechanism I suppose, but 5 high is good enough for us).

And since we didn’t get any practice time on the 'bot, I’m afraid we don’t have any video to share.

Can’t wait to see team 401 in Richmond, especially since I’ll be a Hokie next year!
Stephen

Is the sweater supposed to be some sort of joke? LOL because I don’t get it. -_-

Is the robot not able to go under the bar with the plastic stacking feature? What is you robot’s strategy if you were to take it off?

*Originally posted by kristen *
**Is the sweater supposed to be some sort of joke? LOL because I don’t get it. -_-

Is the robot not able to go under the bar with the plastic stacking feature? What is you robot’s strategy if you were to take it off? **

“Pardon me, do you have any cheap, yellow mustard?” - lol

Thanks for the complement on the shirt. We got new shirst this year, so they’re kind of a big deal for the team. Especially since they cost 25 dollars a piece! (/me goes and grumbles some more)

And I’ll pass on your comment on Ansel’s sweater. We all love his yellow mustard sweater!

I think I overheard him say it had about a pound of aluminum in it now, so he has to have it cleaned (talk about being commited to FIRST!!!)

You are correct Kristen, we can’t go under the bar with the lexan chimney on. If we take it off, we can still lift crates, we just have no support for them. We would use this mode to go against certain types of robots. For example, if we are up against a dominant king of the hill robot, and there’s no hope of moving him, we would go with this and use our under-the-bar capability to shuffle the score around. Also, if we were going against a robot like 179, or one that starts by swinging an arm and knocking over crates, we’d start in our under-the-bar-mode, and begin by ramming into them and ruining their strategy (hopefully).

Can’t wait to see ya’ll in Richmond, and make sure you drop by our pits to see our poor-man’s segway! Perhaps by then we’ll finally get a gyro on it (although I doubt it).
Stephen

im lovin the design!!! it really looks like it will do its job and do it well!!

and yes that shirt does rock!

*Originally posted by kristen *
**Is the sweater supposed to be some sort of joke? LOL because I don’t get it. -_-

Is the robot not able to go under the bar with the plastic stacking feature? What is you robot’s strategy if you were to take it off? **

Years ago, there was a commercial where some rich dude would pull up in a limo and ask the car next to him, “Do you have any Grey Poupon?” It’s some kind of fancy French brown mustard. 'Scuse me if I spelt it wrong.