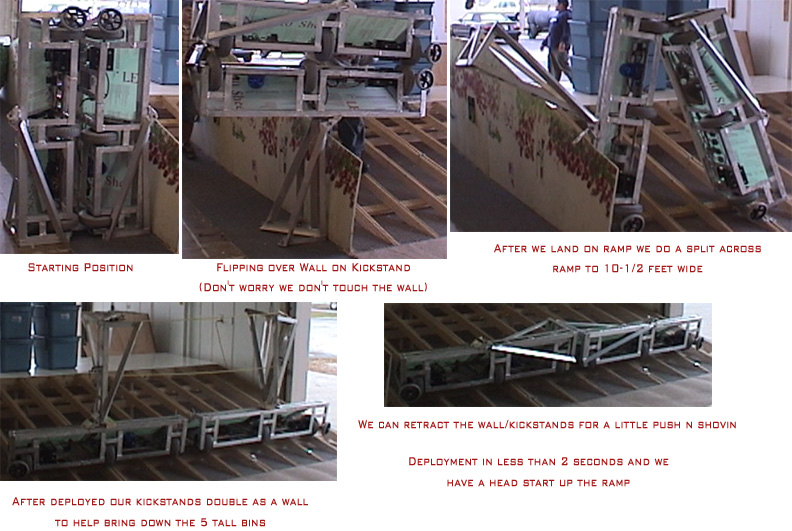 I warned them this would be hard to do but they were willing to take the risk :-p (Our kids are the best- but so are yours) We’ve been driving it for a week now and it works great. We’re just waiting on our pistons to be deliverd and a little decoration to wrap it up. We hope to have a LOT of FUN with all of you this year! Go FIRST!!
Gadget470 February 8, 2003, 7:48pm #2

This was the first time I’ve ever (out loud) said “oh wow” when seeing a bot. Amazing

i’m gonna have to agree with the previous statement…

Absolutely brilliant. Amazing. Unconceivable. Never even thought about it.

Four thumbs up to your marvelous bot

We thought of doing it, but decided against it.
I’m curious to see how effective it will be for you guys.
Please post more pictures/videos as soon as you get them.

This is an awesome design. The concept took guts to go forward with it.

This concept came up in our team’s discussions, but it was pretty much laughed about… we didn’t think it could happen.

to quote Beavis and Butthead: “This is the coolest thing thing I have ever seen.” That is absolutely amazing. Congratulations.

I’ve got almost my whole team standing around me … all going “Wow.”

Very nice! I congratulate you and especially your kids for putting in the work neseccary to create such a device. Very impressive! I hope to see you at a few regional competitions!

Hey guys, its Matt, up at Cornell. Congrats, you actually pulled it off. When I told my new team mates what you guys were trying to do, most laughed and said you never could (and part of me agreed). Well, looks like you guys showed em. Good luck at competition.-Matt B, 179 Alumni

What happens when you guys get spun and you guys cantilever on the HDPE?

:eek: <-- is the very best I can do… I can only imagine how cool that will be to watch: very creative.

Thats so sweet I can’t use the explatives I normally would. The wedge in the front is a nice touch but what if a low rider hits you in the back?

First our team, then the robotics engineer and another mentor, then a visiting rookie team,

I know most of you hate people who only post short little segments of stuff but I think this picture calls for something to that effect, so here I got with my responce:

i hope you guys are goin to nationals this year, cause in my book, you gotta be one of the front-runners!!!

hmm… thinks to himself i wonder if the 2 Pratt teams could ally for the UCF champs this year… and would they ever pick an ex-spammer’s team to help them out? only time will tell…

best of luck this year guys!