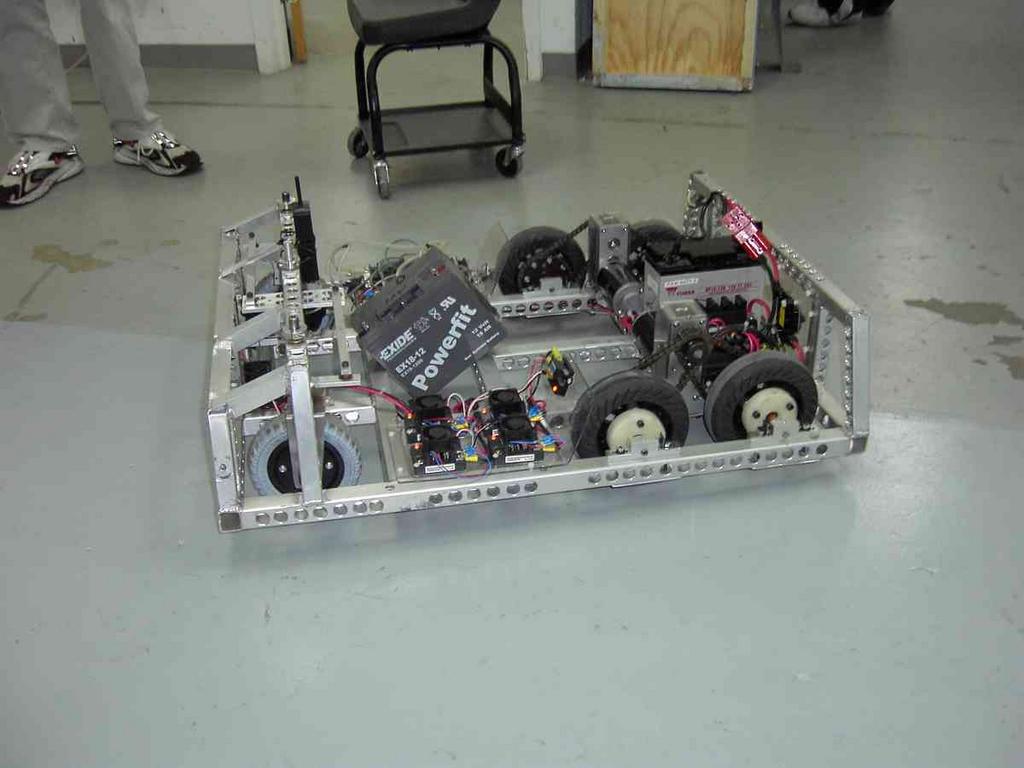 is the battery mounted where it’s going to be?

if so, is that legal?

If you look closely there are two batteries. The one in question was probably used as a 14 pound weight.

Those go-kart tires are the exact same ones our team is using! and we have castors in the front and a welded aluminum frame too! I’m assuming those are castors, are they steerable? they look like they have some sort of a connecting rod.

Good luck at the competition(s).

by looking at it both questions here are answered.

The battery without any connections on it would be legal where it is even if it were to be the power source. Battery’s can be in any orientation.

The front (grey) wheels are large casters. They have a shroud above them attached to a free motion point for swiveling.

Nice bot (I have a strange attraction to robots with six wheels:D )

Is this the the complete robot or are you still going to add arms, or wings, or cannons…

I checked 710’s website under pictures for this year and it says "Top Secret Build Photos (ACCESS DENIED) ". What are in these mistery photos, the same as on Chief Delphi. Do tell, Do tell.

LoL, My Bad I don’t know why Pete posted that picture, Thats a 4 wheel drive in the back and 2 wheel steering in the front we have the arm mounted just not a picture of it loaded up

our bot does about 9 ft per second and its pimp as anything, I’ll get some pics loaded up so you can see it real soon, sorry about the team710.com classified some of my team members like to keep an air of secrecy but ehh I don’t really care if everyone knows

We get up the ramp in 2.5 seconds in autonous mode, and our lexan covering will be pretty dang pimp

thats all for now I’ll get another pic loaded up

hey guys ya pete put up a bad pic of are robot thats one of the first i am that guy taking all the pics i have all them save on my computer i will get you a good one in a latter post and in reply to your queston on are webpage all pictures will be albe to be seen on tuesday its mostly the mentors that want ot keep stuff secret but we will answer basically any questio:)

But I’m curious, what kind of traction can you get with six wheels?